Breaking: a woman can be rich and empowered and naked — without permission from concern-trolling men 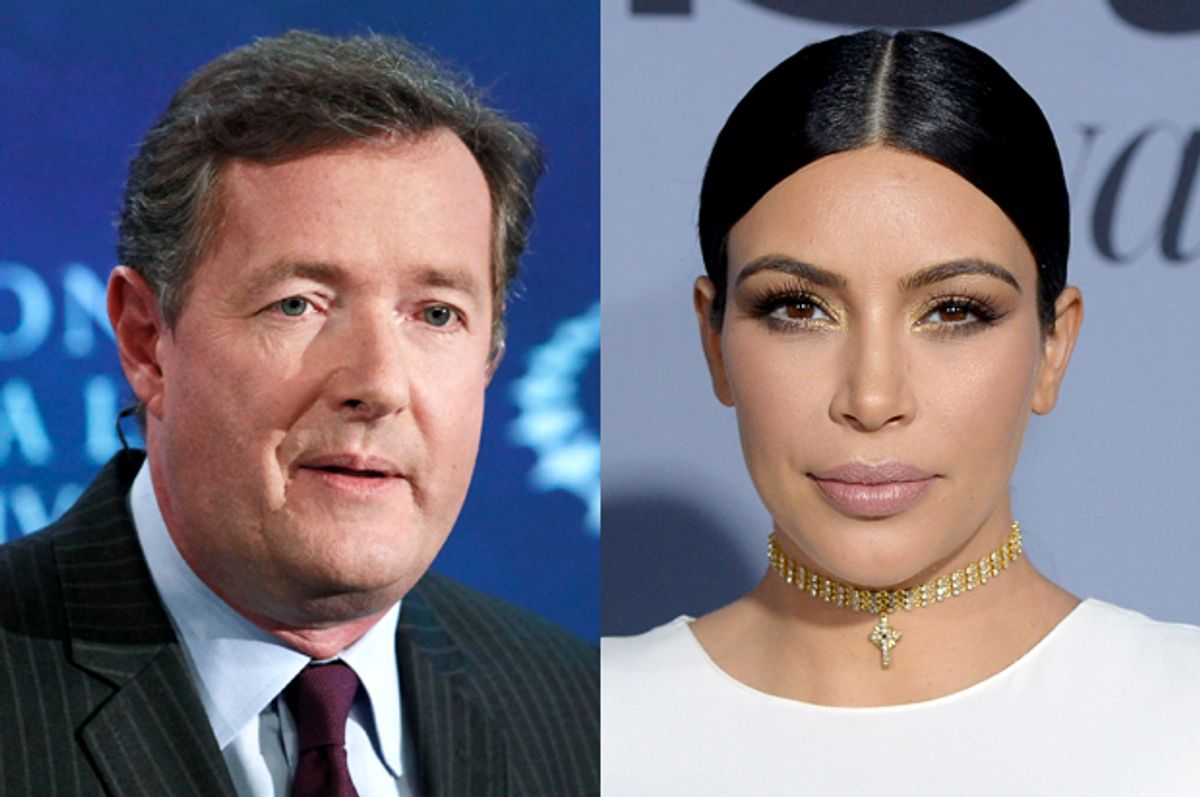 I'm so sorry to do this, but I'm going to talk about Piers Morgan now. I know, I know. And were he not so head scratchingly typical of a particular kind of facile, "The several decades of feminism just went totally over my head" way of thinking, I wouldn't mention it either. But he is, so let's unpack.

Let me take you back, back in time to earlier this month, when Kim Kardashian — a woman who knows how to get attention and who absolutely knows that taking off her clothing is a surefire way to do it — posted a selfie on social media, showing herself in her bathroom and clad only in two discreet black censor bars. The image quickly lit up the Internet with a fair amount of predictable concern and outrage. Chloe Grace Moritz warned that "I truly hope you realize how important setting goals are for young women, teaching them we have so much more to offer," while Bette Midler cracked that "If Kim wants us to see a part of her we’ve never seen, she’s gonna have to swallow the camera."

And Piers Morgan, who last month griped that Susan Sarandon was being "very tacky" for wearing a low cut ensemble to introduce the Screen Actors Guild Awards' In Memorium segment, tweeted to her that "I know the old man’s $50 million in debt, Kim but this is absurd. Want me to buy you some clothes?"

Kardashian, having none of it, retorted, "Hey @PiersMorgan, never offer to buy a married woman clothes. That’s on some Ashley Madison type s__t. #forresearch"

Which brings us almost to the present day. Earlier this week, Kardashian posted yet another revealing selfie, a black barred homage to the earlier one but this time only from the waist up. And the middle finger up. And next to an identically posed model Emily Ratajkowski. As Kardashian's husband says, take that, haters.

Surprisingly no one, the sight of two women who happen to look ridiculously good without clothing once again hit the Internet like a grenade. It currently has well over a million likes on Instagram. And once again, Piers Morgan is peevish. "If women genuinely think this photo advocates women's rights & equality, then feminism as it was intended is dead." he expanded, saying, "Well, if Tom Hiddleston began tweeting endless photos of himself topless & flicking the bird, would everyone find it 'empowering' or tragic?"

To which I say, the only way to know for sure is if Tom Hiddleston texts me the pics.

Morgan, who first made his name as an editor in the Murdoch tabloids and was cancelled by CNN two years ago went on to explain, "Kim/Emily aren't posting these photos to 'empower' women in the cause of feminism. They're doing it to make money….I love women & 100% support gender equality. But pretending that topless bird-flicking selfies promote feminism is ridiculous. ...I like @KimKardashian but she'd be so much more empowering to women now by proving she can succeed with her clothes on & middle finger down." Yes! It's so much more empowering to women when they do what men tell them to!

Morgan, by the way, is a longtime Kardashian concern troller. Last year, after Khloe Kardashian's estranged husband Lamar Odom found unconscious in a Nevada brothel, Morgan lamented that "dignity and reputation are already dead, shredded at the altar of reality television." And Piers Morgan lecturing about dignity and reputation is about as farfetched as Piers Morgan lecturing about oh, feminism.

I must have missed Kim Kardashian's symposium on feminism, because her recent Twitter feed is mostly product placement and self promotion. But also who cares? You think it's not feminist to make money? You think it's not empowering to make your own choices, whatever the sad middle-aged white guys in the media think? I'm not a Kardashian fan, but feminism isn't about fan girling, or everybody making the same choices. And you can be rich and empowered and naked at the same time, and anyone who "supports gender equality" would know that.