Flying while Muslim, family edition: Mom says airline's "safety issues" had to do with "how we look" 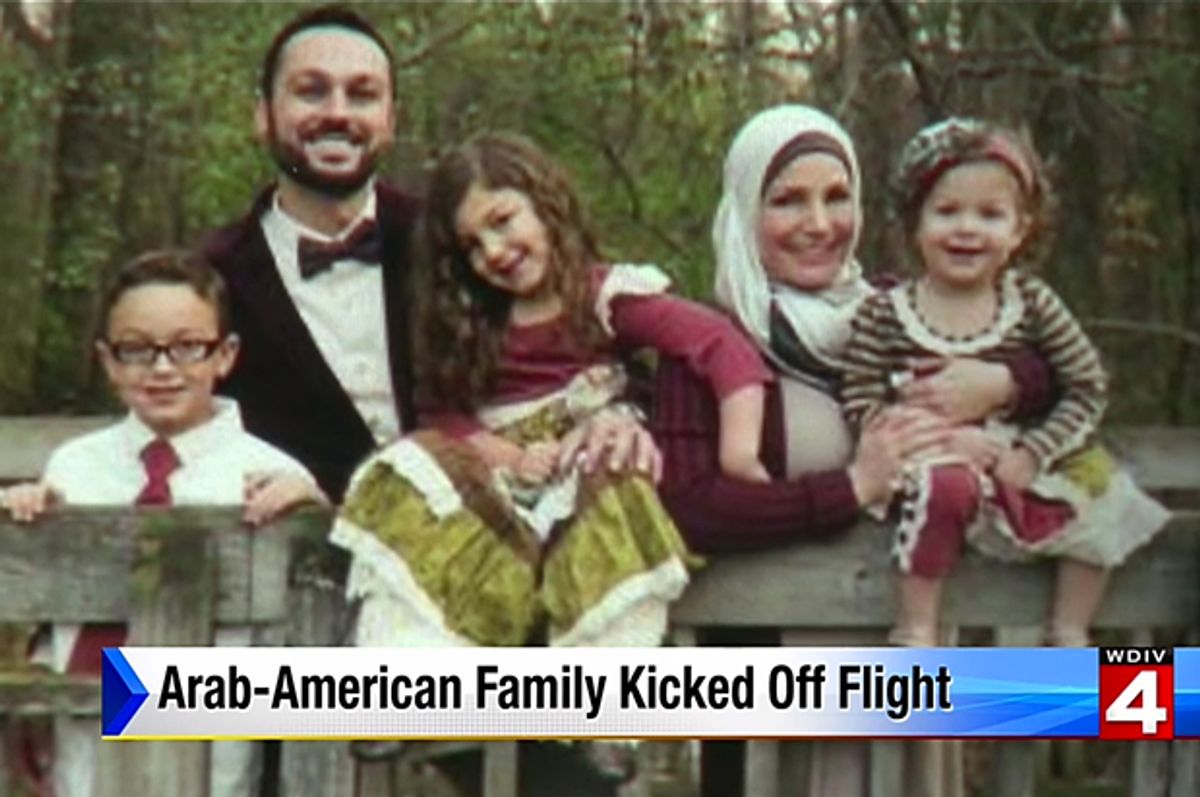 Ever since 9/11, the threat of terror has become such a convenient excuse for straight up paranoia that it's hard to tell what's legitimate concern and what's just everyday racism. And in few places is that more evident than up in the skies. This week, Illinois mother of three Eaman-Amy Saad Shebley went public with her story of how she says she and her husband and kids were kicked off a United flight to Washington D.C., "no reason other than how we look." But is that what happened, or was it simple issue of seating safety?

In a March 30 Facebook post she encouraged to go viral, Shebley wrote, "Shame on you #unitedAirlines for profiling my family and me for no reason other than how we look and kicking us off the plane for 'safety flight issues' on our flight to DC for the kids spring break. My three kids are too young to have experienced this. SHARE so that we Americans stand together to stop discrimination. Everyone please SHARE via Facebook and Twitter.... Hashtag #unitedAirlines #discrimination It's definitely a trend with #Unitedairlines flights from Chicago to DC, remember #TaheraAhmad."

She was referring to the young Muslim chaplain who last year had her own issues with United. Back in May, Tahera Ahmad claimed she was wearing her hijab when she asked — for hygiene reasons — for an unopened can of soda from a flight attendant — and was refused when the woman told her, 'I just can’t give you an unopened can, so no Diet Coke for you'... We are unauthorized to give unopened cans to people because they may use it as a weapon on the plane." She claimed another passenger then jumped in to the fray, telling her, "You know you would use it as a weapon, so shut the f__k up." A few days later, the airline issued a statement that "Ms. Ahmad was our customer and we apologize to her for what occurred on the flight. After investigating this matter, United has ensured that the flight attendant, a Shuttle America employee, will no longer serve United customers."

In her post, Saad Shebley shared two videos, one in which a flight attendant asks the family to deplane, and another in which the captain does. When asked why he's removing them, he says, "Because it's my decision." She volleys back, "Is it a discriminatory decision?" and he tells her, "It's a safety of flight issue."

Shebley told a local Detroit news station this week that when they boarded, she asked the flight attendant about five-point harnesses for the children. She claims the attendant said she didn't know what she was talking about, and the family was removed shortly after. Later, she says they worked with customer service and were rebooked on a later flight. United says that "We rebooked them on a later flight because of concerns about their child’s safety seat, which did not comply with federal safety regulations. Both United and SkyWest hold our employees to the highest standards of professionalism and have zero tolerance for discrimination."

It may easily have been a case of needing the children in safer seats, and those short videos don't tell much about everything went down and how it was communicated. The captain's terse "It's my decision," which sounds dismissive and snotty, may have been bookended by a fuller, more sensible explanation. Not every single flight safety choice is automatically about the fear of terrorism.

But when you consider that last fall a "Middle Eastern looking" guy got kicked off Spirit Air when "concerned" passengers saw him watching a movie on his phone, or that in January a Sikh mother claimed she was delayed from boarding a Delta flight because her breast pump alarmed a male traveler, I'd go ahead and ask if you hear a lot of stories like this involving white people. Six years ago, an entire Muslim family of eight was booted from an AirTran flight when fellow passengers misinterpreted their conversation about which seats were the safest. This doesn't happen to everybody. And if you're still unconvinced, you can read the comments on Shelby's Facebook page, which include observations like "They are getting kicked out, for all I know they probably screamed 'Bomb','" or "Was the lady being loud? I would like to hear the entire story before passing judgement. I would NOT want to be seated near someone who was chanting or moaning or grunting or praying out loud. So I applaud the airline if that is the case." So even if the problem, this time, wasn't about the skies, it's pretty obvious we still have a long way to go in educating people about their fellow Americans, right back here on solid ground.