The same week, Amy Schumer fired back at Glamour for their "not cool" surprise plus-size feature 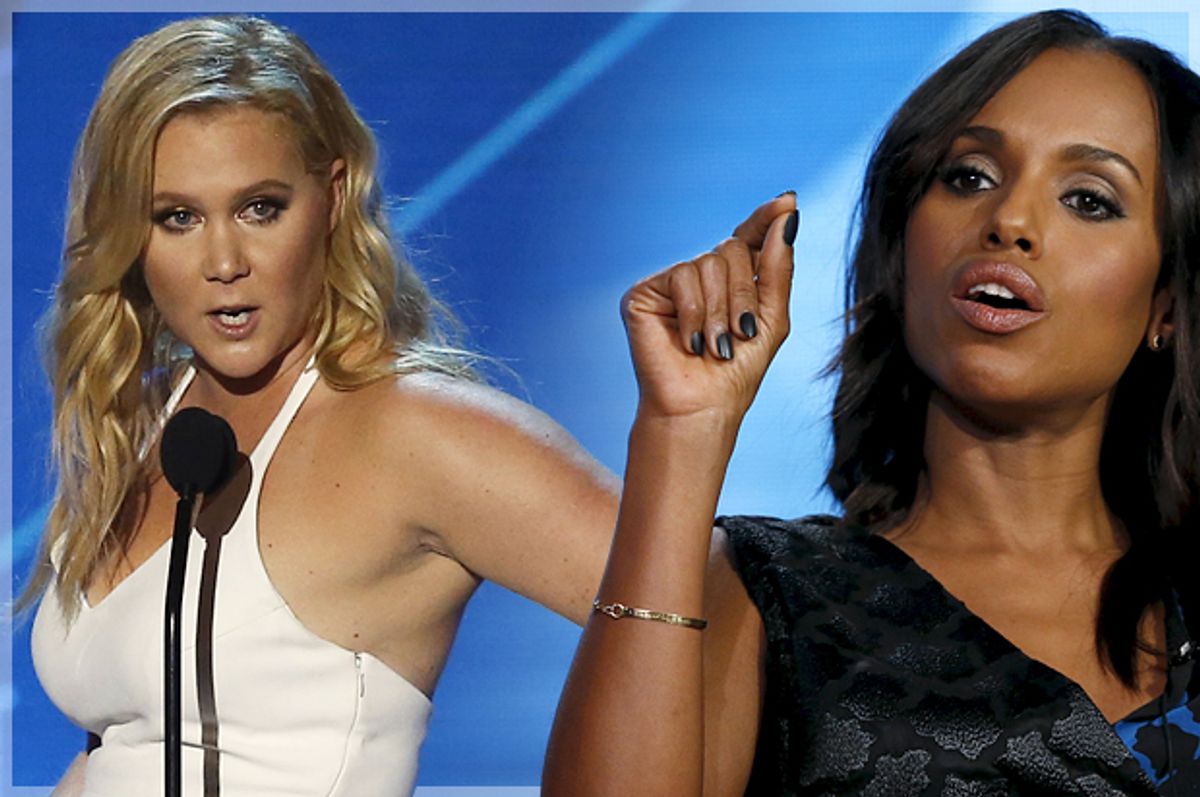 It's really impressive how profoundly unteachable the magazine industry remains when it comes to the ladies. Sure, every now and then a woman of color makes it to the cover of Vogue, the makeup-free celebrity photo shoot is a regular stunt, and perfectly gorgeous models who are not size 0 can even make it into the Sports Illustrated swimsuit issue. Yet the confining limits of what constitutes conventional attractiveness on an editorial level are still so very, very narrow. Fortunately, there are women like Amy Schumer and Kerry Washington, women who know how to deploy a well-worded social message to call out BS wrapped up in the guise of flattery.

On Instagram Monday, Amy Schumer shared a photo of the cover of Glamour's plus size special edition collaboration with Lane Bryant. There, in the lower right corner, was Glamour's enticement that inside are "Women who inspire us: Melissa McCarthy, Adele, Amy Schumer, Ashley Graham." As Schumer wrote, "I think there's nothing wrong with being plus size. Beautiful healthy women. Plus size is considered size 16 in America. I go between a size 6 and an 8. @glamourmag put me in their plus size only issue without asking or letting me know and it doesn't feel right to me. Young girls seeing my body type thinking that is plus size? What are your thoughts? Mine are not cool glamour not glamourous."

A spokesperson for Glamour quickly noted that they didn't exactly come out and call Schumer plus sized, saying, "First off, we love Amy, and our readers do too – which is why we featured her on the cover of Glamour last year. The cover line on this special edition – which is aimed at women size 12 and up – simply says 'Women Who Inspire Us,' since we believe her passionate and vocal message of body positivity IS inspiring, as is the the message of the many other women, of all sizes, featured. The edition did not describe her as plus-size. We are sorry if we offended her in any way." Oh gosh, Amy Schumer, we're so sorry we called you inspiring!

Yeah, no — that's not it. Fashionista reports that the issue includes a letter from editor-in-chief Cindi Leive that reads, "Many Glamour readers who wear size 14 and up tell us they don't see images celebrating their shape as often as they'd like." The issue includes previous material from the regular magazine featuring Schumer, Melissa McCarthy, Lena Dunham and Christina Hendricks. All women who inspire Glamour! Yet despite the magazine's vow that the Lane Bryant edition features "women of all sizes," it doesn't sound like recent regular Glamour cover girls like Gwyneth Paltrow or Jennifer Lawrence made the cut.

On Twitter, Schumer added that it felt "a little odd and unfair not to be told" about the move, and made her position clear when she RTed other women who said that "Singling women out for their size, and making a point about it is never glamorous" and "'plus size' is just another way of splitting us into uniformed groups, putting a label on people's appearance."

And, because she is Amy Schumer and a queen, she then called it a night with the message: "Thanks for sharing your thoughts everyone except the people who told me what I 'should feel' or what I 'should have focused on' … Bottom line seems to be we are done with these unnecessary labels which seem to be reserved for women," and a clip of her running on a beach in a bikini, flying a kite.

When clueless fashion magazines segregate the "plus sized" and patronizingly call them "inspiring," it's not really a compliment. It's a way of telling women with non-supermodel sized bodies that they're something other than normal. As Melissa McCarthy observed last year, "I don’t like the segregated plus section. You’re saying: ‘You don’t get what everybody else gets. You have to go shop up by the tire section.'"

But size is far from the only way of limiting women. Also on Tuesday, Kerry Washington posted her cover image on the new issue of AdWeek, a photo that depicts her looking regal, powerful — and not really like herself. In her post, Washington confessed that "I'm proud of the article… I have to be honest... I was taken aback by the cover. Look, I'm no stranger to Photoshopping. It happens a lot. In a way, we have become a society of picture adjusters - who doesn't love a filter?!? And I don't always take these adjustments to task but I have had the opportunity to address the impact of my altered image in the past and I think it's a valuable conversation. Yesterday, however, I just felt weary. It felt strange to look at a picture of myself that is so different from what I look like when I look in the mirror. It's an unfortunate feeling."

The magazine's editorial director James Cooper soon issued a vague statement that Washington is "a class act," and that "We are honored to have her grace our pages. To clarify, we made minimal adjustments, solely for the cover's design needs. We meant no disrespect, quite the opposite. We are glad she is enthusiastic about the piece and appreciate her honest comments." On Twitter he added, "Added volume to hair for dramatic effect. No disrespect." I don't think this was about hair.

In their different ways, both Schumer and Washington — two smart, successful, beautiful women — have in the span of one day pulled back the curtain and called out the industry's absurd and limiting ideas about appearance. They didn't have to do that. But they chose honesty and dialogue over faint praise and inauthentic images. And it was damn beautiful.