"Breastfeed is the best vaccine for everything!": An anti-vax mom changes her tune, and the idiotic backlash begins

In a viral video, a mother tells what happened when she refused a pregnancy vaccine for pertussis 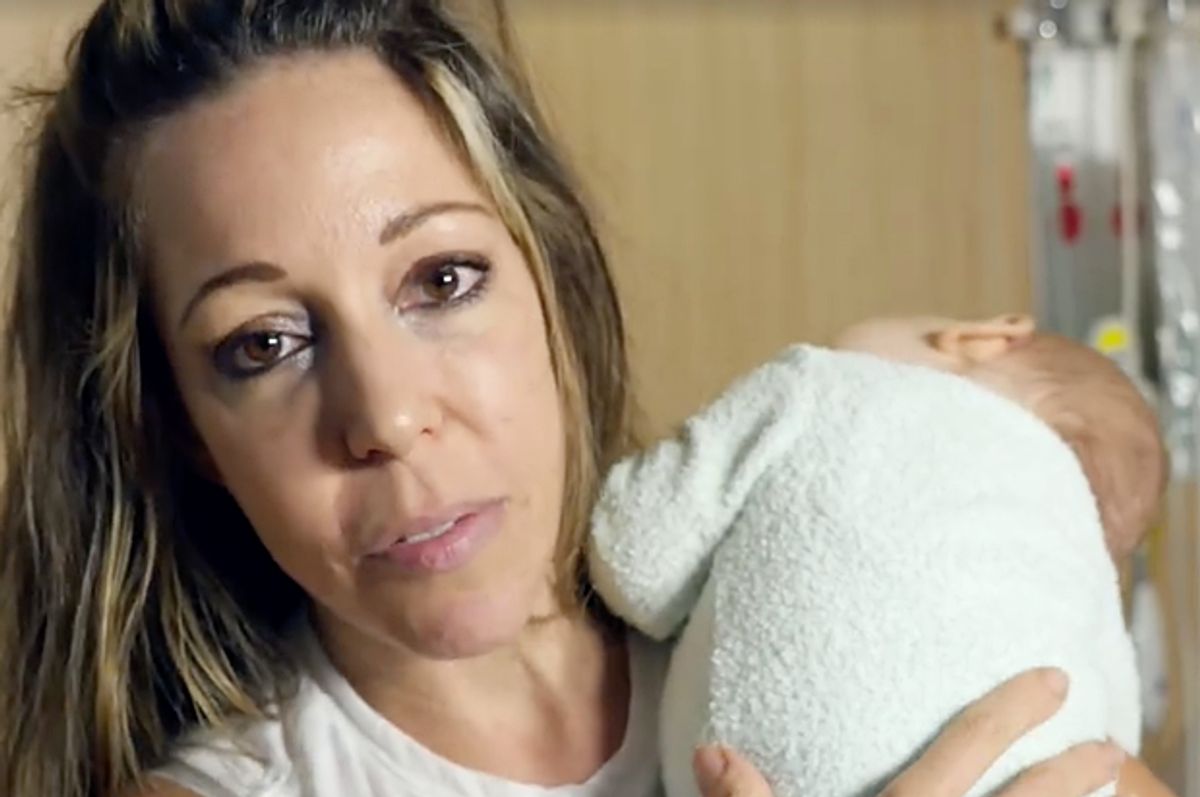 You feeling all right? No aches, pains, sniffles? Great. Now go ahead and remember that doesn't mean this is a permanent state, or that you are impervious to illness. That's why vaccines matter.

In a bold and persuasive video posted earlier this week by Australia's Gold Coast Hospital and Health, a mother named Carmit Avital introduces us to her baby daughter Eva, and describes what happened when she opted out of getting a pertussis booster when she was 28 weeks pregnant. As she explains, "Being the healthy, fit, organic woman that I am, I said, 'Leave me alone, I don't need this crap." But it turns out that she did. "I've been a very healthy pregnant woman, no problems no complications," she says. "Worked, worked out, went to the gym every day, ate very health, had no deficiencies, had a natural birth. And somehow through the process of the last two weeks of my pregnancy managed to get whooping cough."

Soon after Eva was born, she says, "I quickly found out I had pertussis and I've given it to her…. Within two weeks, the cough became pretty scary. Horror movie. Coughing to the point of going blue, flopping in my hands, can't breathe, running to the hospital… She's not breathing for three minutes. And it just ended up being here in the hospital in intensive care with a baby that coughs and coughs and coughs. It's just so hard to watch your tiny little thing. They go red and from red they go blue and sometimes they go a bit black and for a minute they think they're dead in your hands." She adds, "Even me the bulletproof lady that's never been to a doctor, traveled the world, felt healthy, got the whooping cough. And she's into week four. If I could turn back time I would have protected myself."

Here in the U.S., the CDC also recommends the whooping cough vaccine for pregnant women, "preferably during your 27th through 36th week, to give your baby the most protection when she is born." And Gold Coast's Public Health Staff Specialist Dr. Paul Van Buynder warns that while fewer than half of of all Australian mothers to be get the booster, "Every woman needs a pertussis vaccine booster every pregnancy."

But a health expert's words don't have the impact of those of an exhausted, distraught mother who has spent weeks fearing for her child's life. The video has been viewed on Facebook nearly half a million times so far.

Avital's choice to go public with her experience, to admit that she has regrets about a choice she made during her pregnancy that has had such a huge and terrifying impact on her child, is an incredibly generous and brave thing to do. On Facebook, her story has received messages of support and hope — and naturally, her choice has also attracted a fair share of anti-vax dopes. "Whooping cough is perpetuated by the vaccine," declares one person. "Breastfeed is the best vaccine for everything!" explains another. And because the Internet community loves a conspiracy, there are of course there are the people who insist the entire story isn't real. "Ive just watched this. Ive had 3 newborns and this baby looks very fake. Its deff not a real baby," writes one person, who clearly doesn't believe in vaccines or apostrophes. "do you really think we are that stupid," says another. "Come on, this is a fake baby and you are desperate GCH." Someone else demands, "You could at least have written a better script but I guess the public is so gullible, they will believe anything."

Gold Coast Health, meanwhile, is standing by the video, explaining, "Carmit is not an actress nor were her words scripted - they are her own. While her baby Eva remains unwell, she has improved and we are optimistic of a good outcome for her." And it's not, by the way, hard to find Avital's own Facebook page, which chronicles — with photos — her pregnancy, Eva's birth in February, and her later announcement that "My little baby Eva is in hospital getting treated for the horrible virus - whooping cough ... It's been 24 days so far and hopefully she will be better soon." There's even a repost from just this past winter from the "Vaccine Resistance Movement" against the HPV vaccine. Oh, also, how dumb and paranoid would someone have to be to think a modern health organization would fake something like this?

Dr. Van Buynder told the BBC this week that Eva is improving and will likely be able to come home in a few weeks. But he adds, "Sadly this is becoming more common. There's always a feeling of pregnancy being this special state and you don't want to put anything into your body, but what's really bad for your baby is to get whooping cough or influenza." And though there will still be those who refuse to believe that vaccines save lives, I believe the words of Avital as she holds her baby and says, "It's been a nightmare."