How a failed rebellion changed the world: The Easter Rising's strange centennial

The doomed rebellion 100 years ago was more than a minor colonial squabble, or a mythic saga of noble sacrifice 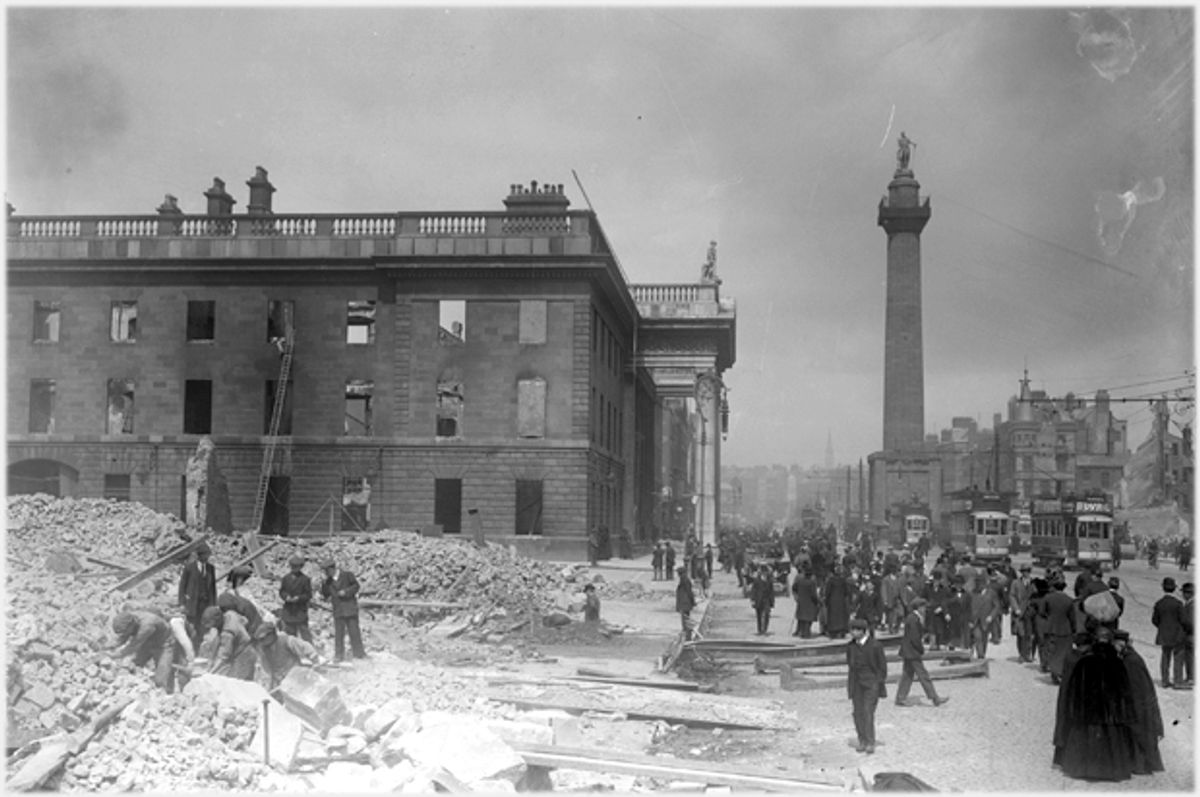 The burnt out shell of the GPO, the rebel headquarters, after the Easter Rising of 1916. (Wikimedia)
--

Everything about the Easter Rising of 1916 is controversial, including when to celebrate its centennial. By longstanding tradition, the anniversary of the doomed rebellion that ultimately led to the creation of an independent Irish state is celebrated on Easter Monday, the day picked by the insurgents for the most overtly Catholic revolt in the long history of Irish-British discord. So the centennial observation of the Rising happened in Dublin last week, complete with speeches, parades, wreath-laying ceremonies and the kinds of Irish sectarian disputes that are nearly impossible to explain to outsiders. (A small group of protesters described as “dissident republicans” — essentially a fragment of a fragment of the old IRA — were angry that the observance encompassed not just the Irish martyrs of the Rising but also the British soldiers who died in suppressing it.)

As a historical matter, however, that’s complete nonsense. It’s like saying that the Fourth of July will be celebrated on June 10 this year, because of divinations found in Thomas Jefferson’s horoscope. The Easter Rising began on April 24, 1916, so we’re still two weeks away from the actual 100th anniversary. What’s more important: Historical fact, or the complex ecclesiastical rules governing the date of Easter, which (since you asked) were established by the Council of Nicaea in 325 A.D.? The fact that this question comes up even in 2016, when the Church has lost so much of its power and influence in everyday life, is, if I may say so, so Irish.

There can be no doubt that the Easter Rising was and is a quintessentially Irish phenomenon, right down to the mythic symbolism, the theological murkiness, the petty political disputes and the consciousness, evident even in contemporary accounts, that the rebels were writing a historical narrative aimed at future generations. Does any other nation on earth honor a failed revolution, conducted by a poorly armed, fatally disorganized and ideologically incoherent band of rebels with little popular support, as the supposed moment of its birth? For that matter, does any other modern nation feel such profound ambivalence or uncertainty about its own origins?

In a 2014 speech, former Irish Taoiseach (or prime minister) John Bruton described the Easter Rising as “completely unnecessary” and suggested it had “damaged the Irish psyche” and “led directly to the brutal violence” that afflicted Ireland in later decades. Granted, Bruton is something of a political outlier and a known “West Brit” (to use an Irish insult), but it’s still striking to hear those views expressed by someone who headed a government that traces its ancestry to the event in question. Imagine a former U.S. president expressing the view that maybe the American colonists should just have laid down their guns at Lexington and Concord and walked away. Surely we could have worked out that taxation dispute through nonviolent means!

But from this historical distance Easter 1916 also looks like a global phenomenon, a tiny event with a long tail that shaped much of the 20th century and beyond, and whose repercussions extend much further than a damp little island on the western edge of Europe. It’s somewhat possible, after 100 years, to look past the “terrible beauty” of William Butler Yeats’ propaganda poem — one of the greatest ever written, but still a propaganda poem — past Sinéad O’Connor singing “The Foggy Dew” and past the sentimental melodrama of Irish blood sacrifice, which the Rising simultaneously fed upon and helped create. If the Easter Rising possesses unique and intensely contested significance in Irish history, one reason for that is because it’s also an important chapter in world history, whose meaning has not been easy to perceive through the mind-altering mists of Erin.

No historian would propose that the Easter Rising marked the first instance of urban guerrilla warfare, or the first time women served as military combatants, or the first illustration of the maxim that one man’s terrorism is another man’s patriotism. It might not have been the first time that the forces of nationalism, socialism and anti-imperialism (along with currents of feminism and trade unionism) coalesced into one revolutionary movement, although I can’t think of an earlier example that reflected the same degree of self-consciousness. But the fact that those things all came together during the botched six-day existence of the Irish Republic, which never controlled more than a few square miles of central Dublin, had an explosive impact around the world.

What actually happened in Dublin 100 years ago is relatively simple to recount, which hasn’t stopped successive generations of historians from retelling and reinterpreting the story through various perspectives. There have been various waves of nationalist history, “revisionist” history (meaning hostile to the Rising, and to Irish nationalism more generally) and then counter-revisionist history, but these days one can find accounts that at least try to resist the magnetic poles of Irish politics, and to steer away from tales of Great Men and their Great Deeds. The best of these are probably Charles Townshend’s 2005 “Easter 1916” (recently republished in a revised centenary edition) and Fearghal McGarry’s newer “The Rising,” which makes extensive use of the Irish government’s recently released archive of oral history.

After seven centuries or so of direct or indirect British rule and numerous failed revolts, a group of Irish nationalists and republicans (the latter word signifying an openness to armed rebellion) saw the political and military chaos of World War I as the perfect context to strike a fateful blow for freedom. Their cause was deeply unpopular at the time, a central factor that many non-Irish people don’t understand and many Irish people strive to forget. Most of the Irish Catholic population subscribed to the views John Bruton still holds, and supported the moderate nationalist politics of John Redmond and the Irish Parliamentary Party, who advocated home rule, meaning limited self-government within the United Kingdom.

Nearly everything that could have gone wrong did go wrong; under the circumstances, it’s impressive that the Easter rebels held out for six hours, let alone six days. Perhaps as many as 10,000 Irish Volunteers and allied militia groups had hypothetically prepared for the Rising, but their training was slapdash at best and communication was abysmal. Pádraig Pearse, who would briefly become the Irish Republic’s self-appointed president, called for an uprising during Easter week, but Eoin MacNeill, the Irish Volunteers’ nominal leader, countermanded his order. Barely 1,200 rebels answered the call on Easter Monday in Dublin, and hardly any in the rest of the country. Several hundred more showed up as events progressed, but the total number of participants in the Rising was well below 2,500.

One of the numerous ways the British government overreacted to this crisis was by vastly overestimating the size and scale of the Rising, and exaggerating the threat it posed to British rule in Ireland. (Which was virtually nil, at least at first.) More than 3,500 people were arrested after the rebellion was quelled, many of whom had absolutely nothing to do with it. Socialist leader James Connolly, the greatest political thinker and foremost internationalist among the rebels, had confidently predicted that the British would never use heavy artillery in the heart of what was technically a major British city. He was wrong about that one: In a classic example of military overkill, the Royal Navy gunship Helga steamed up the Liffey and shelled the city center relentlessly for several days, reducing the main commercial strip of Sackville Street (today’s O’Connell Street) to smoldering rubble.

Then came the most famous, and most spectacularly counterproductive, of British overreactions: the staggered executions of Pearse and Connolly and Joseph Plunkett and Seán Mac Diarmada and 11 other rebel leaders, including all signatories of the Proclamation of the Irish Republic that Pearse had read outside the General Post Office on Easter Monday. Instead of shooting them all at once, British authorities spread their deaths across a two-week period in May. If the intention was to demoralize and intimidate the civilian population, the effect was precisely the opposite. The parade of noble widows refusing to weep, and the anecdotes of heroes stoically facing the firing squad while praying for their executioners, played into deeply rooted Irish and Catholic narratives of sainthood and martyrdom, and radicalized public opinion within a fortnight.

After James Connolly was shot — tied to a chair, because he was too badly injured to stand — the British had done the work of the Rising more effectively than its idealistic and unprepared leadership could ever have done. After five ensuing years of deepening political resistance and worsening guerrilla conflict, the world’s most powerful empire was forced into an unprecedented decision. It allowed a nation that for the previous 115 years had been considered an integral part of the United Kingdom to separate and go its own way.

These are the true lessons of the Easter Rising, which remain profoundly uncomfortable in contemporary Ireland, as in most of the Western world: First of all, a seemingly pointless and pathetic act of resistance provoked a vastly more powerful opponent into disastrous mistakes. Second, confrontational and theatrical violence proved capable of transforming political reality, and achieved rapid results in a context where 40 years or more of respectable parliamentary politics had completely failed. Do I really need to point out how clearly we can hear those lessons resound through the post-9/11 world, especially in the American superpower’s relentless campaign of self-destruction in the Middle East?

One can plausibly argue that the Easter Rising shaped the history of 20th-century global revolution far more clearly than it shaped the future of Ireland, which has never been quite sure how to feel about the lessons of 1916. This comes through clearly in the Ken Burns-style public TV documentary “The 1916 Irish Rebellion” (and accompanying coffee-table book), supervised by Notre Dame Irish studies scholar Bríona Nic Dhiarmada, which offers an excellent starting point for newcomers. If you want the advanced course in how the Irish changed history (perhaps more than they wanted to), I recommend the witty and surprising book “Who’s Afraid of the Easter Rising?” by radical historians James Heartfield and Kevin Rooney. They go deep into how the Rising has bedeviled Irish politicians and historians, and how its ripple effects were felt among anti-imperialist movements in India, Africa, the Caribbean and elsewhere.

Lenin and Trotsky perceived the Easter Rising as the opening salvo in a wave of European revolution that would overthrow bourgeois imperialism. As you may recall, they staged a somewhat more successful version 18 months later, and while the relationship between the two events is not linear, it's also not accidental. Ho Chi Minh, who was quite likely living in Brooklyn in April 1916, reportedly wept at the news of the Irish rebels’ execution. Marcus Garvey cited the dedication and self-sacrifice of the Irish Volunteers as an inspiration for his own movement, and named his meeting hall in Harlem after theirs. Those examples led in various ambiguous directions, not all of them necessarily positive. We could say the same about the modern nation of Ireland, a cautious and conservative society that seems partly European, partly American and partly British, and in no way resembles the glorious cultural rebirth imagined by Pearse and Connolly. The Irish people know that we're supposed to remember Easter 1916, and commemorate those who died. But we're still not quite sure why.