No pity for Dennis Hastert: His "public shaming and humiliation" don't erase his so-called "misconduct"

The Republican, accused now of sexual abuse by 4, pleads for leniency in sentencing for his monetary crime 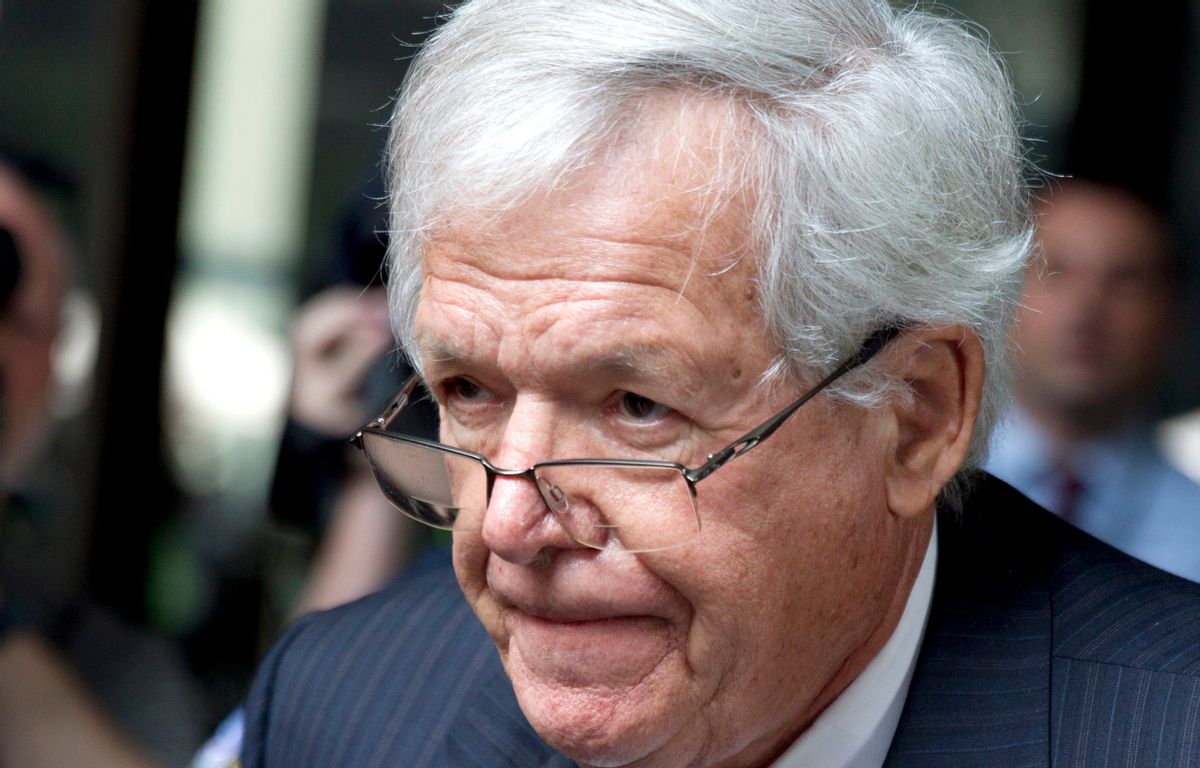 FILE - In this June 9, 2015 file photo, former U.S. House Speaker Dennis Hastert departs the federal courthouse in Chicago. Hastert pleaded guilty in October of 2015 to violating bank laws as he sought to pay $3.5 million in hush money. Hastert's lawyers want a judge to spare Hastert from prison time in the case and give him probation. A filing Wednesday, April 6, 2016 comes before the 74-year-old Republican's sentencing by a federal judge April 27. (AP Photo/Christian K. Lee, File) (AP)
--

It's understandable that Dennis Hastert is choosing his words very, very carefully right now. Yet somehow he and his handlers are still getting them outrageously wrong. Here's a hint — when you're apologizing for your "misconduct" after you've been accused of sexually abusing teenagers, you might want to scale back on how humiliating this is for you.

The 74 year-old Republican former Speaker of the House has spent the past decade embroiled in controversy. Back in 2006, there were the accusations of shady financial dealings involving a lucrative "Prairie Parkway" in his district. That same year, a House Ethics Committee investigation found Hastert (among others) "willfully ignorant" in responding to warnings about the conduct of former U.S. Rep. Mark Foley, who at the time was under fire for sending explicit messages to an underage page. Then last year, the bombshell — he was indicted for "structuring currency transactions to evade currency transaction reports and making false statements to the FBI" after it emerged that he'd agreed to pay an anonymous male  $3.5 million to "compensate for and conceal his prior misconduct."

The LA Times reported at the time that federal law enforcement officials said that Hastert "had paid $1.7 million over the last four years to conceal sexual abuse against a former male student he knew during his days as a teacher in Yorkville, Ill., where Hastert worked until 1981." Last fall, he reached a plea deal to admit to "a felony count of illegally structuring cash withdrawals to evade bank currency-reporting requirements," though the Chicago Tribune noted then that the plea "only hints at the alleged wrongdoing" behind the monetary shenanigans.

Now, however, a Chicago Tribune investigation published Thursday reveals that "at least four people have made what law enforcement sources say are credible allegations of sexual abuse against Hastert" when they were high school students.

Jolene Burdge is the sister of an alleged victim who claimed that Hastert "had sexual contact with him all through high school." She told the Tribune this week that after her brother's death of AIDS in 1995, she confronted Hastert and asked why "you did what you did." And she said, "He just stood there and stared at me, stone-faced. Then I went on to say, 'The secret didn't die in there with [my brother], and I want you to know, I know.' He just looked at me and turned around and went to his car. It was silence then and silence now."

The Tribune notes that Hastert has not been charged with sexual abuse or assault, and that legal experts believe the statute of limitations would likely prevent any such proceedings now. But the weight of these allegations is nonetheless powerful. They are the latest blow for a man once one of the most influential figures in American politics, who has lately been recovering from a stroke he suffered in 2015, and whose attorneys claim "nearly died" from a blood infection in November.

Perhaps that's why this week his legal team issued the carefully worded statement that his sentencing would be "be the most difficult day" of his life, and that "Mr. Hastert has made mistakes in judgment and committed transgressions for which he is profoundly sorry," adding, "he fully understands the gravity of his misconduct decades ago and regrets that he resorted to … an effort to prevent the disclosure of that misconduct. He will stand before the Court having deteriorated both physically and emotionally, undoubtedly in part due to public shaming and humiliation of an unprecedented degree."

So let me get this straight — of all the ways Hastert's (no doubt highly compensated) legal team could have phrased this, they went for a plea for sympathy? They went for a guilt trip? Are we to understand that the man's "deterioration" is the result of not even being ashamed but being publicly shamed? Even for things he's admitted to? That takes gall. And even without acknowledging the sexual abuse allegations, to call his behavior "mistakes in judgment" takes a massive combination of cold blood toward alleged victims and survivors.