Bill Clinton needs to go away: Why his presidency has become a political liability

In a widely circulated video yesterday, Clinton defended programs that have ballooned both prison and poverty rates 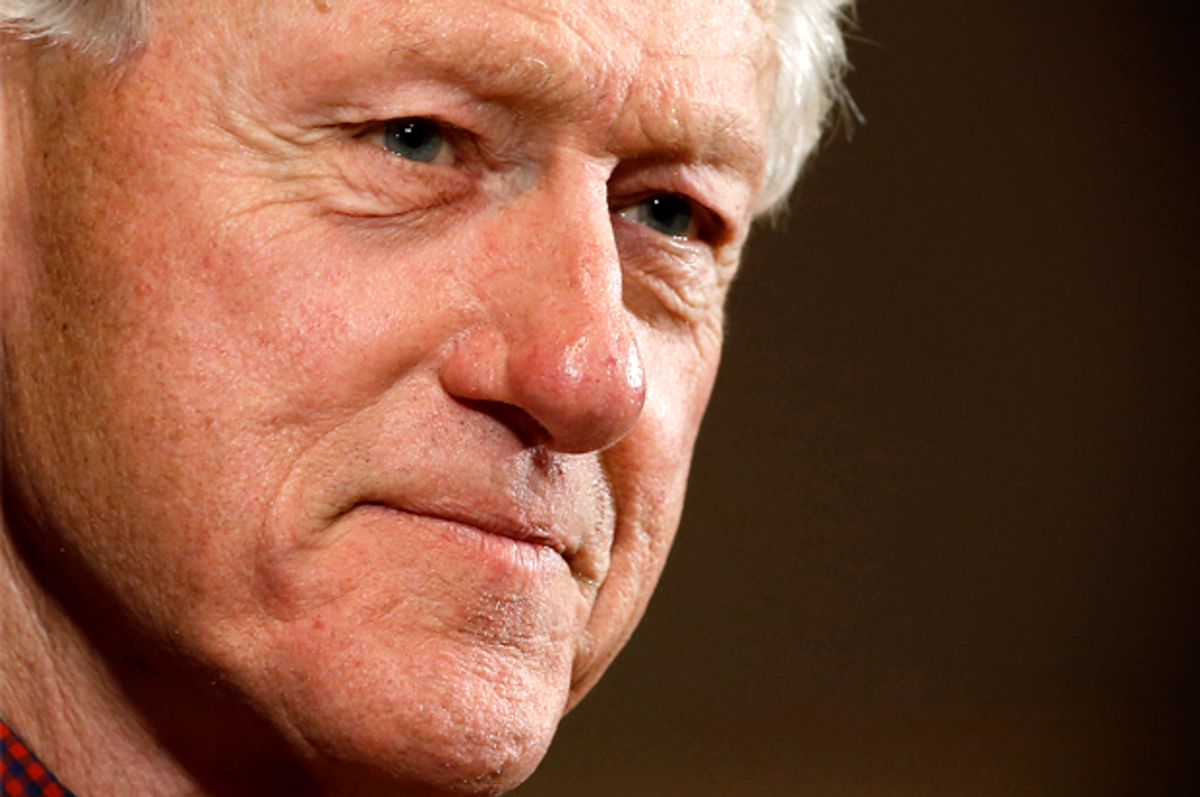 Bill Clinton is no doubt his wife’s double-edged sword: Though he is among the most charismatic politicians of his era, he’s also prone to saying things that make campaign life rather awkward. The big problem, however, isn’t just that Bill Clinton can’t keep his mouth shut. It’s that his right-leaning New Democrat policy record is a bad fit for today’s liberal politics.

At the same time, he insisted that Hillary Clinton had nothing to do with either. And that gets at one of her campaign’s unshakeable dilemmas: They are running on what’s still popular about the Clinton years and trying run away from what’s not. That, of course, is impossible. And in Philadelphia, the balancing act tripped as a frustrated Bill Clinton lashed out at protesters with a full-throated recourse to throwback war-on-crime rhetoric.

“I don’t know how you would characterize the gang leaders who got 13-year-old kids hopped up on crack and sent 'em out into the street to murder other African American children,” he chided. “Maybe you thought they were good citizens. She didn’t. She didn’t. You are defending the people who kill the lives you say matter. Tell the truth.”

That’s what will get the headlines, and possibly spark a hashtag. And for good reason. But what’s most remarkable is that Clinton made a case for the laws that just doesn’t add up. On the Crime Bill, he blamed Republicans for the the “increased sentencing provisions,” and said that the law created “a 25-year low in crime” and a 33-year low in the “murder rate.”

Protesters, he said, were “afraid of the truth” for not letting him speak. But the truth is not what Clinton was speaking.

“I was around in 1994 and very engaged on the crime bill, and it was quite clear that it was Bill Clinton's legislation, not forced on him by the Republicans,” emails Marc Mauer, executive director of The Sentencing Project.

Indeed, tough-on-crime posturing was nothing new for the Bill Clinton who left the campaign trail in 1992 for Arkansas to preside over the execution of a man so mentally disabled after a suicide attempt that he reportedly put aside his last meal’s pecan pie “for later.” In his 1994 State of the Union, Clinton endorsed three strikes laws, saying “those who commit repeated violent crimes should be told when you commit a third violent crime, you will be put away and put away for good, three strikes and you are out.”

As for the decrease in crime, that’s real. But it’s not clear which provisions of the bill it is that Bill believes are responsible. Whatever he had in mind, the evidence suggests that he’s wrong that his law had anything to do with it.

If he's claiming the decrease came about because of  the surge in federally-funded police hired by localities, he’s likely wrong there: Most researchers have found that it had little to no effect on crime. And if he’s referencing the harsh sentencing, the best available evidence suggests that he’s wrong on that as well: A groundbreaking 2014 study from the National Research Council of the National Academies found that "the increase in incarceration may have caused a decrease in crime, but the magnitude of the reduction is highly uncertain and the results of most studies suggest it was unlikely to have been large."

The truth of the matter is, as Mauer explains:

“Crime was already going down before the crime bill was adopted. This was due to a number of factors, not least of which was the waning of the crack cocaine epidemic of the late 1980s.”

On so-called welfare reform, meanwhile, Clinton made a point of denying that the law led to increased black poverty.

"They say the welfare reform bill increased poverty," Clinton said. "Then why do we have the largest drop in African-American poverty in history when I was president?"

Well, that was likely because the economy was booming—but not in a way that laid the groundwork for long-term equitable growth. The rise of the service economy, followed by the economic meltdown, didn’t serve poor people well over time. When the bottom fell out, there was no longer a safety net left to catch the poor (however scrappy that net had been prior to its decimation). The number of those living in extreme poverty has skyrocketed since 1996.

Frances Fox Piven, the famed social scientist at CUNY Graduate Center, explains in an email to Salon that “the bill wiped out the rights that poor people had to income assistance under” Aid to Families with Dependent Children, “rights that were the result of court rulings and activist agitation in the 1960s. Basically the new law turned welfare over to the states, and gave them an incentive not to grant assistance because they could keep any federal moneys they did not spend on benefits.”

Piven writes that "the catastrophic result was not immediately evident because in the late 1990s the economy was booming," which meant that jobs were initially available for those kicked off the rolls. But as unemployment rose and poor people’s wages stagnated, it started to hurt: Prior to the reform, "68 percent of families with children received cash aid," Piven said. "By 2013, the percentage had fallen to 26 percent and the assistance leaves these families well below the poverty level."

Bill Clinton, she notes, signed the “bill with Hillary's advice and encouragement.”

Hillary Clinton can’t get around running as the Clinton Administration’s second coming. Though her camp likes to protest that holding her to account for anything she endorsed during the Clinton presidency is unfair, it's actually appropriate in a purported democracy that has proven itself prone to the allure of political dynasty. Times have changed, and many Democratic voters don’t want to go back to the 1990s. And Hillary Clinton has to answer for it.

Bernie Sanders’ insurgent campaign has been so shockingly successfully precisely because he’s been able to exploit this dissonance. On welfare cuts, which he voted against and described as a bigoted assault on the poor, that’s easy. But the crime bill has been a tough one for Sanders to exploit to his advantage: He did vote for that one.

Sanders, however, has said that he did so because it included the Violence Against Women Act, and he did vocally criticize incarceration as a policy solution: “We can either educate or electrocute,” he said. “We can create meaningful jobs, rebuilding our society, or we can build more jails.” He also criticized the unsuccessful 1991 Crime Bill, which he voted against, as “not a crime prevention bill” but “a punishment bill, a retribution bill, a vengeance bill.”

The 1994 legislation was a classic something-for-everyone bill, and voting for it while criticizing provisions he didn’t like may have looked progressive at the time; two decades later, it’s not a great look. Nonetheless, Sanders on many issues provides a decisive contrast. And many people like what they see.

On welfare, Bill Clinton was just plain wrong. On crime, he rightly pointed out that the bulk of the nation’s prison population reside in state facilities; that there was very real public outcry over crime and that people demanded action; and that there was support even from black leaders for the bill. But it was politicians like Clinton who weaponized those public fears for political gain. And today, voters are beginning to understand the costs. And that continues to be a hard square to circle for Hillary.