Give Pope Francis a break: Leading a large institution is always an exercise in compromise

His new statement on love and family doesn't go as far as critics want, but still offers hope to Catholics like me 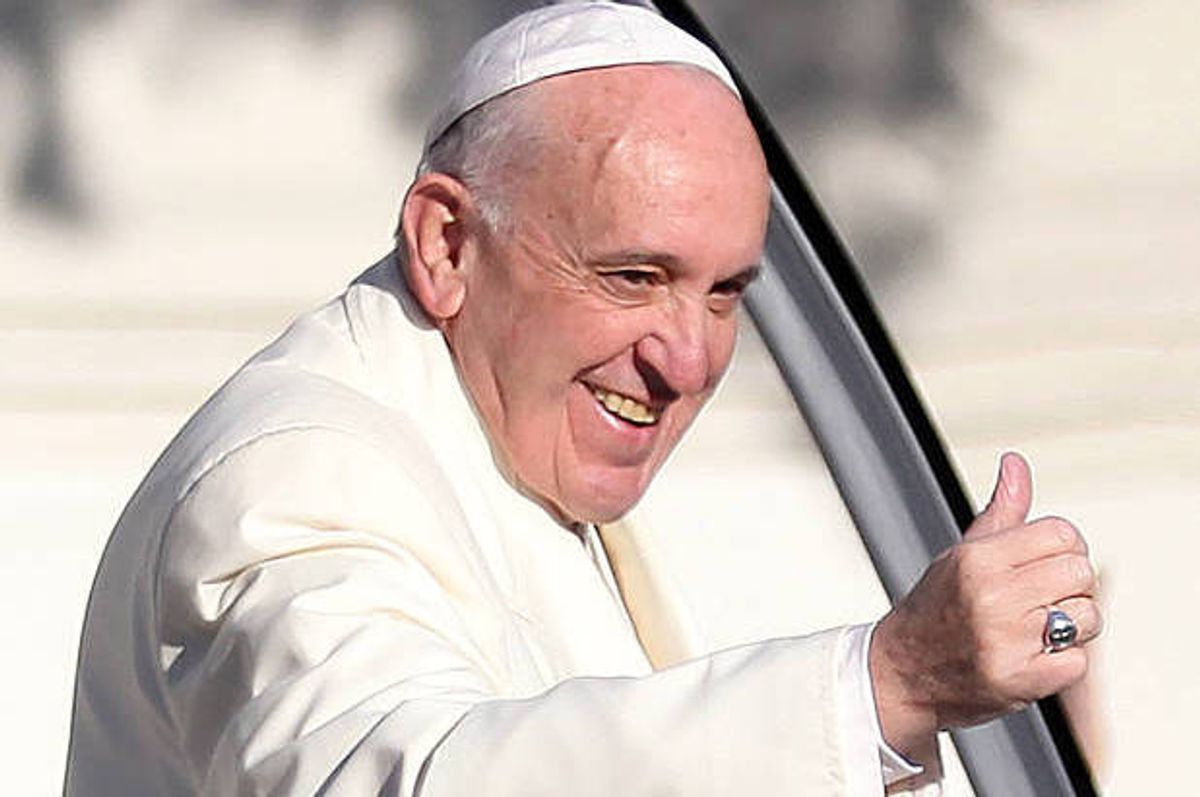 Pope Francis is the most Democratic president the papacy has ever seen. He arouses the ire of conservatives and traditionalists, while his more liberal constituency wishes he'd do more. Maybe that's why I have so much sympathy for the guy — because when it comes to his relationships, it's complicated.

The pope just released his first major statement on family of his three-year tenure as leader of the Catholic Church. The paper, released on Friday, is a 263-page call for greater inclusion and tolerance called "Amoris Laetitia" — "The Joy of Love." To some, it reads as a groundbreaking step forward from the Vatican for previously shunned individuals like single parents, couples living together outside of marriage and divorced people. To critics, though, it doesn't go far enough, still focusing, as a USA Today headline put it, on "good news for divorced, but not for gays."

The document, two years in the making, offers no groundbreaking new proclamations, no official changes in Church policy. It affirms that "every person regardless of sexual orientation… be respected in his or her dignity and treated with consideration" while it also insists that "There are absolutely no grounds for considering homosexual unions to be in any way similar or even remotely analogous to God’s plan for marriage and family." It lightly acknowledges that "the upright consciences of spouses who have been generous in transmitting life may lead them, for sufficiently serious reasons, to limit the number of their children" but doesn't come out with any new directives for reproductive rights.

It is not an earth-shattering message. It is not a call for sweeping reform. And to the many whose own lives are not affected by what a bunch of men working in an incredibly old and flawed institution say, it's not a big deal. But it is nevertheless, to those invested in the Catholic Church and the way it conducts itself in the world, a progressive statement. The letter urges that "Seeing things with the eyes of Christ inspires the Church’s pastoral care for the faithful who are living together, or are only married civilly, or are divorced and remarried…. The Church turns with love to those who participate in her life in an imperfect manner…. The Christian community’s care of such persons is not to be considered a weakening of its faith and testimony to the indissolubility of marriage."

And maybe this doesn't have the tone of a Hillary rally, but as an eternally conflicted feminist Catholic woman, I found this a real mic drop: "I think particularly of the shameful ill-treatment to which women are sometimes subjected, domestic violence and various forms of enslavement which, rather than a show of masculine power, are craven acts of cowardice. The verbal, physical, and sexual violence that women endure in some marriages contradicts the very nature of the conjugal union. I think of the reprehensible genital mutilation of women practiced in some cultures, but also of their lack of equal access to dignified work and roles of decision-making."

And this, in its own way, is also pretty rad: "Young married couples should be encouraged to develop a routine that gives a healthy sense of closeness and stability through shared daily rituals. These could include a morning kiss, an evening blessing, waiting at the door to welcome each other home, taking trips together and sharing household chores…. As long as we can celebrate, we are able to rekindle our love, to free it from monotony and to color our daily routine with hope." Run and tell that, pontiff.

Naturally, Chill Pope's crazy notions that "A pastor cannot feel that it is enough to simply apply moral laws to those living in" and advice that "Each country or region can seek solutions better suited to its culture and sensitive to its traditions and local needs" has critics fuming. Catholic marriage counselor and writer Rose Sweet told the Washington Post Friday that "We’re dealing with very immature, uninformed people who want Papa Francisco to give them what they want." And it's not hard to find FOX News comments fretting that "He's taking the foundation of stone that Christianity is built upon and replacing it with sand because he thinks it's the thing of the day."

Meanwhile, the sentiments of more liberal Catholics can be summed up with the observation of Catholicism scholar Lucetta Scaraffia, who told the New York Times, "It wasn’t as innovative as many had hoped. The result is quite modest with respect to the investment and expectations that the world had." Can't please everybody. Possibly can't please anybody. Well, if that doesn't does like every Democratic president, governor, or mayor I've ever lived under, I don't know what does.

Running a large institution — a country, a city, a church — is always mired in the politics of compromise. It's always going to be a game of appeasement. Do I want so much more for women and LGBT persons? Do I want their rights to live and love in safety and dignity recognized? Oh, you bet. And I'm going to keep pushing for that. But I'm also psyched to have someone in a position of leadership who isn't actively scary, who isn't trying to undo the gains made and turn back the clock. And like Francis, I'm trying to have hope, even in something that continues to chug along, as he'd say, in an imperfect manner.