Bugs that taste "like foie gras": Eating insects might not save the world, but it could be a healthy start

Salon talks to the director of "BUGS," a new documentary about chefs cooking up termite queens, maggot cheese, more 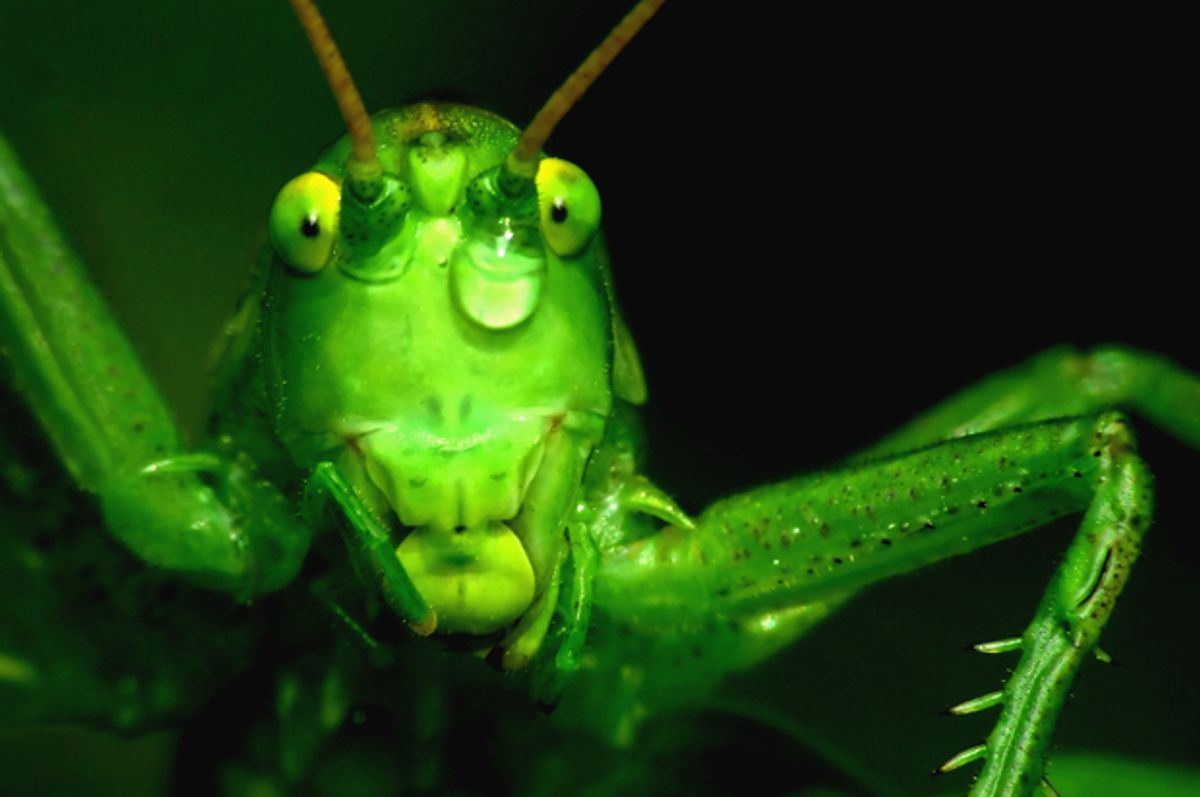 Can eating bugs save the world? Or can it at least help with sustainability, the slow food movement, and creating bio-diverse systems? Andreas Johnsen’s fascinating (although for some, disgusting) documentary, “BUGS,” which will receive its world premiere at the Tribeca Film Festival, investigates the work of the Nordic Food Lab in Denmark where Ben Reade and Josh Evans try to make bugs tastier. The pair do fieldwork with indigenous cultures in Australia, Africa, and Latin America. They emphasize that the 9,000 edible insects in the world contain valuable protein sources, even though bugs are not legally recognized as food in many countries.

These chefs are not just frying grasshoppers; Ben and Josh create culinary delicacies such as Queen Termite with Mango, or Escamol Tortillas. (Escamol, of course, is ant larvae and pupa)

Salon chatted via Skype from Copenhagen with Johnsen about his film, food, and why we should eat bugs.

What drew you to this story, and what do you want audiences to feel watching your film?

The reason I make documentaries is because I’m a curious person. I want to try everything, I’m not afraid to eat anything, and I like to travel. It was not an obstacle that this story was about eating insects around the world. I’m quite into food—I have a restaurant, ranees.dk in Copenhagen, so this topic was attractive to me. I’m not trying to sell it or disguise it as delicious or convince anyone to eat insects. I just want to show this work of the Nordic Food Lab (NFL).

There’s disgusting and amazing stuff. I wanted to show this topic for what it is. It’s been around forever. Two billion people around the world eat insects regularly. The guys at the NFL got into all this, and they started the project as a research in diet and food, solely based on taste and deliciousness. They realized there were all these debates around entomology, and created an industry out of insects for food. So Ben and Josh started questioning all of this. I went on the journey they were on.

How did you learn about the work Ben and Josh were doing in the Nordic Food Lab, and what prompted you to make a documentary about it?

I started working in a restaurant when I was 12 and through that, I learned about the culture of wine and cuisine. My brother is a wine importer. We’re friends with Noma [a restaurant by the NFL] and knew the NFL. I met Ben and Josh and they told me about what they wanted to do. The first trip was Sardinia for the Cazu Marzu [maggot-filled cheese]. From then on, I felt the guys were strong characters and I wasn’t sure how far they would take the project, but little by little the story became more political. So I thought it was important to make a film about this.

How does one become a chef of edible insects? Is there trial and error about what’s dangerous if not just disgusting to eat?

Trial and error—yes, definitely. The guys eat everything. I’m curious, but those guys are insane. They tried to fry grasshoppers and eat many different things.

Did you deliberately not show a label for what the food (or recipe) was?

I thought about having all the recipes listed at the end of “BUGS,” but I wanted to stay away from the film feeling like a cooking program, or solely about food. I wanted it to have a more universal sense. If I gave too much side info, it would lose focus. The website BugsFeed has everything about edible insects and the film as well as the movement. In addition, the NFL is an open source, and will make all the research material, recipes, papers, etc. public.

I like the point that eating sushi was once questioned, but now it’s readily available in supermarkets. Of course, I want to know what insects you sampled. I thought the honey from the stingless African bees was appealing, but that’s because I enjoy honey. I’m less inclined to sample maggot-infused cheese/ice-cream even though I like cheese and ice cream. What did you enjoy, spit out, and/or refuse to eat?

I love the point when the man in Mexico City says honey is the vomit from bees. It’s vomit from an animal! But the maggots are cheese. They have never been in contact with anything else but the cheese. We have a perception it’s disgusting because we’re not used to it.

There were some things I was not keen about eating. In Peru, we had awiwa, which is butterfly larvae. They were easy to gather: you shook a palm tree and the leaves would rain down the insects. It did not have an interesting flavor. The substance of it wasn’t nice. And it’s possible the people that we were with didn’t know how to cook it in a way we’d appreciate eating it. That was not a success.

Most of what we tried was amazing. The bush coconut in Australia, which is seen in the montage, it’s full of flies or tiny larvae when you open it, and it taste like melon and honey. It’s amazing. You lick it out. The termite queen was amazing, too. It was like foie gras. Insane!

The episode of photokeratitis and information on zinc deficiencies in Africa were disturbing. What can you share about your experiences in the field? Did you ever feel like you got in over your head making this film?

You always feel that way! The photokeratitis was so horrible. We slept an hour and a half, and when you woke up the pain was so strong you couldn’t see anything. The light was hurting so much. I never experienced anything like that. I felt blind, and it was quite shocking for us. Going to the factory in Holland where they produce all these different insects was also shocking. I respect these people so much, but I was shocked they never tasted any of the products they were making. They never cooked with these animals for themselves. Why would you want to produce for other humans what you wouldn’t taste yourself?

I can see the Escamol Tortillas being sold as street food in Mexico. How much of this food sourcing and preparation is viable in the very cultures where the bugs are being harvested?

Escamol is a good example. If more plantations like Jose Carlos Redon’s appear, and are controlled so they don’t get over-harvested, then it’s viable and nutritious. If there are more places like that, then you can make the price go down. But for the huge majority of edible insects, you go out and forage for them and eat on the spot, in situ. Sometimes raw, or you cook it immediately. So it is something that maybe not possible to make into something everyone can eat unless it becomes an industry. But then it loses all of its flavor.

Is there a danger of over-sourcing say, Queen termites? If we eat them is there a risk that we will decimate the population of the termite colony?

You risk extinction, but every time you take down a termite colony, some termites will fly somewhere else and settle, and start a new colony. Maybe it will produce more colonies and queens?

Can you talk about the way edible bugs influence our economy?

If companies start using edible insects to greenwash their image and products, there is money to be made. There is money to be spent in scientific investigations, and research to develop institutions. If they can sell it as sustainable, healthy, and nutritious, what else do you need? If they manage to convince people, then they will buy it.

I was happy to make this film with these guys because it became important for me that they were actually the only ones questioning this. When we started filming three years ago, no one questioned the Food and Agriculture Organization reports, or what the media wrote about edible insects. I feel lucky I got to go on this journey and that I could ask these questions. I’m not saying we should not make an industry out of it, but reconsider the system we are already using. It is really viable? Is it really sustainable? That’s what I’m asking.

“BUGS” certainly changes our way of thinking regarding this topic. Ben insists people have the right to “good tasting, culturally appropriate, available food.” What can you say about this kind of effort being accepted?

I’m sure with time the public in the Western world will eat more bugs. We see it in trendy restaurants that they are using edible insects. That’s an easy way to make it acceptable to the general public, and people in the food media/foodie scene will embrace it. But it’s simple: We all want to have a better, “clean” consciousness as well as a healthy life. We can live longer if we eat well. So if the companies or the media or the big organizations sell this as something that is sustainable and healthy and nutritious, we will buy it to satisfy our own needs. There are a lot of cookbooks with edible insects, so if it’s compatible to people’s culture, tradition and taste… It’s easy to sell it.