The onetime Capt. Picard plays the owner of the worst punk club ever in Jeremy Saulnier's gory, wrenching thriller 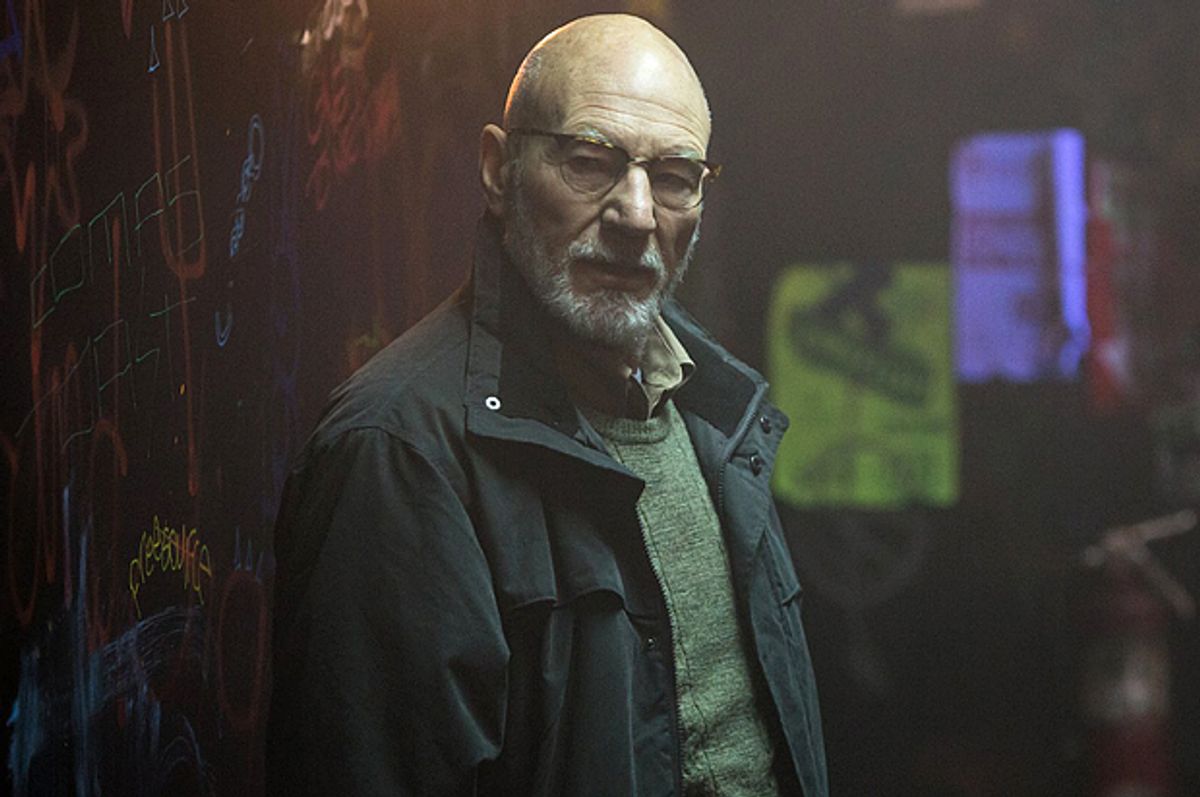 You can, if you want to, draw connections between writer-director Jeremy Saulnier’s terrific indie horror-thriller “Green Room” and recent news headlines out of rural Oregon, where the film is set. But honestly, it’s kind of a stretch. This world of Pacific Northwest white supremacists — a neo-Nazi skinhead encampment, home to a punk club where a D.C. hardcore band called the Ain’t Rights plays what is likely to be their last show — is only distantly related to that of the rural anti-government losers who occupied the Malheur National Wildlife Refuge in January. Mind you, both are scary and armed and stupid and devious. Both hate immigrants and people of color and the federal government, and share some delusional vision of a breakaway all-white nation among the redwood trees. But I bet they don’t like each other too much either.

If you’ve never heard of Saulnier or seen his movies, that’s because nobody else has either. “Green Room” ought to change that: It’s gruesome and funny and dark and incredibly tense, and by his standards it’s pretty much a star vehicle. Patrick Stewart, in one of the great casting-against-type roles of recent years, plays Darcy, the avuncular, bespectacled leader of the Nazi skins, faced with the fact that the Ain’t Rights are witnesses to murder and know more about his backwoods operation than they should. We also have Anton Yelchin (Chekov from the “Star Trek” film franchise) as Pat, the Ain’t Rights’ feckless lead singer; British actress Imogen Poots as Amber, a Nazi-skin girl who may or may not be defecting, and Alia Shawkat of “Arrested Development” fame as the slightly butch Sam, who plays bass in the Ain’t Rights and serves as the band’s semi-adult spokesperson.

If this movie drives you toward questions like, Who the hell made this? And what else has he made? I can promise you won’t be disappointed. Saulnier feels like a director out of the Hot Tub Time Machine in many ways, making self-consciously unfriendly and even “underground” movies rooted in a deep appreciation for subcultural byways that the rest of the world has either forgotten about or packaged and sold. Admittedly, his hot tub doesn’t smell too fresh and has mysterious lumps floating in it, but that’s a big part of the Saulnier magic. I wouldn’t have heard of him either, except that his hilarious Brooklyn-set horror farce “Murder Party” came out in 2007, when I was following indie genre film obsessively. It jumped out right away as not quite like anything else. (I still giggle when I remember the mad killer armed with an electric chainsaw, which keeps coming unplugged.)

It took six years after that for Saulnier to get another feature made; his IMDB profile suggests he’s made his living as a camera operator on “Oprah’s Master Class.” But the wait resulted in “Blue Ruin,” the extraordinary 2013 rural revenge thriller that played the Cannes and Toronto festivals but never found much of an audience. It was perhaps too gory and too downscale for whatever remains of the art-house audience, but also too slow and too morally oblique for the Fantastic Fest genre-movie crowd. I might want to argue that “Blue Ruin” is a better movie than “Green Room” because it’s more original, but that’s only a question of taste. “Green Room” is just as masterfully controlled and just as loaded with black humor and plot twists, but it belongs to a more recognizable genre: This is a cabin-in-the-woods film, not dissimilar to “The Evil Dead” or “From Dusk Till Dawn,” except that our band of roguish heroes are besieged by wannabe commandos from the Fourth Reich rather than literal zombies or demons.

I’m not surprised to learn that Saulnier was once in a punk band; if you’ve spent any time on the fringes of that scene you will recognize that the portrayal of the Ain’t Rights and their struggle isn’t satirical or exaggerated in the least. I called them a D.C. band earlier, but Sam corrects a small-town radio interviewer on that one: They’re actually from Arlington, just across the river -- the kind of micro-distinction that can contain multitudes. (I have bitter memories of being derided in San Francisco punk clubs for the gross ideological crime of being from Berkeley.) Their cross-country trek in an ancient Chevy van, largely fueled on gas siphoned out of other people’s parked cars, reaches its nadir in some small Oregon city (is it Bend? Grants Pass? Ashland?) with a “headline gig” in a Mexican restaurant, for which they are paid $35.

Faced with a possible beatdown, their local punk-nerd host (David W. Thompson) has a suggestion: His cousin runs a club out in the boonies! Yeah, it’s all “boots and braces” — that is, skinheads with dubious political views — but the Ain’t Rights can make enough money from one gig to buy gas for the entire trip back to Washington (or Arlington). And it all goes great! OK, the whole environment at Darcy’s rural stronghold is scary as hell, but as Saulnier captures brilliantly, this musical form was always rooted in violence and aggression and attracted all kinds of disturbed and disturbing people, but those elements were almost always sublimated. The Ain’t Rights play their set and the crowd pretty much likes them despite their cover version of the Dead Kennedys’ 1981 classic “Nazi Punks Fuck Off.” (Or maybe because of that, who knows?) Anyway, the immanent hostility is kept to a manageable level, the band gets its money in cash and starts to load out. Oh, wait: There’s a dead girl in the green room.

We don’t even encounter Stewart’s Nazi-punk paterfamilias Darcy, who hands out “red laces” to his most devoted followers (you can probably figure out how they earn them), until after the discovery of the girl with a knife in her head. Pat, Sam and their bandmates Reece (Joe Cole) and Tiger (Callum Turner) have phoned 911, and the cops are on their way. But Darcy’s reasonable-sounding lieutenant Gabe (Macon Blair) is “handling” the situation, and the band has been confined in the green room with an impressive and armed individual known as Big Justin (Eric Edelstein) — just until things blow over, of course. Darcy is at first just a voice through the door: Yes, things have gone south a little and that’s a shame, but he’s quite sure they can find a solution to this problem. Stewart plays this guy as, well, a Patrick Stewart character, wise, rueful and troubled about the evident amorality of the task before him. Which is somehow much worse than making him a racist lunatic.

Amber, Imogen Poots’ character, is locked in with the band (and, of course, Big Justin and the dead girl) and serves as an important X factor in this twisty tale. She knows who killed the girl and why, or says she does; she knows that Darcy’s only possible solution to this problem involves killing them all, but only in a manner than can easily be covered up. There are no magical or supernatural elements to “Green Room”; it only feels like a time-space loop that always brings the diminishing and increasingly damaged cast of characters back to that oppressive little room, with its encrusted levels of neo-Nazi memorabilia and its growing pile of bodies.

Only a limited number of things can happen in this kind of movie, of course, but Saulnier manages pace, tone and storytelling so adroitly that you won't quite expect any of them to happen when they do, or even how. It’s a long and delirious night of bloodshed, fire extinguishers, attack dogs (who respond to German commands, of course) and surprising revelations. Faced with imminent death, would you tell the truth about your “desert island band,” or maintain your coolness? One of the characters in “Green Room” shrugs this off; he’s sticking with the Misfits, the hardcore progenitors of the early ‘80s. But another of these trapped and hunted punk-rock misfits furtively whispers, “Madonna.” If you had to guess, which one do you think survives?

“Green Room” opens this week at the AMC Lincoln Square and Regal Union Square in New York and the ArcLight Hollywood in Los Angeles, with wider national release to follow.