The Fed needs a revolution: Why America's central bank is failing — and how we can make it work for us

A bold new plan with links to the Sanders campaign has proposed taking the Federal Reserve, at long last, public 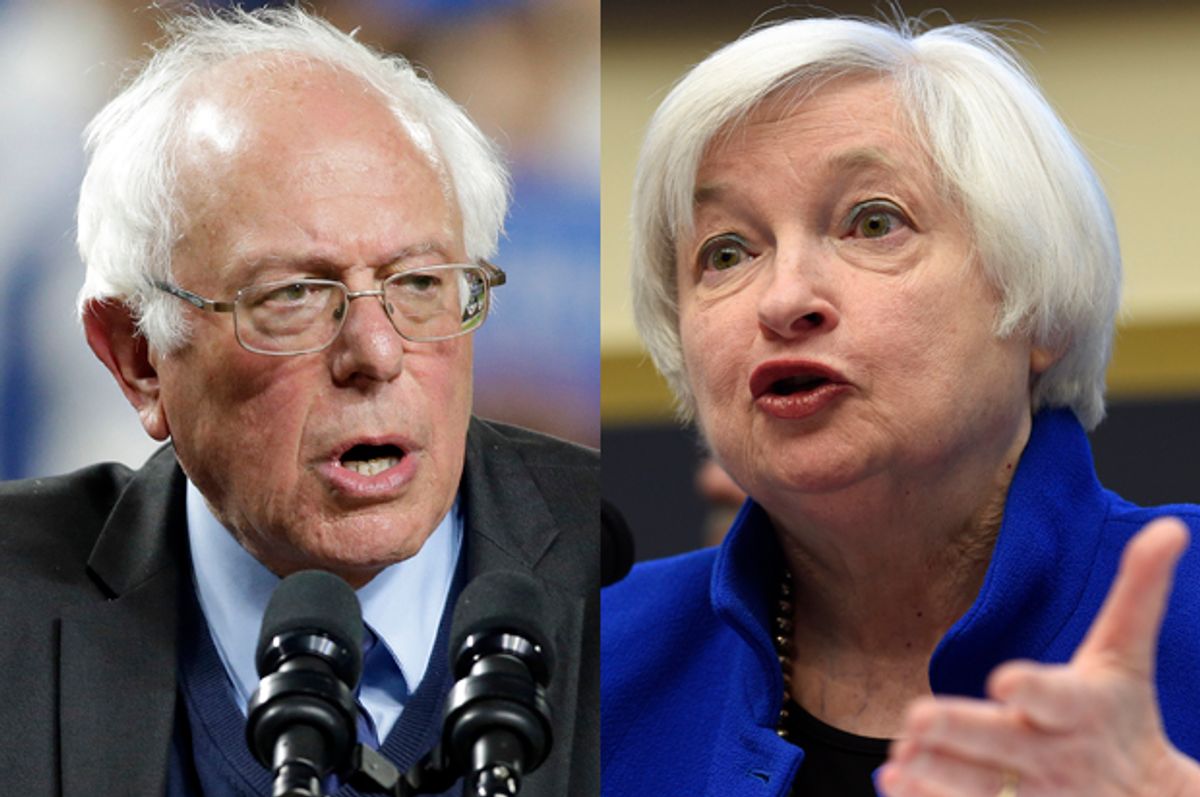 One reality hanging over the presidential election and our politics in general is this: No matter what terrific plan a politician has for creating jobs and boosting wages, it must contend with the Federal Reserve’s ability to unilaterally counteract it. If the Fed decides higher wages risk inflation, they can raise interest rates and deliberately strangle economic growth, reversing the wage effect. Why come up with ways to grow the economy, then, if the Fed will react by intentionally slowing it?

The reason the Fed operates as a wet blanket on the economy has to do with who really controls the institution. If the desires of bankers and the rich outweigh the desires of laborers, then their fear of inflation (which cuts into their profits) will always take precedence over full employment. Former Fed Chair Ben Bernanke unwittingly gave a perfect example of that yesterday. Talking about how the Fed could institute “helicopter drops” of money to supplement federal spending and jump-start the economy, he stated from the outset, “no responsible government would ever literally drop money from the sky.” Who sets the boundaries of what’s “responsible” matters a great deal here.

To make the central bank work in the public interest rather than the interests of a select few, you must reform the very structure of the Federal Reserve. That’s the purpose of a new proposal from Andrew Levin, an economics professor at Dartmouth College and former advisor to Fed Chairs Ben Bernanke and Janet Yellen. In conjunction with the activist group Fed Up, which advocates for pro-worker policies at the Fed, Levin has devised a framework to make the central bank a fully public institution, with all the transparency and accountability demanded of other government entities.

It’s such an important idea that Warren Gunnels, policy director for Bernie Sanders’ presidential campaign, talked it up yesterday on a conference call with Levin. While stopping short of endorsing taking the Fed public, Gunnels did say, “Senator Sanders believes we need to made the Fed a more democratic institution, responsive to the concerns of all Americans, not a few billionaires on Wall Street.”

Right now, the Fed is a quasi-public, quasi-private hybrid, taking advantage of that status to maintain high levels of secrecy. Members of the Federal Reserve Board of Governors are nominated by the President and confirmed by the Senate, like other federal agencies. But the twelve regional Federal Reserve banks are legally owned by commercial banks in each of those regions. Banks like JPMorgan Chase and Wells Fargo hold stock in these regional banks, which happen to be one of their primary regulators.

This was how central banks worldwide operated at the time of the Fed’s founding, but that has changed. “Every other central bank around the world is fully public,” Professor Levin said, citing the Bank of Canada’s shift in the 1930s and the Bank of England in the 1940s.

Not only does having private banks own a chunk of the Fed raise questions about regulatory supervision, it implicitly privileges banker concerns over the public at large. This is particularly important because the Fed has failed as an institution consistently over the past decade.

First it failed to identify an $8 trillion housing bubble, along with increases in leverage and derivatives exposure that magnified the housing collapse into a larger crisis. Then, it failed to deploy all its policy tools and allowed a slow recovery to take hold that left millions of workers behind, as growth never caught up to its expectations. British economist Simon Wren-Lewis believes the third big mistake is happening now, through premature interest rate hikes to return to “normal” operations. “Central banks are wasting a huge amount of potential resources” by tightening too quickly, Wren-Lewis says. For everyday Americans, that translates into millions more people out of work than necessary.

So Levin’s plan would cash out the banks’ stock, and begin to remove their influence over the Fed. The board of directors of the regional Fed banks, which currently includes commercial bank executives, would be chosen through a representative process with mandates for diversity (no African-American has ever served as a regional Fed president) and a variety of viewpoints. Nobody affiliated with a financial institution overseen by the Fed could serve on any regional board.

These newly elected boards of directors would choose the regional presidents, which have a say on monetary policy decisions. That selection process would include public hearings and feedback. Under the current system, Fed presidents are re-elected through a pro forma process, with no opportunity for public engagement. Four of the 12 regional presidents were formerly executives at Goldman Sachs, and it’s hard to call that a coincidence.

In addition to breaking the conflict of interest inherent in current Fed governance, making the institution public would subject it to disclosure requirements, Freedom of Information Act requests, and external reviews that all other public agencies must submit to. Levin’s proposal calls for an annual Government Accountability Office review of Fed policies and procedures, and would allow the Fed’s inspector general new authority to investigate the regional banks.

The Levin proposal too often makes concessions to preserving central bank “independence,” like preserving the regional structure and giving Fed officials nonrenewable seven-year terms, which seems a little arbitrary. This impulse also led Democrats to reject Sen. Rand Paul’s legislation to audit the Fed earlier this year. The rhetoric of Federal Reserve “independence” conceals an institutional capture that allows it to ignore workers’ needs in favor of the wealthy. And its persistent failures and banker influence weaken the case for that independence.

Nevertheless, the heart of the proposal is to return democracy to the Fed, so the institution will edge away from its commitment to capital over labor. “The fundamental piece is that the Fed must be a public institution,” said Ady Barkan of the Fed Up Coalition.

Liberals too often ignore the Fed and the role it plays in the economy, but that’s starting to change. An obscure piece of the Federal Reserve Act statute identified by then-House staffer Matt Stoller led to a remarkable cut of billions of dollars in subsidies to big banks last year, under a Republican-majority Congress. Now the Fed Up coalition is not only rolling out this reform plan, but pushing the presidential candidates to answer whether the Fed should deliberately slow down the economy, make sure their institution looks like the general public, and reduce the power of private banks on its operations. (Bernie Sanders laid out his views on Fed reform in the New York Times last December, some of which intersect with the Fed Up proposal. Warren Gunnels, Sanders’ Policy Director, would only say that the Fed Up plan “deserves serious consideration.”)

A public, inclusive debate over Fed transparency and accountability is critical, given the importance of this institution to the economy. “These reforms would put the Fed on a path to serving the public for the next 100 years,” said Professor Levin. And that has to mean all the public, through democratic principles, not just the executives at our biggest banks.