The South's new re-segregation plan: The Koch brothers, ALEC and the sneaky scheme to undo Brown v Board of Education

Sixty years after Brown, Southern segregation is on the rise -- and "school choice" is its vehicle 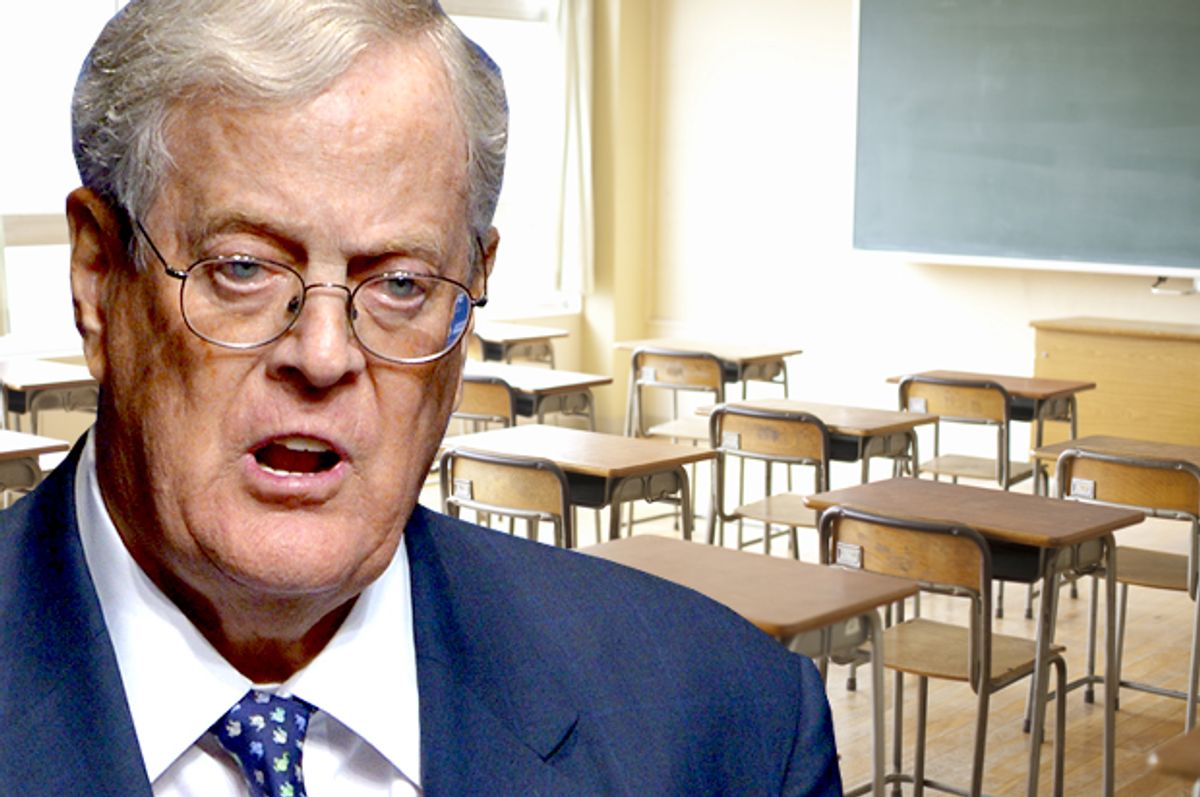 The segregated states of the Deep South fought desegregation tooth-and-nail for years after the 1954 Brown v Board of Education decision. The white leadership did not want white children to go to school with black children, period. Their first response was to declare that they would never desegregate: never, never, never. As pressure from the federal government and the courts accelerated, Southern officials found a new tactic to preserve segregation: school choice. School choice, they knew, would protect the status quo: White children would "choose" to stay in white schools, and black children would "choose" to stay in black schools. Eventually the federal courts struck down every school choice plan, recognizing that it was a blatant effort to avoid the letter and spirit of the Brown decision.

But here we are, 80 years later, with segregation on the rise and school choice in the ascendancy as its vehicle.

Southern states are adopting charters and vouchers because their long-frustrated effort to return to segregated schools is at last feasible. Not only is it feasible, in some circles, it is fashionable. Now the media celebrates all-black schools and ignores the fact that they are segregated. The subtext is: Look at this! An all-black school with high test scores! Isn't that great?

Other states, such as Ohio, Nevada, Indiana, Louisiana, Florida and Maryland, have endorsed voucher plans (which are never called vouchers but some euphemism, like "opportunity scholarships.) The irony is that their state constitutions explicitly prohibits the diversion of public school funds to religious schools, yet legislators proclaim their fealty to constitutional principles even as they pass laws to send public money to religious schools. Vouchers for children with disabilities is the camel's nose under the tent, to get the movement started. It is a measure supported by ALEC (the American Legislative Exchange Council), the Koch-funded advocacy group for privatization and deregulation.

The rise of vouchers is not a response to popular demand. Vouchers have been put to voters in several states, and every time they have been soundly defeated, even in red state Utah. The revival of the voucher movement is nothing more than ideology and politics taking charge of schooling. School choice is not the "civil rights issue of our time," as its proponents claim; it is the predictable way to roll back civil rights in our time.

After 25 years of experimentation with charters and vouchers, we know that they do not get better results than public schools unless they choose their students and kick out the ones who don't have high test scores and don't adhere to strict requirements for obedience. Charters and vouchers drain money from public schools, which still educate the vast majority of children. Once school choice gets rooted in a state, the subject consumes all the energy of legislators. It is as if the 90 percent who attend real public schools became invisible.

Despite the absence of any advantages and the presence of scandals, frauds, and discrimination, more and more states are falling victim to the false promise of "school choice." As one Florida superintendent explained it to me, charters enable parents to keep their children away from "those children." Both charters and vouchers increase racial segregation, religious segregation, and economic segregation.

These trends are ominous for our democracy.