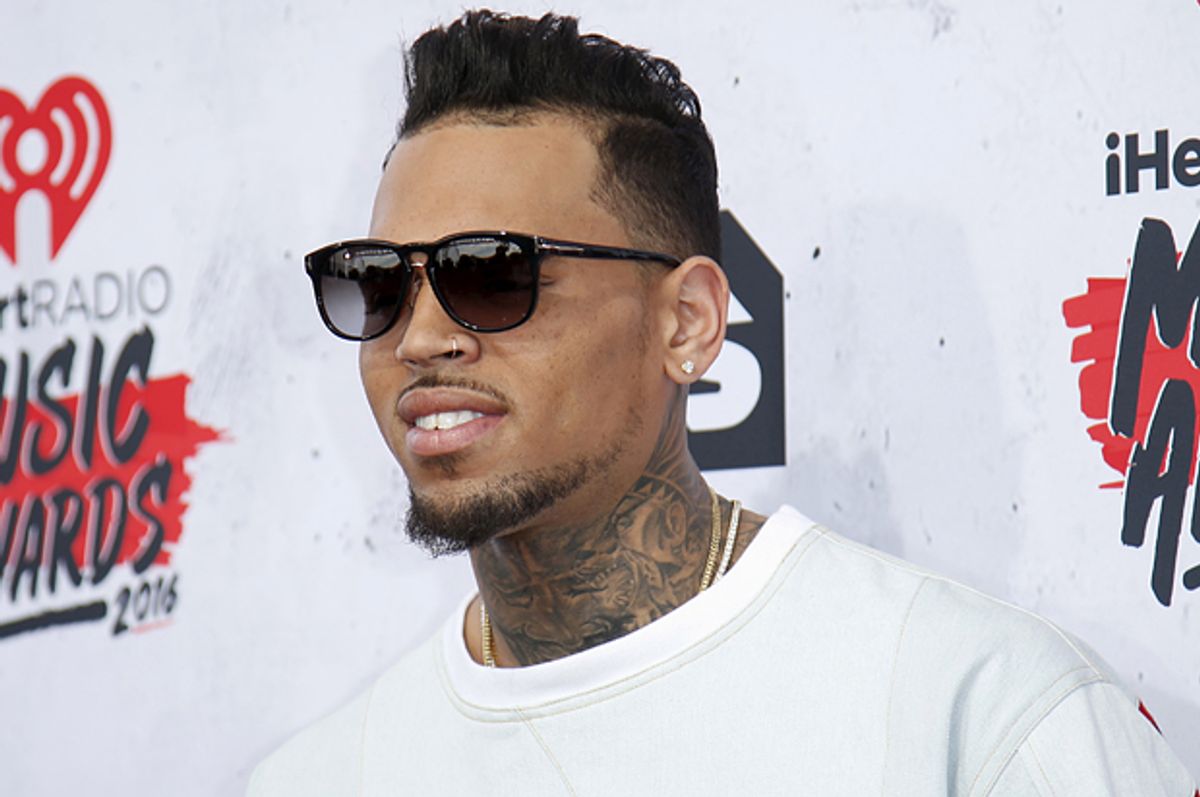 It has been more seven years now since the night Chris Brown assaulted his then-girlfriend Rihanna. Seven years since the then 19 year-old pleaded guilty to felony assault. Since then he's sold millions of albums, has won a Grammy, Billboard Music Award, and MTV Video Music Awards. He's become a father. And his steadfast fans will tell you he shouldn't be punished forever for the rash and admittedly violent actions of his past. But with the release of a trailer for his new documentary, it still seems like a reasonable question to ask: When will Chris Brown start behaving like a grownup?

The film, "Welcome to My Life," certainly appears to take the viewer on a very calculated narrative arc. Somber music plays as Brown walks slowly to take his seat on a metal chair. The narration tracks his rise from "just another kid in high school" to "one of the biggest stars in the world." Famous supporters and collaborators like Jamie Foxx, Pharrell and convicted rapist Mike Tyson weigh in — via a bank of snowy TV sets straight out of the "Don't You Forget About Me" playbook — to describe him as "truly gifted" and a "superstar," while others ominously intone that the poor guy "Grew up so fast, he didn't really get to have a childhood."

And you know exactly where this is headed — the moment when Brown, in his words, "went from being America's sweetheart to being Public Enemy Number One." Actual soundbites used by other people to describe the attack in which he pummeled his girlfriend's face: "a mistake because he needed help," and "the worst day of my life and probably his life." Gosh, it sounds like beating up a woman was a really hard time for him.

Brown acknowledges the experience made him feel like "a monster" and caused him to "think about suicide," before the trailer ends with him once again triumphant in front of his legions of fans. But what's telling about the clip is what's not included in the short trajectory of fame to fall from grace to getting back on top. Like the fact that the guy has continued, over the span of the past several years, to behave like a total ass. In 2011, he went ballistic on the set of "Good Morning America," screaming and breaking a window. He's bragged to the critics to "Hate all u want becuz I got a Grammy now!" In 2013, he was charged with a misdemeanor over an altercation in a Washington, D.C. hotel. He's been arrested on a parole violation. There have been other incidents from America's sweetheart along the way, too.

Just last month, Brown took the time to make fun of Grammy-nominated singer Kehlani Parrish after her reported suicide attempt, insisting, "There is no attempting suicide. Stop flexing for the gram. Doing shit for sympathy so them comments under your pics don’t look so bad." And all the while, he has continued to present himself as quite literally a martyr.

Brown is not some guy who has learned from a terrible mistake in his past. He's a full-time, ever-evolving troll who just happens to make music that makes him and a lot of other people a ton of money. And his latest endeavor is just one way of flaunting his apparent invincibility. "If there was ever a doubt in your mind that Chris Brown was done, he was finished?" he asks in the trailer. "I wouldn't bet on it."