Don't write off Mississippi: Before you dismiss us as "a garbage state," listen to the queer Southerners you're leaving behind 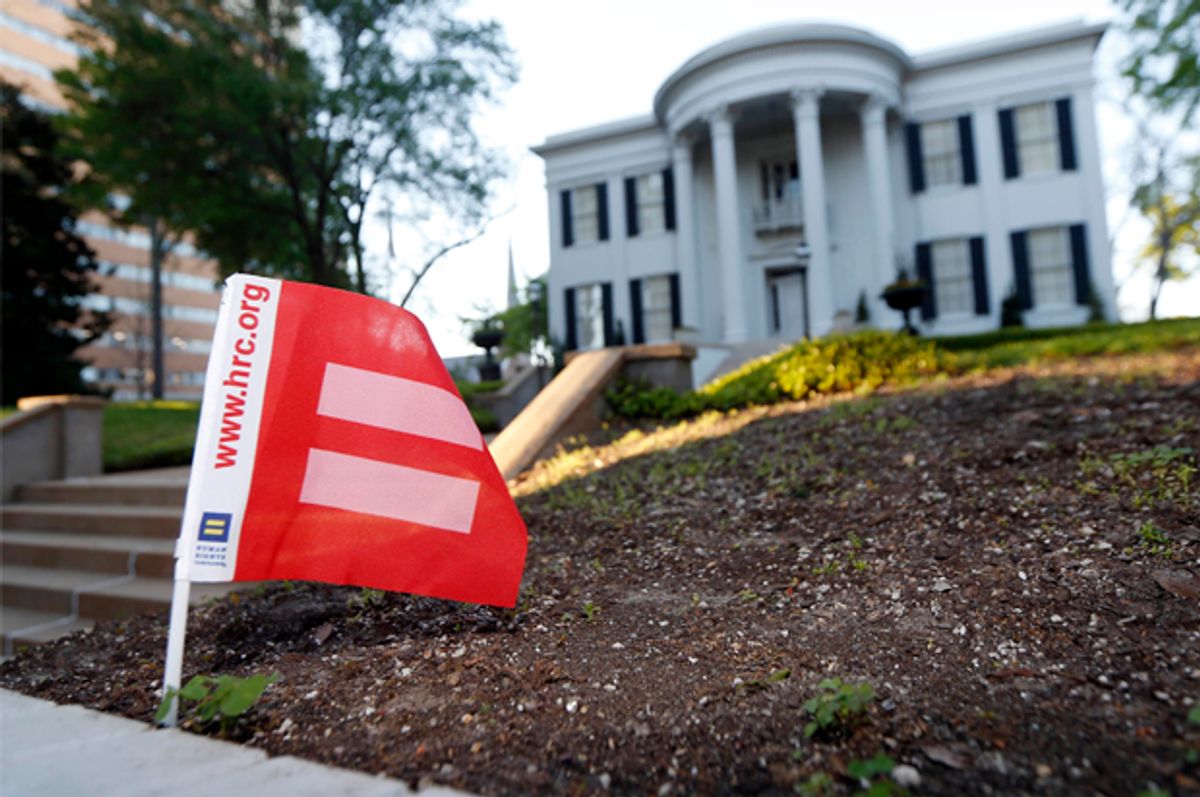 A Human Rights Campaign banner flies on the grounds of the Governor's Mansion in Jackson, Miss., April 4, 2016. (AP/Rogelio V. Solis)
--

There is an ineffable magic to the American South. Most Southerners understand this already; and will agree without further discussion. There are very few words one can accurately ascribe to the kind of magic unfolding in humid places carrying seven kinds of sweet smells on a sticky summer breeze; complicated places, thick with tragedy—and the resulting resilience. Evenings are alive and teeming; alight with swarms of stinging insects and cicadas screaming over the subtle symphonies of cricket song. In this wildness there is something timeless, something arcane. When I talk about where I was born and raised, my accent gets a little stronger with enthusiasm. I start sounding like I really am from Mississippi.

I’m a proud Mississippian. I’m an intersectional feminist. I’m also bisexual. The balance of these identities isn’t as perilous as public conception would suggest. When I first stutter-stepped out of the nest and made my way up North for film school, I already knew that I liked kissing girls. I had since I was little. It was a secret, but I knew who else back home carried the same secret. I knew how many of us there were.

When Gov. Phil Bryant recently passed anti-gay legislation disguised as “religious freedom” in Mississippi, I witnessed the following dynamic unfurl online again and again like overlapping waves: people in Northern states laughed and mocked the backwards, bigoted attitudes of the South as a whole, while my friends and family in Southern states simultaneously began to display the five stages of grief. While my Yankee friends jeered and joked about my home being full of anti-LGBTQ scumbags, I watched my queer community in Mississippi erupt and immolate with their disbelief, their rage, their tearful, terrified, heartache—and it’s this precise discrepancy that halted my own grief from progressing. I’m stuck at bargaining.

This kind of venomous public reaction is not an unfamiliar phenomenon, or even just limited to oblique expressions of misguided disappointment from Northerners on social media. Disney and Marvel threatened to boycott Georgia over anti-gay legislation. Paypal eliminated the creation of 400 jobs when they cancelled the construction of a new facility in North Carolina because of a law discriminating against transgender people. Last year, film industry implants in Louisiana threatened to flee with all their big Hollywood money because of anti-gay legislation. The efficacy of these actions is inarguably potent. Money talks. Capitalism is louder than compassion.

These controversies ignite similarly, sparking the same misinformed rhetoric from the peanut gallery living above the Mason-Dixon line. Endless versions of indignant outrage are parroted that condemn an entire Southern state as a monolith of hate and held accountable. No matter the shape it takes, however, these expressions of rage emanating from straight “allies” operate under a singularly misguided belief: that I do not exist. That there are not transgender men and women in North Carolina who would have benefited from a job at a company that protects them, despite state lawmakers hostile to their existence. All of this magnanimous outrage does not extend to the very group for which it surfaces—Southern queers. Instead, these powerful, “inclusive” entities threaten to pack their things and go; leaving us high and dry, and fighting alone.

Every time this exhausted reiteration of “let Mississippi and Alabama Darwinism themselves into non-existence” is recycled, it is hurtful to members of the LGBTQ community there, even if it’s being expressed on our behalf. It functions from a position of fallacy that we A) do not exist and B) if we do, only exist in insignificant numbers. While I would not say the environment at large in Southern states is safe for minorities, I will say this: Mississippi does not hold the patent on pain.

California has more active hate groups than any other state except Texas. California also executes prisoners at a rate that rivals Texas. Montana is a haven for anti-government white supremacist militias. New York state Gov. Andrew Cuomo has called for a travel ban to Mississippi, explaining: “Discrimination is not a New York value,” and yet only recently expanded through executive order protections for transgender New Yorkers. New York, with 44 SPLC-tracked hate groups, even has their very own Ku Klux Klan chapters. Three dozen Republican state legislators from Minnesota have sent letters of support to North Carolina Gov. Pat McCrory over the state’s new anti-trans bill. Ted Cruz, potential presidential candidate, openly supports it. Anti-LGBTQ bills have been introduced or are active across the country now.

These ills are interconnected enough to form a feedback loop. Underprivileged citizens in Mississippi have not been granted access to the tools and resources necessary for change. Despite these systemic hostilities—Mississippi is not white. Never has been. It’s obviously not straight. While it may be enemy territory for queers—we are still here. Mississippi has the highest percentage of LGBTQ couples raising children than any other state. Thousands of gay Mississippians are ready to get married. Mississippi is, simply, home.

Sharon Stone has scrapped plans to film in Mississippi. There are now travel bans to Mississippi. And it’s not just Mississippi that suffers—the mayor of Los Angeles also called for a travel ban to North Carolina, a state currently getting hit hard in the form of multiple travel bans and lost concert revenue. That major companies are also turning away from Southern states over anti-LGBTQ legislation is cartoon-level laughable; after all, they only got what they paid for.

Rev. Laura Brekke, 30, a chaplain at Santa Clara University, grew up in Georgia and spent time living in North Carolina and Alabama. Of HB1523 she says, “I hate that Southern states have yet again allowed bigotry and fear to be the foundation for lawmaking. I hate that lawmakers in Southern States feel the need to police people’s intimate lives. […] As a bi woman, and a proud Southerner, it goes against the culture of hospitality and welcoming that I was taught growing up in the South.”

Manisha Campbell, 28, is an out lesbian living in Oxford, Mississippi. We grew up together. She says that while it is dangerous in certain areas for LGBTQ folks, most of them know which areas to avoid—places like McComb or Pontotoc. Manisha assures me that she’s in no immediate danger and “makes [herself] comfortable” everywhere she goes. When I asked what she thought about people outside the South reacting with ideas like this tweet calling Mississippi a "garbage state," or companies pulling their businesses, she answered: “Honestly, those people don’t think about how we feel.”

Southern queers are getting caught in the crosshairs of consequence. We are being affected by the liberal open-fire against legislation that already had us in its sights. When popular opinion is that the South is worthless and full of worthless people, it grants the homophobes a callous, if tangential, victory in public opinion. Adhering to this idea of the South as belonging to the bigots is ignorant. HB1523 does not reflect the entire population’s opinion; it reflects that of the hateful conservative elite who wrote it, and the ignorant voters who helped it squeak past.

It’s sinister entities like Gov. Phil Bryant and Alabama Chief Justice Roy Moore who’re carrying on the grandstanding tradition of denying civil rights to others as it was done for centuries before them; white men who’ve lived in the South for generations and hoard power to uphold these so-called Southern values that the rest of the country mistakenly insist Southerners writ large represent.

In terms of the recent wave of anti-LGBTQ legislation, a more accurate target to take down would be Mathew Staver, Kim Davis’s attorney. His conservative group Liberty Counsel planted lawyers from their organization into 50 states to help draft anti-LGBTQ legislation. It’s worked in 20 states so far. When lawsuits erupt around these laws, laws they helped create, Liberty Counsel then generously offers to represent the offended conservative party.

The wretched successes of Southern oppression are hinged entirely upon the complete and total elimination of minority voices, and every time a straight ally up North publicly blusters about destroying the whole of the South, the end result is congruent. Either way, I have been erased.

I feel so strongly about this that I came out of the closet to write about it. I came out on Facebook without even texting my Mama down in Texas the courtesy of warning shot first. When I reached out to my Southern friends and family, I felt fearless, determined, and adamant—because I knew. I knew that I could take a leap of faith and flourish. I trusted where I come from. I trusted the community that made me. I came out to everyone I know in Mississippi and my faith was rewarded; I was met with open arms. I watched my anger get swept up in a digital wave and carried away; shared by other queer people with mirrored experiences across North Carolina, Louisiana, Alabama, Arkansas, Tennessee, and Georgia. I watched straight Southern allies fall in line, one by one, and I nearly wept with the sense of welcome I felt. This is Southern hospitality.

This is part of the magic; the resilience we understand as Southerners, without being able to articulate. If you knew the South like we know the South, you would know the warmth and the rage that exists side by side and somehow harmonize. You would know how we fight. You would know the pockets of ferocity that would send racists running for the hills. You would recognize anti-gay legislation for the death rattle that it is, and support the Mississippi businesses that speak out against hate. You would support the ACLU and other organizations as they challenge these laws in federal court. You would stand with us, not against us. To Northern allies: Please don’t give up on us yet. Please don’t let us be forgotten. Please don’t let them do this to us. Don’t leave Southern queers behind.

Leah Williams is a writer from Oxford, Mississippi. Her first young adult novel, The Alchemy of Being Fourteen, was released September 2015. You can find her on Tumblr or Twitter.