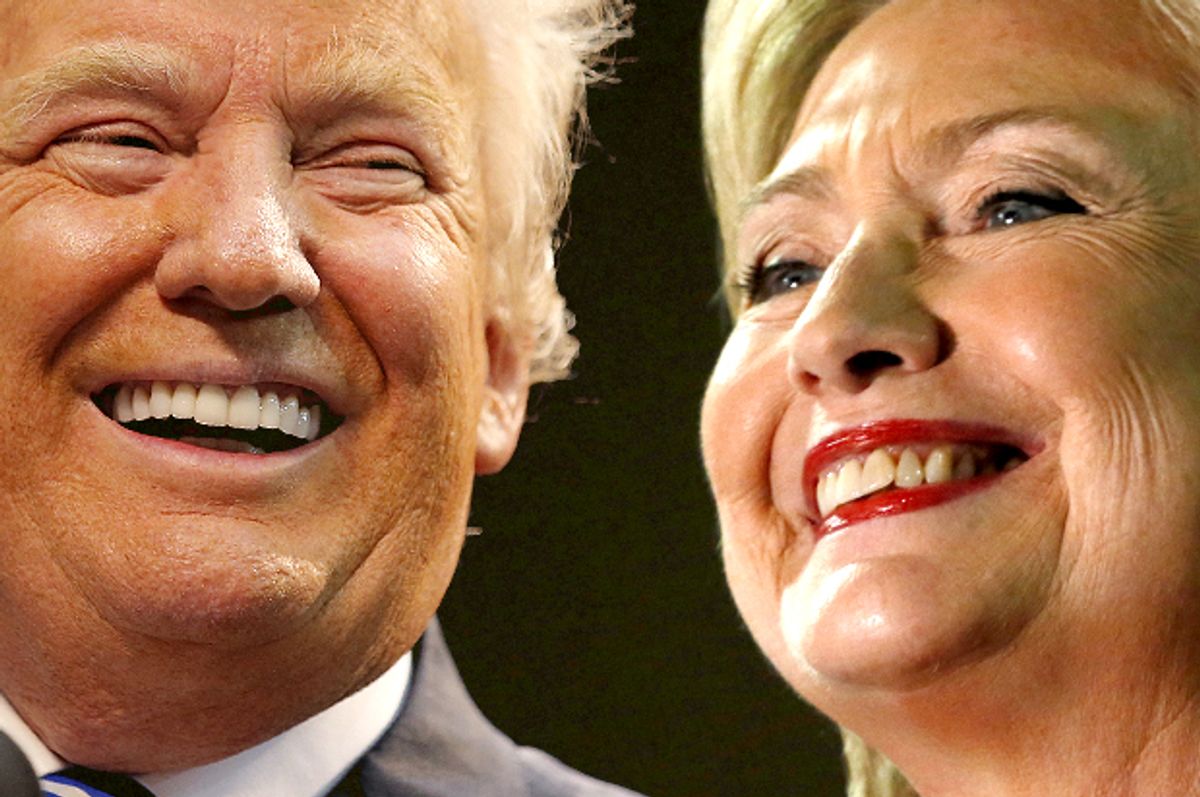 In the wake of Hillary Clinton and Donald Trump’s big wins in the New York primary, the chaos of the 2016 presidential campaign seems to be assuming more familiar dimensions. In recent weeks I’ve been focused on the big-picture questions emerging from this extraordinary year, and I still think those are unavoidable. We’re heading into a general election with no clear precedent, in which the two parties’ prospective nominees are viewed in overwhelmingly negative terms by most of the public. If “none of the above” were on the ballot in a Clinton-Trump race, it might win an outright majority.

Both political parties are going through intense internal turmoil, not to mention a refusal to acknowledge their own increasing irrelevance. Independents have been a larger group than either Democrats and Republicans for most of the last 25 years — and the day when they outnumber both parties put together is not far away. Both parties have now picked their nominees, in effect if not in fact, but that will do nothing to resolve their internal struggles.

If the conflict between Republican leaders and the party’s electoral base is more obvious at the moment, a similar split among Democrats is not far behind. Bernie Sanders will not be the Democratic nominee (in large part because he isn’t a Democrat), but he has exposed an immense generational and ideological gulf within the left-liberal coalition, and has channeled or galvanized a reborn activist consciousness that is fundamentally opposed to the Hillary Clinton model of top-down, incremental, organization-based politics.

On the other side of the ledger, we see a funhouse mirror image: Donald Trump will be the Republican nominee, in large part because he isn’t a Republican — which might be all we need to say about that party’s confusion and dysfunction. After decades of luring the white working class with trumped-up cultural issues (ha ha!) and thinly veiled racism, only to deliver trickle-down, CEO-friendly economics that drove those people further into poverty, the GOP’s Georgetown leadership caste has encountered one of the great karmic laws of the universe: Payback’s a bitch.

With the New York results signaling that the primary campaigns have entered the home stretch, it may be a useful moment to look at some of the more granular tactical or strategic questions lingering over the 2016 race. Not so much in terms of horse-race dynamics — especially since the horse race is over, as far as I can see — but because they may shed some light on the larger, murkier philosophical issues surrounding the future of our so-called democracy. These questions fall into two useful categories: Things We Already Knew (but that New York reinforced), and Things We Didn’t Understand (and mostly still don’t).

What We Already Knew, Or Should Have Known

Clinton and Trump remain on course for first-ballot victories at their respective conventions. All other scenarios require an elaborately constructed alternate universe worthy of Philip K. Dick. Both frontrunners hold big leads over their opponents both in terms of pledged delegates and popular votes. There is no longer any plausible pathway in which either Sanders or Ted Cruz can overtake his party’s frontrunner in pledged delegates before the convention. No such pathway existed even before the New York votes were counted, and now its last traces have been obliterated. There is no example in modern political history of an underdog staging a come-from-behind victory late in a primary campaign. This isn’t a baseball pennant race, where a team might unexpectedly reel off a dozen wins in a row. The mysterious commodity known as “momentum,” in this case, is a matter of media perceptions and mass psychology, both of which are firmly cemented at this point.

Sanders’ brain trust may wish to claim, as of Wednesday, that they knew all along they probably wouldn’t win New York, and always thought the Pennsylvania primary next week was more important. Evidence suggests otherwise. New York was Sanders’ last chance to turn the tide, and his last chance to prove that he could win a closed-primary state where only registered Democrats vote. He fought hard, and didn’t even come close.

Sanders held numerous large and enthusiastic rallies from Buffalo to Brooklyn; over the course of the past week he drew his two biggest crowds of the entire campaign, first in Washington Square Park and then in Prospect Park. If primary elections were decided by fervor, he’d have won easily. In the end, he failed to make significant inroads in the African-American community and lost badly in New York City. A statistical tie or near-miss, in the mode of Iowa, Nevada and Missouri, would at least have been spin-worthy, and might have sustained his apparent momentum a few more weeks. Instead, Clinton won roughly 58 percent of the Democratic vote, and the long, strange trip of the Sanders candidacy is just about over.

Ted Cruz never thought he could beat Trump in New York, and John Kasich didn’t either. But they both got obliterated, and even the moral victory that Kasich was hoping to score among affluent suburbanites in Westchester County and Long Island didn’t materialize. Cruz has now pretty well run through all the states where he can win, having been revealed as a Bible Belt candidate with an exceedingly narrow demographic. Kasich never won any states in the first place, except the one where he happens to be governor. His story is one of the most bizarre in this year of bizarre events: Polls suggest that if the whole country were voting Kasich could beat Trump or Cruz or Clinton easily, but he has no shot at the Republican nomination. (Sanders, who polls by far the best among all five people still running for president, faces a similar predicament.)

To this point, Cruz, Kasich and Sanders are all vowing to pursue their cause to the party conventions in quest of some back-room miracle. This kind of dirty talk about a “contested convention” or “brokered convention” (which are not the same thing) gets political reporters breathing heavily and paging through the archives, but I have a word of advice: Don’t bother. OK, that was two words. But there hasn’t been anything close to a contested convention since the Republican contest between Gerald Ford and Ronald Reagan in 1976, and no convention in either party has required a second ballot since 1952. I’m no mathematician, but that’s a long time; the idea that the convention might be anything more than an orchestrated showpiece for bland, patriotic messaging and party unity (even if imaginary) has become a political no-go zone. Both parties may well be destroying themselves, but they won’t do it on TV during their summer prime-time show.

We don’t know what the Bernie Sanders endgame will look like, or what it might hope to accomplish — either in terms of short-term strategic gains or long-term political objectives. There was a moment, a few weeks ago, when Sanders could have withdrawn from the race and forged some sort of backstage political alliance with Hillary Clinton, dragging her a bit further to the left and extracting some more or less meaningless promises about cabinet officers or specific policy proposals or whatever. I’m not suggesting that would have been a great idea then, and there’s surely no advantage to either of them now that the race is effectively over.

In the immediate aftermath of the New York blowout, Sanders campaign manager Jeff Weaver and strategist Tad Devine are still insisting they’ll push on to the convention, in hopes they can deny Clinton enough delegates for a first-ballot victory. After next week’s primaries in Maryland and Pennsylvania, they may have to shelve that dubious theory, but it’s probably not the real goal. Beyond giving Bernie one last chance to speak on national TV before he goes back to the Senate, and offering his supporters a chance to blow off some steam in public, what’s the point? I can offer a hypothesis, related to my earlier hypothesis that Sanders has half-accidentally sparked the rebirth of “class consciousness,” almost but not quite in the old Marxist sense.

If you can show the world that the forces of Clintonism may have won this battle, but in the fullness of time may yet lose the war, then you’re making a statement that goes beyond symbolism or political vanity. For that matter, as symbolism and political vanity go, offering Bernie Sanders a big sendoff in what will surely be his final moment in the national spotlight seems worth doing. Even in this extraordinary year, it’s been clear from the outset to anyone who can count that Sanders had virtually no shot at the Democratic nomination. I have argued all along that the central question was his legacy: What becomes of the Bernie Sanders movement after Bernie Sanders is defeated?

The usual answer, at least in American politics, is that nothing happens: The insurgency dissipates and the Democratic Party gets back to business, i.e., shining the shoes of the rich, apologizing for endless war and endless surveillance, recoiling in horror from any talk of class-based economic justice and, of course, losing every possible election from coast to coast except the quadrennial White House tournament. At least until the next cycle brings forth another wave of discontent and then it’s wash, rinse, repeat. That’s entirely likely to happen again this time, but there are stirrings of other possibilities in a few local races across the country and far more important, in the growing sense that the political system is no longer rooted in the popular will and can potentially be redeemed or reformed. Or overthrown.

Unless the Bernie-fied shift in consciousness empowers democratic socialists and similar outsiders to challenge the Democratic Party establishment and its candidates from the left, as the Tea Party and before that the Christian Coalition did so effectively on the right, then the whole thing will have been — no, not pointless, that’s too strong. But deeply frustrating. This moment of defeat for the left offers a world of possibility — indeed, it offers the sense that another world is possible, the tangible possibility of revolution. But it would be diabolically easy to let that possibility slip away.

We also don’t know how Kasich and Cruz and the rest of the Republican hierarchy will make peace with the torch-bearing peasantry of Trumpmania, or whether they will even bother. Between the drubbing they just absorbed in New York and the ones just ahead in Pennsylvania and Indiana and several other large states, such people have collectively curled into a ball, pillbug-style. They could decide to view this as a catastrophic setback for the Republican brand, one that demands an internal purge, an extended period of reformation and a stem-to-stern rebuild of the entire party. If they were paying me a bazillion dollars as a consultant, that’s what I’d tell them, with lots of bullet points and pie charts. There is some theoretical if counterintuitive possibility that the Republicans could emerge from this debacle as the stronger of the two parties in the medium term, because they had their crisis and hit bottom first.

Since the people who run political parties are stupid and self-absorbed and short-sighted (I believe those are prerequisites for the job), that’s highly unlikely. Kasich and Cruz and Karl Rove and the Koch brothers and the rest of the defanged vampires of Republican-land will almost certainly treat this whole thing as an aberration that couldn’t possibly happen again and will soon go away, and treat the fall election the way losing NBA teams sometimes treat the final games of the season: We’ll be in better shape for the future if we get creamed now! They haven’t written me that check with numerous zeroes yet, so that’s the course of action I recommend.