These defense patterns are so predictable: Shift blame, claim to embrace equality, lecture on "appropriate" causes 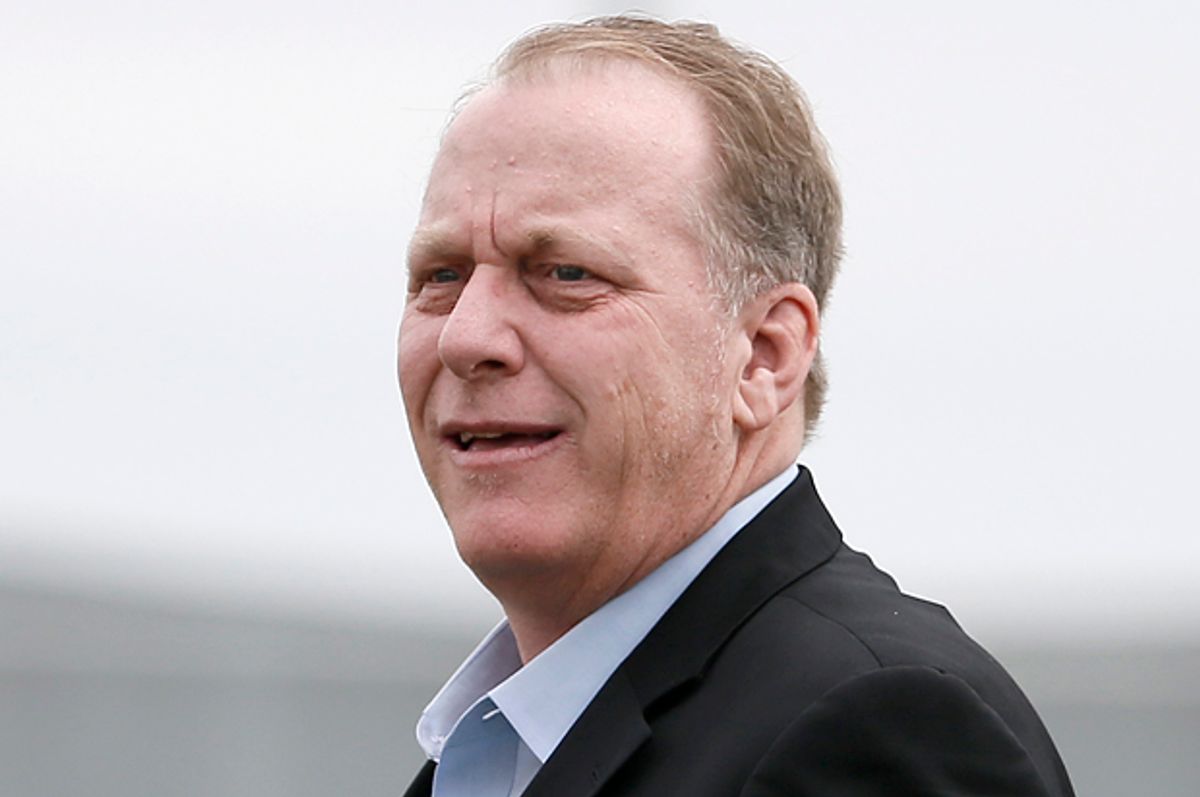 You know what never gets old? Middle-aged white guys telling the rest of us how we shouldn't be offended by their offensiveness. Curt Schilling, show us how it's done.

The 49 year-old former MLB pitcher and current ESPN baseball analyst Curt Schilling has in recent years been outspoken in his political and social views — including his generous acceptance of gay people if not marriage equality. Three years ago, he tweeted a story about a human rights atrocity in Pakistan and added, "And we gripe about gay marriage and health care." Because we apparently can't have equal rights and decent healthcare until we fix that.

On Monday, a meme he shared on Facebook emerged on social media — one featuring an unpolished-looking person in a blonde wig with the caption, "Let him in! to the restroom with your daughter or else you're a narrow minded , judgmental, unloving, racist bigot who needs to DIE!!!" Ooh, topical. Schilling, seemingly swept up in the insane bathroom panic of 2016, also added a personal message, saying, "A man is a man no matter what they call themselves. I don't care what they are, who they sleep with, men's room was designed for the penis, women's not so much. Now you need laws telling us differently? Pathetic." ESPN swiftly issued a statement that "We are taking this matter very seriously and are in the process of reviewing it."

Though screen grabs remain (Psssst… removing all traces of stuff off the Internet isn't as easy as it sounds!) Schilling deleted the post. He did not, however, issue a mea culpa for posting it in the first place. Instead, on Tuesday he sent out a tweet saying, "For all of you people dying to be offended by something that never actually happened," and a link to a post on his blog he titled, "The hunt to be offended…" Sounding more than a little offended himself, Schilling warned in his screed, "If you get offended by ANYTHING in this post, that’s your fault, all yours."

He first addressed a controversy he found himself embroiled in last year, when, once again meme-happy, he posted and then deleted a Hitler image captioned, "It's said only 5 - 10% of Muslims are extremists. In 1940, only 7% of Germans were Nazis. How'd that go?" He'd editorially added, "The math is staggering when you get to true #'s." That earned him a suspension from his Little League World Series duties. And at the time, he said that "Bad choices have bad consequences and this was a bad decision in every way on my part." A month later he was back to tweeting anti-Muslim sentiments.

And in his new blog post, Schilling defended his earlier actions, complaining, "All of you fraudulent media folks, you lazy ass 'don’t actually want to work for a story' clowns. The word you left out? the ONLY word that mattered? EXTREMIST…. I don’t dislike or hate Muslims, or people of the Islamic faith. Ask my friends that are both." He then went on to say that "This latest brew ha ha [sic] is beyond hilarious. I didn’t post that ugly looking picture. I made a comment about the basic functionality of mens and women's restrooms, period." Except that when you retweet or repost things, yes, you are posting them.

Anyway, Schilling then said that "I thank the Lord for the life I’ve been given. A life interspersed and occupied by men and women who are gay, by people of all races and religions, by men and women who dress as the other, by men and women who’ve changed to women and men…. I don’t care who, what, where or why you are who you are. I care about people and how they treat others." That's swell, except that trans people aren't people who "dress as the other" or "change to women and men." That's not how being trans works. There are resources you can access if you're confused about how it does. And if you care about how people treat each other, I wonder why then you're so comfortable in generalizations about Muslims and trans people? How do you think trans men and women are being treated when they are essentially cut off from access to public restrooms?

Schilling then ended with a refrain that's apparently familiar to him: "There are actual causes that need attention such as homeless veterans and our archaic education system." I don't know about you, but I just love it when Curt Schilling gives a lecture on what our social progress priorities should be. And Curt Schilling doesn't think trans rights are important because he literally doesn't understand what they are.