Charles Koch goes full Tyrion Lannister: His threat to back Hillary hints at the brothers’ devious game of thrones 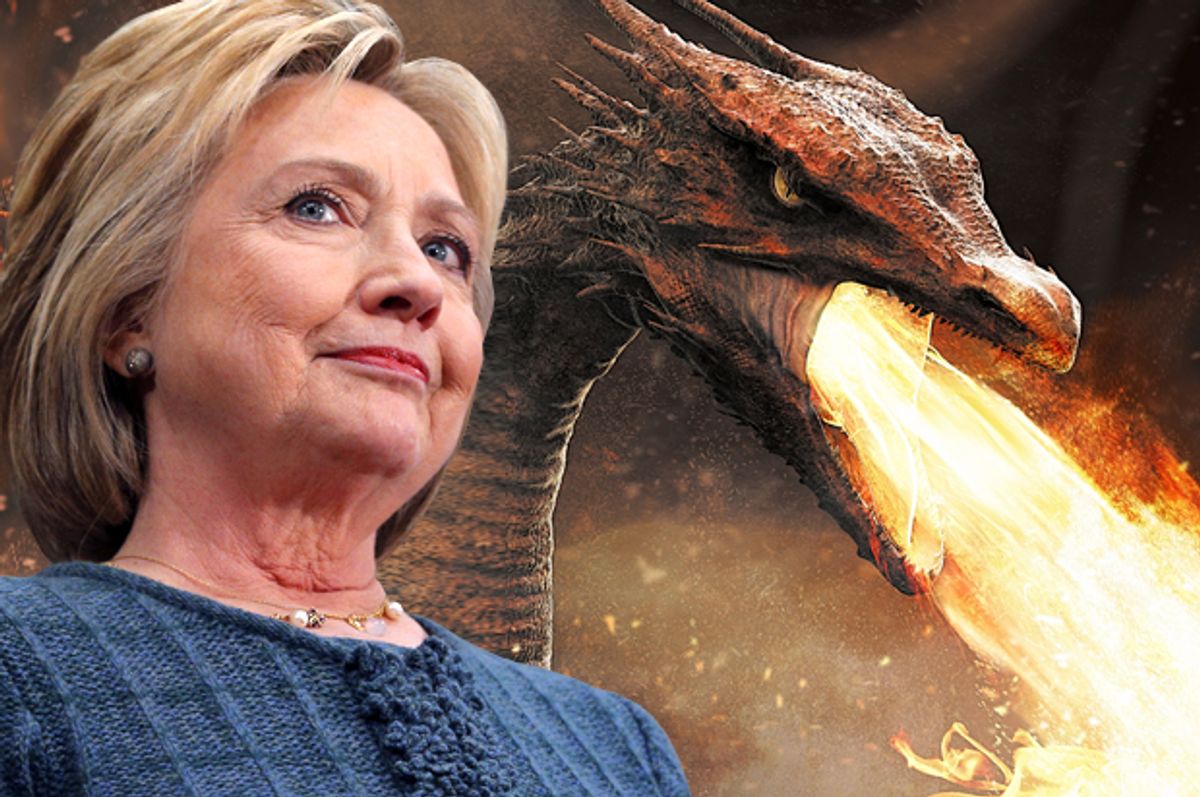 In a tactical maneuver worthy of Machiavelli — or perhaps of Tyrion Lannister, the manipulative dwarf-genius played by Peter Dinklage on “Game of Thrones” — billionaire businessman Charles Koch hinted this weekend that he and his brother are so unhappy with the current implosion of the Republican Party that they might support Hillary Clinton instead. When asked during an ABC News interview whether Clinton might be preferable as president to either Donald Trump or Ted Cruz, Koch said, “Let me put it that way: It’s possible.”

A million gleeful, puzzled or outraged social-media posts followed. Was the GOP’s best-known bankroller, half of the two-faced Sun King at the tippety-top of the 1 percent, merely being “facetious,” as a Guardian story put it? Was Chuck trolling his so-called friends and sworn enemies with an idle jest? Was it simply frustration talking? Was he, mirabile dictu, being sincere about preferring a more or less known quantity to the Pennywise-the-Clown horror-show of a Cruz or Trump presidency? I don’t know and it doesn’t much matter; one can only gape in admiration.

I’m completely serious. Even by Kochian mind-control standards, that was a mini-masterstroke, sowing terror and confusion in all directions. Who were the Koch brothers seeking to undermine with this seemingly bizarre pronouncement, and who were they trying to help? Was this meant to make the surviving Republican candidates come crawling back, or was it an ass-backward false-flag attack on Clinton, designed to boost Bernie Sanders’ fading campaign? Is this the beginning of a fateful alliance of former foes that will sweep its way to the throne, with the Kochs jointly playing Tyrion and Hillary Clinton as Daenerys Targaryen, the fearsome Mother of Dragons?

One can hypothesize, but it’s like medieval scholarly debates about the physical substance of angels or the omnipresence of God: Human language fails to capture the all-encompassing essence of the thing in question. One answer might be that the current state of reality displeases the Kochs, and they have set out (yet again) to reshape it to their desired coordinates. Another interpretation is that they were simply reminding us that they remain in power no matter who wins, and no matter what that person may have said to get elected.

One payoff arrived almost immediately, when Clinton felt compelled to issue a statement assuring us she had no intention of riding into town on a Koch-fueled dragon. She was, she tweeted, “not interested in endorsements from people who deny climate science and try to make it harder for people to vote.” I am not devoid of empathy for the Clinton campaign in this context, which was the veritable definition of a no-win situation. To begin with, spurning the support of any super-rich people can only be painful, and runs deeply counter to the Clinton Way of Knowledge.

Clinton had no choice, of course, but the cloudy strangeness of that tweet, a non-sentence with no clear subject or object, is the result of Kochian black magic at work. Some unspecified person does not want the endorsement of unspecified others, for these specific reasons. Are those the only reasons a candidate should reject the Kochs’ backing, or even the main ones? Does that imply that if the brothers took a more enlightened view of climate change and the Voting Rights Act, Clinton would be happy to make friends?

I don’t claim any of that will make a significant difference in the Democratic race, or that the campaign ads Bernie Sanders’ team is no doubt constructing from that material at this moment can sway many hearts and minds in Connecticut and Maryland and Pennsylvania and the other Northeastern states that vote on Tuesday. But that indirect and terrified Clinton tweet is like a million unforced errors in one; phrased more honestly, and perhaps more effectively, it would say, “Get thee behind me, Satan.” It should serve notice that even when it looks like the Kochs have lost their ability to control political outcomes, they still have the power to cloud men’s minds, like the mysterious hero of the old radio serial “The Shadow.” Women’s minds too!

When I say that the left has persistently underestimated the political agility and ideological commitment of the Koch brothers and continues to do so, I don’t mean activists or political opponents who have directly struggled with the range and depth of their strategy. But I think too many commentators and too much of the left-liberal public fall back on lazy stereotypes: A couple of greedy rich guys who aren’t all that bright and whose motives are transparent, seeking to safeguard their giant piles of money and reward their friends while corrupting the political process.

I believe that’s wrong on every level. The Kochs are intelligent men driven by complicated but entirely sincere ideological convictions that go far beyond self-interest. Their strategy is highly sophisticated and has multiple valences, and they genuinely believe that their Citizens United vision of a capital-dominated, quasi-libertarian pseudo-democracy is the best bet for ensuring American prosperity and social order over the long term. They are not racists or xenophobes, at least not in the Trump-Cruz pandering fashion. One can certainly argue that the economic policies they advocate have pernicious social effects that are amplified by racial disparities, but that’s a different question.

If anything, the Kochs have actively sought to decouple the Republican brand from the politics of whiteness, which they (correctly) perceive as toxic to the party’s long-term electoral health. The Charles Koch Institute, one of the brothers’ dozen or so nonprofits, has devoted significant resources to exploring criminal justice reform, and has worked with many individuals and institutions far outside the conservative comfort zone, including the ACLU, the MacArthur Foundation, Van Jones, and Black Lives Matter activist turned Baltimore mayoral candidate DeRay Mckesson. Similarly, the Kochs are not much interested in the GOP laundry list of troglodyte social issues, and have sought to steer the party away from such obsessions. David Koch spends much of the year in Manhattan and is perhaps the city’s most prominent balletomane; New York City Ballet’s home in Lincoln Center now bears his name. Do you suppose he has some major personal problem with gay people?

If the Kochs were really and truly driven by greed, they wouldn’t have bothered spending all that money in all those directions. They could do what most really rich people do, which is what Donald Trump did for years: Spread the money around in politics, and make sure you don’t miss the winners. They are driven by a desire for power, but not purely for its own sake (another difference from Trump). They want power because they believe they are uniquely enlightened and uniquely qualified to wield it, and it suits their cause just fine if you and I convince ourselves they’re nothing more than rich and obvious rubes.

All of which is to say that the Koch brothers are almost always more dangerous than they look, even in a state of apparent dejection and defeat. Do they have transcripts or tapes documenting whatever the hell Hillary Clinton said to all those Wall Street bankers? (I didn’t even think of that until just now.) One could apply much the same formula to Tyrion Lannister: Those in Westeros who have fallen afoul of his devious and far-reaching intelligence have learned to appreciate it (however briefly), but to much of the realm he remains a ridiculous little man driven by greed and envy. Whether this weekend’s Koch-Clinton dance of dragons is a premonition of scourging fires ahead I couldn’t tell you. But the Koch brothers, as usual, are several moves ahead of us in the game of thrones.