According to Glenn Greenwald, Brazilian oligarchs are trying to remove "from power a moderately left-wing gov't" 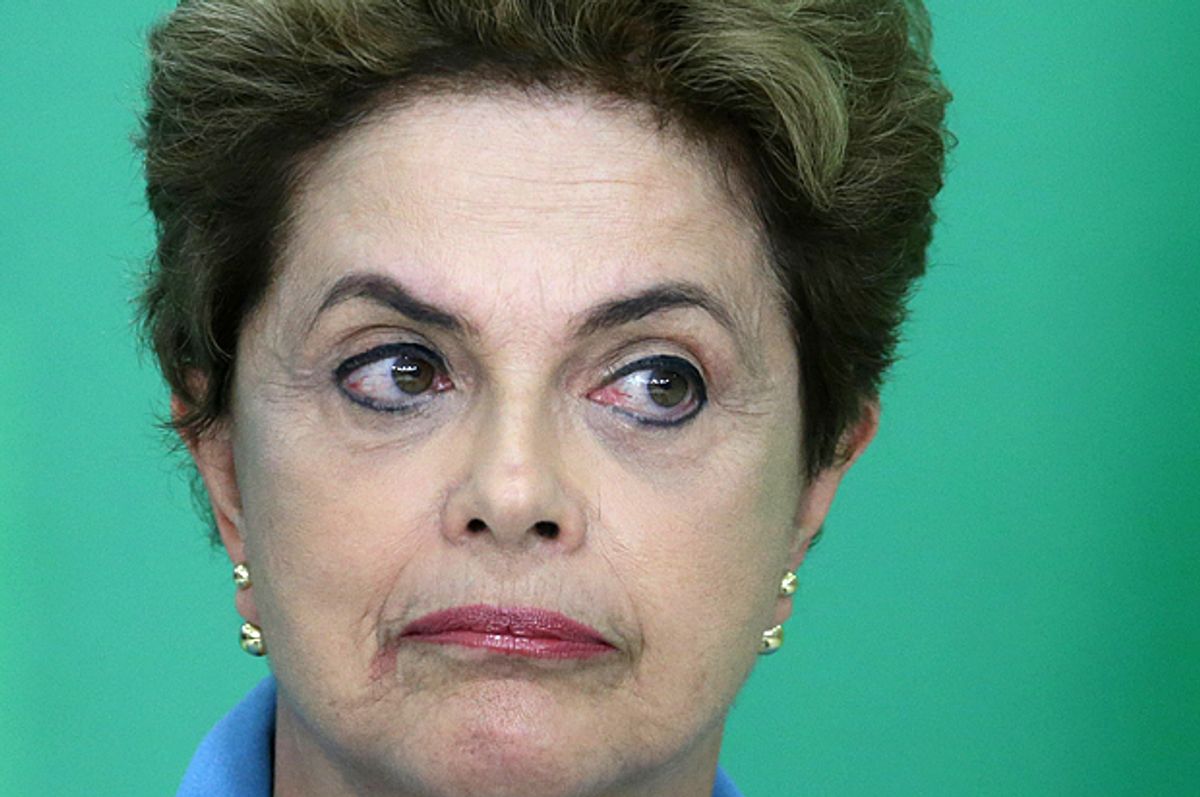 Analysts are warning that there is a slow-motion "coup" going on in Brazil, where the country's right-wing opposition is trying to impeach the democratically elected left-wing president with the support of corporate elites and likely even the U.S.

"Brazilian financial and media elites are pretending that corruption is the reason for removing the twice-elected president of the country as they conspire to install and empower the country’s most corrupted political figures," writes journalist Glenn Greenwald in a new report  on the scandal.

Brazilian oligarchs, he explains, are trying to remove "from power a moderately left-wing government that won four straight elections in the name of representing the country’s poor, and are literally handing control over the Brazilian economy (the world’s seventh largest) to Goldman Sachs and bank industry lobbyists."

Given the huge influence Brazil has in the world, as the fifth-largest country by population, there has been shockingly little attention in the U.S. to the ongoing crisis.

There has not been a lot of critical English-language reporting on the scandal, while Brazil's media outlets are overwhelmingly controlled by right-wing corporate elites pushing for the impeachment.

Greenwald, the Pulitzer Prize-winning journalist who worked with whistleblower Edward Snowden to expose massive NSA surveillance, has lived in Rio for several years, and his news outlet The Intercept has been one of the few English-language outlets that has reported on the events in Brazil closely.

Right-wing opposition figures have accused Rousseff of trumped-up charges, although she has not been accused of an actual financial crime, while many of them are simultaneously under investigation for much more serious charges.

On April 17, the lower house of Brazil's legislature voted 367 to 137 to start impeachment proceedings against Rousseff, citing allegations of manipulating budget accounts. In early May, the Senate will vote whether to put her on trial.

Rousseff and her supporters have blasted the proceedings as a "coup."

"Brazilian oligarchs and their media organs are trying to install" Vice President Michel Temer as the new head of state, Greenwald explains, referring to the politician as "corruption-tainted, deeply unpopular [and] oligarch-serving."

Were he to become president, Temer would likely implement austerity measures and install chair of Goldman Sachs in Brazil, Paulo Leme, as the head of the central bank.

The leader of the country's most powerful banking industry lobby, Murilo Portugal, a former International Monetary Fund official, would also probably be Brazil's next finance minister.

Numerous bank CEOS and other corporate executives have gloated that the impeachment would help bring them new "opportunities," Greenwald notes.

"It’s an obvious farce" and a "massive scam," he says, blasting "the truly anti-democratic nature of what’s taking place."

"This fraud being perpetrated here is as blatant as it is devastating. But it’s the same pattern that has been repeatedly seen around the world, particularly in Latin America, when a tiny elite wage a self-protective, self-serving war on the fundamentals of democracy."

The role of the U.S. in the scandal is contested but incredibly significant.

The Intercept exposed that a leading right-wing Brazilian opposition figure traveled to Washington, D.C. for secret meetings with American politicians and lobbyists.

Mark Weisbrot, co-director of the think thank the Center for Economic and Policy Research, explained in an interview on Democracy Now that Tom Shannon, whom the right-wing Brazilian lawmaker met with, "is the most influential person on Latin America in the State Department," the figure who recommends to Secretary of State Kerry what he should do.

"By meeting with him, [Shannon] sends a message to everybody who’s paying close attention in Brazil that the U.S. is okay with this process," Weisbrot said.

"It’s very similar to the coup in Honduras," he added, referring to the 2009 incident in which the Honduran military overthrew the democratically elected left-wing government and installed a series of right-wing leaders. The U.S., under the leadership of Secretary of State Hillary Clinton, prevented former President Manuel Zelaya from being reinstated and pushed for the world to recognize the coup government.

Since then, the U.S.-backed Honduran regime has viciously cracked down on opposition figures, killing hundreds of people. It has presided over a more a more violent and chaotic country that, from 2012 to 2014, was the murder capital of the world.

"Anybody paying close attention to that and everybody in Washington knew the very first day of the [Honduran] coup, when the White House put out a statement that didn’t say one bad thing about the coup, well, that’s the strongest statement you could make in support of a coup, a military coup, in the 21st century."

There are no real charges against President Rousseff that would warrant impeachment, he pointed out, referring to the crisis as a "coup" attempt to undo the 2014 election.

Weisbrot stressed: "The United States really does want to get rid of the Workers’ Party and always has."

In short, Brazilian elites are trying to topple the democratically elected left-wing president on trumped-up corruption accusations and replace her with an oligarch-backed right-winger who has been accused of actual, serious corruption. And the U.S. is silent, if not helping the undemocratic opposition outright.