The best reason for Bernie Sanders to fight on: Hawkish, neoliberal Clintons need a watchful eye from progressives

Yes, Sanders needs to play it smart from here. But let's not forget that we need a check on Hillary's deep failings 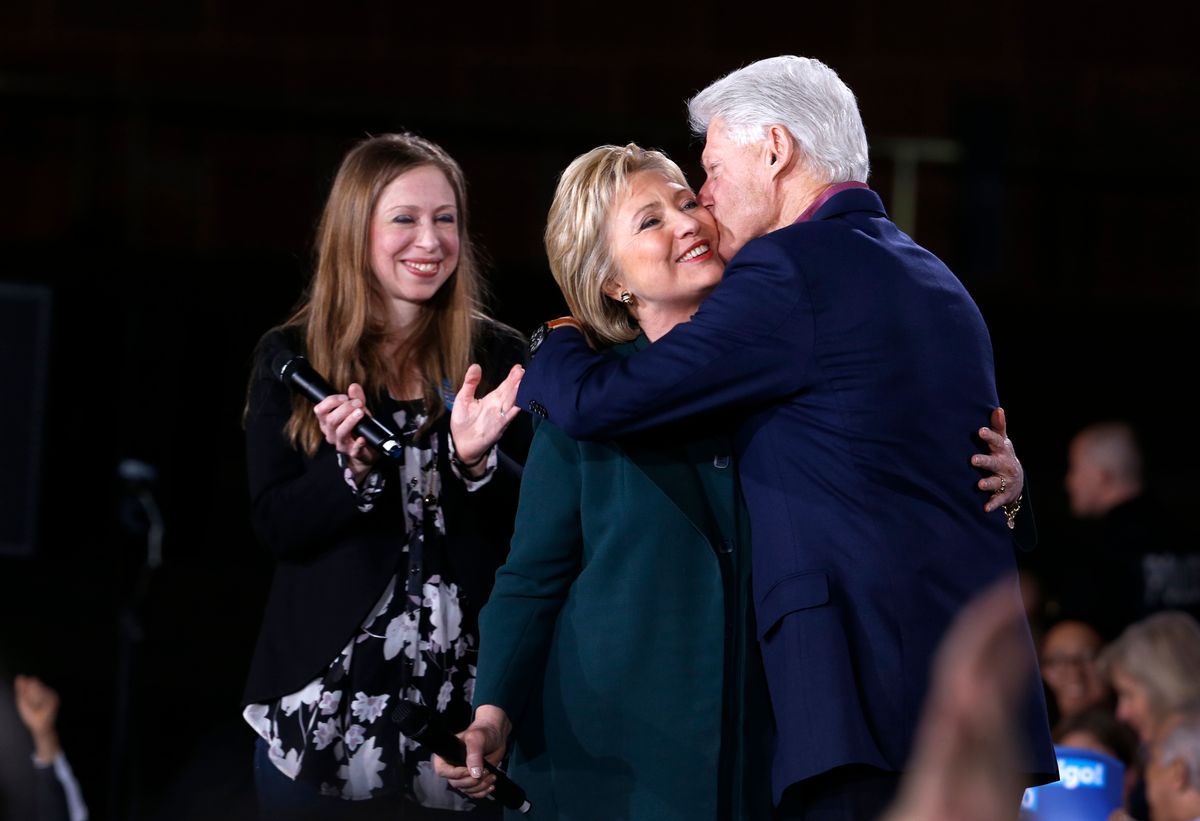 Democratic Presidential candidate Hillary Clinton gets a kiss from her husband and former President Bill Clinton as daughter Chelsea looks on during a rally at the Clark County Government Center Friday, Feb. 19, 2016. (Steve Marcus/Las Vegas Sun VIA AP) (AP)
--

If Bernie Sanders loses most of today’s primaries in Pennsylvania, Maryland, Connecticut, Delaware and Rhode Island, the wise and the mighty of the Democratic Party and the press will call more loudly than they already have for him to stand down as a candidate and to focus his and his supporters' energies instead on helping Hillary Clinton to discredit Donald Trump or any Republican opponent.

Their logic seems compelling, so let me mention and rebut a few of its most convincing points before mentioning the..., ah, elephant in the argument that could embarrass Democrats and actually worsen conditions in the United States even if Clinton wins the White House and the Senate.

The first argument for Bernie to pack it in as a candidate and go all out for Hillary is that we can't afford to underestimate the dangers of Trump's slippery demagoguery and many voters' susceptibility to it. To defeat him or any other Republican nominee, Clinton will have to move rightward, not leftward, as she had to do to head off Bernie in the primaries.

This argument doesn't reckon clearly enough with the reality that Democrats would be uniting behind a corporatist, neoliberal grand strategy that Clinton has always supported but whose successes and credibility are nearly exhausted but that she has shown neither the inclination or capacity to change. Breaking glass ceilings and curbing racist and xenophobic policies are absolutely necessary preconditions for American renewal, but they're also absolutely insufficient. Curbing the national-security mania, the militarist juggernaut, and predatory marketing and lending that have trapped us like flies in a spider's web of 800-numbered, sticky-fingered pick-pocketing machines would require out-strategizing powerful enemies in ways that nothing in Clinton's record proves she can or will do.

The second reason given to Sanders enthusiasts for folding themselves into the Clinton campaign rests on some cautionary history lessons: In 1968, Richard Nixon narrowly defeated Hubert Humphrey, a capable and committed liberal Democrat, because anti-war leftists refused to vote for a man, who, as Lyndon Johnson’s Vice President, hadn’t opposed the war. In 2000, Ralph Nader "purists" handed Florida and, with it, the presidency, to George W. Bush, who wreaked havoc upon a republic that Al Gore might have preserved. Now, Bernie’s supporters are cautioned to imagine a Supreme Court with one or even two more Republican nominees, not to mention the havoc that either Trump or more Republican "voodoo economics" would wreak.

The third “Bye, Bye, Bernie” argument comes, ironically, from penitent veterans of the old and new lefts of the 1930s and '60s who experience Bernie as a re-tread and embarrassing reminder of youthful anti-capitalist, anti-institutional ranting that they outgrew long ago. The irony here is that his support comes not only from people in the heartland as well as on the coasts who are untainted by the left's blunders and cautionary lessons but also from lots of older people who may have resented the excesses of The Movement but are a lot more horrified by what Clintonite/Reaganite triangulation has wrought in the society they see decaying around them. (An even bigger irony for Jewish leftists and neoconservatives alike is that all that glowing enthusiasm on the faces of Bernie's overwhelmingly non-Jewish enthusiasts at his is an unexpected relief --  "Good For The Jews" -- after the long, sorry parade of Robert Rubins, Lloyd Blankfeins, Sheldon Adelsons, Paul Wolfowitzes, Richard Perles, Elliott Abramses, William Kristols, Joe Liebermans, and all the rest.)

But the elephant in the room is Hillary Clinton herself, super-credentialed, super-experienced, and super-competent though she is. Next to her, we've been told, Sanders simply recites old leftist jeremiads without really knowing what he's talking about. But the big truth never mentioned by Clinton's supporters is that voting for Sanders has until now been the only way to help Clinton and other establishment Democrats know what they're talking about. Her 2008 campaign insisted that Barack Obama didn’t know what he was talking about and wouldn’t know what to do with a national-security phone call at 3 a.m. Clinton, of course, didn’t know what she was talking about when she voted for the Iraq War, but she learned enough as Obama’s secretary of state so that, in the last debate, in Brooklyn, she praised his sagacity and good judgment.

This isn't the first time that the supposedly simple and narrow have enlightened the supposedly worldly and wise. If anything, it’s a recurring irony in American politics: From Herbert Hoover to Alan Greenspan, from Woodrow Wilson and his negotiators at Versailles in 1919 to the architects and apologists of our wars in Viet Nam and Iraq, those supposedly most qualified and most “in the know” didn’t know what they were talking about. So pardon me if Clinton's long record as a Washington insider makes me doubt that she can "take on the big money” — as Sanders put it during the Brooklyn debate, citing his “small money” campaign, whose 7 million donations have averaged $27 each and has left him indebted to no powerful interests. Pardon me if I suspect that, after a decade as a hands-on municipal manager who got things done and 26 years in Congress, as an Independent who won many colleagues’ respect without becoming a Washington “insider,” Sanders knows what he’s talking about more than Obama did in 2008.

So, what should he do now? The best answers I've seen come from Jedediah Purdy's essay, "A World to Make: Eleven Theses for the Bernie Sanders Generation," in Dissent magazine. He explains why the economy is about power, not "free markets," why expertise is not legitimacy, why citizens have to be more than just consumers and human capital, why providing economic security is anything but debilitating and dependency-inducing, and more. Clintonites pay lip service to some of what Purdy summarizes, but they haven't put it into practice. Purdy's most important reminder is that neither they nor corporate neoliberalism will do better by more Americans without a fight from the kind of movement that Sanders, unlike Barack Obama, and certainly unlike the Clintons, has really seeded and that he and his supporters can now demonstrate that they truly want to sustain.