Has American pro soccer finally arrived? In this strange saga, the answer is "almost"

The building of New York's insta-team is the latest twist in the long, strange tale of Major League Soccer 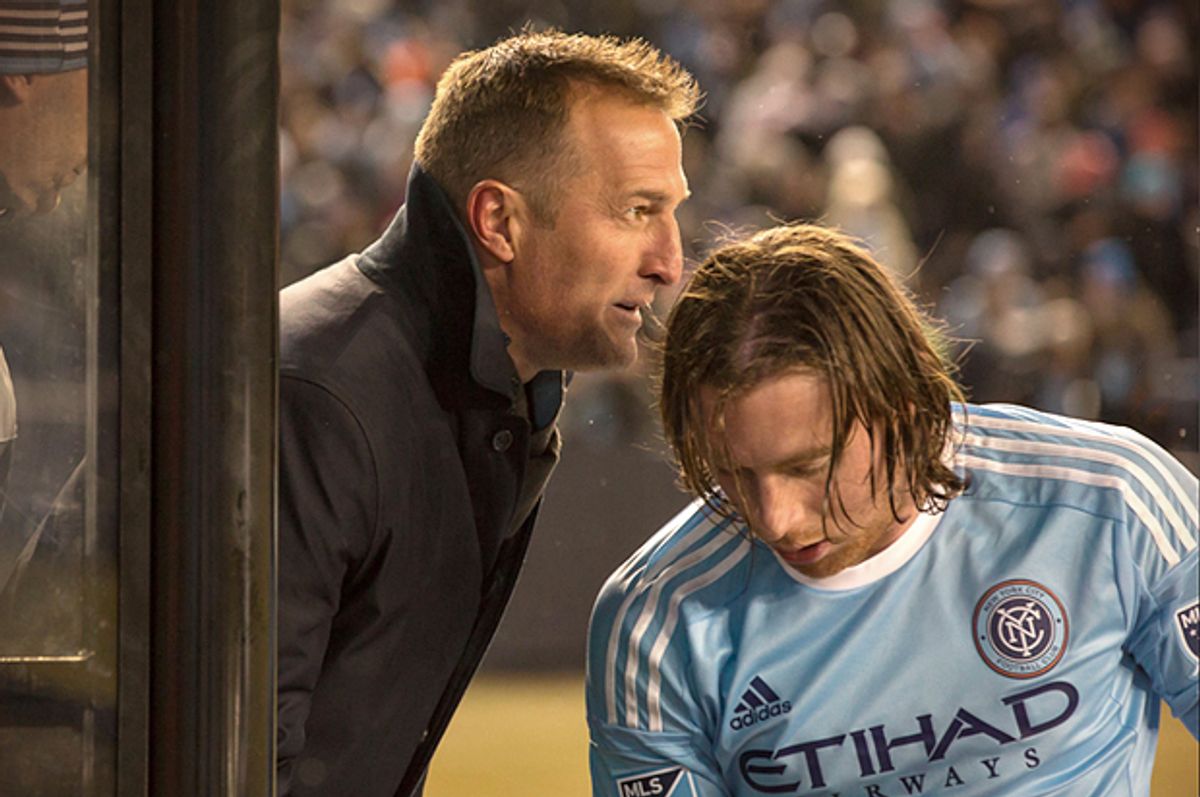 One of the many perverse and peculiar aspects of Major League Soccer, North America’s not-quite-top-flight professional league, is that for almost 20 years it had no team in New York City. There are boring practical reasons why that happened, largely having to do with money and real estate. But it's bizarre, right? Not merely is New York the continent’s largest city and its media and financial capital, it’s a city rich with immigrants from all parts of the globe (and the children and grandchildren of immigrants), where in virtually every park on virtually every Sunday you can find a pickup soccer match or three. In terms of public participation throughout the five boroughs, soccer is probably about even with basketball, and way ahead of all other team sports. As for fandom, if I go outside and walk down the street right now, I’ll encounter someone in a Barcelona or Manchester United jersey within four or five blocks.

Now the Big Apple has its own MLS franchise at last: New York City FC, launched last season with tremendous hoopla. As Claudio Reyna, the American soccer legend who is now the team’s director of “football operations” (or general manager) puts it, NYCFC had to be “built from scratch” in a short time, and might well represent “the last-ever professional sporting franchise launched in New York City,” at least on this scale and under this much scrutiny. As captured by journalist turned filmmaker Justin Webster in the intriguing vérité-style documentary “Win!,” which recently premiered at the Tribeca Film Festival, the results of this grand marketing venture have been strange and turbulent and partly, but not entirely, successful. All of which makes a pretty good analogy for the precarious situation of pro soccer in American sports and American culture.

Launched as a partnership between the English team Manchester City and the New York Yankees, NYCFC signed several big-name European players — most notably superstar Spanish goal-scorer David Villa — along with some decent young American talent. The new team has drawn big crowds and plenty of media attention during its first season-plus in Yankee Stadium, along with the sort of content-free celebrity buzz that only New York or L.A. can enable. At a recent match I attended, a listless 0-0 draw with Chicago on a freezing spring night, Trevor Noah and the cast of “Hamilton” showed up. Anthony Ramos, who plays Alexander Hamilton’s son Philip in the Broadway show, gave a performance of the national anthem that was more exciting than the actual game. (No one is happy about that awkward stadium-sharing arrangement; baseball and soccer make poor bedfellows, layout-wise. Given the aforementioned practical issues, it will be years before NYCFC can build its own facility.)

Fans of the franchise now known as the New York Red Bulls may bristle at everything I’ve said so far, but they know it’s true. Born in 1996 as the New York/New Jersey MetroStars — one of the clunkier monickers of MLS’ early bad-names period — the Red Bulls have always played across the river in suburban New Jersey, which from the Manhattan-chauvinist point of view might as well be Nebraska, or the Moon. They spent their first 14 seasons entertaining depressingly small crowds in the old Giants Stadium, a cavernous 1970s monstrosity inaccessible by public transit. For years the MetroBulls seemed like a team specifically designed to fail, a description that also applied to the league around them. You could make a movie or a miniseries or an opera about the Red Bulls’ epic struggle, except that no one would be interested.

OK, that’s kind of mean: Despite an awful start to the 2016 season, the Red Bulls have become an exciting, high-energy team over the past several seasons. They have their own attractive stadium these days, even if it’s in the barren industrial town of Harrison, New Jersey, just south of downtown Newark. But if the Red Bulls and their plucky fanbase felt neglected and abused by the urbanite soccer snobs before 2015, it’s many times worse now. They’ve been dramatically upstaged by a chaotic and disorganized team that draws twice as many fans and hardly ever wins, but whose uniforms at least do not carry free advertising for a foul-tasting energy drink beloved by fraternity brothers.

Yeah: When it came to results on the field, it’s safe to say that NYCFC’s debut season didn’t go that well. In a sense, that’s a testament to the fact that the quality of play in MLS is not as bad as some snobs and skeptics maintain. It did not turn out to be possible to parachute in with a bunch of money and imported stars and win the championship. As documented in “Win!” NYCFC won only 10 matches in a 34-game season, suffered an 11-game winless streak that lasted from mid-March through early June, and failed to make the playoffs even in MLS’ generous tournament-style system. One of the expensive imports, English star Frank Lampard, arrived months late and never seemed to fit in. The team’s much-lauded young American coach, Jason Kreis, was dumped and replaced with former French star Patrick Vieira, who has not visibly improved matters. (After eight matches in 2016, the team has won only once.)

After the premiere of “Win!” I caught up with Reyna, a longtime star for the U.S. men’s national team and various European clubs, including five seasons with Manchester City, NYCFC’s parent club. He tried to convince me that the film’s title is not ironic. “We didn’t win enough on the field,” he said, “but I personally knew that would be difficult to accomplish in Year One. You always want to give a positive tone and message, you don’t want to say, ‘We might not win that much. We might not make the playoffs.’ But as the league has grown, we’ve seen how much more difficult it is for an expansion team to get up and going.”

In marketing terms, Reyna says his losing team has been a big win. “We exceeded our expectations, to be honest. Going into this, I definitely had some concerns. I had doubts about how big we could be and how relevant we could be. I had no idea whether the city would take to us, whether the media would pay attention to us. I felt some concern that we would not be the success that we turned out to be.”

In effect, Reyna said later, he didn’t have the option of growing a good team slowly and organically, as the management of FC Dallas has done with a roster of homegrown Texas players and young Latin American recruits. As the film demonstrates, in the context of New York it was more important to create a spectacle than field a winning team. So NYCFC was built around name-brand star players like Villa and Lampard and Italian midfielder Andrea Pirlo, and undeniably played exciting, attacking soccer — but was atrocious on defense. (The team scored 49 goals, sixth-best in the league, while surrendering a league-high 58.)

If the strange tale of NYCFC’s semi-successful launch is not quite like anything else in American sports history, one could say the same about American soccer as a spectacle and a business. After a dark stretch in the 2000s when MLS seemed in imminent danger of collapse, the league has not just survived but prospered. No one claims it will rival the English Premier League or the Bundesliga anytime soon, and it doesn’t look like the “soccer will be huge in America” paradise long prophesied by true believers. But we’re closer to that than many skeptics and haters thought possible, and the generations of older sports fans who viewed soccer as an alien or girly invader are fading away.

Mercifully, MLS’ various attempts to “Americanize” soccer have been abandoned: There’s no more football-style “countdown clock,” and no more hockey-style shootouts to settle draws. So have the early team names seemingly devised by a committee of ad executives and eight-year-olds. Gone forever are the San Jose Clash, the Dallas Burn and the Kansas City Wiz, with their unforgettable urine-yellow uniforms and Charlie Brown zig-zag stripes. Let’s not talk about Real Salt Lake, the most baffling and stupidest of second-wave attempts to ape the names of famous European teams.

There has been intense branding churn while MLS tried to figure out what it was selling and who its audience was: Europhile soccer snobs? Latino immigrants? Youth soccer teams? Only five of the league’s original 10 teams have remained in the same cities under the same names. One franchise, currently known as the Houston Dynamo, has had four different names in two different cities. But as the NYCFC saga demonstrates, as America changes, American pro soccer has developed considerable stickiness, and isn’t going away. I’m still more likely to see a Chelsea or Real Madrid shirt when I go outside in Brooklyn today than an NYCFC jersey. But that ratio is slowly but steadily shifting, and more to the point, the person wearing the sky blue and dark blue crest of New York’s insta-team will not look hopelessly uncool.