Trump like Bernie? Don't be fooled by lazy comparisons — Sanders stands for all that Trump hates

Trump and Bernie are polar opposites in mindsets, values and proposals 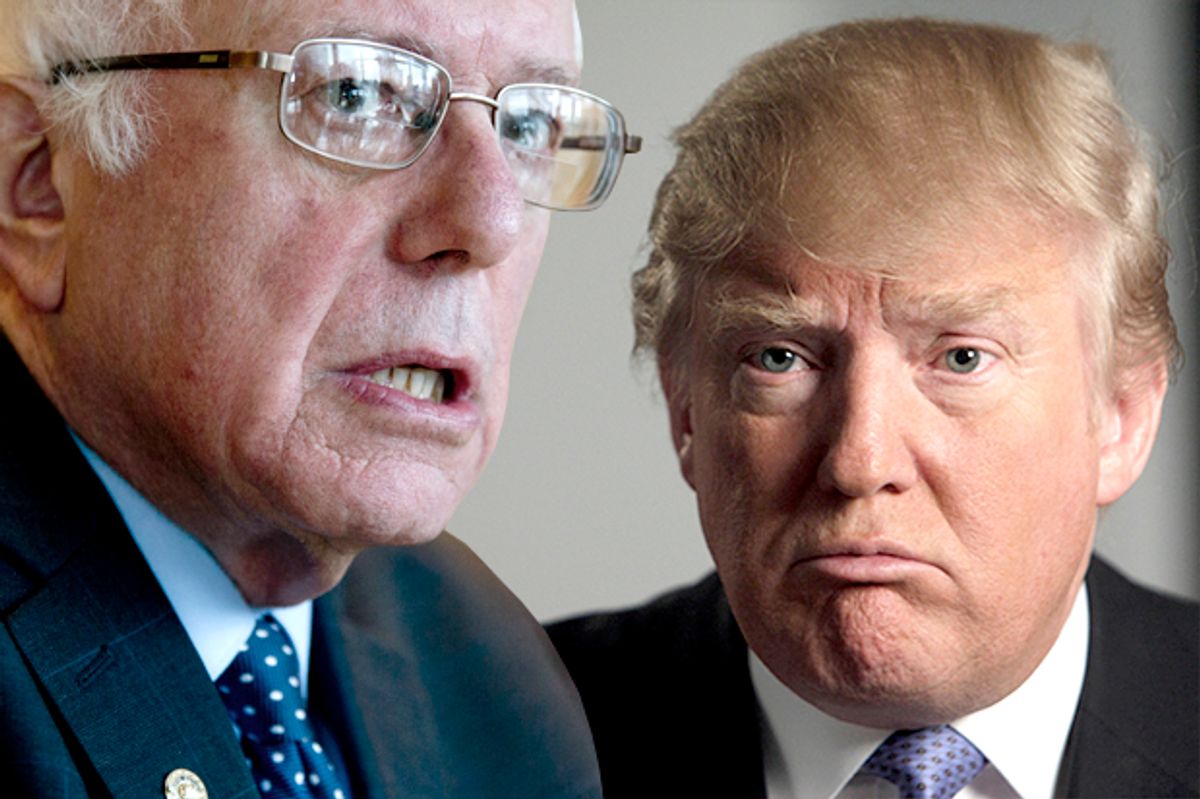 Early on, facile, pro-Donald pundits eagerly linked the Trump and Sanders candidacies. Leftists rushed in, mesmerized by any conspicuous insurgency against entrenchment. This fable is so rife with distortion it’s amazing there aren’t weekly corrective eruptions. What core agendas overlap? Quite the opposite, as tone, values and policy disparities swamp superficial linkages. Obscured by staggering, mind-bending campaign lying, defamation, and chicanery, high time to confront a lightweight linkage capable of damaging Sanders' historic movement importance.

One decisive, incontestable difference: Trump's nomination per current polling demolishes the nation's most dominant party, jeopardizing its White House and Senate chances, even vaunted House majority, inevitably with negative ripples down the line. If Trump fulfills this doom and gloom scenario, that welcome implosion brings down the regressive House of Reagan. Sanders as nominee not only doesn't fracture the Democratic Party but revitalizes a broken, cowardly party with new and young, sustainable, grassroots support. What else truly matters over time?

Mystified by Trump's opening surge, talking heads sought out patterns: one on the left, one on the right got cobbled together because they appear to indict the status quo (as if a self-evident category). Don't both confront "establishment" hegemony and voice small-fry “populism,” plus condemn bad trade agreements, job losses, and Washington insiders? Both appear to question military fiascoes (though with opposing solutions). Sanders certainly threatens national and party power centers; Trump, aggressive rhetoric aside, is a wrecking ball mainly against the GOP, no change-agent who reforms how the world or Main St. work. How many billionaires and insiders fear Trump's wealth addiction or boasted stardom across the rich and famous landscape?

That's why hordes of rock-ribbed Republicans can't stand Trump (doomsday electoral dread aside) because he's no true conservative, amplified by his arrogant, rich-kid style and take-no-prisoners belligerence. How many Democratic stalwarts denounce Sanders' idealistic politics (however hard to pull off) or declare him unqualified? Few to none.

The clear record exposes profound opposition, especially what matters most: the mindsets that would orchestrate presidential administrations. No surprise, considering how their backgrounds, experience and philosophies radically differ, let alone that one offers workable solutions and Trump dishes out unending contempt, condescension and sound bite verbiage. Can anyone imagine Sanders echoing Trump last weekend, "If I acted presidential, I guarantee you I wouldn't be here"?

Don't worry about Democrats or Congress or the courts, Trump declares: all will cower before his personal magnetism and negotiating genius, delivering riches beyond the dreams of avarice. A virtual Trump coup d'etat thanks to his magic Midas touch — or more darkly, a velvet glove over a merciless iron fist, with the Trump Oligarchy Parade in full charge. Delete Trump wars on immigrants, women, and Muslims, and what remains is this merciless, bottom-line, right-wing meme, the "business of America is business."

Sanders could not be more different: an unassuming, leftwing movement-maker who targets corrupt big business as the enemy, proposing government as the only real and moral offset. Sanders redeems a compassionate progressivism that views unfair taxation and corporate welfare as enriching the 1% at everyone else's expense (literally). Clearly, Sanders' style and mission are opposite to Trump's hypnotic reality TV moves — to inform and awaken the collective 99% to how their self-interest is battered by greedy bankers plus 50 CEOs running the most injurious oil, mining, chemical and industrial powerhouses.

While Sanders defies the oppressive status quo, he strictly refuses to fabricate any sort of addled cult of personality. Opposite to Trump's bizarre magic thinking, guaranteeing job payoffs, Sanders argues systemic reform is a hard, long, collective quest. Presidents rarely create jobs directly. Trump obscures the "status quo" he claims to detest, using it as scapegoated symbol for his fear-mongering gloom and doom. Sander claims no messianic powers; Trump offers himself as the no-cost savior only a truly stupid country would dare reject.

Does Trump indict inequality or the god-given privilege of fat cats to accumulate as much treasure as possible? Does Trump ever question the fraudulent "free market" that concentrates wealth by taking it from the middle and working classes? Does Trump indict state subsidies in housing (which enriched him) or for oil and mining firms? In fact, in his foreign policy sermon this week, he links our national security firmly with growing the world's most damaging business, "defense spending," funding not just for torture but arms, proxy warfare and global militarism.

A dubious iconoclast, Trump inconsistently ridicules Obama's foreign policy as both too much or too little, declaring failed wars haven't kept suspicious Muslims, let alone terrorists, in their proper place. Aside from threats of massive banishment or reckless violence, Trump has no identifiable anti-terrorism program -- beyond "elect me." World safety then defaults to the world's “best negotiator,” though violent religious fanatics brazenly scoff at compromise with the western devil. For Trump, the Iranian nuclear deal fails for not being punitive, heavy-handed or imperialistic enough, bellowing like any tin-pot, saber-rattling monarch disciplining his serfs.

Trump is no maverick here, echoing decades of brutal neocon thinking, in the tradition of von Clausewitz: war is simply the continuation of (imperial, exceptionalist) policy by other means. To enemies of American greatness, real or perceived, all bets are off. In Trump's jungle model, we descend again to Bush’s “us vs. them,” the world reduced to rich and powerful winners vs. whining, unstable losers. Track this business logic: why spend billions on nukes if we never use them?

Overall, Sanders looks to temperate "socialism," which Trumpery mocks and slanders as old-style communism. That goes along with the Donald glorifying oligarchs, worshiping inequality plus suckering the disadvantaged, fear-based crowd. Instead, Sanders’ core vision appeals to the better angels on the left and center. All "populist" linkages disappear when Sanders' very distinct programs embrace the vast majority, sponsoring greater opportunity, education and advancement.  The master illusionist, Trump’s oligarch-friendly policy voids obscure the real, Main St. unemployment grievances on which his outsourcing cronies feast.

Indeed, Sanders stands for all that Trump hates. Trump is the poster child, the proudly ignorant tycoon, that drives the Sanders movement. Time to banish this surprisingly enduring distortion: Sanders is not like Trump or vice versa: despite surface parallels, they are at heart more like polar opposites. In the end this measure emerges: the unassuming Sanders presents people-oriented messages that widen debate and insight. Trump's proto-fascist, wealth-driven demagoguery kills debate with deceptive, irresponsible war cries that deter thinking and enlightenment.