"Your hair is so white, it tried to punch me at a Trump rally": 10 best lines from Larry Wilmore’s scathing White House Correspondents’ Dinner monologue 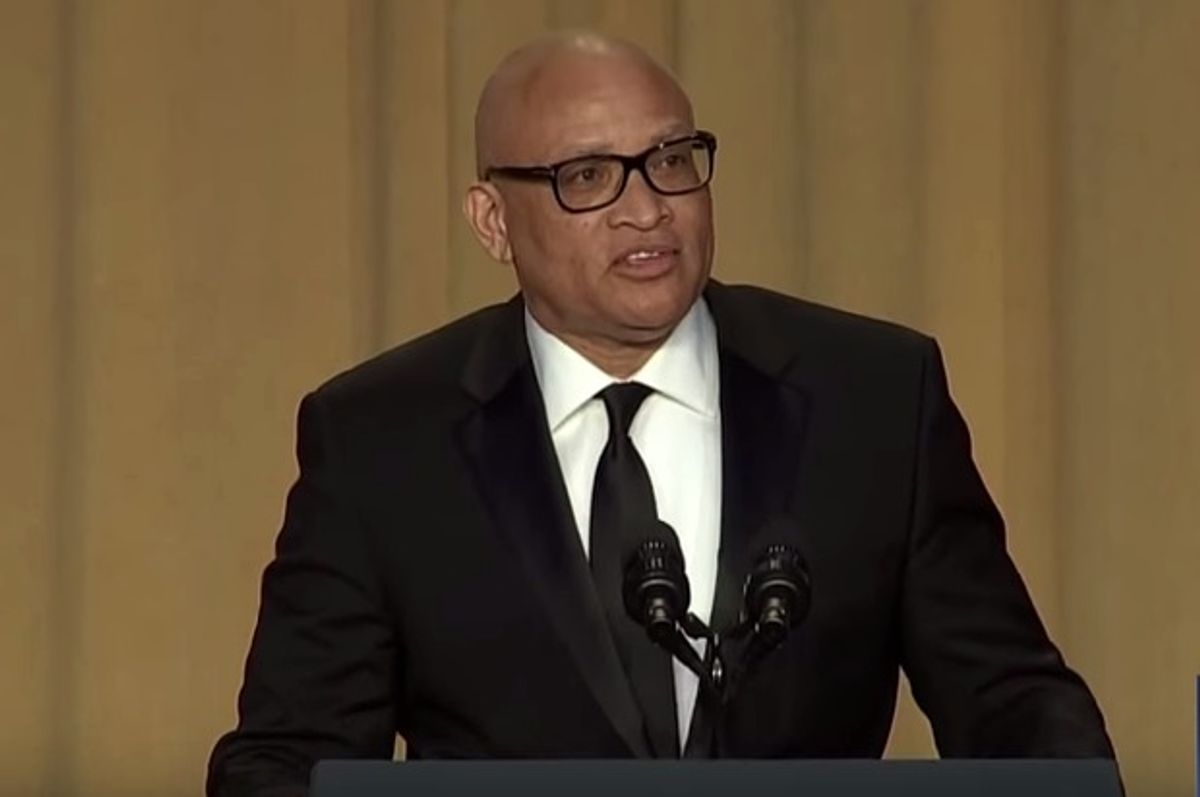 Last night, “The Nightly Show” host Larry Wilmore delivered the traditional roast/monologue at the White House Correspondents’ Dinner, also known as Nerd Prom, because I guess Wolf Blitzer and Kerry Washington are “nerds,” just like every supermodel who likes “Star Wars” is, too. President Barack Obama dropped some amazing lines, as was expected — among other things we’ll miss in 2017 is having a president with killer joke timing — before literally dropping the mic on his way out.

You can read Wilmore’s epic transcript of shade here, but here are the 10 best lines, including what he said to Don Lemon to make the CNN anchor give him the finger.

“Well, welcome to ‘Negro Night’ here at the Washington Hilton, or as Fox News will report, ‘Two thugs disrupt elegant dinner in D.C.’”

Later he trashed them for pushing the inane “Beyconé hates cops” narrative after her Super Bowl performance, and now the Beyhive might be coming for Megyn Kelly.

“I think Fox News secretly likes Beyoncé, though. They just renamed ‘The Kelly File,’ ‘Becky with the good hair.’”

“I am a black man who replaced a white man who pretended to be a TV newscaster. So, yeah, in that way Lester Holt and I have a lot in common.”

3. CNN did not get off lightly last night, either.

“Speaking of drones, how is Wolf Blitzer still on television? Ask a follow-up question. Hey, Wolf, I’m ready to project tonight’s winner: Anyone that isn’t watching ‘The Situation Room.’”

“You know, I should say some of America’s finest black journalists are here tonight. Don Lemon’s here, too. Hey, Don, how’s it going? Alleged journalist Don Lemon, everybody.”

Watch this on a loop, it’s mesmerizing (they made up at the after-party, apparently — Don Lemon is nothing if not in possession of a finely-tuned sense of humor about himself)

4. In Wilmore’s hands, even a de rigueur gag about how the president has aged over 8 years turns into a multi-layered joke about race.

5. Speaking of “all lives matter,” Wilmore will not let the room forget he is a black man roasting them in honor of a black man ending two terms as president and it is nothing short of amazing.

6. Melissa Harris-Perry’s reaction to this bit about MSNBC and race is everything:

“MSNBC — MSNBC here tonight? No? Which actually now stands for ‘Missing a Significant Number of Black Correspondents.’ Am I wrong? They like fired Melissa Harris-Perry, they canceled Joy Reid, they booted Touré. I heard they put Chris Hayes on probation because they thought he was related to Isaac Hayes. That’s wrong. MSNBC got rid of so many black people I thought Boko Haram was running that network.”

7. Here’s a two-fer on Bernie Sanders and Hillary Clinton:

“I am confused with Bernie’s stance on guns. He seems to be anti-gun everywhere except Vermont. Bernie doesn’t care who gets a gun in Vermont. (*whispers*) There are no black people in Vermont.

“I have to give you credit though, Bernie, you are trying hard to get the black vote. I think it’s great. Bernie’s been hanging around with rapper Killer Mike. Or as Hillary Clinton calls him, Super Predator Mike.”

8. And of course, the orange elephant in the room, reminding everyone in attendance that next year they might have to endure a “good-natured” Donald Trump roast:

“I am not surprised Donald Trump is happening to America because I watch movies, I do. And every time there’s a black president, something always comes to destroy the earth.”

“I just got a note from the president saying that if you want another drink, you should order it now because the bar will be closing down. Of course, he said the same thing about Guantanamo, so you have at least another eight years.”

10. But it’s his last line that everyone’s talking about:

“When I was a kid, I lived in a country where people couldn’t accept a black quarterback. Now think about that. A black man was thought by his mere color not good enough to lead a football team — and now, to live in your time, Mr. President, when a black man can lead the entire free world. Words alone do me no justice."

Watch the entire set, and then go read Damon Young on why that moment was “peak white tears.”