Behind the scenes on "Star Wars": The strange but mostly true stories of "Elstree 1976"

Darth Vader's long and tragic afterlife, and other unlikely tales from a legendary low-budget film shoot 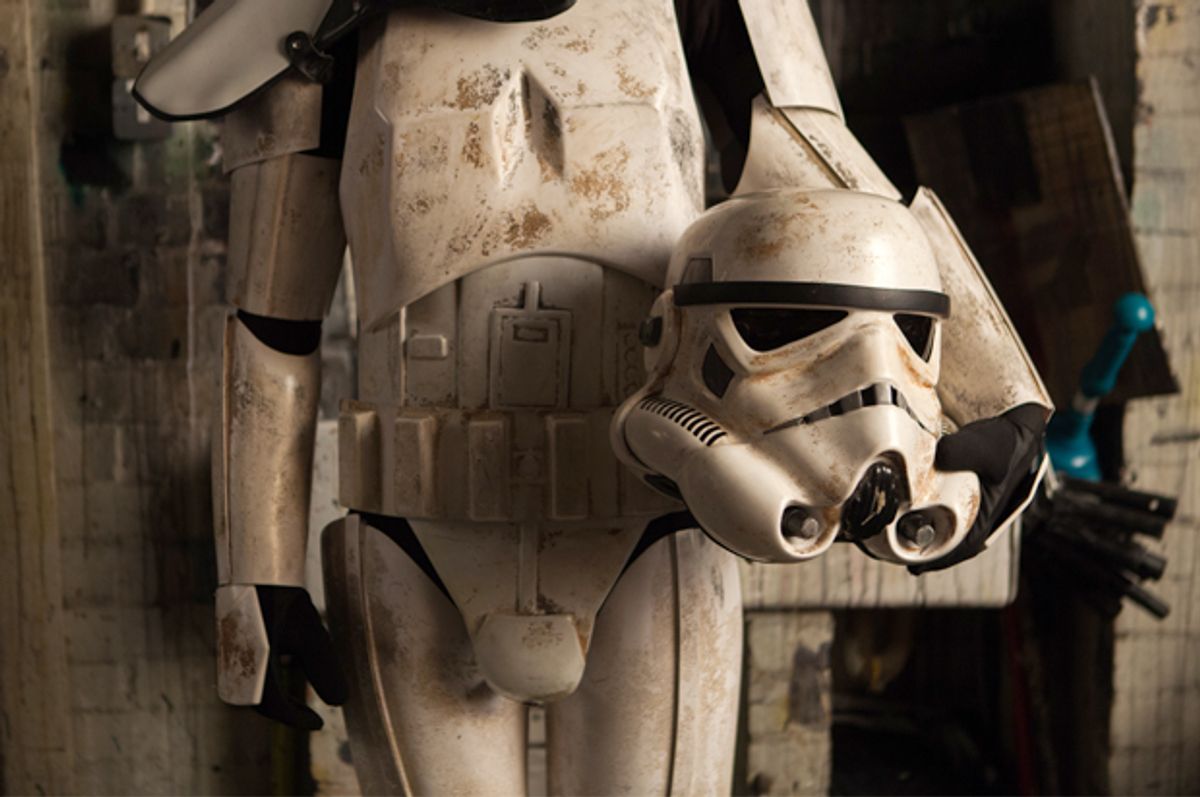 English actor David Prowse’s greatest role, in his own estimation, was playing Green Cross Code Man, the inspirational figure in a series of instructional road-safety videos made for British children. (If he’d been American, he’d probably have been called Crosswalk Man.) Prowse is admittedly slightly more famous for another performance, one that has made him lots of money over the years but left him strangely embittered. Yes, I see you in the back of the class, and I know you know the answer: Prowse played Darth Vader in the original 1976 “Star Wars” and its two sequels, although his dialogue was overdubbed in post-production by James Earl Jones. (To this day, Prowse claims that decision came as an unpleasant surprise.)

As we encounter him now in “Elstree 1976,” a deadpan documentary with notes of wistful irony directed by Jon Spira, Prowse is an elderly gentleman sitting by the heater in his suburban English home, telling slightly meandering tales of the past. And holding a grudge. Prowse has been a top attraction at “Star Wars” fan conventions for years, and why not? He really was the man behind the mask in all those scenes of Lord Vader stalking impressively across the screen, even if we never see his face or hear his voice. (No, that isn’t Prowse when the mask comes off at the end of “Return of the Jedi.” And he didn’t perform in the fight scenes either.) But his insistence on signing photos and memorabilia with “Dave Prowse is Darth Vader” instead of “Dave Prowse as Darth Vader” has apparently not endeared him to the palace guard at Lucasfilm, and has gotten him banned from officially sanctioned events.

Spira’s title may sound overly coy, but it reflects several important facts somewhat related to Prowse’s is/as predicament. First of all, this is a totally unauthorized, Kickstarter-funded documentary about the bit-part actors and extras involved in the making of “Star Wars.” It’s not a fan film as such; Spira himself has described it as “a bizarre, bittersweet, melancholy look at people’s lives.” Given that unofficial or anti-official status, Spira relies heavily on the fair-use doctrine, and avoids using the name of George Lucas’ original film or its trademarked characters whenever possible. Only a few brief clips from “Star Wars” (sorry, I mean from “Episode IVXXMXI: A New Hoop,” or whatever it’s called) are employed, largely by way of illustration: John Chapman, who has attended several “Star Wars” conventions identifying himself as an “X-wing pilot,” is not just making it up. There he is in the movie, in his X-wing pilot uniform! (For at least a second or two.)

Secondly, “Elstree 1976” tells the story of a random group of people who came together in the warm, wet summer of that year for a film shoot at Elstree Studios, in the northern suburbs of London. None of them had previously heard of George Lucas, and none had the slightest inkling they were shaping pop-culture history. Most thought “The Star Wars” (its working title) was a low-budget indie film, or an American TV production. Canadian actor Angus MacInnes, who played the X-wing pilot known as Gold Leader, says he was a huge sci-fi fan who could tell right away that this was something special. His colleagues were mostly aspiring London actors who worked odd jobs to pay the rent and got calls from Central Casting to head out to Elstree and get fitted for stormtrooper uniforms and prosthetic heads. No, wait, I’m not kidding: In London in 1976, the big clearinghouse for acting gigs was really called Central Casting.

What happened to them at Elstree that summer was strange and unexpected and sometimes magical; what happened later was mostly just strange. I can’t imagine how many times Anthony Forrest has told his story about how he wound up playing the immortal stormtrooper who learns that, no, these are not the droids he’s looking for, but it probably never gets old. (If you’re really a “Star Wars” nerd, you’ll also know that Forrest also played Fixer, a friend of Luke Skywalker whose scenes were cut from the film, but live on in YouTube heaven.) Pam Rose, a leggy model of that period who plays a nameless large-headed alien in the famous bar scene, is such a great hard-boiled London gal that I wanted to see Judi Dench play her in the story of her life. Then there’s Laurie Goode, a male model and aspiring songwriter in ‘70s London who remains pretty sure that he’s the stormtrooper who bumps his head on a sliding door in the movie’s most famous on-screen goof. He knows that other people have come out of the woodwork claiming to be Stormtrooper Ouch, and ruefully admits this isn’t a debate that forensic science can settle.

You’d have to say the distorted aftereffects of momentary fame have been a mixed bag, for most of these people. A strict caste system endures, 40 years after the Elstree shoot: Actors who played named characters in the movies, like Prowse or MacInnes or Paul Blake (the doomed alien bounty-hunter Greedo), view extras like Rose or Chapman with evident distaste. If your name isn’t in the official credits and you don’t have any lines (so their thinking goes), then you aren’t really “in the film” even if we can see your face, and you have no right to milk the fanbase for autograph fees and convention appearances.

I have no idea how I’d feel about that if I had a material interest, but in a sense this whole question is a lingering remnant of the old cultural standards that movies like “Star Wars” pretty much destroyed. Garrick Hagon (Biggs Darklighter) and Jeremy Bulloch (Boba Fett) had lengthy careers as film, stage and TV actors, but that’s not why “Star Wars” fans care about them. They’d like to consider themselves as artists or craftsmen on an entirely different level from some good-looking London bartender who got thrust into a uniform and shoved before the camera. The fact that they’re more famous for a few brief scenes wearing tin cans on their heads than for the rest of their careers put together is already a bitter pill. As Paul Blake puts it in the film, “I’m a serious actor. I’ve played Macbeth. And on my tombstone it will say, ‘Here lies Greedo!’”

David Prowse, with his insistence that he is Darth Vader and his persona-non-grata status in the official “Star Wars” universe, seems to embody all these peculiar contradictions in one person, and I almost wish Spira had made him the central character. Prowse was never really a serious actor, however he may wish to frame it now. He was a bodybuilder and model who got cast as Vader because he stood 6’7” and had an impressive physique. If he ever believed that Lucas ever intended to use his mild West Country accent as the voice of a fearsome intergalactic villain, he was deeply deluded. He doesn’t want to believe that his connection to fame is almost entirely accidental — and who among us would? He would probably be a happier person if he could spend his retirement years telling his grandkids about Green Cross Code Man, rather than spinning rancorous tales about the bitter afterlife of a really famous role he played 40 years ago that didn’t turn out quite the way he hoped. There’s some kind of lesson there, but it’s exactly the kind nobody can grasp until it’s too late.