Captain America's freedom fail: How the powerful few justify answering only to themselves

The seductive “safest hands are still our own” idea of "Captain America: Civil War" is sinister—and understandable 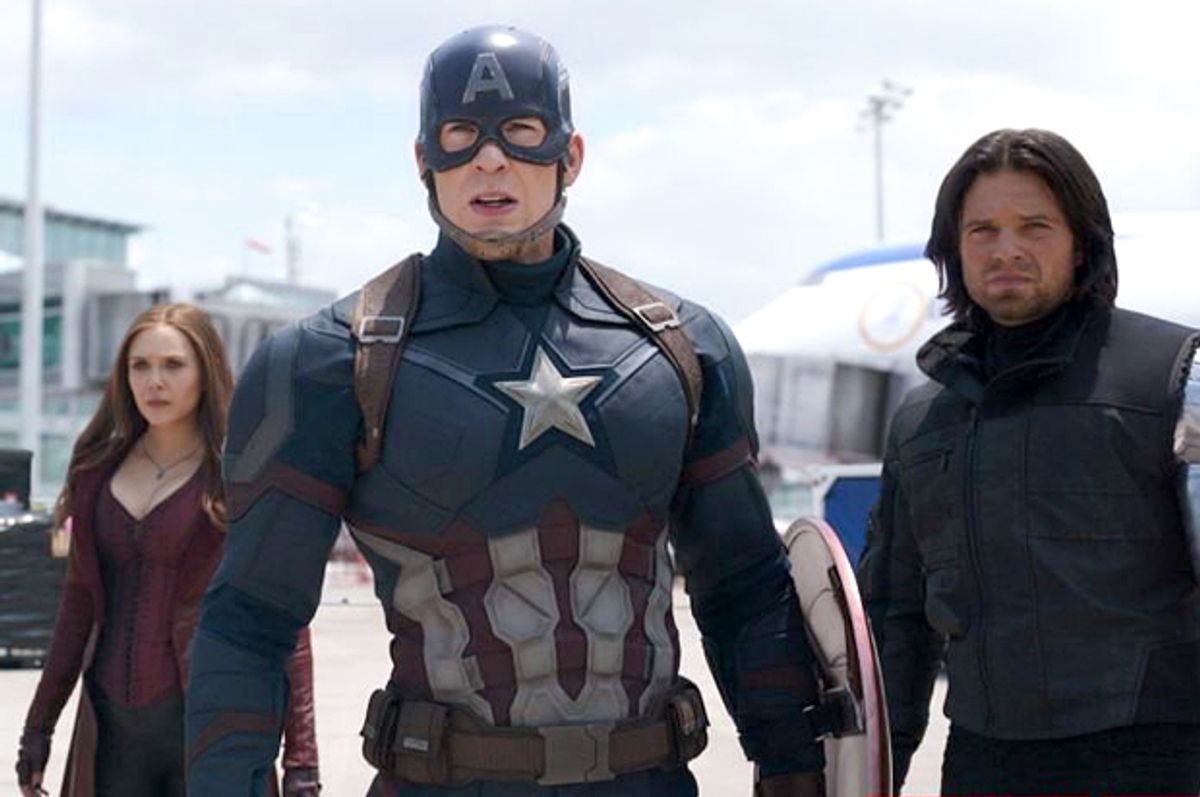 "If we can't accept limitations, we're boundaryless, we're no better than the bad guys."

So says Iron Man (aka Tony Stark) in "Captain America: Civil War," perhaps one of the most politically nuanced films ever released as a tentpole in a blockbuster franchise. This is a movie with a distinct social message, one that merits detailed analysis, but in order for that to happen I'll need to give away key plot points from the film. As a result, major spoilers follow this paragraph.

Back to Stark: "Captain America: Civil War" tells the story of an international agreement known as the Sokovia Accords that requires superheroes to register with the government and operate only "when" and "if" a United Nations panel deems it necessary. Captain America (aka Steve Rogers) immediately opposes this on the grounds that it violates their civil liberties, while Iron Man supports it because he believes that (as another character puts it) "victory at the expense of the innocent is no victory at all." Because superheroes often cause significant loss of life and property, the argument for accountability makes a great deal of sense — indeed, it's practically self-evident. Yet by the end of "Captain America: Civil War," the plot has decisively sided with Captain America and forced Iron Man to come around to his position … in this writer's opinion, incorrectly so.

This isn't to say that "Captain America: Civil War" is a bad film. Very much to the contrary, it is one of the best movies to ever come out of the Marvel Cinematic Universe, balancing engaging action set pieces and witty dialogue with intelligent character studies and ethical debates. Due to its political content and numerous superhero characters, it invites comparison to "Batman v. Superman: Dawn of Justice," particularly when the latter discussed how "in a democracy good is a conversation, not a unilateral decision." Unlike "BvS," however, the new "Captain America" is well-written and a lot of fun, which makes it much easier to recommend to casual moviegoing audiences.

It also does a commendable job of giving Iron Man's point of view a fair shake. At one point, the android Vision (who sides with Iron Man) rebuts Captain America by pointing out that "our very strength invites challenge. Challenge incites conflict. And conflict... breeds catastrophe. Supervision is not something to be dismissed out of hand." What's more, there is an unavoidable democratic logic to the Sokovia Accords, which is based on the premise that superheroes must be held to the same legal standards as non-superpowered human beings. There are unsettling real-world implications to arguing that "super" people should be allowed to change the world as they see fit without being accountable for the harm caused by their actions, even if said harm is unintentional (such as when we see Scarlet Witch accidentally blow up a building in Nigeria). When Captain America insists that "I know we're not perfect, but the safest hands are still our own," he actually flies in the face of the spirit of democracy, subordinating the will of the people to a belief in his own superior virtue.

Nevertheless, the movie winds up siding with him, and not only because his name is in the title. Obviously the superhero genre itself can't exist if its characters are forced to report to the government like glorified police officers, so there are practical reasons for the Marvel movies to maintain a comparatively anarchic universe. On a more profound level, though, "Captain America: Civil War" is the product of a culture that has been given excellent reasons to distrust state authority. Once the government gains power over superheroes, it quickly deprives them of their civil liberties, denying the arrested superheroes legal counsel, interning Scarlet Witch without trial, and ordering the assassination of a character (the Winter Soldier) whose innocence would save his life if only his civil liberties were being respected. Even when the government acts justly — such as when we see it imprison Falcon, Hawkeye, Ant Man and Scarlet Witch, all of whom are undoubtedly guilty of breaking the law -- it's still discomfiting to see this in action. We know these characters, we like them, and we recognize their good intentions, so it's painful to see them treated like criminals instead of heroes.

Nevertheless, if they existed in the real world, they would be criminals, so when Iron Man switches his views after seeing them incarcerated, the change of heart seems short-sighted rather than noble. It's understandable why he would feel sympathy for his friends, of course, but by opposing government oversight simply because he feels badly for them, he forgets that just because he knows them and the audience (in a sense) knows them doesn't mean that the billions of denizens in the Marvel Cinematic Universe know them on the same personal level. They are, and remain, unelected and unaccountable — and thanks to Iron Man's assistance in helping them escape at the end, remain that way.

It's worth noting that, when I saw this movie with my friends, two of us wound up getting involved in a heated debate on its political message immediately after the screening. One of them firmly sided with Captain America and the other had a decidedly mixed view on the film's political subtext, but both had deep reservations about the amount of power exercised by the state in this film. My theory is that, because our generation has seen our government violate individual liberties on a regular basis (from the war on drugs and NSA spying to law enforcement persecution of racial minorities), there is an instinctive distrust of state authority that is entirely reasonable. When my friends Adam and Jorge identify with Captain America's rhetoric on individual rights being the foundation of true justice, they're applying lessons that we have far too often seen be disregarded with terrible consequences. It is entirely possible for intelligent and well-intentioned individuals to see the world the way that Captain America does here.

The regrettable thing about "Captain America: Civil War" is that, instead of allowing Iron Man to remain resolute in his convictions as well, it forces him to give way so that the plot can move forward. While our world doesn't have superhumans, it has many individuals who wield disproportionate power over the rest of us because of unearned privileges — wealth, or being part of an empowered racial or gender group, for example. If we are going to create a free and just world, these concentrations of social and economic power need to be confronted and remedied, and just as a Captain America must exist to remind us that their individual rights matter too, so too is an Iron Man required to remind us that the freedom of the whole is infringed when the few can make themselves unaccountable to the rest. If "Captain America: Civil War" had been a truly insightful movie, it would have aimed to strike a balance between both of these perspectives. By ultimately siding with Captain America over Iron Man, it implicitly delegitimizes a valid and important perspective.