"This is why Ann Coulter has said that women shouldn't be allowed to vote": Sexist sports fans troll Seattle female politicians after NBA team denial 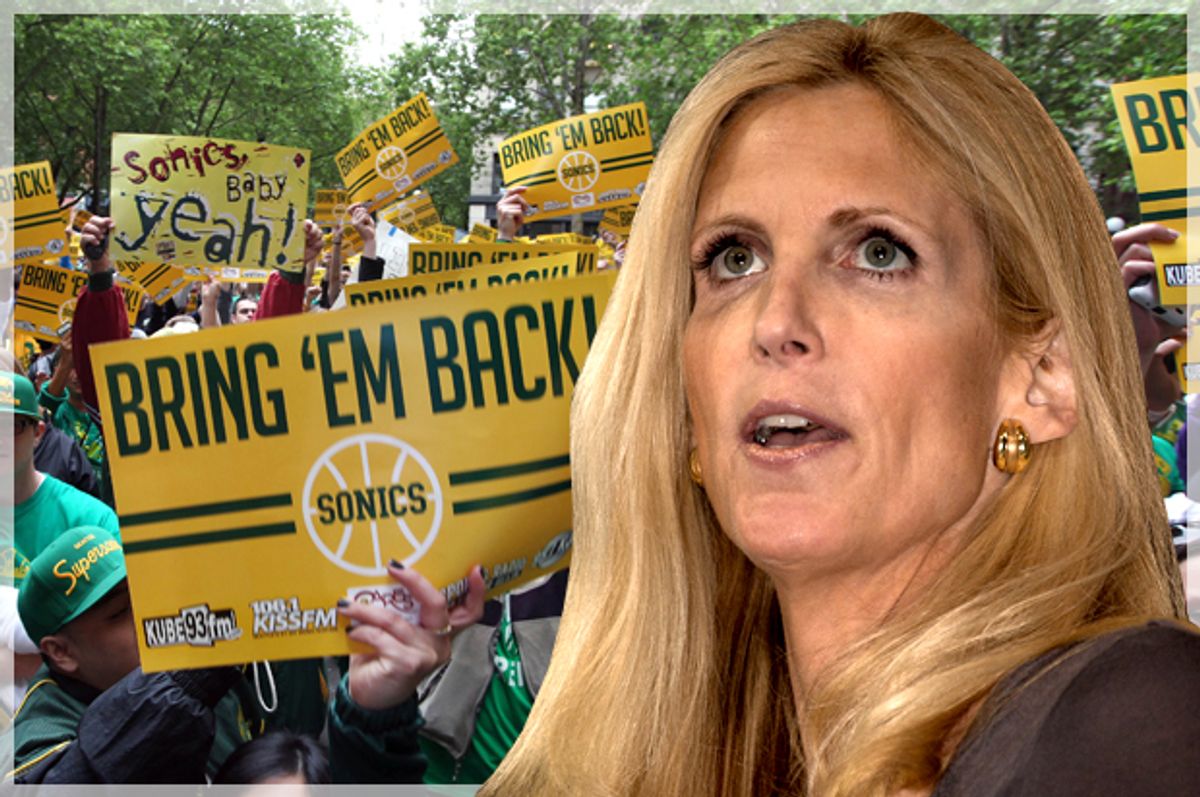 As consistent as the changing of the seasons, as enduring as Oprah's love for bread, you can always count on the baby humans of the Internet to pitch a tantrum when they feel their toys are in jeopardy — and, whenever possible, to direct that rage at women. Whether it's their guns, their games, their book clubs, or their sporting arenas, nothing says "masculinity so fragile" like turning a building development issue into an opportunity to bully women. Case in point — what's been going down lately in Seattle.

As the LA Times reports, earlier this week the Seattle City Council voted 5-4 against a developer's plan to build a new sports area that would bring pro basketball back to town — which lost the SuperSonics to Oklahoma City eight years ago. San Francisco developer Chris Hansen's $550 million proposed venue — which would have required $200 million from taxpayers — had sought also to attract an NHL team to the area.

The Seattle times notes that the five [who opposed the plan "cited various reasons for voting against the street sale, including concerns about Hansen not yet owning a team and about traffic related to the proposed arena disrupting Port of Seattle operations."

But when it emerged that the vote had been split down gender lines — five women to four men — the floodgates of vitriol opened. Speaking on behalf on the petulant crybaby constituency, a Lynwood attorney wrote to each female council member, "As women, I understand that you spend a lot of your time trying to please others (mostly on your knees) but I can only hope that each of you find ways to quickly and painfully end your lives… You have made this world a worse place by whoring yourselves out to the highest bidder. Each of you should rot in hell for what you took from me yesterday. I TRULY pray for nothing but horrible things for each of you moving forward."

And I believe him! I believe this is a man whose God metes out "horrible" punishment to women who might stand in the way of him going to local basketball games. The Seattle Times notes, by the way, that the man is currently "facing a two-and-a-half year suspension from the bar association for a separate complaint involving alleged sexual relations with a client."

On Twitter, meanwhile, commenters raged that "This is why Ann Coulter has said that women shouldn't be allowed to vote" and "I think someone should smash [councilwoman] Kshama Sawant's head into a brick wall." Council members Sawant, Sally Bagshaw, Debora Juarez, Lisa Herbold and M. Lorena González have thus far remained quiet about the online abuse, but Mayor Ed Murray issued a statement that "The disappointment some felt at the outcome of the vote is understandable, but what is not understandable is to bring gender into the conversation. It is wrong. To spout sexist rhetoric about council members is wrong."

And Chris Hansen stepped in as well, to say, "While we may not agree with the council’s vote, misogynistic insults, vile comments and threats are unacceptable and need to stop. We should all show respect for our elected officials and the legislative process, even if we disagree with their decision."

This isn't about expressing frustration over a political decision. This is the garbage that women in public life face every single day, from spoiled idiots, for being women with power. For further reading, by all means, check out the mentions in Hillary Clinton's Twitter feed sometime. And as Adam Brown, producer of the 2009 documentary "Sonicsgate," told the Sacramento Bee this week, "What we’re seeing is the lowest form of human communication. There is a lot of frustration on both sides, and some people are not taught how to handle it."