Pity the poor Republicans: Trapped by Trump between denial, dithering and surrender 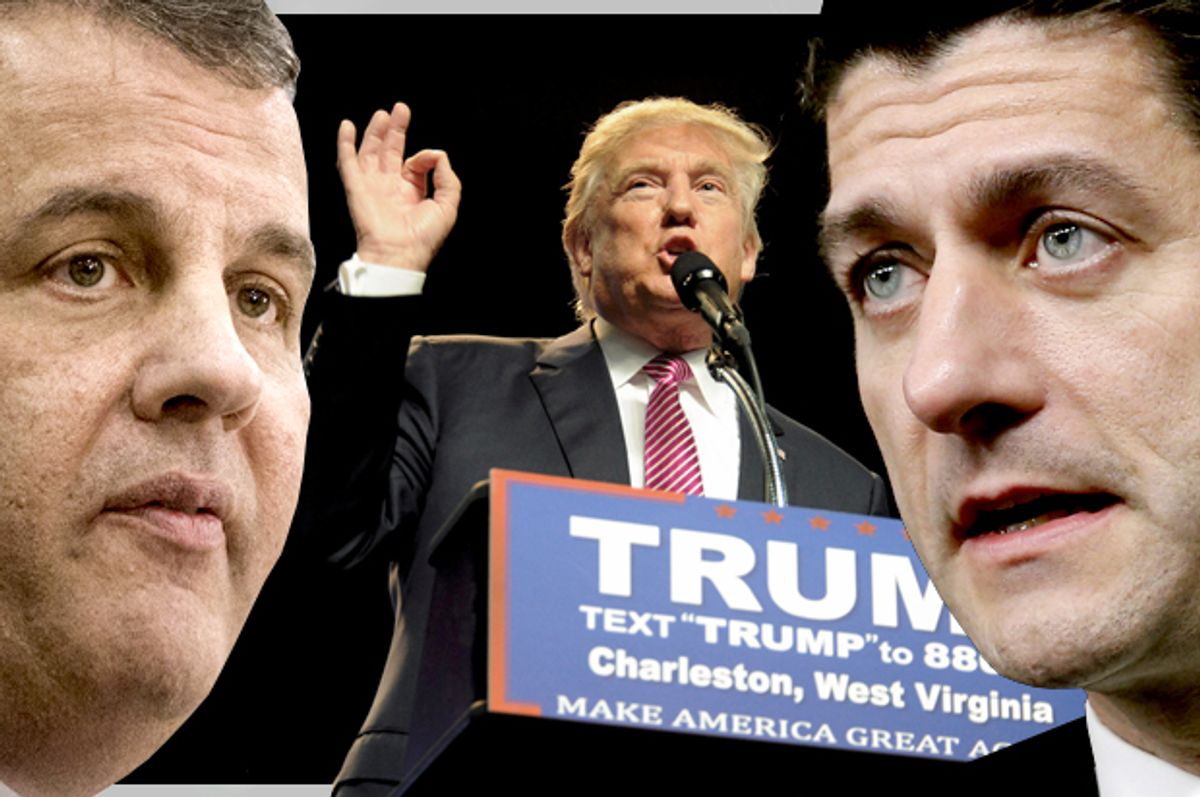 Can we spare a thought for the impossible dilemma now facing elected officials of the Republican Party? Not a whole thought, perhaps; maybe three-eighths of one. And very little in the way of compassion: The GOP’s cynical leadership class spent years building the Trumpian monstrosity that now threatens to devour it whole and spit out the bones. If Paul Ryan and Donald Trump are drifting away together into the infinite on a iceberg, like Dr. Frankenstein and his creation at the end of Mary Shelley’s novel, you can’t say it isn’t poetic justice. Especially since Republican policies are causing the polar ice to melt and … I’d better stop there before the metaphor gets even further out of control.

Considered as drama and a little bit as philosophy, however, the Republican predicament is undeniably rich with possibility. In the face of Trumpocalypse (Trumpnarok?) there appear to be three paths open to prominent Republicans. They may ultimately all lead to the same destination — misery, defeat and a diet of thistles — although we can’t know that for sure at this time. Democrats are busy assuring each other that this week’s batch of shocking polls that show Trump running almost even with Hillary Clinton in several crucial states is an aberration. That’s probably true, but count on this: All the Democratic backslapping and high-fiving and “We got this!” is going to give way, long before November, to sleepless nights and bleeding cuticles and chew-marks on the Xanax bottle.

But I digress: There are three paths for Republicans, and whether or not they all end up in the same place they’re all deeply pathetic. Or maybe shallowly pathetic. Which makes for good spectator sport, at least for now. There is the Way of Loneliness, the path of noble rejectionism chosen by the Bush family and Mitt Romney and various others, who have chosen to turn their backs on the fallen world of Trumpishness and walk the cliffs in widow’s weeds, gazing out to sea like Meryl Streep in “The French Lieutenant’s Woman.” (Yeah, I realize that reference dates me badly, first of all, and is hopelessly obscure.)

Not everyone who walks the Way of Loneliness does so for the same reason. Romney and the Presidents Bush can insist that they’re standing on principle all they want, but they’re standing aloof from a party that has specifically ridiculed them and kicked them out, many of whose voters would be delighted to show them the Moon Door. Sen. Ben Sasse of Nebraska, who at least until now was a rising star on the GOP’s far right, came out as a Trump-hater months ago and is too much of an ideological purist to take it back. He’s something like a less noxious Ted Cruz, and represents the GOP cadre that still thinks Tea Party politics reflected core libertarian beliefs, and not just rampant racism and incoherent nihilism. That’s a genuinely principled position! We shouldn’t let the fact that it’s wrong on every possible level seven ways to Sunday stop us from congratulating Sasse for his integrity.

Speaking of love that feels so wrong it can only be right, there’s also failed presidential candidate and budding late-night star Lindsey Graham, the Robin Goodfellow of Republican senators. Graham has the remarkable distinction of hating Trump and Cruz with nearly equal fervor, having many times expressed the correct and obvious view that the GOP has no long-term future if it drives away all blacks and Latinos and appeals only to white people who have never ridden on public transit (or used the Uber app). Of course, the Trump moment is precisely about not caring about the Republican future, or anybody’s future — he’s the Sex Pistols of politics! Moreover, Graham is an old-time neocon who hates Trump for one of the latter’s few redeeming characteristics, his notable lack of enthusiasm for endless global war.

One could play Socrates here and wonder why establishment Republicans of Graham’s ilk don’t just jump ship and endorse Hillary Clinton: Sure, they have their areas of disagreement, but when it comes to the big, broad strokes of economic and foreign policy, they have a lot more in common with her than they do with Trump. Except that the answer is obvious: Unless Graham is ready for his retirement gig as a star of stage and screen and the host of legendary Charleston garden parties, he’s got to run for re-election in South Carolina, where Clinton and her husband (for inexplicable reasons) are slightly less popular than Satan or pubic lice.

If you think outcasts like Graham and Sasse and Jeb Bush are sad, well, at least they have their dignity. Or they can pretend they do. Then there is the Way of Waiting and Wishing and Hoping, the path of the wallflower exemplified so perfectly by Paul Ryan. If you think I’m hauling out another vaguely offensive feminine stereotype of the 20th century — well, you’re right. This is the Republican Party we’re talking about! Paul Ryan, a person who is the Speaker of the House of Representatives and third in line for the presidency, is pretty much waiting at the church door with a wilting bouquet in his hands. He wants the roguish, orange-hued hero to show up and sweep him off his feet! He hopes it will happen! But he’s also prepared to dry his tears and walk away if it turns out that true love is just an illusion.

Ryan and John McCain and Mitch McConnell and virtually every commentator and talking head in what might be called the center-right of the Republican Party (that is, the crazy-town, far-right fringe of the real world) look so pathetic they can’t perceive their own pathos. They can’t say yes and they can’t say no; they dither. They pretend to bargain and make demands, without seeming to realize that they have no bargaining power and are in no position to demand anything.

Those who walk the Way of Wishing and Hoping are worse off than the proverbial bride on the church steps, honestly; they're more like the heroine of the romance novel at her lowest point, when she urges her dangerous lover to lie to her: There is no madwoman in the attic! Tell us you're a real conservative, Donald, murmur these Republican dreamers. Tell us that in the unlikely event you get elected, you'll forget all the crazy things you said to all those crazy people and love us instead!

There is no dignity there, Mr. Speaker, not even the Bush-Romney bogus dignity of the jilted. I'm sure Ryan isn't too worried about Sarah Palin's vow to end his political career over his Trump-dithering and Trump-doubt: Oh no, the most ridiculous person in the country doesn't like me! But that signifies how much of the once-solid Republican iceberg has melted away from beneath his feet. And let's say this for Palin: At least she made a choice and picked a side, while most Republicans were hoping someone else would do it for them, or that a trapdoor would open in the floor so they could disappear.

Consider Chris Christie, universally mocked a few weeks ago as the GOP's version of Gríma Wormtongue, having chosen the Way of Submission and Surrender, the path of craven toadying to power. Time to stop laughing, I would say. Like the heroine of "50 Shades of Grey," Christie has discovered that what looks like slavery leads to freedom. He is now the head of Trump's presidential transition team, a concept both hilarious and terrifying that actually exists in the real world, and is first in line for whatever job he wants in the Trump administration.

If you'd like to argue that Christie has sacrificed everything he supposedly believed in to sign on with Trump, that his political career is now over and that he's barely even pretending to be the governor of New Jersey -- well, yeah. In the wake of Bridgegate and numerous other Garden State scandals afflicting his administration, that was already true. Christie read the writing on the wall and went all-in on a desperate political gamble we can only hope won't pay off. There is a certain undeniable, evil bravery in that.

If you're in the mood to contemplate "Twilight Zone" scenarios, try this one out: Trump somehow gets elected, which despite Democratic smugness and complacency (or because of those things) is not inconceivable, and Christie becomes the guy tasked with making sure he runs a somewhat normal government instead of a stupid homegrown Fourth Reich. We may end up feeling eternally grateful that Christie had the courage and foresight to follow the path of spineless mendacity.