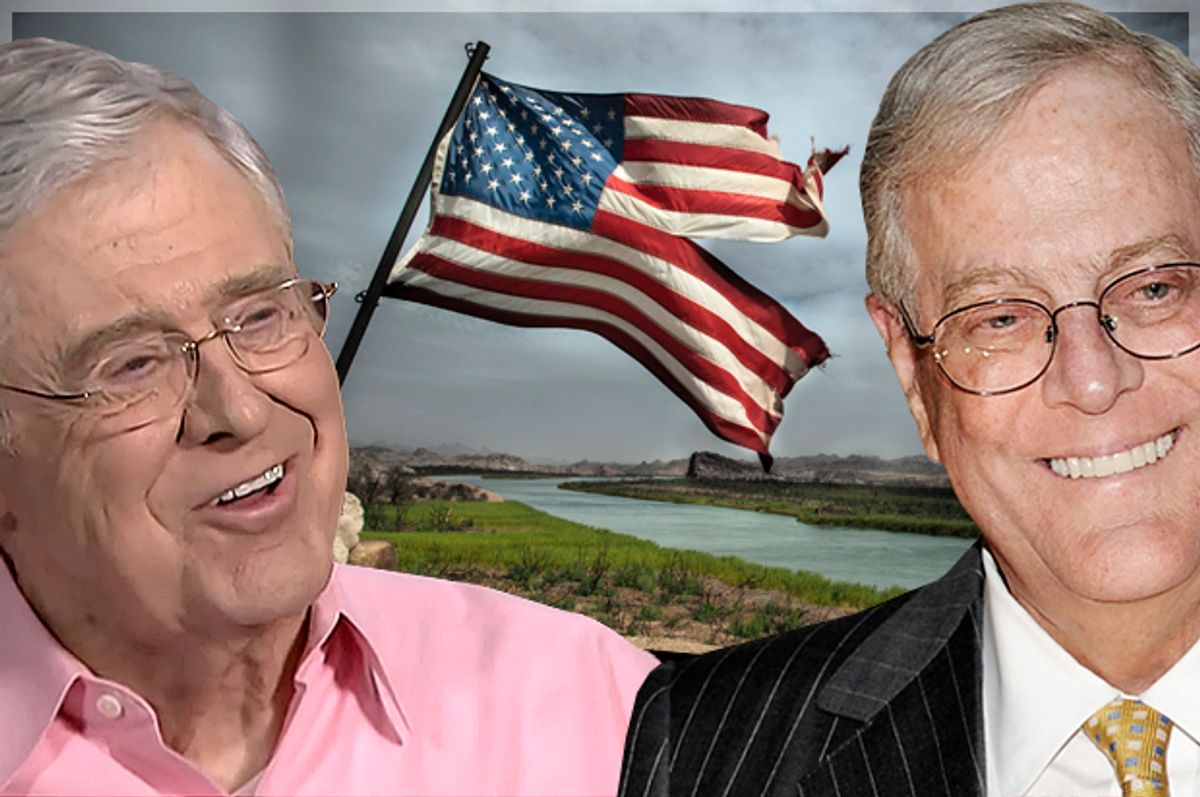 The Koch Brothers want to pull back on national politics, according to the National Review, because their business and public relations wings have grown weary of the spotlight. “Concerned about the damage being done to their corporate brand [and] increasingly bothered by their public vilification,” the Kochs have decided to rethink their approach to politics. They operated at their best in the shadows – working on ideas in think tanks, in universities, at the state and local level. Being the poster child for corporate-tinged conservative activism risked discrediting their entire project.

But the target on the Kochs’ backs isn’t likely to disappear just because they narrow their focus and retreat to darker corners. In fact, one progressive organization recently uncovered how Koch Industries uses every trick they can wring out of governments worldwide to avoid paying taxes.

American Bridge 21st Century, a liberal Super PAC that researches and analyzes conservative political candidates and their funders, has uncovered 610 companies they believe to be subsidiaries of Koch Industries, registered in 17 known global tax havens. The majority of the subsidiaries (339) can be found in two of the worst tax havens on the planet: Bermuda and the Cayman Islands.

Those 610 are merely the ones found by American Bridge with a simple search of companies containing the name “Koch,” associated brands Dixie, Georgia Pacific, Molex, Flint Hills, or Invista, or some variation on those names. The potential exists for many more subsidiaries in other tax havens or under more secret names. In fact, back in 2005, Koch submitted to the SEC a list of countries with Koch subsidiaries, which included tax havens not part of American Bridge’s analysis, like the British Virgin Islands.

The subsidiaries in the study go back decades: The earliest one found, Georgia-Pacific SA in Switzerland, dates back to 1971. While 73 of them are listed as defunct, dissolved, liquidated, or inactive, including the single subsidiaries in Gibraltar and Mauritius, that leaves hundreds of others either still operating or with no information as to their status. Another decades-old Swiss subsidiary, Koch Minerals Sàrl, remains active though it was registered in January 1972.

In addition to Bermuda (122 suspected Koch subsidiaries), the Caymans (217), Switzerland (46), Gilbraltar (1) and Mauritius (1), other tax havens studied included Aruba (2), the Bahamas (3), Bahrain (1), Barbados (7), Belgium (14), Cyprus (2), Hong Kong (43), Ireland (18), Luxembourg (63), the Netherlands (31), Singapore (37), and the United Arab Emirates (2). Most of the countries were listed in a Congressional Research Service report identifying tax havens, and the others were either designated tax havens in reports by the European Parliament, named in the “Who’s Who” of European tax havens, or, in the case of the UAE, openly offered themselves as a tax haven to businesses leaving Cyprus during their economic collapse in 2011.

For this reason, American Bridge strongly suspects that the subsidiaries are used to shift and hide profits for the purposes of tax avoidance. “This is not an instance where Koch Industries is manufacturing or has factories in these different countries,” said Eddie Vale, Vice President of American Bridge. “They’re not making or creating anything. It’s all just moving money around.”

Here’s one way this works: Invista, a chemical reprocessing business, needs a lot of patents for its technology and operations. If you register those patents in the United States, the profits derived from them would be taxed at the 35 percent corporate tax rate. But if you register the patents with a subsidiary in a low-cost tax haven, you can save billions of dollars. Luxembourg, for example, has an 80 percent exemption on any royalties or capital gains derived from intellectual property like patents.

There are six Luxembourg subsidiaries with the name “Invista” in the title. And there are 299 patents registered to companies named “Invista” in the Luxembourg patent office. Another 125 Invista patents, American Bridge found, were registered in low-tax Singapore, held by Swiss-based subsidiary Invista Technologies S.À.R.L. Other patents and trademarks were transferred from U.S. companies to subsidiaries in Cyprus, Singapore, and Ireland, allowing the profits derived from them to be earned in those low-tax countries.

Koch claims that Invista is headquartered in the United States, but they are formally owned by a holding company operating out of the low-tax Netherlands, according to a 2014 report from the Center for Public Integrity. “They like to talk about being from the heartland, where America works,” said Eddie Vale. “But they’re sending the intellectual property and the profits abroad.”

Koch also creates webs of interlocking companies that shuffle profits through an internal company bank named Arteva Europe S.À.R.L., which facilitates the cash flow transfer. The internal bank uses derivatives and special financial vehicles to obfuscate the source of profits. It also can move loans from one subsidiary to another without paying taxes on the “hidden distributions” of money.

The purpose of all of this is to wash corporate money out of the high-tax countries and into the low-tax ones. Because Koch Industries is privately held, we do not actually know their effective U.S. corporate tax rate. But the prevalence of subsidiaries in tax havens, and the business of where they site their patents, tells enough of the story. In addition, Koch Industries’ private status robs them of a key alibi made by public companies, that they have a fiduciary duty to shareholders to minimize their tax rate. Koch Industries can’t lean on this excuse. “As a private corporation, they have no obligation to anyone but their own personal bottom lines,” said Eddie Vale.

The revelations come at a time when global governments, embarrassed by investigations like the Panama Papers showing how easy wealthy individuals and corporations can avoid taxes by hiding them in shell companies, have begun to crack down. “There’s a growing awareness of the extent to which large corporations are gaming the system in ways that ordinary people don’t have access to,” said Eddie Vale. While it’s hard to pinpoint whether any of Koch Industries’ behavior is illegal or simply clever manipulation of the tax system, American Bridge hopes that regulators will try to find out. Vale cited a similar study of tax evasion by U.S. fast-food giant McDonald’s, which led to a European Union investigation.

Ironically, the Koch political wing has been animated about eliminating government-provided corporate tax benefits and perks, which they call “crony capitalism.” Charles Koch’s self-perception of how he runs his business is evident in his book title, “Good Profit.” But the Koch subsidiaries study intimates that the conglomerate has no problem accepting favors from obliging governments around the world. “The Kochs are happy to suck money out of the system,” said Eddie Vale. “They claim to be principled, but they have no problem taking government money.”