Donald Trump doesn't want this out: The billionaire braggart may not be a billionaire at all 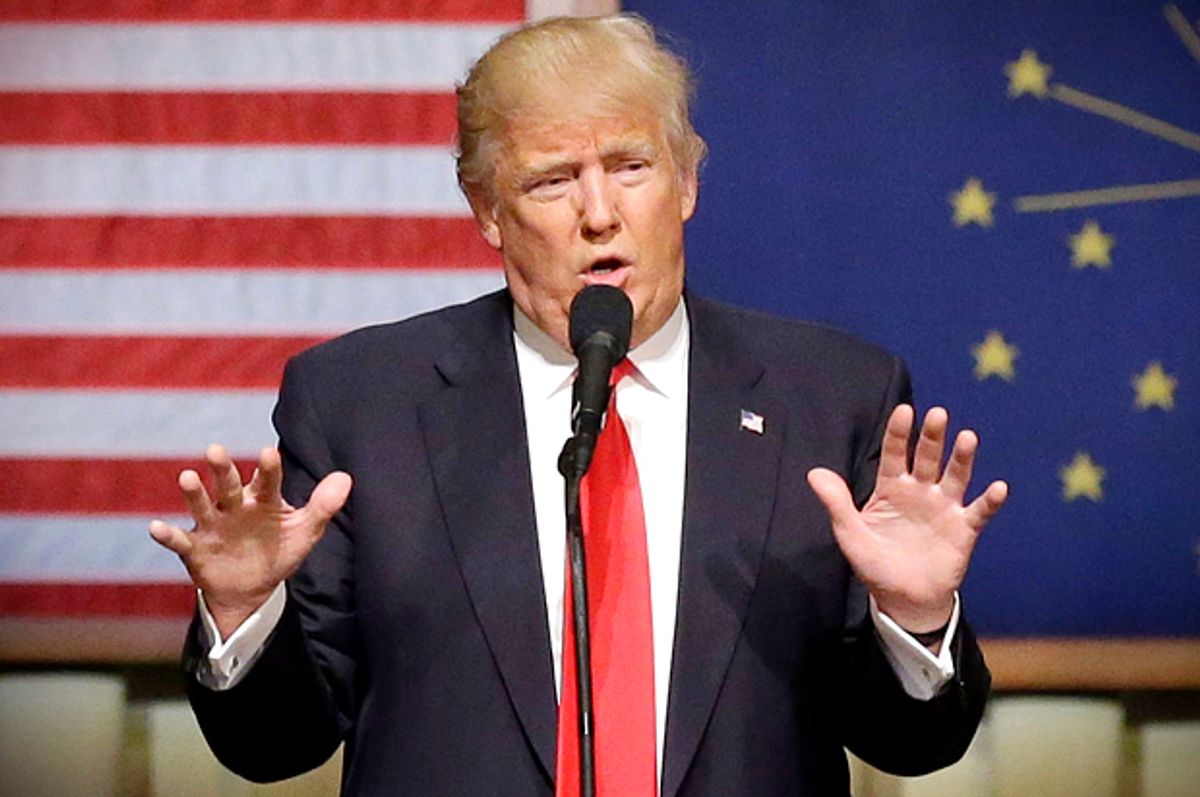 “I’m really rich,” Donald Trump said when he was announcing his run for president and many times since. The image of Trump as a billionaire businessman, impervious to donor influence and thus fully able to do and say as he pleases, has been a key part of his appeal to followers. But nailing down Trump’s actual worth in order to get a full accounting of his supposed billions has been difficult, and his refusal to turn over his tax records has only added to the mystery.

Crain’s New York Business did some digging around Trump’s finances, and the answer could be that he makes far, far less per year than he’s boasted about. According to the outlet, for the last three years, Trump qualified for a tax break that only applies to married couples who take in less than $500,000 a year. Granted, half a million dollars a year is nothing to sneeze at, but it’s much less than the $362 million he’s previously said he raked in during 2014. According to Crain's:

It’s called the STAR program, which stands for the New York State School Tax Relief Program and has been around since 1997. It offers an approximately $300 annual benefit for those who qualify. Hundreds of thousands of New York homeowners get it. Here’s where it gets interesting for Trump: To be eligible for STAR, a married couple must have annual income of $500,000 or less. One wouldn’t think a guy as rich as Trump claims to be would qualify, but records filed with the city’s Department of Finance show he received a $302 STAR benefit on his latest property-tax bill for his Trump Tower penthouse on Fifth Avenue.That means whatever his annual income is, it's less than $500,000.

"It's strange that a billionaire would apply for a $302 tax benefit and, moreover, that he would take it," said Martha Stark, a property-tax expert and former New York City finance commissioner who is now a lecturer at Baruch College.

When Crain’s checked with Trump’s campaign to account for the massive discrepancy in Trump’s stated income versus what’s on paper, the candidate’s team said the whole thing is a mistake:

Trump's campaign manager, Corey Lewandowski, said the tax benefit was "an error on the part of the city of New York" and that Trump received the benefit over the past three years even though he hadn't asked for it since 2009, when tax authorities began checking on applicants' income. The city's Finance Department said it checks with New York state tax authorities every year to make sure applicants for the STAR benefit have income under $500,000. A spokesman for the New York State Department of Taxation and Finance said STAR recipients had to provide a social security number in 2013 as part of statewide registration program.

Crain’s did a followup to the original article in which a New York City official is quoted saying that “[Trump] should not have received the abatement and should return the full value to state taxpayers."

But as Talking Points Memo points out, that doesn’t totally answer all the outstanding questions here:

Shortly after Crain's initial report in March, New York City officials said they believed Trump had received the tax break in error and asked Trump to pay up. But it wasn't clear that New York City was saying he'd received the tax break in error because of his taxable income on file with the state. It seemed either to be because of hispublicly professed wealth or because the Trump Tower apartment may not even have been his primary residence. He's apparently listed two primary residences in New York City. So, as Crain's notes, New York City's statement still suggests that Trump's income was at some point in the last three years less than $500k. (This follow-up article from Crain's gives the best, though rather byzantine, explanation of how Trump got the tax break in 2014, 2015 and 2016. The key detail is that however Trump got set with the STAR tax break, the "city's Department of Finance ... checks yearly with state tax authorities to ensure STAR participants are earning less than $500,000. A state tax official confirmed that the state receives a list of STAR recipients every year and notifies the city of who is eligible.")

Is it possible that Donald Trump actually makes just $500,000 a year? Or perhaps more likely, that at least once in the last few years, he took home only $500,000, but continued to take advantage of a tax break he was ineligible for in exchange for a paltry sum by billionaire standards, until he got caught? Hard to know from here.

But considering that Trump’s personal wealth is debated by so many sources, including Trump (Bloomberg pegs it at $2.9 billion, Forbes at $4.5 billion, and the Donald himself first at $8.8 billion, before elevating it to “in excess of TEN BILLION DOLLARS”), it’s hard to know which figures to trust. Trump himself has said his net worth rises and falls with his emotions. Here he is giving a deposition in a 2006 lawsuit:

Q. Let me just understand that a little bit. Let’s talk about net worth for a second. You said that the net worth goes up and down based upon your own feelings?

Q. When you publicly state what you’re worth, what do you base that number on?

A. I would say it’s my general attitude at the time that the question may be asked. And as I say, it varies.

The last journalist to see Donald Trump’s tax returns was Timothy L. O’Brien, the respected author of the book TrumpNation: The Art of Being the Donald.In it, O’Brien notes that “three people with direct knowledge of Donald's finances, people who had worked closely with him for years, told me that they thought his net worth was somewhere between $150 million and $250 million.” Plenty of money, for sure, but not nearly a billion dollars. Trump promptly sued him for that assessment (that’s where the above deposition comes from).

O’Brien notes in a recent column that despite Trump’s insistence that “there’s nothing to learn from” his taxes, as a man vying to lead this country—with his wealth as one of the central reasons why—there should be transparency about his accounts.

“For the last 40 years, presidential candidates have released their returns,” O’Brien says. “Trump, of course, has portrayed himself as the un-candidate, the guy who bucks convention. But disclosing tax returns is a valuable political tradition that’s well worth preserving.”