Yes, Bernie's waging war on the Democratic Party — but if Hillary loses, it won't be his fault

Nevada was ugly, all right — but it won't decide the fall election, and saving Hillary is not Bernie's problem 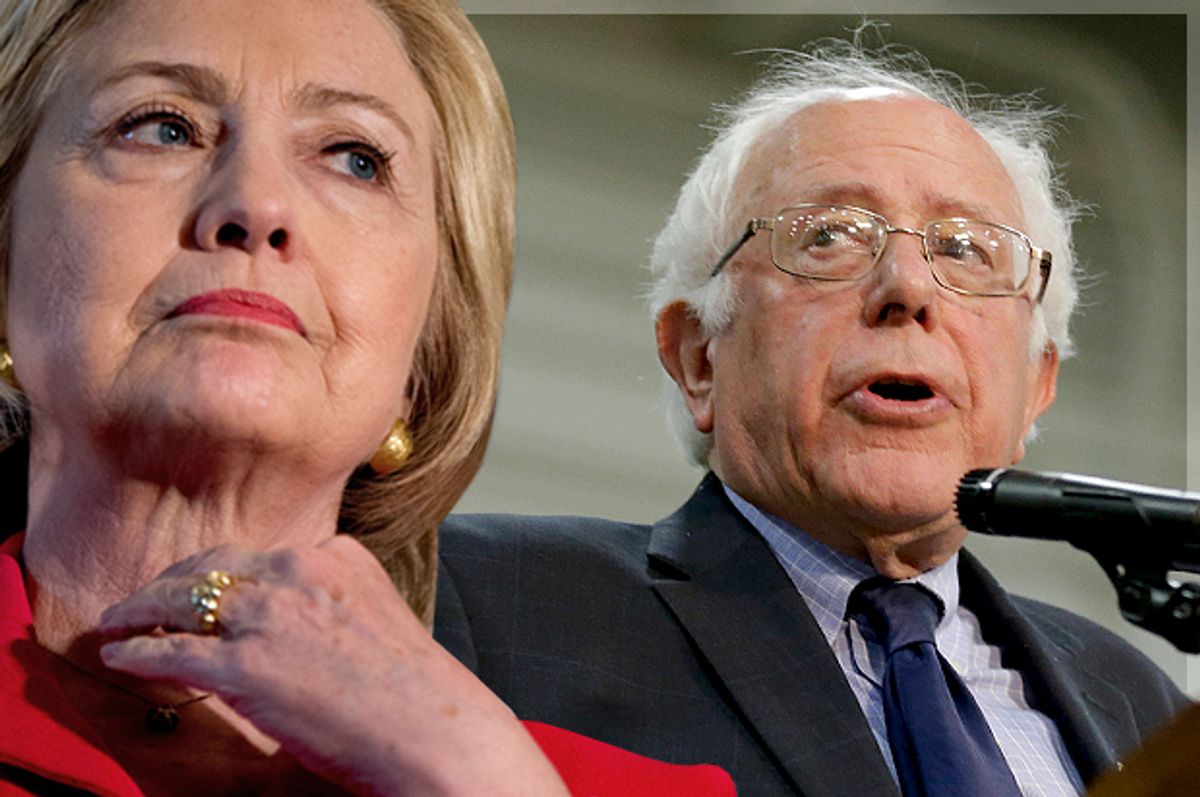 Hey, remember what I said about the coming civil war in the Democratic Party, and how it wouldn’t necessarily be a whole lot more polite than the Republican version? Well, everybody who spouts opinions for a living loves to say “I told you so,” but in this case I can’t claim that: Neither I nor anyone else thought it would get here quite this quickly. After the ugly, angry chaos of the Nevada state convention last weekend and Bernie Sanders’ big victory in the Oregon primary on Tuesday — to go with a virtual tie in Kentucky, where Hillary Clinton won by fewer than 2,000 votes — Democrats now face the possibility of a highly contentious convention in Philadelphia this summer, where the outcome may not be in doubt but the mood will hardly be harmonious.

And so we’re being treated to a new round of institutional angst from the Democratic establishment, along with considerable wailing and gnashing of teeth among the pundit class. CNN spent much of Wednesday playing the same clip of rowdy Sanders supporters in Las Vegas over and over again, and then allowing Barbara Boxer and Debbie Wasserman Schultz to express their outrage and dismay that such uncivilized conduct could occur among Democrats. Paul Krugman, who has turned his New York Times column into a mouthpiece for Clinton talking points, told us (not for the first time) that Sanders and his supporters were ill-informed about how things worked in the real world, and needed to get off his lawn. Dianne Feinstein dropped dark hints about “going back” to the disastrous Democratic convention of 1968, a reference that may have been more revealing than she intended.

All of this boils down, pretty much, to the idea that since Sanders has no realistic chance of winning the nomination he has no right to continue his campaign into California and onward to the Democratic convention. By doing so, we are told, he is destroying the mystical commodity known as “party unity” and endangering Hillary Clinton’s prospects in the fall. Intra-party discord like that seen in Nevada, Wasserman Schultz purred to the CNN cameras, can only benefit Donald Trump. On a broader scale, there’s a clear implication that whatever may be going wrong with the Clinton campaign and the Democratic Party is Bernie Sanders’ fault, and would disappear if he did. The best thing Sanders could do is go back in a time machine, drop out before Iowa and allow Clinton to sail through the primary season unopposed on a rising tide of power-suited smugness. Failing that, he could at least have the decency to drop out of the race immediately, prostrate himself before the Democratic temple and vow undying fealty to a party to which he hasn’t actually belonged since the 1970s.

Virtually all of that is nonsense — well, except for the part about Sanders having no chance to win the nomination, which leads to the legitimate question of why he’s staying in the race and what he hopes to accomplish. There are several interlocking but separate issues in play here, and it’s important not to get them hopelessly confused. What happens to the Democratic Party in the short term — that is, the question of whether its weak, troubled and widely unpopular nominee might actually lose the election to a moronic billionaire blowhard with zero qualifications — is an entirely different question from where the party will find itself in five or 10 years. One thing we can say for sure about Hillary Clinton, win or lose, is that she represents yesterday’s Democratic Party. Tomorrow’s party is up for grabs, and that’s the discussion Sanders and his supporters are trying to drive forward.

When it comes to the immediate past, let’s be clear about that nasty Nevada convention: What happens in Vegas stays in Vegas. No, seriously: The optics were dreadful and both sides behaved badly, but it’s unlikely to have lasting effects (at least once my former colleague Jake Tapper finally gets sick of it). And no, Sen. Feinstein, it does not portend the beginning of a summer of street violence or a convention whose nominee is chosen in back-room deals. (That was what I meant by unintended significance: Chicago ’68 was the last convention, for either party, in which party officials selected a nominee behind the scenes, without even pretending to care about the primary voters.) Yes, the bitterness you can feel boiling up in those Nevada video clips signals how deep the fractures run in the so-called Democratic coalition, but a few overheated Bernie supporters cursing and kicking over chairs tells us nothing about how the nation will vote in November.

There’s no excuse for personal insults or threats of violence, and the Sanders campaign needs to do more to calm down its most belligerent supporters. What his hothead activists are reacting to, on the other hand, is legitimately enraging: In state after state, the Clinton campaign has used its control of Democratic Party institutions and procedures to manipulate the delegate count and control the process. Maybe that reflected the wagon-circling mentality of power, because as Salon’s Sean Illing pointed out on Tuesday, it simply wasn’t necessary. Hillary Clinton has won a clear majority of Democratic primary voters and a clear majority of pledged delegates, under the rules in place before the process started. Sanders supporters may not like those rules or that process, and are fighting to change them going forward, but that’s a separate issue.

Sanders and his campaign operatives can count. They know that Hillary Clinton is less than 100 delegates away from securing the necessary majority, and that the mathematical possibility behind their last-ditch strategy — finishing about even with Clinton in pledged delegates, and then convincing hundreds of superdelegates to switch sides — has all but disappeared. Sanders knows he will not be the 2016 nominee. He is trying to channel the passion and anger of his supporters into a forceful role at the Philadelphia convention, and then into a different and more open Democratic Party in the years ahead.

Debbie Wasserman Schultz and Barbara Boxer and Dianne Feinstein have a point, up to a point: Sanders is using the threat of a discordant and contentious convention to try to break down the walls of the Democratic Party fortress they have constructed, and bring an end to their power. But when they shriek and throw up their hands and say that if we don’t have immediate and unquestioned “party unity” we will get 1968 and President Donald Trump and the opening of the Seventh Seal, that’s disingenuous in the extreme.

As has been widely observed during this race, the 2008 contest between Hillary Clinton and Barack Obama was at least as bitter and vitriolic as the Clinton-Sanders race, although there was considerably less ideological distance between the candidates. I have previously observed that there is no historical correlation between a bitterly disputed primary contest and what happens in November; citing 1968 is no more than fearmongering. Consider 1992, when former (and present) California governor Jerry Brown — perhaps the closest Sanders-cognate of all recent Democratic dissidents — ran clear to the end against Bill Clinton and went to the New York convention with almost 600 delegates, ensuring himself a speaking spot. Brown hated Clinton’s guts and viewed him as a shameless phony (and should get some credit for getting that right). He never endorsed Clinton — not at the convention, not during the fall campaign and not at any other time. Remind me how the absence of “party unity” destroyed those Democratic nominees?

Every general-election campaign is its own animal, largely determined by its own internal dynamics and by unpredictable news memes or twists of fate. Think of Richard Nixon sweating unpleasantly or Michael Dukakis in that tank (looking, observed David Brinkley, like Rocket J. Squirrel); think of the Swift Boat attacks on John Kerry, or the fallout from Mitt Romney’s “47 percent” remarks. This year’s Clinton-Trump campaign will also pivot on unknowable unknowns, but one thing I feel sure about is that they’ll have nothing to do with how a few enraged Sanders supporters misbehaved in May.

If the Democratic establishment is increasingly anxious about its prospective nominee, who appears headed for a perilous, nail-biting and shockingly tight race against the most ignorant and least qualified major-party nominee in political history, that’s for good reason. But Bernie Sanders did not create the Democrats’ current dilemma, and cannot solve it.