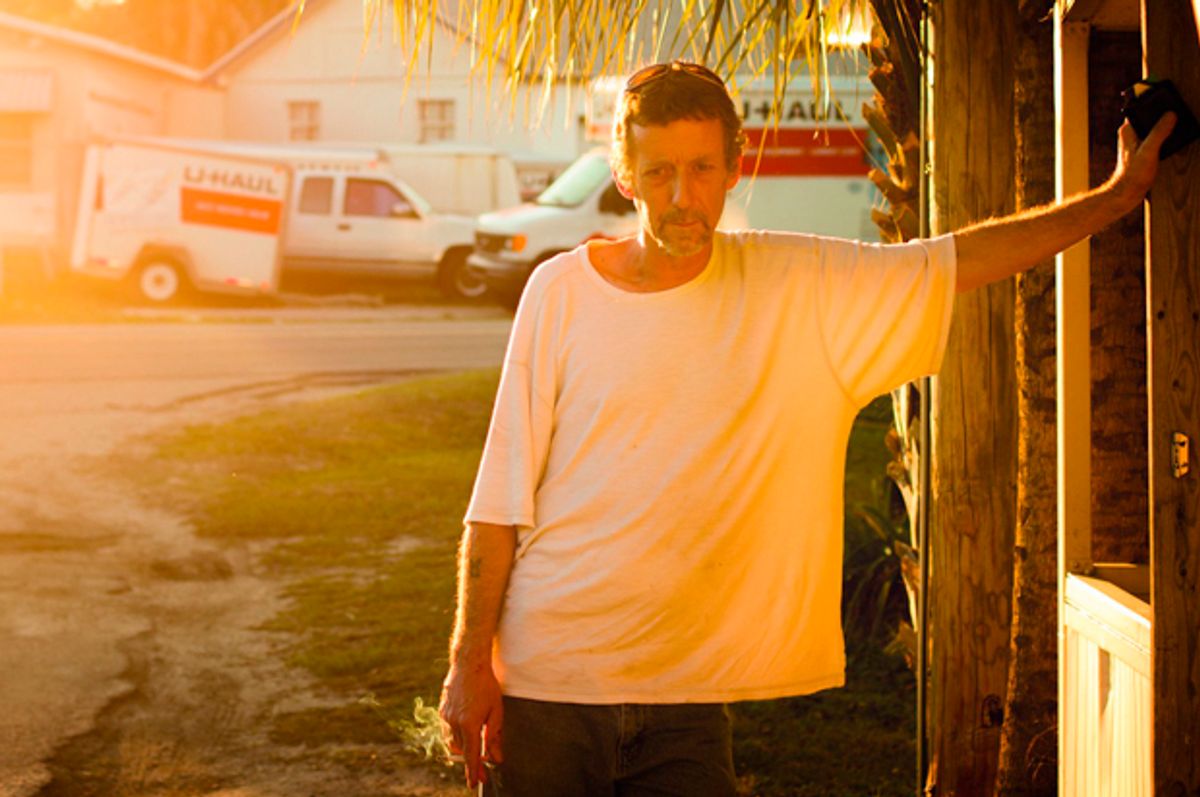 Everyone we meet in the documentary “Pervert Park” has made bad decisions. You don’t end up in a mobile-home community for sex offenders on the outskirts of St. Petersburg, Florida, if you’re the sort of person who consistently does the right thing. Admittedly, you and I have made bad decisions too, without taking it quite that far, and watching this movie requires the recognition that we might have things in common with our society's most despised outcasts. Their stories are startling, and all different — although there are definitely some consistent themes — and however you feel about the question of how to deal with the 500,000 or so convicted sex offenders now living in the United States going into the film, you’re likely to feel different coming out.

This is an unassuming documentary with minimal on-screen text and no voiceover narration (close to cinéma-vérité, though it may not literally qualify), entirely focused on a small group of people in a godforsaken place most of us would drive past without noticing. The fact that it was made by a Scandinavian couple (the Swedish filmmakers Frida and Lasse Barkfors) is not an accident; few American directors or funders would want to touch this subject matter with the proverbial 50-foot pole, a Hazmat suit and a bomb-disposal robot. Nor is the fact that “Pervert Park” held Sundance audiences mesmerized last winter; although the Barkforses and their subjects barely even hint at the larger social background, this is a miniature portrait of a society whose moral compass has gone awry and whose basic human decency is in doubt.

It borders on cliché to say that a film like this “humanizes” a class of people widely regarded as untouchables, but it’s also precisely correct. To render someone as a complicated individual possessed of the self-consciousness distinctive to our species is not, of course, to excuse the things they have done. In some cases, like that of Patrick Naughton, a resident at Florida Justice Transitions — the actual name of Pervert Park — the self-consciousness is truly chilling. Naughton calmly tells the filmmakers he has no problem with the idea that “higher-level” offenders like him should be clearly labeled and closely monitored. (There's no point in any of this film's subjects trying to remain anonymous, since their names and mugshots are listed on public sex-offender registries available to anyone with a smartphone.) He has spent countless hours compulsively watching child pornography and rape pornography. He has violent sexual fantasies he shares only with counselors and trusted friends. By his own account, he has raped at least two children. Without the kind of help and support he gets from counselor Don Sweeney and the FJT residents, Naughton says he’d be likely to do it again.

At the other end of the spectrum, given America’s famously bizarre sex-crime laws, we get someone like James Turner, an androgynous film-studies student with a late-‘80s New Wave haircut who almost certainly isn’t a sexual predator at all. He might be overly narcissistic or somewhat childish or just way too dumb for someone with a fancy education. He answered an online sex ad from someone who claimed to be an adult woman looking to hook up, and who then suggested she bring her 14-year-old daughter along so Turner could have sex with her too. This was in Florida, admittedly, where no form of depravity can be viewed as inherently implausible. Still, the fact that Turner didn’t smell an obvious law-enforcement trap suggests that something is wrong with him. Whether that something demanded he spend a year in prison and then spend the rest of his life as a registered sex offender is debatable.

As Sweeney, the bearlike counselor with a sort of Zen-Deadhead implacability, puts it, the question of whether the men at FJT — and one woman, believe it or not — deserve to be punished and exiled for what they have done is not the point. Even the ones who try to shuffle around questions of guilt and innocence a little too much, or who dwell too extensively on their own troubled and abusive family backgrounds, agree they made specific choices (really bad ones) that got them here. Sweeney began by treating the victims of sexual abuse and assault, and discovered that in most cases they wanted some form of healing and reconciliation with their abusers, whereas the state treated the whole affair as closed once the offender had been removed from the situation and incarcerated.

Providing sex offenders with the tools to alter their thinking and control their behavior, Sweeney believes, is the only way to enable any kind of healing in the families they have damaged, and the best way to break the cycle and prevent further generations of abuse. That sounds dangerously idealistic to many people in 21st-century America, no doubt, where crime rates have been reduced to historic lows through an ingenious combination of unprecedented surveillance, mass incarceration and consumer narcosis. But when you encounter the badly broken human beings of FJT, who will spend the rest of their lives in an internal gulag of bad jobs, poor education and zero expectations, it’s impossible not to wonder whether the long-term costs of America’s criminal justice system are even remotely worth it.

Patrick Naughton will tell you that he should never be allowed anywhere near little girls again, under any circumstances. If he can live out the rest of his life in group environments like Pervert Park without harming anyone, that’s a good outcome. But the story of Tracy Hutchinson, the only female resident at FJT, will pretty much rip your heart out and stomp on it. An attractive, almost matronly woman of indeterminate age who is now attending community college, Hutchinson will first attract your sympathy — what in the world is this nice lady doing in this place? — and then your outrage, and then both at once.

Don’t get me wrong: All the stories in “Pervert Park” tell us something, even the scary ones like Naughton’s, and the seemingly haphazard rhythm of the film builds to a tremendous payoff. But perhaps because Hutchinson seems so unlikely, her story expresses the insidious, contagious power of sexual abuse in families more poignantly than any social-science treatise could ever do. After enduring a long-term incestuous relationship with her father (whom she says she still loves) and other horrific forms of abuse, Hutchinson says she became compulsively promiscuous and had an abortion at age 11. After years of bad relationships, booze and drugs, she was eventually lured by a boyfriend into committing a sex crime so lurid and gothic you might not believe me if I spelled it out here. See the movie and you’ll believe it, and believe in her: She understands clearly that she is both an abuser and a victim; she knows she deserved to be punished. She also believes she deserves a chance to make something of her life, and to begin to make amends for the damage she has done. Until we take both halves of that equation seriously, we haven’t begun to address the question of why sexual abuse is so common, and how it can be stopped.

"Pervert Park" premieres this week at the Made in NY Media Center in Brooklyn, N.Y., with other engagements to follow. It will air nationwide on PBS July 11, in the documentary series "POV."