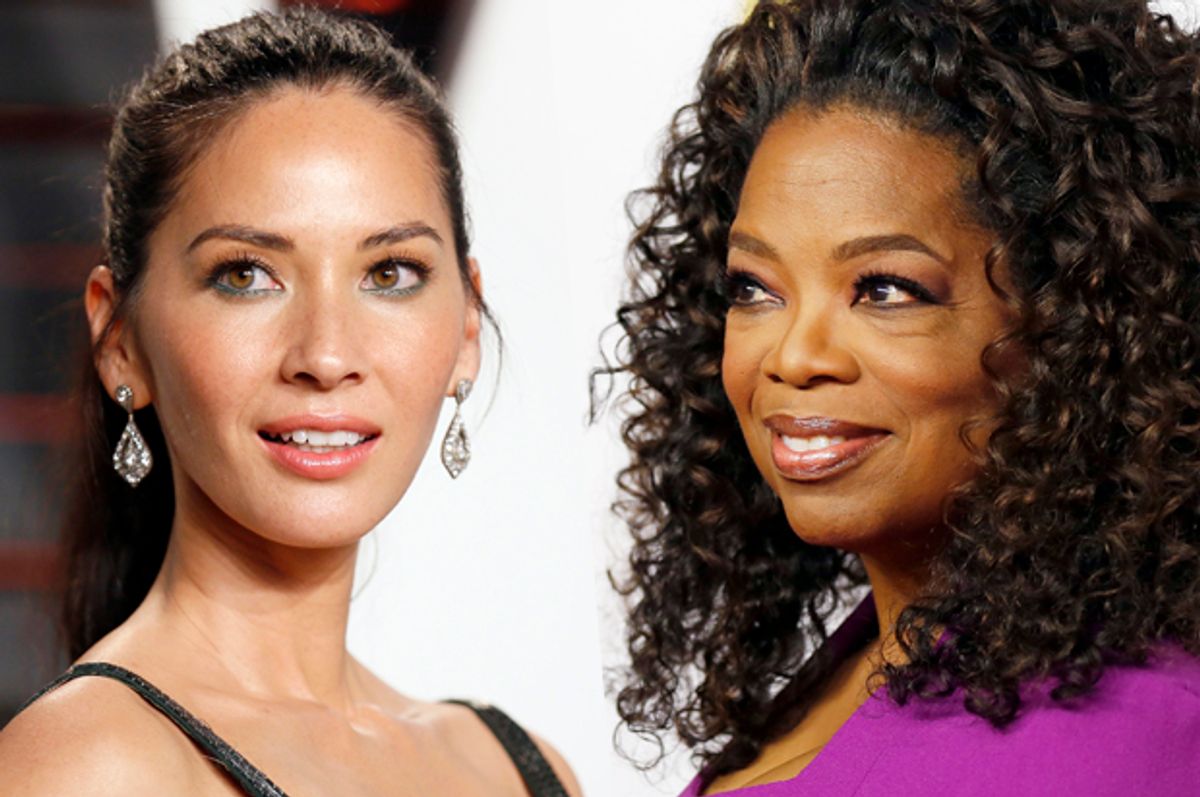 If you're a female celebrity, there are a few things you can count on being asked again and again and again for the duration of your career. You will field questions about your baby making process. You will be expected, from roughly the age of 16 onward, to be aspiring to and planning a "dream wedding." And you will, obviously, be a valued authority on diet and exercise advice. My question is — do we really need Oprah Winfrey and Olivia Munn to tell us how to eat?

This week in Women's Health, actress Olivia Munn revealed how she changed her body for "X-Men: The Apocalypse," and what she calls her "fit and healthy" recent 12 pound weight loss. Earlier this year, tabloids expressed concern she was growing "scary skinny" after she showed off her leaner physique on the red carpet. Speaking with Women's Health, Munn revealed that she has a black belt in tae kwondo, but that more recently "It’s a big difference because I started working out every single day, and then I also started getting into eating 20-80, where 80 percent of your diet is fruits and vegetables and 20 percent is whatever."

Munn does not elaborate on what "whatever" constitutes, though I hope it's not just water. But in an editorial moment of self-awareness, Women's Health actually links from Munn's declaration to a previous story it ran on the 80:10:10 diet movement, "a vegan eating plan in which 80 percent of the calories come carbs (mostly fruit and some veggies), 10 percent come from healthy fats, and the rest come from protein." And that feature warns that "Because most produce is low in calories, you have to eat A LOT of it to get the calories you need…. most people need more than 10 percent of their calories from fat and protein to feel satisfied and get the nutrients they need… You need protein to build and repair cells and muscles, as well as to produce the brain chemicals that make you feel happy, focused, and energized." So it seems a little weird for the magazine to put Munn on its cover flaunting her "Flat abs!", with her message that "A lot of times, people want to hoard their secrets to themselves. But whenever I learn things now...I want to tell anyone who wants to listen about them." When it's a "secret" that your own magazine warns its readers about, one that sounds potentially disordered and dangerous, is that really such a hot idea?

Yet even when the celebrity message is more moderate, it still often comes wrapped in weird headlines. This week bread aficionado Oprah Winfrey was out and about yet again promoting Weight Watchers -- the weight loss company she took a 10% stake in last year. Since starting on Weight Watchers, Winfrey says she's lost 26 pounds — and that she's now "on a diet that I’m never going to go off of again." But because she actually admits she's flexible about her habits and will sometimes have "a couple of spoonfuls and not the whole bowl" of something not on her points plan, "because tomorrow is another day," outlets like US were eager to report that Winfrey "cheats" on her diet.

If Olivia Munn is happy with her eating and fitness plan, that's her business -- but it's odd to set her routine as an aspirational ideal when it's clearly not healthy or realistic for most people. And if Oprah Winfrey, after decades of public struggles with her weight and body image, has something that's sensible for her and lets her have General Tso's chicken now and then, that doesn't need to be reported on to make it seem like she's a dietary criminal. Our relationship with food shouldn't be couched in terms of virtue or sin, where eating as little as possible is viewed as achievement to celebrated on magazine covers, while nibbling a few bites of macaroni and cheese is a temporary fall from grace.