Worst personal essay ever? xoJane scrapes the bottom of the hate-read barrel 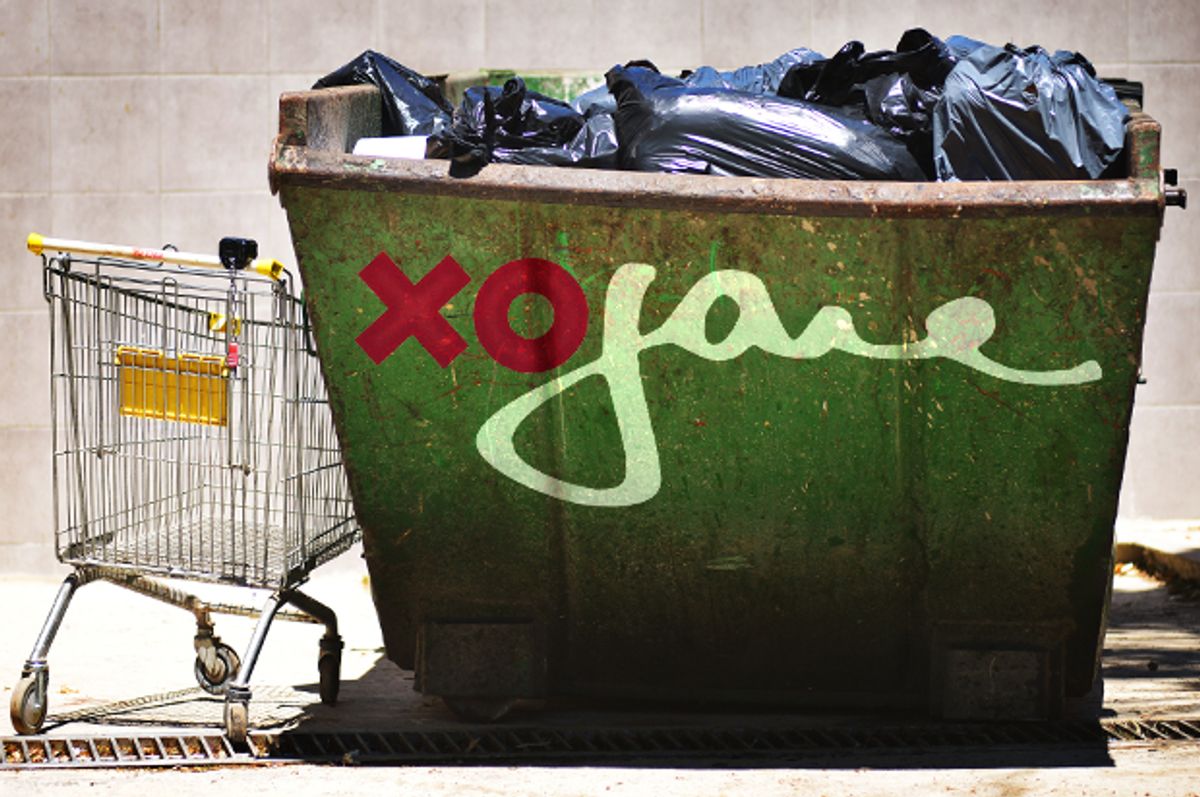 It's no secret that xoJane is the very bottom of the Internet Confessional with a Shabby Veneer of Legitimacy barrel. So when I say this is likely the worst, most irresponsible thing they've ever published, understand that the competition is fierce. But with a title like "My Former Friend's Death Was a Blessing," you can also see how it sails to the top spot.

The story, published on Thursday, tells the tale of a "former friend" the author calls Leah who drowned in her bathtub. "Is it ever okay to admit you feel it is a blessing when someone dies young?" she ponders. Since you asked — almost never, and certainly not under circumstances described in this flaming pile of garbage.

The author preemptively forgives herself for what's to come by saying, "It's hard to share my thoughts and tell Leah's story — or at least her story from my perspective — and not judge myself on some level for exploiting an awful situation." Don't worry, she powers through. She describes a friend she first met in high school, a young woman of talent and promise, but, according to the author, who "just stopped evolving after high school. Her apartment was always filthy and her bedroom had clothing strewn about everywhere. She didn't take pride in her home or respect her own property." The woman also failed to "have real boyfriends or go out on dates" and "didn't have to work because her parents gave her whatever she wanted." The friendship ended, but a few years later, a mutual friend "sent me a screenshot which made me curious in a total Mean Girls kind of way." The writer's admitted "voyeurism" led her to discover her former friend happened to be, in addition to making "strange grammatical errors" and "putting unnecessary negative energy into my life," "seeing doctors, [taking] specific meds, and being diagnosed with schizoaffective disorder."

Soon after, she says, she learned the woman "supposedly hit her head" in the tub and drowned, but opines, "I really believe knowing who Leah used to be, that she would have wanted to die that way. Big and dramatic with an obit in the New York Times…. It sounds horrible to say, but her death wasn't a tragedy, her life was." AND OH MY GOD STOP TALKING.

The writer goes on to say, I'm not kidding, that while "I don't think the prognosis for all people diagnosed with severe mental illness is death… This girl had nothing to live for… What would the rest of her life been like? She would have either been institutionalized or a major burden on her family." But hey, it's okay because maybe now she's somewhere "happy, free and well."

Sure, coming from the same editors who this week thought it was cool to publish a piece declaring that straight male gynecologists are "getting paid to grope women" it's not exactly a shock that xoJane has once again declared itself the literal worst. But this piece has a particularly toxic stench — the kind you can easily imagine someone emotionally vulnerable reading and acting on. And for the site to publish during Mental Health Awareness Month feels like an especially cruel slap in the face.

Writing for Medium Friday, Melissa McEwen posted an open letter to xoJane from herself and several other past contributors urging the editors to "take down the essay, which will minimize additional harm to readers struggling with mental health issues personally and among people they love" and vowing not to write for the site again. On Friday, xoJane did indeed remove the story and issue a tepid apology, saying, "I deeply regret the hurt that this article has caused and understand that it has perpetuated stigma and diminished the lives of people with mental illness. I am committed to immediately reviewing our vetting process to ensure that this experience has a positive influence on the ways in which we at xoJane present all women going forward." I'm sorry, I honestly don't know what kind of "vetting process" one already has in place to not immediately delete a horror show of a submission like this.

The story, by the way, originally ran with a byline that was later quietly withdrawn and replaced with a simple "anonymous." The writer is not hard to track down though, along with her previous stories acknowledging she's "someone who was addicted to Adderall for the better part of my life," who says that "starting at the age of eight, doctors gave me Ritalin, Adderall and every other available form of legal speed available." You might think a person who'd endured something like that with her own brain chemistry might have had compassion for someone else, someone who isn't around any more. You'd clearly be mistaken. This is a woman who a few years ago wrote a story about how she wasn't willing to "settle," and followed it with a later xoJane story crowing, "I’m engaged, bitches! And I didn’t have to settle for anything less than what I wanted. That’s right, I win!"

And if you're wondering how she's holding up now in the face of a justifiable torrent of fury about her latest story, well, she went on Good Morning America Friday to talk about how she's staying "hot" for her spouse and giving her husband "the gift of the best possible wife."

That this terrible excuse for a writer would wish to vomit out a justification of the relief she felt when an apparently seriously mentally ill former schoolmate died is puzzling enough. That whomever is pushing the buttons on xoJane decided to run it and pay the princely sum of fifty bucks for it is where this becomes truly unconscionable. But that's the nature of xoJane, as Mandy Stadtmiller laid out in last year's soul-baring, explosive feature on her time as an editor there. In it, she described herself as a "former first-person human trafficker" who knows "The first-personalization trend of online writing has done far more good than harm" and admitted, "I’ve seen more than one writer delete their social presence entirely after writing for me."

I've known many people who've struggled mightily with a variety of mental health issues — some of them genuinely life threatening. They are not "burdens," they're human beings. Human beings like an old friend — a funny, whipsmart and tenderhearted woman — who a few years ago committed suicide. I knew how hard she tried to stay alive, the hospitalizations and the medications and the years of therapy. I knew how badly she wanted to have a normal life. And I admit there have been moments since when I've hoped, for her sake, that in her final act she had a measure of peace and relief. But I also know the terrible void she left behind, and the grief her family and friends still endure. To call any experience like that a "blessing" and to collect fifty dollars to say so, one would have to supremely callous and profoundly clueless. One would have to meet the criteria for writing for xoJane.