Anthony Weiner's downfall and Donald Trump's rise: Everything that's bad and stupid about politics in one lesson

Stupidest country ever: The liberal destroyed by sexting vs. the billionaire lecher who could be president 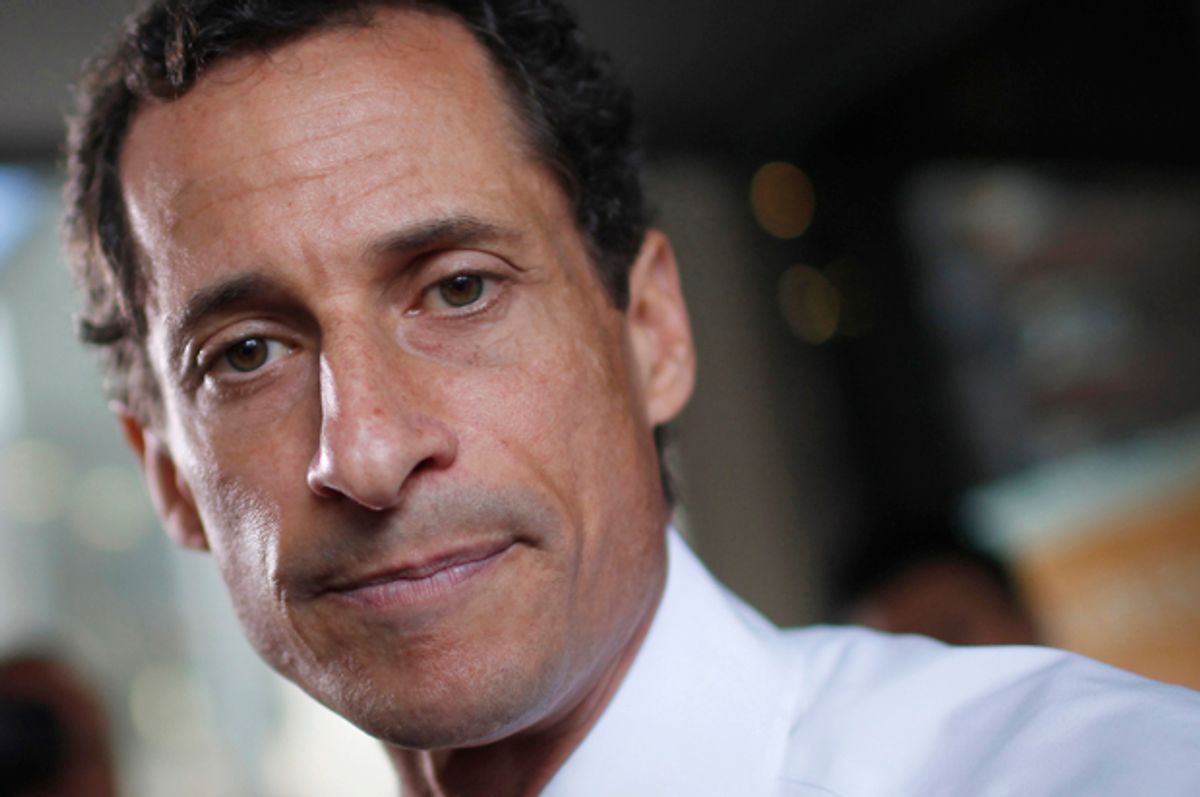 Do the “superficial and transactional” nature of his political relationships make it difficult for him to connect with real people in his personal life, Anthony Weiner wonders aloud? Or is it the other way around: Was he drawn to politics in the first place because he has some kind of narcissistic personality disorder that demands constant attention? And did the very technology that ended his political career — what we now call “social media” — empower him in the first place?

The answer to the second question is clearly yes. Social media created Anthony Weiner, or allowed him to create himself, at least as a national political phenomenon, and then it paved the way for his downfall. As for that pair of opening questions, they comprise a feedback loop that captures so many central issues in contemporary society and culture and politics I can’t hope to express them all, and that reach far beyond the story of one arrogant, ambitious congressman and his boxer briefs.

Weiner became a national hero to liberals for the angry, excoriating speeches he delivered in the House of Representatives, repeatedly accusing Republican lawmakers of cowardice and hypocrisy during a time when most elected Democrats were cowering in fear, their undies knotted in a collective bundle. (A time that has continued, virtually unabated, from at least the mid-’90s to the present day.) Then, of course, he became a national punch line, with a ridiculous homonym for a last name. Weiner was forced to resign his seat in Congress after admitting he had exchanged racy photos and text messages with a bunch of women he didn’t even know. This required an especially farcical media scandal that featured Wolf Blitzer showing Weiner a photograph and demanding, “Wouldn’t you know if those are your underpants?” (What Blitzer really meant, to borrow the language of his and Weiner’s ancestors, was “Wouldn’t you know if that was your shvantz?”)

Why revisit the strange, sad, bitter and resonant saga of Anthony Weiner now, in the year of Donald Trump? Oh, there are reasons, all right, and if you see Josh Kriegman and Elyse Steinberg’s mesmerizing documentary “Weiner,” which follows the disgraced congressman through his doomed comeback attempt in the 2013 New York mayoral campaign, you’ll see what they are. I just don’t know if I can put them into words. On one level, “Weiner” is about everything that’s wrong with electoral politics, and everything that’s wrong with the people who go into it, with their eyes more or less open. It might also be about what’s wrong with us, and why we seem to be a nation of easily distracted and not particularly bright children who find more meaning in second-rate melodrama than substantive discussion.

It’s also, as Weiner himself keeps protesting throughout the film, about the hypocrisy and mendacity of the political media, which follows the same script of bogus moral outrage and shameless titillation every time a male politician is caught with his pants down. (Not quite a metaphor, in Weiner’s case.) Has any female politician ever been implicated in a sex scandal? And won’t that be interesting, when it happens? But one of the things about Anthony Weiner that makes him a compelling character is that, like his fellow sex-scandal New York Jewish Democrat Eliot Spitzer (who is never mentioned in “Weiner,” curiously enough), he’s too intelligent and self-aware for his own good — but not quite smart enough to avoid self-destructive behavior in the first place. It takes balls, so to speak, for a guy who sent pictures of his dick to a Las Vegas casino dealer he met on the Internet to complain that the media fails to appreciate nuance. At one point during his postmortem sit-down with Kriegman and Steinberg, Weiner stops himself and shrugs: “I mean, I did do the thing.”

Right, he did. But what was “the thing,” exactly? And why did it matter? And why should a congressman’s private conduct, irresponsible and idiotic as it may have been, disqualify him from holding office more completely than the nine million things that ought to have disqualified Donald Trump, but apparently haven’t? I get why the Weiner comeback saga of 2013, which Kriegman and Steinberg chronicle in wildly entertaining, slow-motion car-crash fashion, had New York hypnotized, and to some extent the whole country too. Weiner was an eloquent liberal hothead, loved in some quarters and despised in others, who did great TV and clearly relished political battle.

Even as Weiner’s mayoral campaign sinks into the mire of further “sexting” revelations — some of them involving episodes after his resignation from Congress and the supposed rehabilitation of his marriage — and most viewers of “Weiner” will feel justifiably queasy about his limitless duplicity, Weiner has some of his finest moments. He goes on MSNBC and thoroughly destroys the sanctimonious Lawrence O’Donnell, who keeps asking Weiner what’s wrong with him. “Repeating that over and over doesn’t make it more interesting, Lawrence,” Weiner retorts. “What’s wrong with you that you want to be on television every day, lecturing people?” (To O’Donnell’s credit, he admits that’s a good question.)

In the last great viral video of Weiner’s political career (although one should never say never!), he gets into a shouting match in a Brooklyn bakery with an Orthodox Jewish man who calls him a “scumbag.” Weiner gets right in the guy’s face, pointing skyward: “Why do you get to judge me? Do you know who gets to judge me? Talk to your rabbi about that.” His opponent, so confident of the moral high ground, gets increasingly rattled and then blows it completely just as Weiner is walking away by muttering, “Married to an Arab.”

Yeah, that’s another factor at work here: L’affaire Weiner was packed with more cultural and political baggage than it could possibly contain. Weiner’s beautiful, glamorous and highly accomplished wife, Huma Abedin, is not in fact an Arab. But she is a Muslim (of Indian and Pakistani parentage) and as every Benghazi conspiracy theorist can tell you, is also a longtime aide and close confidant of Hillary Clinton. Abedin began working for Clinton in 1996 at the White House, was her deputy chief of staff at the State Department and now serves as vice chair of Clinton’s 2016 presidential campaign. One of the most striking subplots of “Weiner” is the complex negotiation between these powerful spouses, and the process by which Abedin gradually disengages from her husband’s mayoral campaign, allowing him to drown alone. (They remain married, but the rumors that Clinton told Abedin she had to decide where her primary loyalty lay are altogether plausible.)

I don’t question the reasons why New York voters turned away from Weiner en masse in that Waterloo mayoral campaign: He went from leading in the polls, six weeks before the election, to finishing fifth in what was essentially a five-person race, with less than 5 percent of the vote. In an early scene of “Weiner,” we see Bill de Blasio, who then held the obscure citywide post of public advocate, leading a tiny contingent at a street parade where Weiner was the star attraction. De Blasio probably isn’t as bright as Weiner, and definitely isn’t as colorful, but today he’s the crusading liberal mayor that Weiner hoped to be, with a decent chance of being re-elected next year.

Weiner was revealed as someone who had deceived his wife and the public and then did it again, after claiming to have reformed. That suggested either that he was a deceptive and dishonest person or that, as he himself puts it, he possessed “an unlimited ability to fuck things up.” (That comes late on election night as he watches himself on television, giving the middle finger through his limousine window to pursuing paparazzi.) Those are understood as liabilities in politics and other areas of human endeavor, and the somewhat plodding de Blasio, whose family story was equally unexpected but far more wholesome — his accomplished and charismatic wife is African-American, and previously identified as a lesbian — made a refreshing contrast.

That all makes sense. Like a lot of other New Yorkers, I thought about voting for Weiner in that race because he was talking about all the right things, but then decided he seemed slightly too icky. But I say again: How did we get from the downfall and disgrace of Anthony Weiner in 2013 to Donald Trump being a few lucky breaks or weird accidents away from the White House in 2016? Trump’s level of mendacity and misogyny and shady business dealings and personal debauchery (if you care about that stuff) go light years beyond anything Weiner ever dreamed about. Why do the supposed moral standards that turned one of them into a national laughingstock have no effect on the other?

There’s a simple answer, but it doesn’t amount to an explanation: Democrats in New York turned away from Weiner because of his lewd and mendacious conduct; Republicans across the country were drawn to Trump by those things, or at any rate by the entire Trumpian package that included them. (Does anyone believe that a Weiner-esque sexting scandal would damage Trump? Or that his electorate would even notice?) But this isn’t just about the difference between the two parties and their demographics, although that certainly plays a role.

It’s about the way we view liberal reformers like Weiner, who are perceived as high-minded preachers or schoolmarms delivering moral sermons from on high, versus a despot or populist like Trump, who is seen as expressing or embodying the popular will and the popular appetites. That's idiotic, of course, because the whole thing is idiotic. Weiner was running for mayor of New York City, not Husband of the Year. But the point is that if Trump likes leggy, Victoria’s Secret-type women and enormous steaks, and has atrocious taste in décor, he stands for millions who share those desires. I guarantee that he and Melania don’t stand around in the kitchen comparing the saturated-fat content of jars of pasta sauce, as Weiner and Abedin do in this documentary.

It’s about the overwhelmingly anti-intellectual and anti-elitist tone of American culture, which the supposedly liberal mainstream media (itself largely composed of privileged coastal elites with expensive educations) falls all over itself to nourish. Those tendencies are a double-edged sword, and I’m not pulling some David Brooks nostalgia act here and claiming that things were better when wise men in Georgetown made all the decisions. Anthony Weiner created a trap for himself and fell into it, knowing full well it was a trap. To use his expression, he did the thing, and has no right to complain that he was vilified for doing it.

But Weiner was punished and shamed, I would argue, for other reasons: Because he was too smart, too ambitious, too arrogant and, yeah, maybe a little bit too Jewish. Donald Trump has done things 20 times worse, a hundred times worse, that we’ll never even know about. Almost as important, Trump has none of the capacity for self-reflection that Weiner displays in this film, no desire to learn anything from painful experience and no belief there is anything worth learning. Trump is immune to all punishment, and incapable of shame. He is our punishment for being such a goddamn stupid country. If Weiner deserved what happened to him, then we deserve this.

"Weiner" is now playing in Los Angeles and New York, with other cities and home video to follow.