Lessons from "All the Way": 3 big take-aways from LBJ's victories that progressives can't afford to ignore 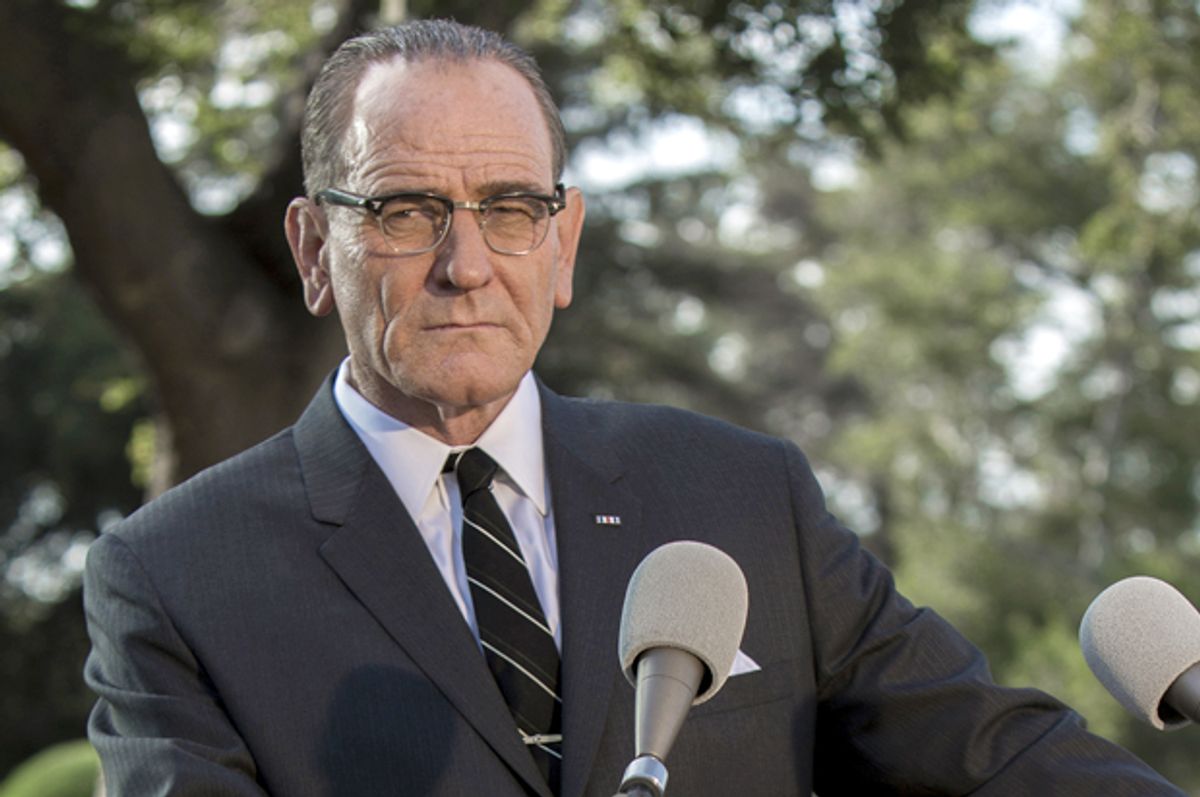 Bryan Cranston as Lyndon B. Johnson in "All the Way" (HBO)
--

When HBO announced in 2014 that it was going to release a cinematic adaptation of “All the Way,” Robert Schenkkan’s Tony Award-winning play about President Lyndon Johnson’s successful mission to pass the Civil Rights Act of 1964, it’s unlikely they knew how prescient their film would be. The politics of the 1964 election are uncannily similar to those of 2016: Like Hillary Clinton today, Johnson was deeply distrusted by liberals due to his widespread identification with “the establishment” (financial as well as political) and image as a consummate politician who lacked core principles. Meanwhile his Republican opponent, Barry Goldwater, had seized the GOP nomination in large part by basing his campaign around a racially charged issues (opposing federal civil rights legislation), not dissimilar to Donald Trump’s revolution in the GOP this year.

Yet even though millions of liberals tuned in on Friday night to see Bryan Cranston’s portrayal of LBJ, polls continue to show that our era’s Johnson is in danger of losing to our era’s Goldwater because many progressives — who largely backed Clinton’s rival, Bernie Sanders, for the Democratic nomination — are unwilling to support her in the general election. This is where “All the Way” specifically, and Johnson’s story in general, offers three instructive lessons.

“This ain’t about principles, it’s about votes. That’s the problem with you liberals — you don’t know how to fight! You wanna get something done in the real world, Hubert, you’re gonna have to get your hands wet.”

When Johnson says line this to liberal Senator (and future Vice President) Hubert Humphrey, the “votes” to which he was referring were legislative tallies for or against his civil rights bill. In a broader sense, though, Johnson’s observation speaks to the fact that while many on the left know what to fight for, they forget how to effectively fight for those things. Yes, the Civil Rights Act of 1964 didn’t include provisions banning racial discrimination in voting (that wouldn’t come until the Voting Rights Act of 1965), but it made it illegal to discriminate based on race, color, religion, sex, or ethnicity, and outlawed segregation at schools, workplaces, and public facilities.

As Martin Luther King Jr. later points out to civil rights activists disappointed by the 1964 measure, it isn’t always possible to achieve all of the positive change you need within a democratic society. Compromise, including unfair concessions, is often necessary in order to get things done, and there is nothing sinful about accepting that. Fighting for something doesn’t just mean saying what you want to have done, but using real-world tool to implement those changes.

“This is president is gonna have to deliver… and we’re gonna hold his feet to the fire until he does.”

This line, uttered by King as a way of explaining his movement’s relationship with the new president, speaks to the other side of civic responsibility. While it is necessary to accept compromises when they can advance a more important larger agenda, it is also vital for social justice advocates to stand their ground on the issues that matter most and demand that their politicians be accountable. As the play and film both point out, there had been many presidents before Johnson who had paid lip service to the cause of civil rights for African Americans; for Johnson to politically benefit from his promise to actually do something in the fight against systemic racism, he would need to deliver the goods.

Both of these lessons apply to the challenge facing liberals in the Clinton-Trump election. Like Johnson in 1964, Clinton in 2016 is hampered by her problematic background on racial justice issues, from fueling the mass incarceration of racial minorities to supporting a welfare reform bill that disproportionately impacted African Americans. Also like Johnson, though, Clinton has now vowed to fight for important civil rights measures, including overhauling drug sentencing laws, prohibiting racial profiling, and forbidding employers from asking applicants about their criminal history. If she is elected, the non-white voters who helped put her into office will have a right and responsibility to hold her feet to the fire and make sure she gets these things done… but to do that, of course, she must become president first.

“My first job after college was as a teacher in Cotulla, Texas, in a small Mexican-American school. Few of them could speak English, and I couldn't speak much Spanish. My students were poor and they often came to class without breakfast, hungry. They knew even in their youth the pain of prejudice. They never seemed to know why people disliked them. But they knew it was so, because I saw it in their eyes.”

While “All the Way” does include a few lines from Johnson about his experience teaching Mexican-American children, the real-life president’s actual words (culled here from his speech supporting the Voting Rights Act of 1965) sum up this point perfectly. From a strictly ethical perspective, any election in which one candidate opposes racial injustice and the other supports instantly becomes a cut-and-dried affair. When candidates like Goldwater and Trump advocate hateful policies — from the former’s opposition to civil rights to the latter’s demonization of Mexicans, Muslims, and women — they perpetuate social bigotries that ruin lives. If elected, the Goldwaters and Trumps of America wouldn’t simply harm individuals within these groups by implementing bad policies; by sheer virtue of triumphing at the polls, they would validate discriminatory attitudes as acceptable in our political life.

Perhaps this is the chief lesson that “All the Way,” and by extension the 1964 presidential election, can teach us about the upcoming contest. It may be interesting to study the personalities of figures like Lyndon Johnson and Hillary Clinton and Barry Goldwater and Donald Trump, but beneath the melodrama of the maneuvering for power, there are millions of ordinary human beings who depend on the right outcome. If the liberals of 2016 decide that “sticking to principle” requires them to risk the election of an outspoken racist over an imperfect candidate who at least promises to do some real good, we will effectively place our ideological pride over the literal well-being of those who are most vulnerable in our modern society. That may feel good when you’re standing on your laurels, but in terms of real-world consequences, it is a very illiberal thing to do. This is the point that “All the Way” makes so beautifully… and not a moment too soon.