Bernie says bail out Puerto Rico: Sanders details how the feds should rescue the territory as they did big banks 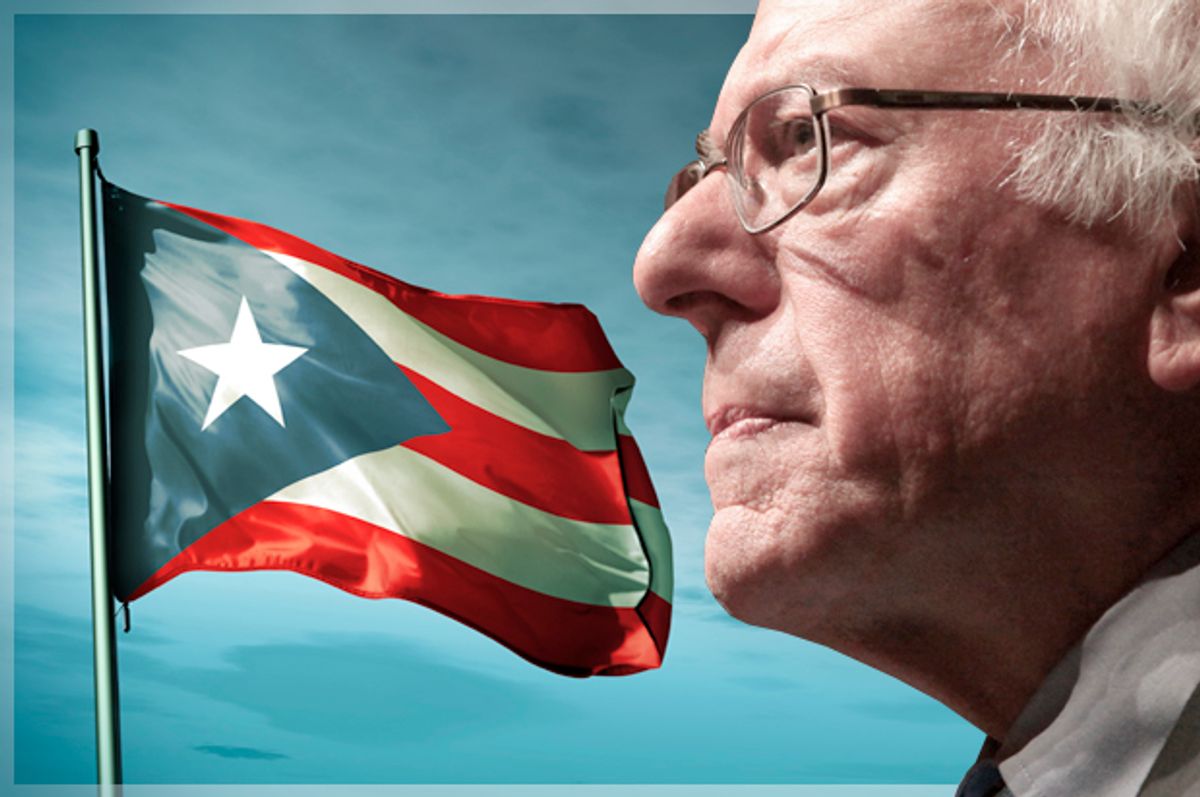 Recently introduced bipartisan legislation to deal with Puerto Rico’s fiscal crisis would “make a terrible situation even worse,” according to Sen. Bernie Sanders, who is urging his Democratic colleagues in the Senate to reject it. The presidential candidate believes that instead, the Federal Reserve should act within their authority to alleviate the situation.

Sanders sees a double standard at the central bank in how they handle crises. “The Federal Reserve must be just as creative in finding solutions to help the 3.5 million American citizens in Puerto Rico as it was in rescuing the largest financial institutions in this country and throughout the world in 2008,” Sanders told Salon in a statement.

This is obviously not the first time that Sanders has separated himself from the political establishment. But it marks one of the first legislative battles since Sanders acquired newfound national stature from the presidential campaign. It also amplifies his critiques about the financial industry, and the lack of attention Washington pays to the struggles of ordinary people.

Puerto Rico has been reeling from a decade of recession, and successive governments papered over those problems with excessive borrowing. Last year, Gov.  Alejandro García Padilla called Puerto Rico’s debt, around $73 billion, “not payable.” The island has already defaulted on small debt payments three times, and engaged in grinding austerity to manage the rest. Hundreds of thousands have left as poverty and unemployment skyrockets. Defaulting on a July 1 debt payment of $1.9 billion would further devastate the island.

Territories like Puerto Rico cannot use U.S. bankruptcy laws, and the island cannot seek help from the IMF or the World Bank as a sovereign country might. Puerto Rico’s creditors – mostly mutual funds and “vulture” hedge funds that scooped up debt at a massive discount (as low as 29 cents on the dollar) in search of a payday – have little incentive to make a deal because the laws work so completely in their favor.

After months of inaction, House negotiators released the Puerto Rico Oversight, Management, and Economic Stability Act (PROMESA) after bipartisan talks. PROMESA would institute a seven-member fiscal oversight board, the majority of whom would be selected by Congressional leaders Paul Ryan and Mitch McConnell. Puerto Ricans have no say in the board; members must have bond market and financial experience but cannot be a current or former elected official from the island. The oversight board would be able to institute more cuts, supersede local laws, lower the island’s minimum wage, and as a last resort institute a court-approved debt restructuring, as long as it is “in the best interest of creditors.”

It’s hard to see this as anything but a colonization of Puerto Rico. Even supporters of the bill acknowledge that. They see it as the only opportunity for Puerto Rico to avoid disaster by obtaining the ability to restructure its debt, given the makeup of this Congress. Hillary Clinton, who expressed “serious concerns” about the plan, nonetheless said Friday, “we must move forward with the legislation.”

This is precisely what Sanders rejects. This artificial constraining of choices, he believes, leads to terrible outcomes. He outlined his alternative, which does not require approval from Congress, in a memo.

Sanders wants the Federal Reserve to issue new loans to Puerto Rico. The island would be contractually obligated to use the proceeds to hold “reverse Dutch Auctions” to force hedge funds and other creditors to sell their debt at a discount. As a result, the Fed would become the primary creditor for Puerto Rico, able to lengthen payment timelines and give the island space to recover economically.

In a reverse Dutch Auction, Puerto Rico would offer to buy back debt from creditors at a low price, incrementally increasing it until finding sellers. This would make the creditors compete with each other to ensure their debt gets sold. Holdouts who refuse to participate in the reverse Dutch Auction, Sanders says, would be at risk of greater discounts on their debt later, though he does not specify how.

Federal Reserve experts have repeatedly argued lending to Puerto Rico is impossible, but Sanders cites two parts of the Federal Reserve Act that would grant the authority. First, under Section 13(3), the Fed could cite “unusual and exigent circumstances” and lend to individuals, partnerships, or corporations that cannot otherwise secure credit. Puerto Rico has several public corporations, which issued about one-third of their overall debt.

13(3) lending has become a bigger challenge now because of changes to the rules under Dodd-Frank. First, the Treasury Secretary must approve any emergency lending. Second, no insolvent firm can receive money, with insolvency broadly defined to include borrowers that failed to pay debts in the past 90 days. This makes the Government Development Bank, which defaulted on $422 million in principal payments on May 1, currently ineligible.

Third, lending is limited to programs with “broad-based eligibility.” It cannot be designed to aid specific corporations, and must allow “at least five entities” to be able to participate. You could maybe get around that by opening the program up to all U.S. territories. Finally, the Fed must institute a penalty rate of interest on these loans, “designed to encourage borrowers to repay emergency credit as quickly as possible.” It’s unclear how that would help Puerto Rico.

Sanders’ other option appears more promising. Section 14(2) allows the Fed to purchase “bonds and notes of the United States” with a maturity date of six months. Though Puerto Rico is not a state, it is considered part of the Second Federal Reserve District based in New York. According to a paper by Arturo Estrella, an economics professor at Rensselaer Polytechnic Institute, most Federal Reserve regulations treat Puerto Rico like a state, meaning the Fed could purchase the island’s debt short-term. After the six-month maturity, Puerto Rico could roll over the debt repeatedly until they can pay it down once the economy recovers.

There are other alternatives. The Fed could capitalize a separate corporation, similar to the New Deal-era Reconstruction Finance Corporation, to provide financial support to Puerto Rico. Congress could await the results of an active Supreme Court case that would allow Puerto Rico to use a local law to restructure its public corporation debt. They could investigate whether Puerto Rican debt was unconstitutionally issued, as an audit committee on the island is now doing.

The larger point Sanders makes is this: “when there’s a will, there’s a way.” The Fed and the Treasury Department moved heaven and earth in 2008, lending to dozens of non-bank corporations and opening up numerous credit facilities to bail out Wall Street. At that time they interpreted their powers broadly, with relentless imagination to massaging the rules. If they can do that, Sanders tells Salon, they can “facilitate an orderly debt restructuring to alleviate the humanitarian crisis in Puerto Rico.”

There are implications to that. The new 13(3) rules were imposed under Dodd-Frank because of concern that the Fed was playing too fast and loose with its authority. And if the rules are bent to accommodate Puerto Rico, you can bet they will be pried open in the next financial crisis.

But Sanders obviously puts the people of Puerto Rico above those concerns. And he’s not wrong about the level to which the Fed and the Treasury did handstands to get help to Wall Street, without exhibiting the same urgency for others. If there are legitimate alternatives to an unelected shadow government imposing its will on Puerto Rico, they should be taken. As Sanders puts it, “We must stop treating Puerto Rico like a colony and start treating the American citizens of Puerto Rico with the respect and dignity that they deserve.”