GOP's poverty proposal: What to expect in the first of Paul Ryan's big policy initiatives 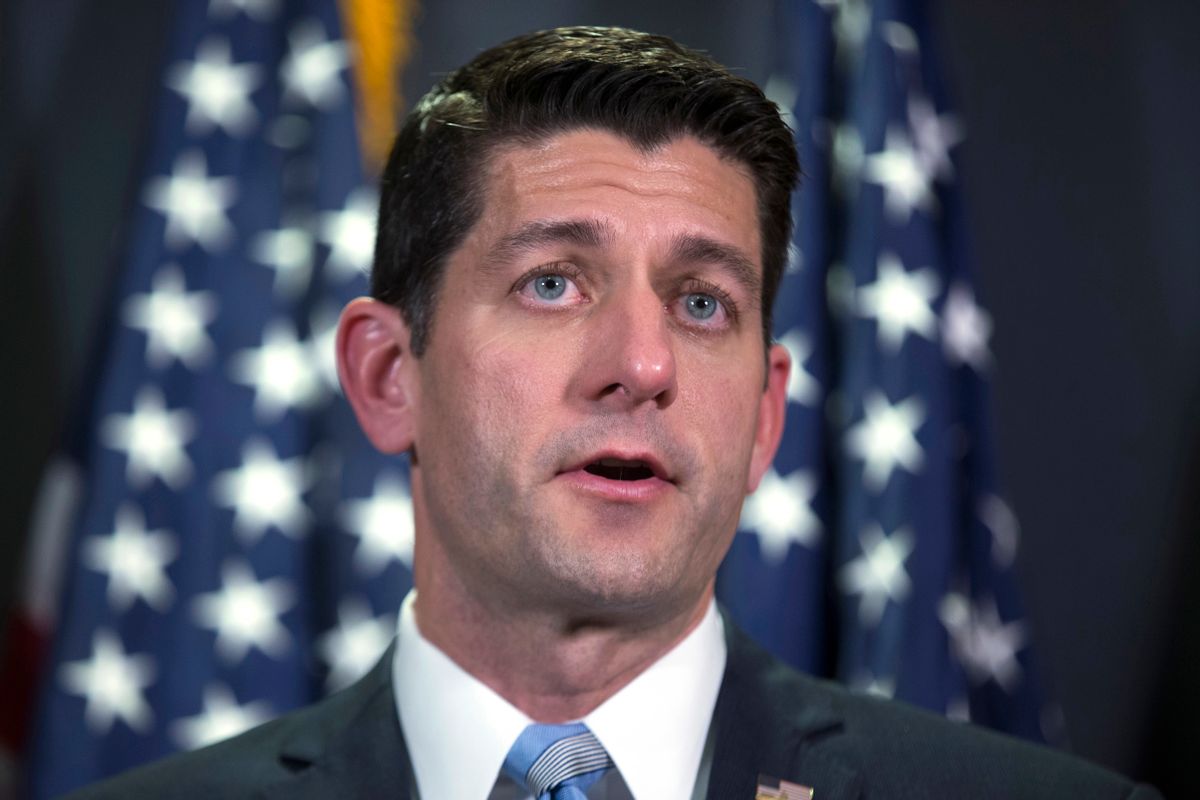 FILE - In this Tuesday, April 19, 2016, file photo, House Speaker Paul Ryan, of Wisconsin, speaks during a news conference at the Republican National Committee headquarters in Washington. Ryan said Monday, May 9, 2016, that he'd step down as co-chairman of the Republican National Convention if presumptive presidential nominee Donald Trump asked him to. (AP Photo/Evan Vucci, File) (AP)
--

All the news about Paul Ryan these days centers on the state of his relationship with the Republican Party’s presumptive presidential nominee, but the speaker is also apparently getting ready to churn out some new policy recommendations for the House Republican Caucus. As The New York Times reported, Ryan and the House GOP are going to start churning out one new policy proposal a week after the Memorial Day holiday, and the first product to roll off the line “will focus on combatting poverty.”

That’s no real surprise, given that Ryan has spent his post-2012 career reinventing himself as a conservative poverty warrior of sorts. And though we don’t yet know for sure what will be in the proposal he and the relevant committee chairs have cooked up, it feels like a safe bet to assume that the new Republican anti-poverty measure will propose some steep cuts to social spending, and that it will likely get there through block grants.

The standard prescription that Ryan and other House conservatives have advocated for “reforming” federal anti-poverty programs has been to lump the funding for those programs into discrete chunks that will then be sent to the states to do with as they please. This process has long been known as “block granting,” but somewhere along the way the GOP decided that it needed a happier, more marketable term for this process, so they started experimenting with ways to rebrand the block grant.

Ryan’s own anti-poverty plan rechristened block grants as “Opportunity Grants,” because everyone loves “opportunity.” The House GOP’s 2015 budget proposal took the renaming process a step further, proposing to transform federal funding for the Supplemental Nutrition Assistance Program (SNAP) into a “State Flexibility Fund,” because people also like “flexibility.” The House poverty task force’s mission statement embraced this sort of euphemistic language, declaring its intention to “increase flexibility to state and local governments to promote new ways to help those in need and foster seamless cooperation across assistance programs.” That’s just a politically palatable way of saying “we’re going to block-grant the hell out of everything.”

What that means, in practical terms, is cuts to anti-poverty programs that reduce their overall effectiveness. The Center on Budget and Policy Priorities has been hot on the case when it comes to block grants and the safety net, and they’ve made the case that such policies will effectively hollow out programs that are desperately needed to help keep people out of poverty. CBPP ran the numbers on Ryan’s 2014 budget proposal, which called for block-granting both Medicaid and SNAP, and found that it would have cut those programs by nearly $1 trillion combined over 10 years. Block grants “work as a stealth tactic to cut spending,” writes economist Jared Bernstein, and economic analyses from CBPP have shown that when you block-grant a social program it almost always falls victim to erosions in funding. “The most predictable result of merging social programs into broad block grants is substantial erosion in funding over time,” CBPP writes, “with negative consequences for efforts to assist people in need.”

Also, while block-granting is sold as a “flexibility” measure, it actually tends to restrict the degree to which states can respond to economic downturns – precisely the moments when anti-poverty programs are needed most. In the past, block-granting poverty programs has also given states the “flexibility” to change eligibility requirements, kick needy people off programs, and divert the money towards other priorities. That’s what happened with the Temporary Assistance for Needy Families program, a block-granted anti-poverty measure that arose out of the 1996 “welfare reform” push and has become effectively useless in states like Arizona.

We still have to wait to see precisely what the GOP has in mind, but the politics of the thing are guaranteed to be problematic for Ryan and his buddies. Cuts to the safety net – either directly or through stealth measures – aren’t going to be accepted by Democrats, who will respond by arguing (with a good deal of justification) that Republicans are hollowing out social programs to free up money for tax cuts and increased military spending. “Welfare reform” doesn’t have the same support it once had among Democrats, and the party has in the past had a decent amount of success attacking Ryan’s budget documents as callous assaults on the poorest and neediest Americans.

But the House GOP’s poverty push should, at least, have an ally in Donald Trump. The Republican presidential candidate has already recommended block-granting Medicaid, he supports adding work requirements to various forms of government assistance, and he generally exudes an attitude of disdain for anyone who isn’t wealthy. He’s probably not the sort of ally Paul Ryan is looking for, but at least for once Ryan and Trump will be on the same page.