The U.S.'s shameful silence on Brazil: The insane hypocrisy of the right-wing coup can't be exaggerated or ignored 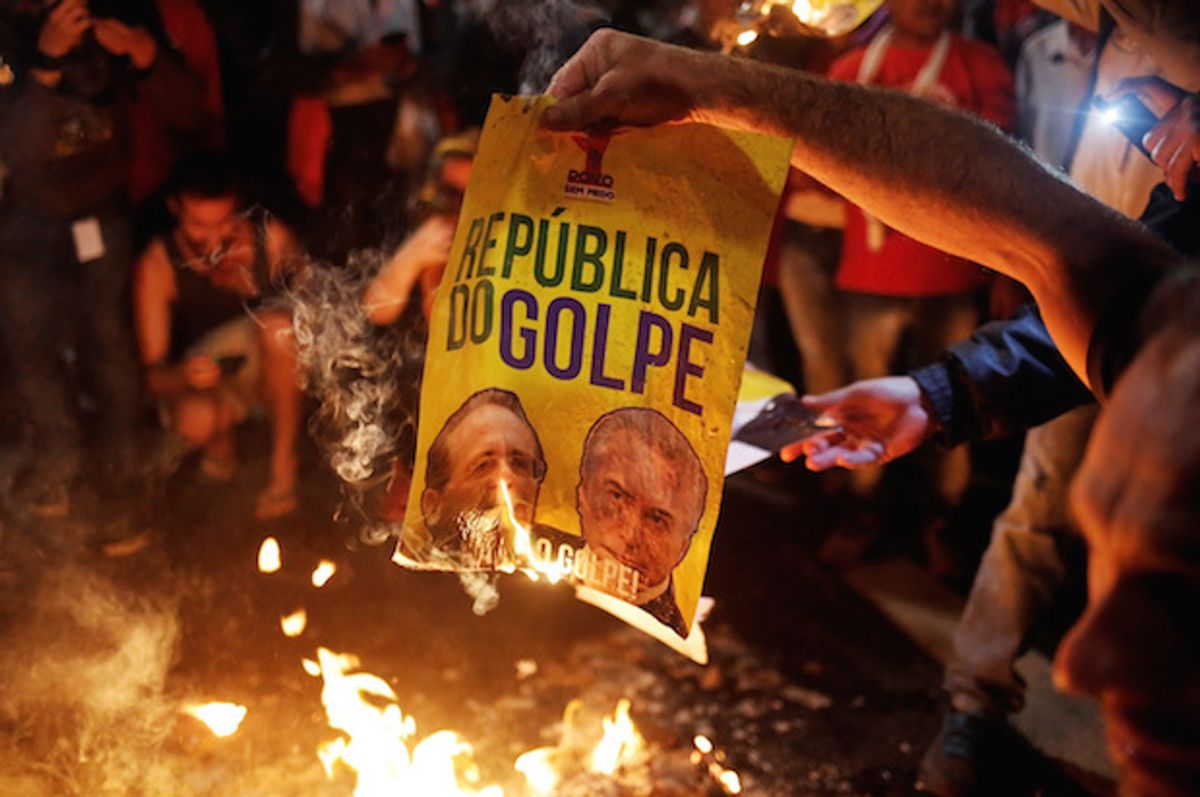 Brazilian activists burn a poster reading "Republic of the Coup," with the images of Senate President Renan Calheiros (L) and right-wing interim President Michel Temer, at a protest in Sao Paulo, Brazil on May 12, 2016 (Reuters/Nacho Doce)
--

The absurd political developments unfolding in Brazil sound like they were directly lifted from an outlandish Hollywood film.

A slow-motion coup is presently being carried out in the fifth-most populated country, and the layers of hypocrisy pile on and on like an onion.

The latest development: the anticorruption minister in Brazil's new coup regime was forced to resign on Monday after a leaked secret recording proves he was actively trying to prevent an investigation into actual corruption that he and the coup leadership were involved in.

Yes, that's right, for emphasis: the "minister of transparency" in Brazil's interim government helped carry out a coup on false corruption allegations in order to prevent an investigation into actual corruption he is a part of.

For context, then, here is a brief summary of the ludicrousness going on in Brazil:

Corrupt right-wing politicians, who are presently being investigated for criminal corruption, carried out a congressional coup against the democratically elected left-wing president (Dilma Roussef) — who has never been charged with a crime and who is herself one of the few politicians not implicated in corruption — by pushing for an impeachment trial based on trumped-up allegations of fiscal mismanagement — a non-impeachable, non-criminal offense.

After taking over the democratically elected government, this right-wing coup regime promptly created a business elite-linked all-white, all-male cabinet for the first time since 1979, in a country where more than half of the population identifies as of African origin.

Two of the members of this cabinet — who, along with the interim president (Michel Temer), are presently under investigation for crimes — resigned in just two weeks after secret recordings were leaked in which they admit that they deposed the guiltless, non-corrupt elected president for trumped-up non-impeachable offenses in order to prevent her from investigating actual corruption that they are involved in.

One of those now-resigned cabinet members was the minister (Fabiano Silveira) who was supposed to be devoted to corruption, and who is himself involved in a serious corruption scandal that he was actively trying to prevent a probe into (Operation Car Wash, an official investigation into widespread bribery at the state-controlled oil company Petrobras).

That is to say, the corrupt right-wing opposition peacefully toppled the non-corrupt elected left-wing government on exaggerated, non-impeachable allegations of non-criminal corruption in order to prevent an official investigation into actual, serious, criminal corruption.

Meanwhile, the U.S. has remained silent, essentially giving tacit support to the coup. Reporters have asked the State Department about Brazil and it has persistently refused to comment. Every time it has been asked (which has not been much), the State Department has refused to say anything, other than, "I'm not going to speak to internal Brazilian politics" (ask it to speak about internal Russian, Syrian or Iranian politics, though, and it has no problem doing so).

A White House spokesman insisted Obama “has faith in the capabilities of the democratic institutions of Brazil to hold up against political turbulence.” For weeks, the U.S. — which has a long history of backing coups in Latin America, most recently in Paraguay in 2012 and Honduras in 2009 — has treated the coup regime as Brazil's legitimate government.

Renowned scholar Noam Chomsky has described the outrageous developments in Brazil as a "soft coup," noting the elected leader, Rousseff, is “the one leading politician who hasn’t stolen to enrich herself, who’s being impeached by a gang of thieves, who have done so.”

“The elite detested the Workers’ Party and is using this opportunity to get rid of the party that won the elections,” Chomsky said. “They’re not waiting for the elections, which they’d probably lose, but they want to get rid of it, exploiting an economic recession, which is serious, and the massive corruption that’s been exposed.”

Or, as Pulitzer Prize-winning journalist Glenn Greenwald has put it: “Brazilian financial and media elites are pretending that corruption is the reason for removing the twice-elected president of the country as they conspire to install and empower the country’s most corrupted political figures.”

Brazilian oligarchs, Greenwald added, are trying to remove “from power a moderately left-wing government that won four straight elections in the name of representing the country’s poor, and are literally handing control over the Brazilian economy (the world’s seventh largest) to Goldman Sachs and bank industry lobbyists.”

There is no doubt whatsoever, in any way, that that is what is being carried out: this is not just undemocratic political chicanery; it is a bloodless coup.

And the right-wing opposition in other Latin American countries with left-wing governments, especially Venezuela, are presently looking to Brazil's coup as a model.