The Trump-addicted media scolds itself -- but can't resist his toxic, stupid bigness. Can we break the cycle? 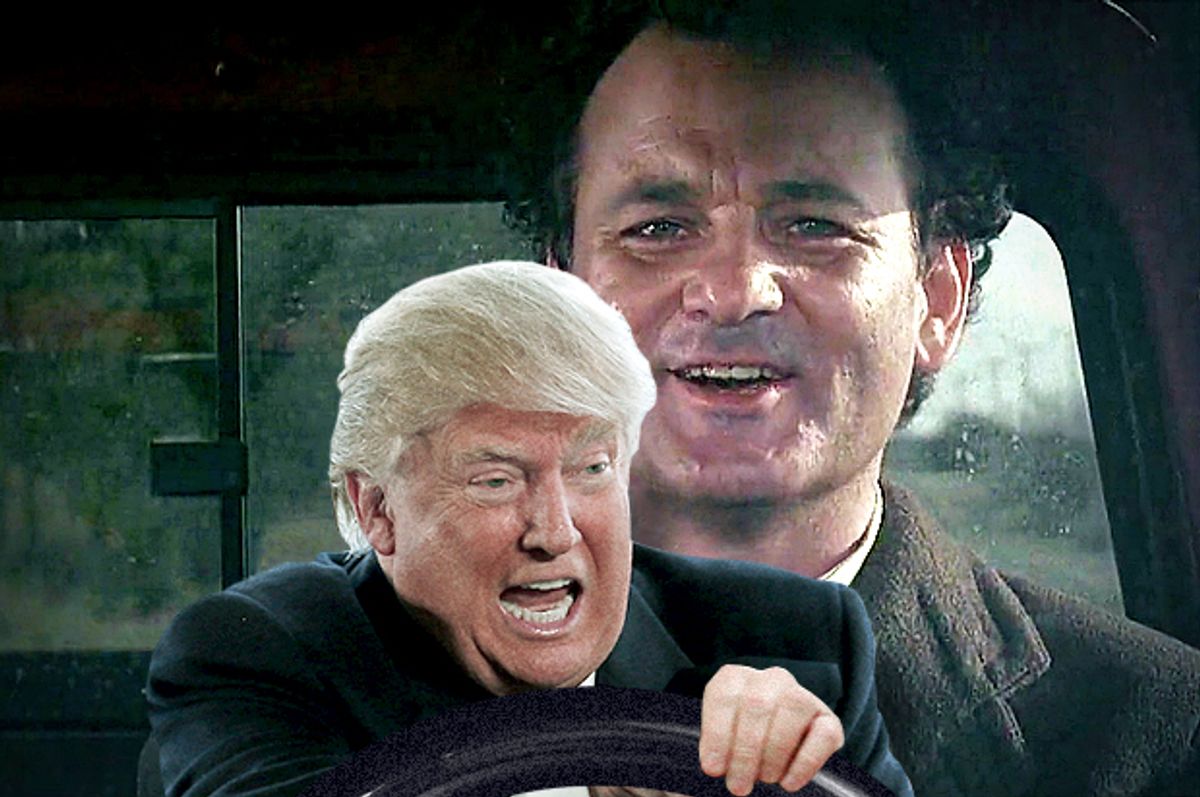 So here I am, writing another article about the unbelievable ignorance and stupidity of Donald Trump, and the unbelievable ignorance and stupidity of a country that can’t get enough of him, barely a week after writing another article blaming the relentless media coverage for inflating Trump to his current solar-eclipse dimensions. It can’t be helped. Our entire country, and its media caste in particular, is like the alcoholic who winks at the bartender and swears on his mother’s grave that he’ll quit drinking tomorrow. Or possibly the day after that.

We know we’re only feeding Trump by talking about him; as I observed last week, in that respect (and others) he is like Candyman, or Cthulhu. But we can’t stop. I mean, look: I wrote this, and now you’re reading it. Trump is news, and Trump is the monster that ate the news. The fact that Trump never stops being news, and that he ate the news, is itself news. Except he ate that too. It’s a world-encircling Ouroboros of futile discourse, a “Groundhog Day” of national stupidity where we keep doing the same things over and over, knowing full well that nothing will change. I guess the endless cycle will actually come to an end in November, either in the zombie apocalypse of a Trump triumph — which will be such a dismal experience for his supporters, in the end, that I almost want it to happen — or in the sagging, sad parade balloon of President Hillary Clinton. (I challenge anyone, literally anyone, to tell me they look forward to that with eagerness and hope.)

This week in Trumpian pointlessness has already brought us two unctuous media heavyweights marinating in the ooze, with predictably ambiguous results. The Hollywood Reporter, which at least officially is a publication focused on show business rather than politics (I will not bother explaining that there is no longer any difference), features a big interview with Trump by Michael Wolff, conducted at the candidate’s house in Beverly Hills. You didn’t know Trump had a house in L.A.? Neither did I, and it’s not clear Trump could find the fridge in the middle of the night if he needed to; he told Wolff he’s only there about once a year. He also has cribs in Manhattan and Westchester and Florida and God only knows where else. If I endorse you, Donald, can I live in one of the houses you’ve forgotten about?

In the same issue of the Reporter, former MSNBC and ESPN talking head Keith Olbermann wrote a guest column excoriating the media for going too soft on Trump because he drives TV ratings and internet clicks and advertising dollars. Well, shiver me timbers! I like Olbermann, pretty much: He was an enormous breath of fresh air in Jockland back in his “Sports Center” days, and if a loudmouth white guy with glasses can make a decent living off his outrageous opinions, there may be hope for me. But Keith got snagged on his own flypaper here, as indeed have we all. Of course he’s right that Trump coverage has been constricted by “the most effective form of self-censorship” imaginable, that being the love of money, which I think someone once described as the root of all evil. But everything Olbermann says is canceled out, and more, by Wolff’s masterwork of lickspittle smarm.

Before I go any further with this, let me acknowledge the peculiar potential conflicts involving both Wolff and Olbermann, even though I’ve never met either of them. Keith Olbermann was a columnist for Salon in the mid-2000s and had, shall we say, a contentious relationship with Joan Walsh, who was then our editor. Somewhat more recently, Michael Wolff was reportedly involved in an attempt to purchase Salon from its majority shareholders. Whether that outcome would have been good or bad for me personally I have no idea; after what I just wrote, I certainly hope Wolff doesn’t buy us now.

Wolff’s interview with Trump is a smooth piece of work, or so its author evidently believes. It’s full of name-dropping, veiled hints and insider-ish references; no doubt Wolff would argue that his dispassionate reportorial cool and focus on quotidian detail serve the reader’s interests by offering Trump more than enough rope to hang himself (or to throttle us). It begins thus: “The long day is ending for Donald Trump with a pint of vanilla Häagen-Dazs ice cream.” Would I write that sentence too, if I had the kind of access that involved “settling in for a late-night chat” with the prospective Republican nominee? (That’s in the second sentence.) Is it fair to judge Wolff for being the kind of journalist who gets cozy with the movers and shakers?

Oh, you bet it is. Sure, I’d have a late-night chat with Trump too, at the time and place of his choosing. It’s the “settling in” that gets me. It’s Wolff’s constant need to assure us that he is well connected among the wealthy and powerful, and now bestows upon us some of their reflected glory. In private Trump comes off as uniformly “upbeat and positive,” Wolff writes, whereas for “most public people I know, it is the opposite.” (We are left to imagine the long and impressive list of “public people” Wolff knows.) Maybe that “settling in” is meant to have a sardonic edge, but mostly it’s just smug. Or smug-donic. As Wolff writes later, describing Trump’s cheerful back-and-forth with ABC late-night host Jimmy Kimmel, “everybody here is honest about being a phony.”

There might be a certain moral or ethical legitimacy, in the context of a showbiz publication, for judging Trump primarily in terms of semiotics and performance, as an avatar or persona whose ideology is irrelevant or nonexistent. It’s not the Hollywood Reporter’s job to save the republic, right? Or anyway, there might be a defense for that if it weren’t the only thing we’ve been doing for the last 10 months or so, marveling at the magnificent success of a package whose contents are unknown. As Olbermann tries to point out, in his typical overworked prose (I know, I know — I should talk!), the media has thrown away its moral legitimacy when it came to covering Trump, out of sheer gratitude for his bigness, his outrageousness, his success and his unparalleled ability to move the needle.

Those morally neutral qualities of bigness and outrageousness and immense success are precisely what Wolff celebrates in his Reporter interview, and despite the occasional smug-donic aside meant to demonstrate his pseudo-independence, he doesn’t even pretend not to be in love. Discussing the fact that the only conversational topic that actually interests Donald Trump is his own greatness, Wolff writes, “You can try, but it’s hard to resist this admiration for himself.” As a friend’s dad used to say, Jesus jumping Christmas crap. If it’s really that difficult to resist a hateful, horrible, avaricious and ignorant person’s capacity for self-regard, you are not a writer or a journalist in any meaningful sense. You are a Gollum-like parasite trapped in the lower digestive tract of our narcissistic culture, hoping not to get flushed out by the colonic purge that may one day come.

When Wolff finally works his way around to his actual conversation with Trump — did they use one or two spoons for that pint of Hägen-Dazs? — he observes, almost in passing, that the man who will soon be the Republican nominee for president doesn’t know anything about anything “outside himself, his campaign and the media.” Trump doesn’t know what the word “Brexit” means (the upcoming vote on whether Britain should leave the European Union), although he says he’s for it once it’s explained to him. He does not appear to have heard of Peter Thiel, the Silicon Valley billionaire who funded Hulk Hogan’s sex-tape lawsuit against Gawker. (Once better informed, he’s in favor of that too.)

Trump denies having met with Italian right-wing politician Matteo Salvini, although their meeting in Philadelphia, and Trump’s endorsement of Salvini’s anti-immigrant party, has been widely reported. He sees no similarity between his own rise and that of Marine Le Pen, the firebrand leader of France’s anti-Muslim National Front party, but even Wolff perceives the real problem, which is that Trump simply “isn’t interested” in such comparisons and sees no profit in them.

“It is hard not to feel that Trump understands himself,” Wolff writes in a late moment of chin-pulling, “and that we’re all in on this kind of spectacular joke. His shamelessness is just so … shameless.” (Ellipsis in original.) Is that the kettle describing the pot, or what? That’s not analysis; it’s craven toadying from a media-blinkered pseudo-intellectual trying to put a favorable gloss on a small-minded and vainglorious would-be despot who has channeled our country’s worst and stupidest instincts and turned the 2016 election into an atrocity exhibition. I mean, we richly deserve it. We deserve the whole damn thing, and if that's the point Wolff is making then I agree with him. He sounds suspiciously delighted about it, though.

Some degree of smug-donic self-incrimination may be involved when Wolff admits that he asked Trump to tweet about his book, and admits that he urged the candidate not to use a teleprompter for his acceptance speech at the Republican convention. “Who would want to miss that?” Wolff muses. I don't know, let me think about that: any person with a few lingering shreds of decency, perhaps? Wolff’s conclusion is that Trump’s incoherent policy proposals and eruptions of hate speech “are not him,” but “are just a means to an end — to the phenomenon. To the center of attention. The biggest thing that has ever happened in politics.”

I have no idea what that means, and after reading several thousand words, I also have no idea whether Wolff thinks that Trump is a good thing or a bad thing. I know that Trump has been good for Wolff’s livelihood, as for mine. I know that our collective efforts to derail Trump or make him look ridiculous have backfired, so far, and that the shame of that will stick to our profession for some time. Wolff’s greatest moment of smug-donic self-congratulation comes when Trump expounds on what a long day he’s had, giving speeches and holding rallies and doing the Kimmel show and then having a late-night Häagen-Dazs liaison with Wolff. “You’re not a two-minute interview guy,” Trump says. No, he’s not. He’s a shameless suck-up who has thrown away his moral compass in order to grovel before your throne. And he’s not alone.