Paul Ryan's secret plan to save the GOP, after Trump: Turn it into Uber 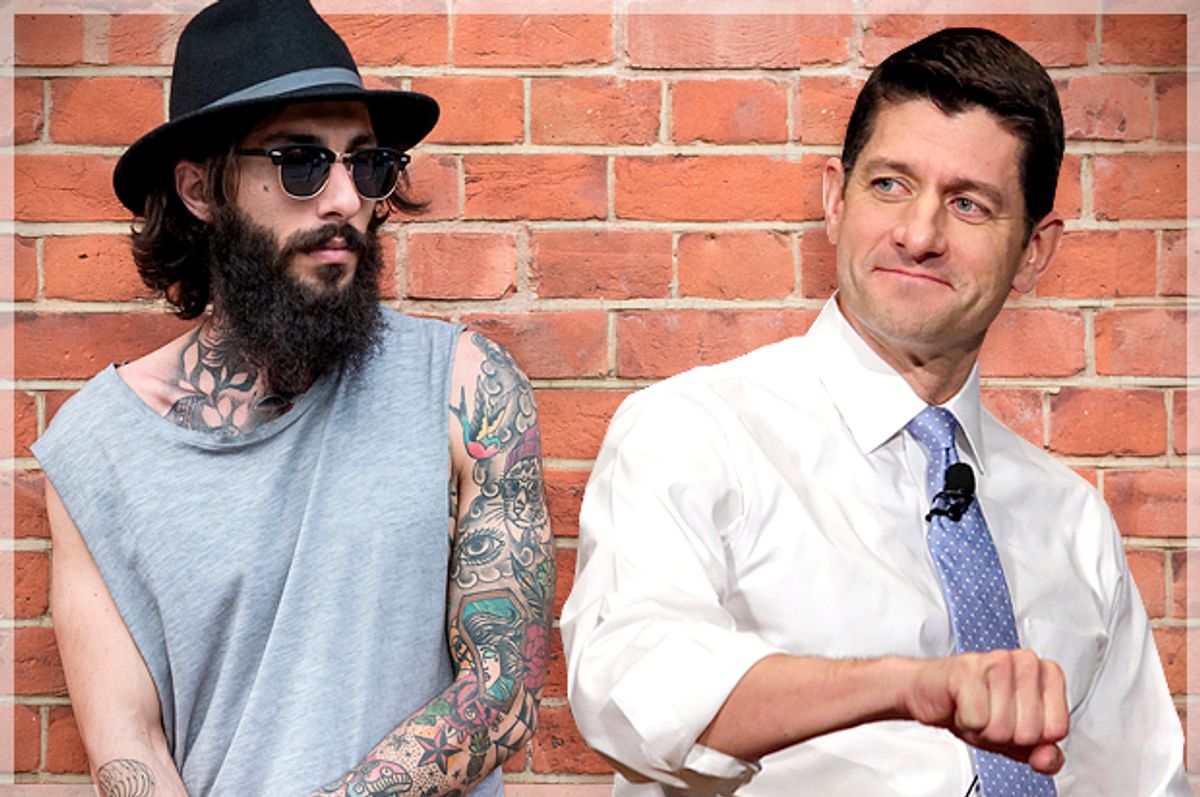 I’m not sure whether the current Trump-zombie condition of the Republican Party is best described as a headless chicken or a runaway locomotive. Can something be both terrifying and pathetic at the same time? Washington Irving’s Headless Horseman, mixed with Super Chicken, riding the Steel Wheels of Doom? Anyway, while virtually the entire Republican establishment got into line this week behind a prospective nominee it dislikes and mistrusts and fears (with good reason) may be leading it into a dark abyss whence no man returns alive, Paul Ryan unveiled his secret plan to save the party. By turning it into Uber.

No, I’m serious. At least I think I am. To quote one especially illiterate highlight from the deep trove of comedy gold called “Growing Up GOP: Fresh Ideas From the Fresh Faces of the Republican Party,” published this week on the website millennial.gop — I know! You can’t make this stuff up — ahem: “We can appeal to the voters of the future by asking them to choose between an approach that works more like uber [sic] and less like an old, yellow, taxi-cab company.” First of all, read that so-called sentence over a couple of times while telling yourself that someone who presumably went to college, and whose native language is presumably English, wrote it, and that someone else presumably read it before it went out the door. Fresh ideas from the fresh faces of the Republican Party! Who do not know how to read.

That’s before we even get to the bottomless, vapid idiocy of the idea that is supposedly being expressed: “Freedom,” that totemic core value at the heart of Republican ideology, is best expressed at this point in the 21st century by a smartphone app that allows you to order a private car service. Well, that beats the hell out of all that Bernie Sanders nonsense about economic inequality and political oligarchy and an educational system that leaves young adults hundreds of thousands of dollars in debt! Why worry about that stuff when you can undercut the wages of some Pakistani cab driver who lives in one room in Queens with five kids and his mother-in-law? Fuck you, Abdullah! And don’t be late; I’ve got some important disrupting and innovating to do.

Either “Growing Up GOP” is the greatest spoof in the history of spoofery, or it represents Ryan’s blueprint for hauling the smoldering remnants of the Republican Party out of the Trumpian abyss after what most Republicans believe (and some hope) will be a cataclysmic defeat in November. One of the wonders of our age is that we have reached a singularity of meaninglessness, and there is no difference between those things. Political satire has become indistinguishable from political rhetoric. “Growing Up GOP” would have struck George Orwell as too shallow and too devoid of psychological insight for modern politics; it would have struck Tony Hendra and Michael O’Donoghue, master satirists of National Lampoon magazine in the ‘70s, as too obviously fake. (I’m going to send this article to P.J. O’Rourke as soon as I’m done writing it. Either he’s responsible for millennial.gop or it will send him into a monastery.)

I have twice accused Paul Ryan of being the driving force behind “Growing Up GOP,” although he is not the report’s official author or sponsor. It was largely produced by the College Republican National Committee, with support from other GOP entities, and its principal author is pollster and consultant Kristen Soltis Anderson, a person who has written an actual book called “The Selfie Vote.” But this hilariously incoherent hodge-podge of generational buzzwords and business-school clichés could not carry the House Speaker’s ideological DNA any more clearly if he had … well, I had an analogy in mind, but let’s drop it. Ryan is its baby-daddy, if I am using that term correctly. (Marketing to millennials!)

Furthermore, the fact that this report was released to the public on the same day that Ryan finally and begrudgingly admitted he would support Donald Trump in the fall was obviously no accident. It was Ryan’s nod-plus-wink to Republican cognoscenti: I’m on board this train, kind of, but I’m jumping off five seconds after Trump’s weepy concession speech. “Growing Up GOP” is the crossed fingers, visible to all, that Ryan holds behind his back as he vows allegiance to the stupid choice made by the stupid Republican base.

Ryan is referenced and quoted over and over in “Growing Up GOP” as a leading example of the “open, bottom-up approach to problem solving” that will supposedly create inroads for Republicans among the younger voters they have so spectacularly lost. No other living Republican politician is ever mentioned by name, unless you count a nostalgic backward glance at Mitt Romney, who will never again be a candidate for anything and who — come to think of it! — picked Ryan as his running mate in 2012. Actually, this report’s number-crunching on that election is fascinating: The Romney-Ryan ticket lost the popular vote by about 4.9 million votes, we are told, but lost among voters aged 18 to 29 by 5.6 million votes. In at least four crucial swing states that Barack Obama carried twice — Florida, Nevada, Ohio and Virginia — the same pattern can be seen. Younger voters literally made the difference.

In other words, if no one under 30 had voted in 2012, or if they had voted in roughly the same proportions as older people did, then we’d be partway through President Romney’s re-election campaign right now. That’s a deeply confusing alternate universe that’s not worth thinking about, but the point is that Ryan’s think-tank mavens understand that the Republican Party has a massive branding problem with younger voters that is sending it down the slippery slide toward political oblivion. Not far below the surface of Anderson’s bland, peppy innovation-economy prose, “Growing Up GOP” suggests that Donald Trump’s white-rage platform is not the answer to this problem.

Actually, the rejection of Trumpism is hidden in plain sight; it’s just that you have to wade through several dozen pages of mind-numbing pabulum about “upbeat messaging” and “openness, disruption and choice” to get there. (I have read this damn thing all the way through. Twice. Do I get combat pay, or PTSD counseling?) At the tail end of “Growing Up GOP" comes an add-on report written by veteran Republican consultant and talking head Alex Castellanos, who is definitely not a millennial but may be slightly less of an idiot than Kristen Soltis Anderson. Castellanos apparently came up with that massively irritating Uber-vs.-yellow analogy, but on the penultimate page of the report he also wrote this:

"What should we do about the Republican Party we see before us?

"Just as our party is expressing the legitimate frustration of working-class
Americans with Washington’s limp, self-perpetuating elites, we risk alienating ourselves from the voters we need to win elections.

"Imagine how different our prospects might be in 2016 if the conservative cause and the Republican Party were energized not only by populist Reagan Democrats but also by aspiring minorities, millennials, suburban women, and others?

"In 2016, if we continue to confirm the cliché of the GOP as visionless, angry, and unkind, we risk bringing upon ourselves a Mondale-like presidential defeat, and we might also lose the U.S. Senate, suffer a catastrophic loss of seats in the House, and threaten modern highs in state-level offices and state legislative majorities. The Republican party [sic] could become a political relic that would not win the support of voters for generations."

I don’t think that could be any clearer. I suppose if I got Castellanos on the horn right now he would say, oh no, he didn’t mean to diss Trump in particular, or the cadre of pissed-off, downscale white men who have made him the Republican nominee. But give me a break. None of the great shibboleths of the Trump campaign are even mentioned in “Growing Up GOP”: The words “immigration” and “Mexico” do not appear in the document, and neither do “Islam” or “terrorism.” For that matter, most of the core Republican issues of the last 40 years don’t come up either. Abortion is never mentioned, although Republicans are advised to appeal to younger women by supporting over-the-counter birth control. Religion and LGBT rights come up only in passing and in the same paragraph, when we learn that millennials support same-sex marriage but are OK with Christian cupcake-bakers sending gay couples elsewhere. No aspect of foreign policy is discussed at all.

Castellanos specifically rejects the idea that Republicans have to look and sound more like Democrats to appeal to young voters, but that’s almost exactly what Anderson’s advice amounts to in the main body of the report. What fresh ideas are proposed here — that is, beyond the idea that Paul Ryan can get you a cheaper ride to the airport? Well, Republicans need to prove they “empathize with others,” regardless of race, religion, socioeconomic status or sexual orientation, Anderson writes. They must propose pragmatic solutions to address poverty and inequality, to improve K-12 public education and make college affordable. So all Republicans need to do, in order to compete effectively for younger voters, is to change their image, their messaging, their tone and their core identity. But, honestly, that’s it!

I’ve said this before: Republicans had a hypothetical opportunity in 2016 to rebrand themselves as a libertarian-flavored center-right party that didn’t care what you smoked or who you slept with but was all about low taxes and school vouchers and disengaging from pointless overseas wars. I’m not saying I would support such a party, mind you, but it would represent a somewhat sane and consistent set of alternatives to the failed Republicrat power structure, and would undoubtedly pull more younger voters, and more voters of color, than any version of the GOP since the New Deal. That opportunity is gone, as Rand Paul can tell you, and “Growing Up GOP” is at best a watered-down, focus-grouped, panic-stricken attempt to bottle a little bit of that possibility and set it aside for the future.

The other thing I’ve said before, and will undoubtedly say again, is that despite this highly entertaining testimonial to Republican panic (and the fatal weakness of Republican copyediting) the Democrats aren’t in such great shape either. Will the Republican deficit among millennials be sufficient to push Hillary Clinton to victory over an odious billionaire who will get approximately zero votes from African-Americans or Latinos or younger women? Yeah, I guess so — but only if those younger voters show up for Clinton, and let’s not pretend we’re not all jumping-bean nervous about that. We are drawing near the end of the current two-party system: Just because one of them is dying first, in violent and spectacular fashion, doesn’t mean the other is healthy.