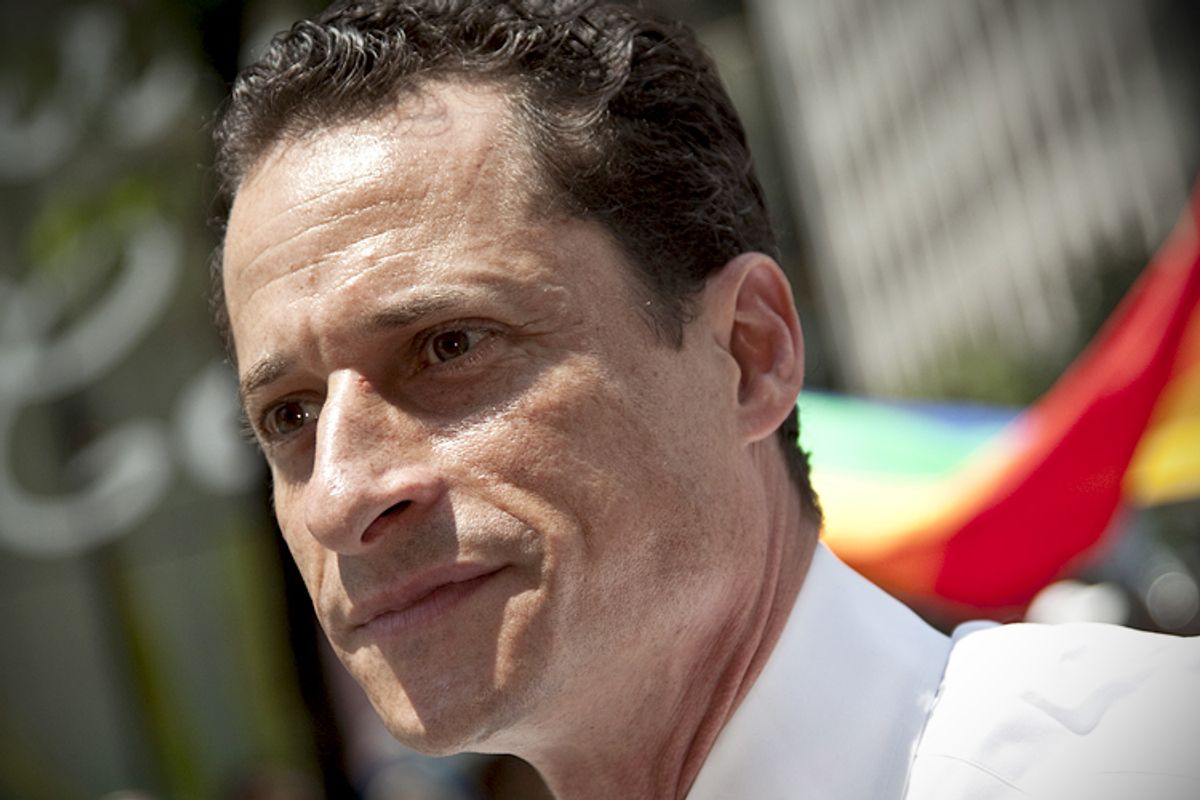 It’s a great campaign documentary but it’s about a lot more than a campaign, and a lot more than Weiner’s...the pun is nearly irresistible. The film is also in large part about the media coverage, and the coverage of the film, with some exceptions, doesn’t really get that. Instead, the media mostly assumes that it was a bad idea for Weiner to do a documentary that purportedly makes him and his wife, Hillary Clinton senior aide Huma Abedin, look bad. I think that this unexamined assumption is a wrong one, as is the continuing premise that Weiner did anything wrong vis-à-vis voters by sending consensual dick pics. The most important question raised by the film isn’t why Weiner sexted but why the media persistently believed this made him unfit for office.

After the second installment of sexts is made public, Weiner is at a press conference about non-profit policy, and the imaginary line between tabloid trash and mainstream news evaporates. A horde of reporters declines Weiner’s request to ask even a single on-topic question and then unloads with, “How many women were there? Can you remember?” And, "Why don't you just right now tell everybody everything that you can possibly remember about this so that we all get it out of the way and then you can go back to the real campaign?”

Simply put, they can’t “all get it out of the way” and “go back to the real campaign” because Weiner had the misfortune to carelessly make public what in 2016 are truly banal private demons (Pew has some enlightening numbers on just how mainstream sexting has become). And because the media would never forget it.

Initially, voters mostly seemed put off by the media obsession. Weiner had rocketed to the top of the polls, and the film portrays New Yorkers, particularly gay ones and people of color, as not taking kindly to moralizing scolds and embracing the sinner. When opponents mock or criticize him at candidate forums, they are booed. At what appears to be a Colombian parade, one woman yells at Abedin, "Thank you for supporting him...Bullshit everybody else!"

The second sexting scandal was supposedly important because it demonstrated that Weiner had sent intimate electronic communications after resigning from Congress in 2011. But even then, it’s unclear whether voters were angry at Weiner for blowing a second chance or just plain tired of the media circus. At a press conference on housing in the Bronx, Weiner is asked if he has a “a sexual addiction” or “disorder.” A woman standing nearby scolds the credentialed mob. “Who cares about his issues?” she asks, clearly upset. “We want to know what he’s going to do for us. We don’t care about that personal garbage. We’re from the Bronx.”

Near the end of the documentary, Weiner ruminates on why he decided to allow the camera in and why he thinks that the documentary, in spite its noble intentions, will not get its message across.

"The scandal has been reduced ad absurdum,” says Weiner. “The laws of entertainment gravity are going to suck the documentary into the same vortex…as much as you may want to tell a story, it’s still going to be the same frame of the same thing."

It was Abedin’s call whether or not to divorce Weiner. She didn’t, to the media’s fascination and puzzlement. I don’t care much about Weiner’s personal life, aside from the fact that its turbulence was brilliantly depicted in this excellent film. And I don’t know enough about him as a politician to comment on whether he is a good one or a bad one. But I still don’t understand why he resigned from Congress: what crime was committed? And even for the haters: wasn’t public humiliation punishment enough?

It’s true that the film reveals Weiner to be an egocentric narcissist. And those personality traits no doubt played a role in his unquenchable desire to seduce internet fans into e-trysts. But Weiner is more the sacrificial lamb than a bad apple: politicians, like others, do weird things, and the media’s fascination has more to do with our own repressed and secreted away libidinous nether lives that it does theirs. More than anything, Weiner stands out as the rare politician willing to publicly reflect on the bizarre psychological profile that animates most public figures, and he does so with candor at great length.

The media, however, had by the scandal's second round seemingly gained even higher moral ground, insisting that it wasn't the sexts that kept them up at night so much as Weiner’s dishonesty: He had led the people via a People magazine story to believe that he was rehabilitated from his freakish ways and he was not.

Weiner calls the media on their pretense, noting that the lie gave them a helpful excuse to feed an ugly beast that they were intent on feeding no matter what. "They got the comfort of being able to"—an aide finishes the sentence—"righteously vilify you." Weiner then pours a large quantity of what appears to be shoestring fries down his throat.

Whose instinct wouldn't be to lie to or mislead or somehow be less than forthcoming to a reporter about one’s sex life? What, in the end, is this supposed to tell us what about someone's character as a politician?

Since Gary Hart, public figures’ private sexual peccadilloes have been public interest for god knows why. Thankfully, that may be changing. Bill Clinton, who actually did things that are plain unethical, won a groundswell of public support. Gawker’s publication of Hulk Hogan’s weird sex tape has won the former wrestler a surprising amount of sympathy and a tremendous jury award. Gawker’s exposure of an important but relatively powerful media executive’s plans to meet up with a same-sex sex worker elicited widespread opprobrium and disgust.

By the end of the film, Weiner gets ruminative. “There’s a phoniness on that side of the debate about how outrageous my behavior is,” he says. “They love stoking it. They love talking about it. They love building me up, having me on their show so they can excoriate me and everything else.”

When the crowd boos at Weiner’s competitors for maligning his sex life, they're booing the media as well. Another sexual revolution is underway, long in the making and too-slow in the coming. For many, consensual private sex lives are becoming less taboo either because people don’t care or because they too are down for whatever. It’s time that we elect some open swingers, sex workers, fetishists and freaks to office. Until then, the media-abetted fascination with the discrepancy between public faces and private lives will continue to vacuum up too much oxygen in a public sphere that desperately needs to muster its forces to solve some really big and horrible problems.