"This is about a woman learning to trust her gut": Sarah Hepola on "Blackout" and the lessons of sobriety

Salon speaks to Hepola about trust, consent and new beginnings, as well as her memoir, now out in paperback 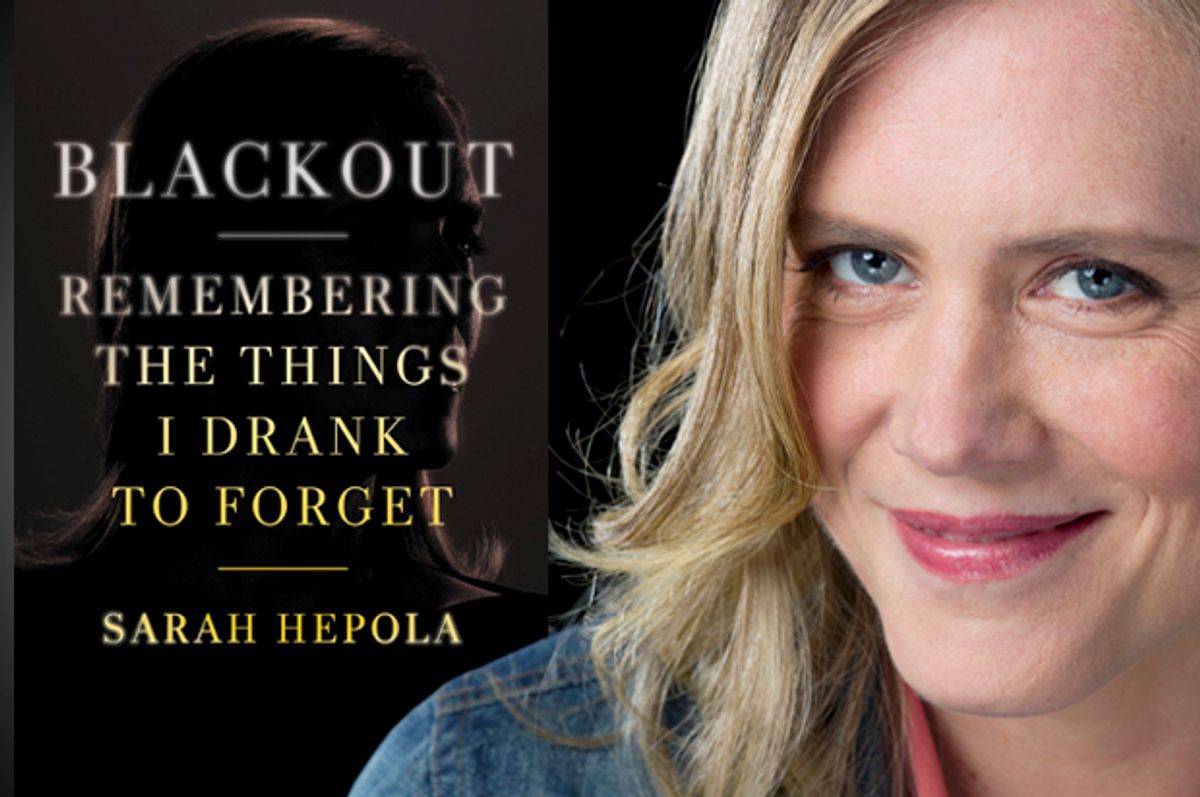 It wasn't long after I first met Sarah Hepola, nearly a decade ago, that we found ourselves out drinking together. After all, as she herself would tell you, drinking is a social shorthand. "Let's get a drink" is an easy way to say, "I like you and like hanging out with you." But what I didn't fully grasp at the time — even when Sarah herself would allude to it, sometimes jokingly, sometimes with a sense of deeper concern — was that she was not a typical social drinker. My friend and colleague had a problem, one that I later learned including binging and blackouts — periods of time in which she was conscious and functioning but was in a state her memory would not be able to retrieve.

Then, a few years ago, she got sober. As she details in her wise, honest and deeply entertaining best-selling memoir "Blackout: Remembering the Things I Drank to Forget" — out this week in paperback — her spiral into forgotten nights and regret-filled mornings after was tough, and her road to sobriety was as well. This is not a story of shaking off the wreckage of the past and finding instant bliss. Instead, she writes, "For years, I'd hated myself for drinking, but I didn't expect to hate myself this much after I quit." Yet with tenacity and heart, she eventually found her way to a better place.

I talked to my old friend via phone this week about where she is now a year after her memoir's acclaimed debut, about the controversial topic of drinking and consent, and about the joy of imperfection.

You know that first I have to ask you about the Brock Turner case. Have you been following it? What did you think of his argument that this was about "partying and drinking?"

There are a lot of things to talk about in that 7,000 word statement, but one of them is that the woman experienced a blackout that night. One of things I wanted to do in my book is make women aware they are more vulnerable to becoming in a blackout. We teach women to cover their drinks so they don't get roofied. We haven't done as good a job teaching them that the drinks they buy for themselves can do that to them. I was never roofied. I roofed myself. I don't have a situation in my life where I woke up and thought, I didn't consent to that. I have had situations where I thought, why am I such an idiot, and why did I go after that guy?

I was a very functional blackout drinker. I presented as surprisingly functional. There are a lot of women who are not like that, and then they can't remember. I heard a story from a women saying the last thing she remembered was peeing on herself. This is why I wrote that Texas Monthly story. Coming from the drunk world where everybody gets drunk and hooks up, I felt we needed to have a conversation about consent. I knew there were times when I didn't know what was okay, I didn't even understand it. I still think blackout can lie in the gray zone of consent. I think you can be blacked out and consent, and there's no way the other person can know you're in a blackout. And there are other times the person is falling down and peeing themselves, and that's different. I have a friend who works in a rape crisis center who hears from women who say, "I don't know if I was assaulted because they don't remember."

What has changed for you in the past year since the book came out?

I was so scared when I put the book out, for a lot of reasons. Maybe my biggest fear was nobody would care. Then I started hearing from people who had the same alcohol problems, who had the same discomforts. And a lot of the people I talk to are not even drinkers; they have anxieties and different things. When I started hearing from people, I knew I was glad I did this. What I learned was that I was right to trust my gut on this. I think this is a story about a woman learning to trust her gut. A lot of my life was, I don't think like other people — let me drink till I agree with them! So I'm going to think and triple think and quadruple think my decision to put out a book, and now I feel I was right to do this. I get emails every day, and it's been a year. And they're describing some shit show and they're trembling and terrified, and they find my book. I just think, I'm so honored to be a book that gave them comfort.

Now that you're the official spokesperson for blackout drinking, what's next?

I think talking to people who want to quit drinking is part of the fabric of my life. When I get to talk to somebody who's going through some of the stuff I'm going through it takes me out of my brain and reminds me I can be useful. In my professional life, I'm ready to talk about other things. I'm really looking forward to it. I'm working this summer on a book about my relationship with men, and about masculinity and femininity.

The lesson of sobriety is that I had to become a beginner. I had to be new and young and unskilled at something. I had cut out so much joy and was making my life smaller and smaller, and when I started to give myself permission to fail and screw up and not have that threaten my identity, to give myself permission to be bad at something, it brought so much joy into my life. Everything we're doing takes time. We live in this instant gratification society. I think we get panicked and confused when something takes effort. But are we afraid that people will stop loving us and caring about us if we're not perfect? What if we said, live your life — you don't have to earn the world's love?