“Champ, can I come in?”: How a 19-year-old intern scored this iconic Muhammad Ali photo 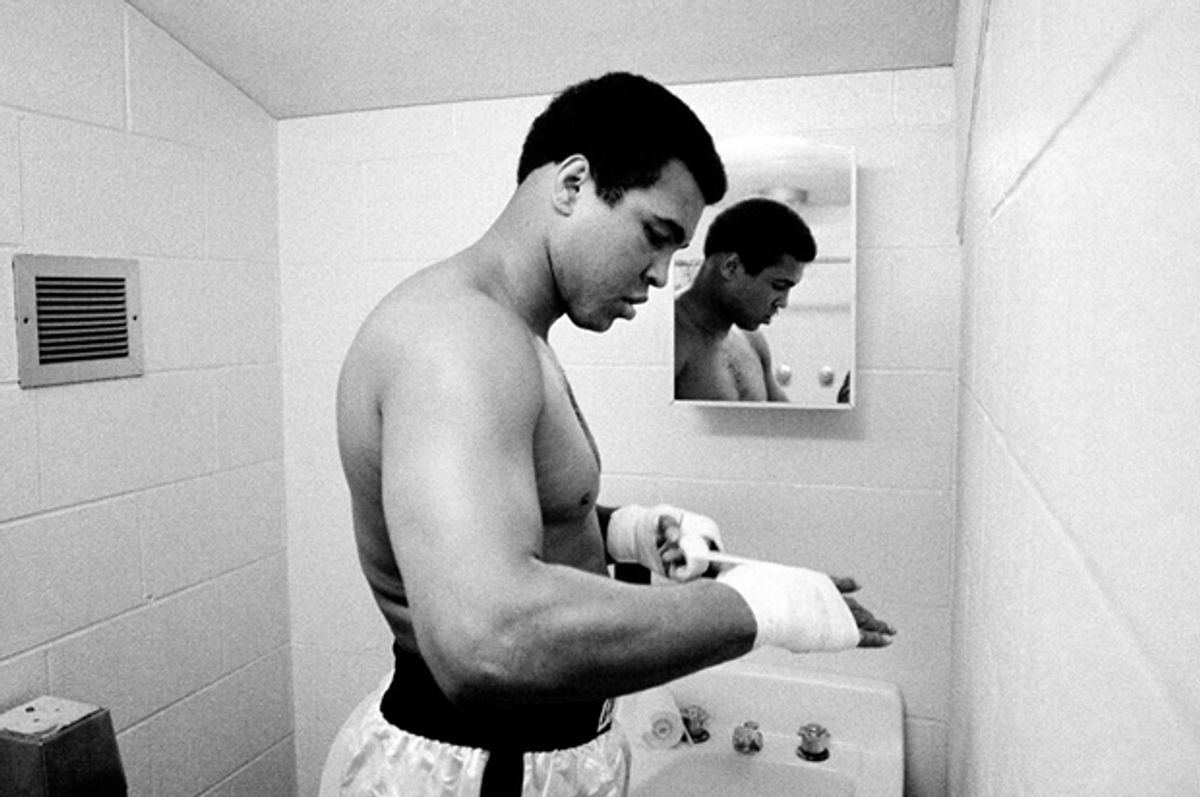 One of the most iconic portraits of Muhammad Ali was taken by a 19-year-old newspaper intern. Dan Dry, the Pulitzer-winning photographer behind the shot called “Ali, the Greatest of All Time,” shares his memories of that night.

How did you get the shot?

I was a “pregnancy replacement intern” for the Courier-Journal. It was December 10, 1976, and I got to go to an exhibition match featuring Ali. I want to say he was in his late 30s at the time. It was going to be taking place at Trinity High School, in the gym there. He was boxing against sort of an unknown at the time, Greg Page -- he actually went on to become a world heavyweight champ, but at the time no one really knew him. Louisville kind of claims him now like they do Ali.

Anyway, I went in before the match and sort of instinctively went to the locker room. There he was, surrounded by family and friends and other folks. Then he got up to go to what I assumed was the bathroom. I gave him a few minutes, but not too long.

I knocked on the door and said, “Champ, can I come in?” I was intimidated as heck, but here you have the greatest in the world by himself -- no trainers, no handlers or anything. He was wrapping his hands with that tape you use before you fight. This was back in the days of film and I was shooting in black and white.

I shot about four frames, and then I left to photograph the match.

How old were you?

Did you know that you had something with the potential to become iconic?

People ask me that all the time, but no. I am just really humbled that this photo has stood the test of time, especially since he was such an amazing athlete and person who was an inspiration for so many folks.

What was the reaction like when you got back to the newsroom?

As I said, I was just an intern. I remember sliding a print onto the sports desk and the guys saying, “How in the heck,” -- well, they probably didn’t say “heck.” They said “How the hell did you get this?” I thought I was just going to be at the Courier for a few months, but I ended up staying there for five and a half years, and then on to National Geographic after that.

What do you do now?

I am the managing director of content creation at PriceWeber [an advertising agency in Louisville].

Where were you when you found out that Muhammad Ali had passed away?

I had been out late with a colleague from PriceWeber, actually. I was planning on going to California the next morning for the American Advertising Federation conference, but I got a call from Dawn Gee [a local newscaster] who told me that he had passed away. I mean, I know he had struggled with his health -- so it wasn’t so much a matter of it, but when -- but I was shocked. Dawn asked if I could be at the studio that next morning at 5 or 6, which I said I could. Then the emails about that print started coming in. Needless to say, it was a sleepless night. As I said though, he was so inspirational to so many people and I am really amazed that this photo has turned into what some people say is an iconic photo of Ali.