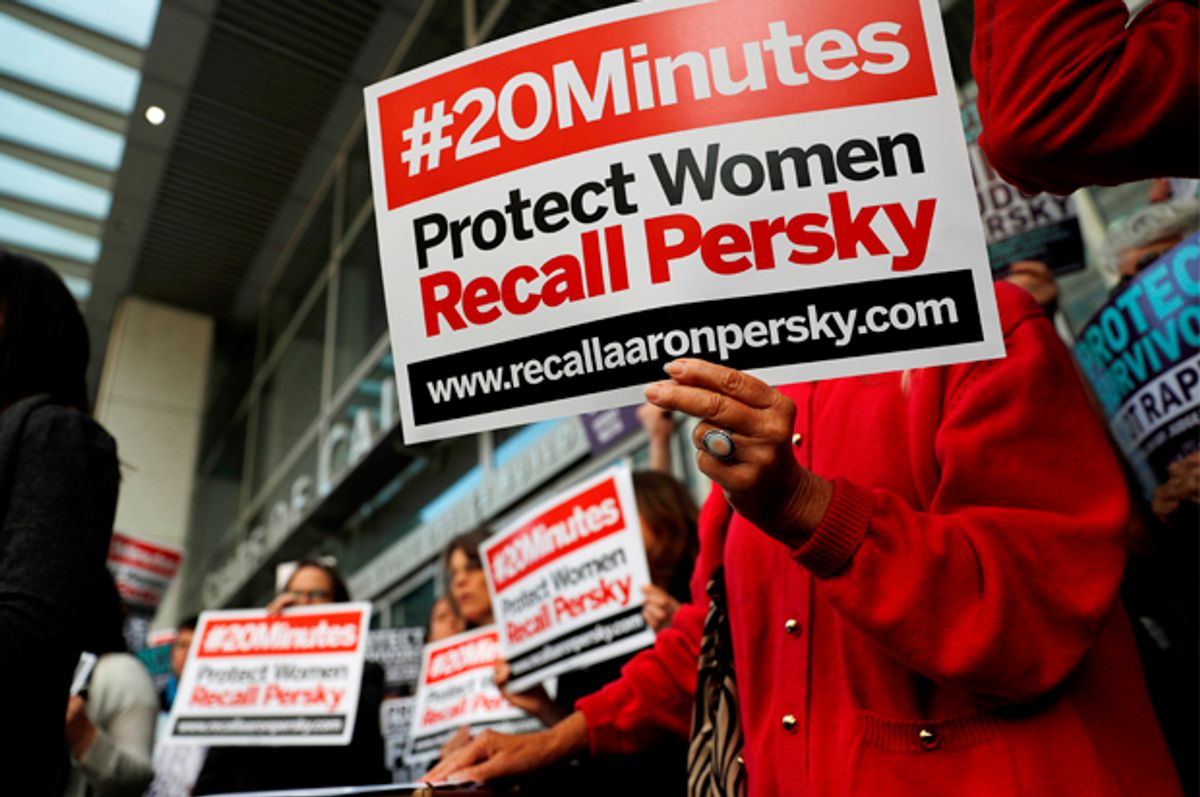 If you were seeking a fair and just individual to oversee an assault case involving a man an unconscious woman, you probably wouldn't think Judge Aaron Persky is your guy. And neither does the Santa Clara District Attorney.

Persky gained instant infamy earlier this month when, presiding over the sexual assault case of former Stanford student Brock Turner, he sentenced the convicted felon and future registered sex offender to a breezy six months in county jail and probation, saying, "A prison sentence would have a severe impact on him… I think he will not be a danger to others." Prosecutors had recommended a sentence of six years. Turner will likely be out in three months. A much shared statement from Turner's unnamed victim, who was unconscious during the assault, eloquently exposed the enduring toll of her assailant's actions and the "irreversible damage to me and my family," reminding the world where the real "severe impact" in this story rests.

Since then, Perksy's been in the spotlight in ways both reasonable and extreme. His office claims they've received death and rape threats against him and his family. But more appropriately, there have been serious calls for him to step down from his position — a process that's complex and unlikely. But what has happened — and offers some degree of hope that there is some measure of fairness somewhere in the system — is that Persky will not be the man deciding what happens to a former nurse accused of sexually assaulting a patient who was under sedation.

You can understand why Perksy's recent track record would give some cause for concern. On Monday, Persky made yet another questionable decision, dismissing a misdemeanor theft case against a San Jose woman in mid-trial. The case had already been raising eyebrows after ten prospective jurors refused to serve on a case with Persky presiding.

But it's Perksy's choice to dismiss the case entirely that seems to have been a tipping point. Tuesday, Santa Clara District Attorney Jeff Rosen issued a statement saying, "We are disappointed and puzzled at Judge Persky's unusual decision to unilaterally dismiss a case before the jury could deliberate. After this and the recent turn of events, we lack confidence that Judge Persky can fairly participate in this upcoming hearing in which a male nurse sexually assaulted an anesthetized female patient."

The case involves a 54 year-old former Kaiser Permanente surgical nurse who is charged with one felony count of sexual battery of a hospitalized person for allegedly fondling a woman's breasts and genitals while she was sedated. The office's chief trial deputy, noting the similarity of this case to Turner's told the Mercury News this week that "It is one of those situations where we think the victim is particularly vulnerable."

And while Rosen called the move "a rare and carefully considered step for our office," he added, "In the future, we will evaluate each case on its own merits and decide if we should use our legal right to ask for another judge in order to protect public safety and pursue justice." In other words, even if Persky doesn't step down — or even more unlikely, find himself officially removed from his job — there are still ways that he can be prevented from having the opportunity to give a light punishment for a serious crime. He may not lose his position, but no one's forgetting any time soon that he's lost his credibility.