The Showtime drama wanted so badly to be Victorian that in the end, it forgot to be true to its heroine 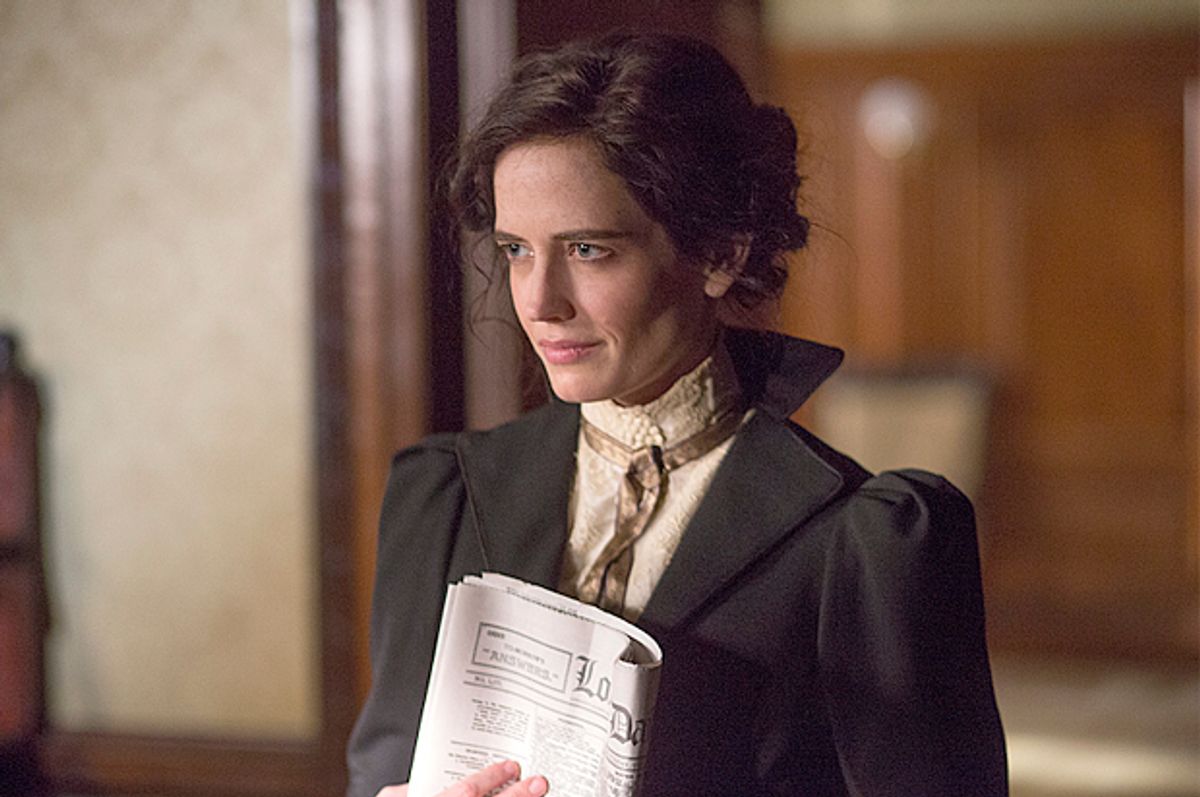 In last night's series finale of “Penny Dreadful,” Vanessa Ives—who had collapsed in recent episodes from the nuanced powerhouse at the center of supernatural London to the sort of two-dimensional Gothic heroine that inspired her—meets her maker. Quite literally, in fact. Her almost-lover (and long-fated protector) Ethan returns to London to save her from her bargain with Dracula, only for her to announce sadly that she can't be saved. After Ethan shoots her at her own request, she collapses in his arms, her filmy white gown billowing around her, and announces happily she's seen The Lord.

It's a marvelously Gothic image. And it's a terrible conclusion to Vanessa's story.

Since “Penny Dreadful”'s pilot three seasons ago, death has always been in the cards for Vanessa. That, too, was sometimes literal, thanks to her tarot cards—one of this show's many visual touchstones for faith, and one of its many gleeful touches of Victoriana. As one might expect from a show named after cheap Victorian supernatural thrillers, creator John Logan delighted in all the trappings of its nineteenth-century inspirations: this London was packed with sinister ballrooms, crooked alleys, blood-spattered theaters, foreboding museums, and gruesome waxworks. Vanessa and company were haunted by shadowy specters and witch spells and millenia-old prophecies from a possessed monk, and also by the inescapable ghosts of their own mistakes. (Again, sometimes literally; “Penny Dreadful” doesn't miss a trick.) It was a stylized darkness that reminded us our heroes were dealing with supernatural forces that were not only dangerous, but perfectly at home in an age where mental institutions were as bad as anything Hell could find. Whenever Vanessa was possessed by the Devil—which happened with notable regularity, as befits a penny dreadful—the first horror was always the moment you realized how easily the Devil handles Victorian small talk.

But what initially made the show such a success was the ways it used its Victorian trappings as restrictions for its characters to push against. Some of those archetypes were no-brainers that powered the archly Victorian side of things: Dorian Gray was fated to be a malevolent louche, and Vanessa's surrogate father Malcolm was a selfish Great White Hunter hollowed out by hunger for recognition. But some were allowed to struggle with the archetypes that spawned them: Victor Frankenstein's questionable parenting became a conduit through which “Penny Dreadful” examined the suffocating Nice Guy patriarchy, and Lily—his victim-turned-enemy-turned-victim—emerged from the early docile days of her afterlife as a virago bent on avenging every woman who'd suffered at the hands of a man.

The coup de grace, of course, was Vanessa Ives. Courted by the devil from outside, and haunted by the devil within, she was the series' unabashed icon. Anchored by a tour de force performance by Eva Green, Vanessa hides almost endless complexity. She's more terrified of happiness than of things that stalk the darkness; she can't admit to Malcolm that she's lonely, but she seeks out Frankenstein's Creature to debate theology and poetry (that old Victorian small talk). And though she suffered all-too-human doubts, her stony determination to vanquish the devil always materialized when all hope was lost. Anyone who's seen Eva Green's baleful stare doesn't forget it; this was a woman out to conquer.

Vanessa's faith was integral to her character. As a Catholic amid Protestants and skeptics, the rituals of her religion often crossed the line into protective witchcraft; her sigil was the scorpion, but she made the sign of the cross as often as she drew her talisman. Much of the third season (not to mention the series) has been devoted to the tension between Vanessa and that faith: whether it's enough to save her, how much of it she can compromise and still keep her soul. And after losing her faith last season, she starts to see psychiatrist Dr. Seward to try to find strength in herself. (In true Victorian form, the therapist is the descendant of the good witch who'd changed the course of Vanessa's life...and looked exactly like her.) The season's fourth episode, "A Blade Of Grass," overtly answered the question of how far Vanessa's come by trapping her in memories of her time in the asylum, and revealing that the Devil was haunting her in ways she didn't remember at the time. At the climax of the episode, she staunchly confronts both incarnations of the Darkness. She's at her nadir, exhausted from Victorian medical torture and trapped inside her own mind, but when the Devil asks how she dares defy him, she has an answer: "I am nothing. I am no more than a blade of grass. But I am." It's enough; she wins.

This isn't the same woman who, three episodes later, shows up at Dracula's doorstep to kill him and succumbs forever less than five minutes later. So what happened?

In an object lesson for adaptations everywhere, the meta-narrative of Victoriana simply overtook its characters. It's happened before that the series' love of Gothic trappings swallowed individual psychology and subversive narratives; Malcolm's partner Sembene never rose above the Mystical Other stereotype. But though Logan's fascination with the dark side of Victoriana had served the story well in the past, it seems that in the end, the needs of the Gothic outweighed its own heroine's journey. It's not that she died; it's been understood since Vanessa stared down her first vampire that this was dangerous work and death lurked around every corner. It's that what happened to her was a defeat for the sake of another archetypal narrative; it's that, in a show that's been so fixed on the idea of women wielding power, the patriarchy won in overtime. When Vanessa can't resist Dracula, it's not because her character is struggling—it's because we know Dracula always wins fair lady. It's because the Gothic heroine who's tasted of the dark is doomed.

Does Vanessa find agency in her death? Yes — as Logan himself explained to Variety, her choice pulls back the End of Days. But it has shockingly little emotional power. Vanessa disappears from the two episodes leading up to these finale moments, leaving others to fight the battles while she waits in an actual ivory tower for her saintly end. The moment is tragic — the death of a heroine is always meant to be tragic — but the scene seems cut from a different story than the season's first half, and the overall effect of her death is merely bafflement.

It's not as if the show is unaware of the power of its own subtext, either. In the penultimate episode, the captive Lily convinces Victor to abandon Dr. Jekyll's complacency serum and let her go, explicitly claiming that even scarred and suffering women deserve to be themselves—nothing more nor less—and to live however they can. On a technicality, the show delivers that for Vanessa, who chooses her death. But the Vanessa who was a blade of grass is already long gone, and with it goes much of the series' power. “Penny Dreadful” was at its best when using its most complex characters to poke holes in the Victorian patriarchy; in the end, it wants so badly to be Victorian (a funeral, a Creature, a Wordsworth poem whispered at a grave) that it forgets to be itself.

Religious faith is always going to be a tricky narrative to resolve. A handful of other shows are tackling the fall from grace and its aftermath, and all have had to negotiate how much space to devote to old-fashioned ideas of religion as protection: “Lucifer,” “The Leftovers” and “Bates Motel” question the limits of faith in a world filled with flawed humanity. “Penny Dreadful” engaged Vanessa's faith with the gusto of a show that planned to tackle the theological gauntlet—and when faith failed her, it turned to a blithely Satanist idea of free will as the ultimate master, and belief in oneself the ultimate religion. It was an incredible setup for the final showdown between good and evil. But for all its good intentions, “Penny Dreadful,” like so many other Victorian stories, just couldn't resist a damsel in distress.