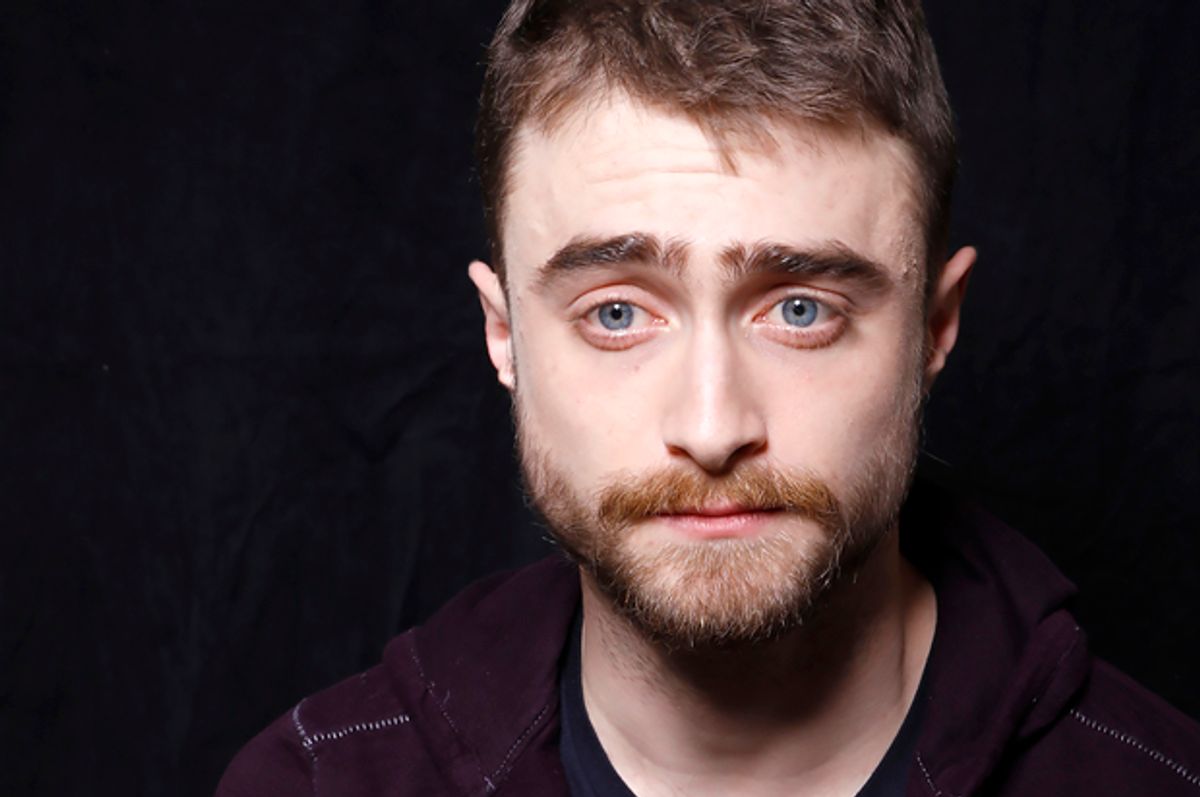 With his role as a farting corpse in “Swiss Army Man,” Daniel Radcliffe takes on a part far removed from “Harry Potter.” It follows this talented young actor’s distinctive performances that include a stage role in “Equus,” his portrayal of Allen Ginsberg in “Kill Your Darlings” and even his turn as Igor in last year’s underrated “Victor Frankenstein.”

In “Swiss Army Man,” Radcliffe plays Manny, the farting corpse that washes up on shore where the castaway Hank (Paul Dano) is about to kill himself. Hank resists suicide, and instead, rides Manny like a jet-ski. Cue opening credits.

Radcliffe gives a literally full-bodied performance, as the title character. He bares his ass whenever Hank needs some gas propulsion, spews water out of his mouth so Hank can drink (especially after carrying Manny around on his back), and is ruled by his joystick of a penis. The actor spoke with Salon about playing Manny and all the weird and wonderful work that involved.

With this film, have you actively tried to distance yourself from Harry Potter? What appealed to you about playing a farting corpse?

That’s the thing; I’m absolutely not trying to distance myself. It’s in other people’s minds. I have no desire to make people forget about "Harry Potter." It’s part of my life, and I am proud of it. But I do want to do interesting and different work. I was never going to play Harry forever. This was a chance to do something crazy and different. Part of it was I got to page three where Hank rides Manny across the ocean like a jet ski. If I saw Paul Dano ride someone else, I would have felt I’d really missed out. I was an easy sell on the script. It was funny, well written and fucking ambitious. It was aiming for funny stupid and mad and anarchic and was profound and sweet and moving and incredibly earnest at the same time.

Do you have concerns about alienating fans with such a career move? I think my nieces who adore “Harry Potter” would be taken aback by “Swiss Army Man.”

I don’t think you can make decisions based on what you think people want you to do. It’s doing what I enjoy and what I am passionate about. Towards the end of “Harry Potter,” I did “Equus,” and I feel like if you survive that moment, and I didn’t alienate you then, then I’m not going to alienate you now. Either the fans won’t watch me, or they’ll think I was doing something interesting and are supportive. If you want to drive yourself crazy in this industry, you can plan for what other people think you should do, or worry about other people’s perception.

You have terrific deadpan comic delivery as Manny, but what is extraordinary about your performance is your sheer physical qualities. I think it’s hilarious when Manny is splayed out in the forest, or can’t keep his head up in the cave. I know there was a stunt Manny. How did you develop the character’s comic timing and contortions?

I’m proud to say it was mostly me. The physical challenge was why I wanted to take the job. There is so much comedy in that, and I like to think I’m good at falling over and doing stupid physical comedy. A lot of it was Paul and I choreographing the scene. There’s a certain moment when I look at Sports Illustrated, so we worked out when I would slip and fall over or nudge my head to work out the language of each scene. We rehearsed at first, but then it was super easy because Paul and I knew he would do something and I would react in a way that was appropriate. We improvised with each other by the end.

Manny’s bromance with Hank is what keeps the film compelling. Can you talk about how you actively worked with Paul Dano—or even against him—to help each other perform so well together?

I think at first Paul’s character is uncomfortable with the idea that Manny is a dead guy, and that [Hank] may be crazy, but then there is a physical ease. I loved working with Paul and I really felt I was there to not fuck up Paul’s shots, because he carried so much of the film. The emotional weight of him talking about his father…so I was there to support him and help him, and not be too much of a heavy fucking lump to carry around.

The film’s messages are about being weird, but also comfortable in your own skin. Can you talk about how you are weird, and what makes you comfortable doing all the strange things in “Swiss Army Man?”

How am I weird? I think I’m weird in a bunch of ways, but everyone does, and they think their weirdness only applies to them. “Swiss Army Man” is about making them not taboo, and identifying with others—that we are not alone in our weirdness. That helps with self-acceptance and that helps us love and be loved. That message is in the film, but there’s also a farting corpse jet-ski thing. Profundity and ridiculousness working under the same banner—that’s why this film is exciting and unique to me. [Co-writer/director] Daniel Scheinert gave a description of the film as “an olive branch from the weirdos to the closet weirdos.”

Can you talk about the special effects—Manny spewing water, farting, getting erect and the challenges of that work? Was there a point where you drew the line?

[Laughs]. I never drew that line in this film. There’s one shot where I offered my ass out to them. They thought that would be fine. The special effects by Jason Hamer are practical. He created the mold of my butt, and they put a pipe in so they could blow air into a prosthetic butt that farted. And the water spewing was something he jammed into my mouth and operated off camera. There was an animatronic dick that acted as a compass. There is something incredibly funny having an animatronic penis being operated off camera.

“Swiss Army Man” has an important message of love, and doing what makes you happy. In fact, there is a beautiful thought that helps the characters keep going. What thoughts keep you going?

Getting to work and being on film sets. I love working on set. It’s a place of immense comfort for me. That’s my joyous space. I also love my friends and family—not an original answer, I know—but that’s what I live for. Hanging out with them and just watching TV.

The film also addresses issue of fear. What scares you, or what are you afraid of?

I supposed I’m afraid of getting older like everyone is. And the idea that I won’t be able to do things I do now. Like all actors, I have a fear that a guy in a suit will arrive and say I won’t get to make films anymore. That’s my fear: If anyone takes away my job.

If you were stuck on a desert island, what would you want to have with you to survive?

I feel I would be OK if I had some way of playing music. And I had 10 albums I could last without going insane. That would be my luxury item. And a knife or spear for catching food.

What music do you listen to?

I’m excited by the Libertines’ most recent album, and M. Ward, who’s fantastic.

I‘d take the Beach Boys. I like being on the beach and listening to “Good Vibrations.”

If you had a special power, as your farting corpse does, what would it be?

Given all you have done in screen so far, what role do you want to take on next?

I’m doing a play in New York that’s about to open called “Privacy,” which I’m excited about. And like every actor, I have aspiration to direct. I’d like to write as well. I’m in no rush though. I’m happy to carry on acting. I don’t know what’s going to come up next. I can’t predict, but three years ago I never thought I’d read “Swiss Army Man.”