Salon talks to the co-stars of the new film about baseball, why actors don't have hobbies, and their big secrets 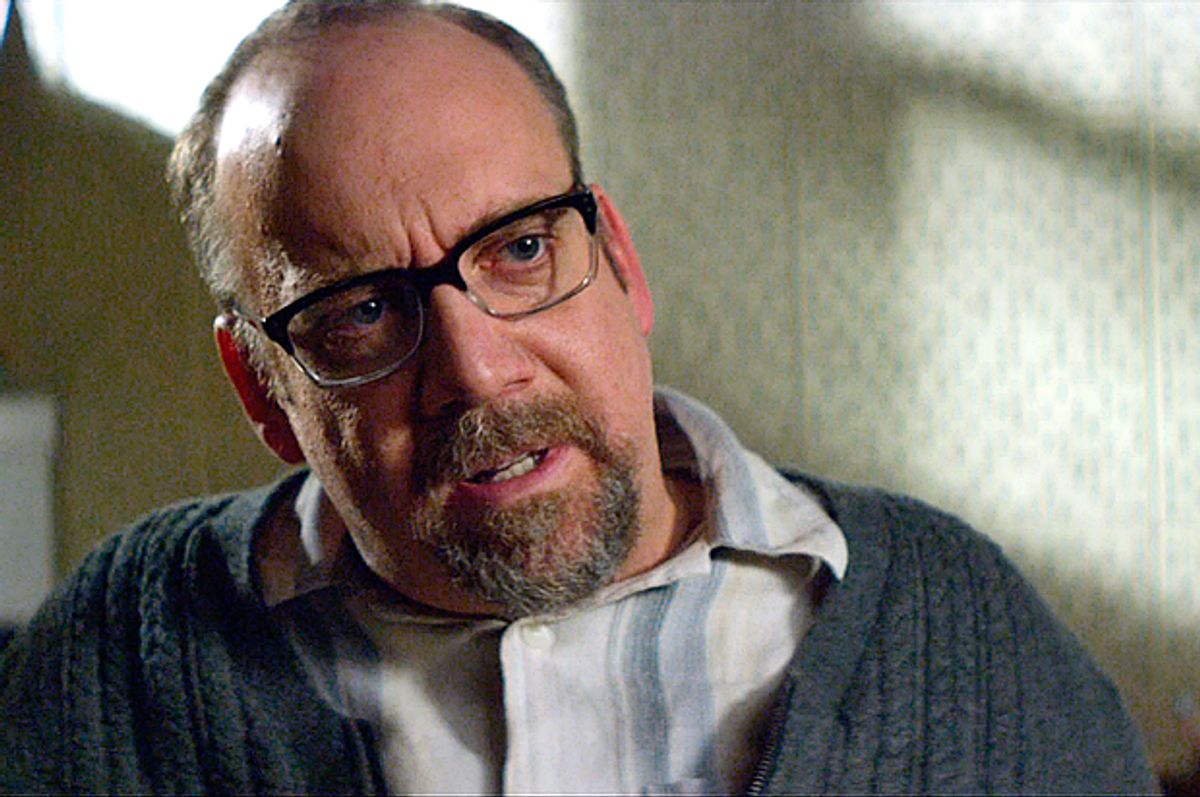 The title character in the sleeper indie “The Phenom” is Hopper Gibson (Johnny Simmons), a teenage pitcher who is being groomed for the major leagues. As writer/director Noah Buschel’s (“Glass Chin”) modest but powerful film opens, Hopper is talking to Dr. Mobley (Paul Giamatti), a mental skills coach. Mobley helps players with “issues” regain their focus, and many of Hopper’s issues stem from his being bullied by his abusive ex-con father, Hopper Sr. (Ethan Hawke).

Giamatti and Hawke play “good cop/bad cop” throughout “The Phenom.” Buschel stages the film as series of mostly two-handed exchanges between the main characters, generating tremendous emotion in the process. “The Phenom” scores because Giamatti and Hawke are deeply immersed in their roles. As Hopper Sr., a character described as a “warped, macho man,” Hawke gives a vivid, indelible performance as the film’s villain who taunts his son—as when he makes Hopper run suicides for smiling on the pitcher’s mound. In contrast, Giamatti is like a comforting blanket, coaching Hopper to relieve some of his pressure and get his bliss back. However, Mobley is masking some buried pain himself.

The two actors spoke with Salon about their characters and “The Phenom.”

Was there ever a baseball player you followed passionately?

Giamatti: I was obsessed with the Detroit Tiger’s Ron LeFlore. He went to prison for armed robbery and played in prison!

Hawke: My favorite player was a catcher for the Texas Rangers, Jim Sunberg. I had his poster on my wall as a kid. I don’t know why.

Paul, you have played twitchy characters that get all worked up, but here you play a man who helps Hopper calm down. How do you manage your pressures and emotions in your life?

Giamatti: Is that all I play? It’s curious with actors. You channel something specific, and it doesn’t have anything to do with your real life. Maybe I get it all out in my parts? I just try to ride out anxiety. Sure, I get nervous, but I think I manage fine.

Ethan, your character is all big emotion. But he restricts his son from showing emotion. As such, your performance, while showy, is really scary. How did you tap into playing Hopper Sr.?

Hawke: Whenever I’m at my best, it’s because the writing is high quality. Noah wrote this part really well. When I read it, I wanted to play it. I knew it would be easy, because there’s something true about this character and it was alive in my imagination immediately. What’s hard is generating that in your imagination yourself.

“The Phenom” has the title character working through failure. How do you deal with that as an actor?

Hawke: As a performer, I relate to the pressures athletes feel. They are performing in a similar way. It’s a pleasure to watch them excel and overcome fear and anxiety, and tortuous to watch them not play as well as they can.

Giamatti: Their success is so stark: It’s measured in if you won or lost. It's harsher, I can identify with that…

Hawke: With us, as actors, there is flexibility and interpretation. One person might hate my performance but another person might love it.

Giamatti: Yes. It’s all a matter of interpretation…

What about pleasure? One of the questions Mobley has for Hopper is about finding the enjoyment of the game. What do you enjoy about acting, and what do you enjoy that is not acting?

Giamatti: What I like about acting…that is a big, hard question… I don’t have hobbies… Traveling? I‘d rather be working than doing a hobby. As an actor, you pick up a hobby when you’re not working that much.

Hawke: My family and friends. All the really simple stuff. We [actors] are in a luxurious position. Others have passion for hobbies because they don’t have passion for their work. My dad was good at what he did, but he didn’t love it. I love what I do.

Both Mobley and Hopper Sr. want to bring out the greatness in Hopper. But they have different approaches. What do you think about the approach each one takes to help Hopper?

Giamatti: I think with Mobley, the approach is dealing with Hopper’s loss of joy, and the way to make him effective is to give him back something that gave him pleasure, so it doesn’t matter if the team wins or loses. Give back the dimension of when he was younger and enjoying the game, things that were chipped away by money, and pressure. He needs to be more relaxed. I think the kid is not a machine. He’s a lovely, sensitive guy. Not the sharpest knife in the drawer, but a good guy. [Mobley’s] a good prescription, a nice way to gain control of him. That approach doesn’t always work. The alternative, the sweat and hammer approach, has had good results in history.

Hawke: People learn so many of the wrong things—they have so many blind spots. Hopper Sr. believes he’s doing the right thing because he finds the world cold, harsh, and horrible. He’s trying to prepare his son to be the best. Would I parent my son that way? Absolutely not! But I know that man.

The film has long talky scenes that are really compelling. How did you approach these very theatrical speeches and interactions?

Giamatti: I find long, single takes, where you get to act, very pleasurable. You see more of our body [language]. I find it not easier, but more enjoyable than when they chop scenes up.

Hawke: It lets your self-conscious work; you disappear into your part.

Giamatti: It allows everything to flow…

Ethan, your character has trouble with the law. Have you had any brushes in real life that you drew on for that for playing Hopper Sr.?

Hawke: Not that I want to talk about. I have four kids. I can’t talk about sex or crime. I have to be a role model.

Paul, your character is a therapist. Have you ever sought counseling that you drew on that experience for playing Mobley?

Giamatti: I don’t want to talk about it, but I had a therapist once, and he was very helpful.

Hawke: Was that after working with me?