Is this a Pynchon novel or a documentary? "Tickled" goes from innocent fetish to globe-trotting crime thriller 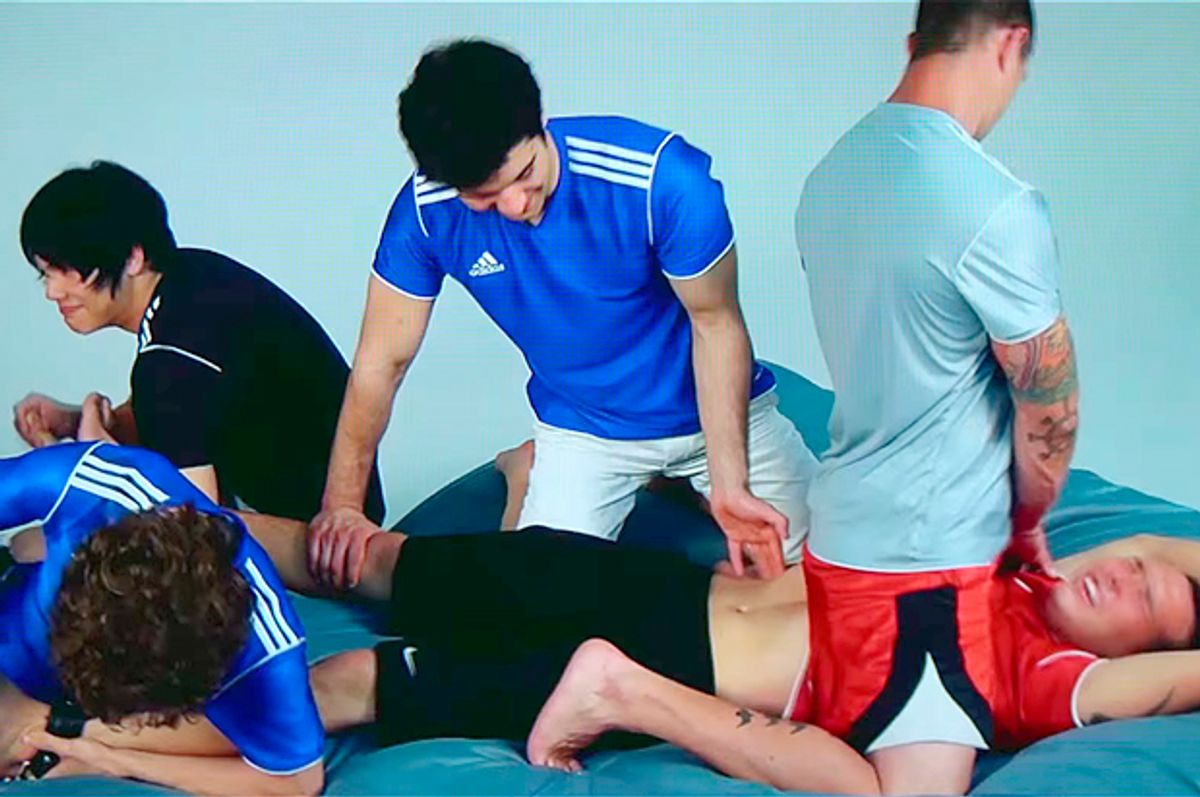 How much do you know about tickling — as a phenomenon in itself and, just to throw this out there, as a sexual fetish and a subgenre of pornography? How much do you want to know? Your first answers to those questions might be “nothing” and “absolutely nothing,” but the deeply strange rabbit-hole documentary called “Tickled,” from the New Zealand duo David Farrier and Dylan Reeve, may persuade you otherwise. This movie begins as a lighthearted exploration of a peculiar online spectacle known as “competitive endurance tickling,” in which athletic young men are paid to tickle each other on camera. But before “Tickled” ends it has become something entirely different, a globetrotting investigation in pursuit of a shadowy figure who can never be pinned down and may not exist, like the Orson Welles character in “The Third Man.” Except with tickling.

It might seem impossible to position “Tickled” as any sort of commentary on larger cultural or political concerns. For once, it doesn’t have anything to do with Donald Trump, although the story gets so bizarre and has so many switchbacks that I halfway expected him to show up at some point. (It definitely wouldn’t be surprising to learn that the international tickling-porn kingpin unveiled in this movie — no spoilers, I promise! — knows Trump or has done business with him at some point.) But there are farcical echoes of all kinds of bigger things in “Tickled,” from the money trails of the super-rich revealed in the Panama Papers to Hillary Clinton’s email ineptitude to the enormous gullibility of Americans in general. And perhaps young male Americans in particular.

As Farrier, the Auckland journalist who serves as the deadpan Kiwi-Michael Moore centerpiece of “Tickled,” observes late in the film, this isn’t a story about tickling. It’s a story about power and more specifically (I would add) about how easily ordinary people can give in to delusions and surrender power over their own lives. Wait, did I say this movie wasn’t about Trump? I take that back.

When Farrier, who typically reports on whimsical entertainment and lifestyle stories for New Zealand television, first noticed “competitive endurance tickling” on the internet, he assumed it was the sort of odd mini-trend that fit into his natural wheelhouse. Groups of young American guys, mostly in the college-wrestler or swim-team vein, were showing up in videos tickling the heck out of each other in motel rooms, apparently at the behest of a company called Jane O’Brien Media. Maybe it was for money and maybe it was for kicks, but it seemed like a strange but essentially harmless pastime. Farrier sent an ordinary journalistic query to Jane O’Brien Media and received a stream of vicious emails in response, insisting that the company did not want to associate its wholesome videos with a “homosexual journalist” and his “homosexual lifestyle.” Its wholesome videos of handsome, athletic young men tied down and tickled on hotel beds. (Farrier is gay, but it’s not much of an issue in his professional career. He doesn’t work in LGBT media and does not focus on LGBT material in particular.)

Any journalist, and indeed any human being, would have the same reaction at that point: What in the name of the living Christ is going on here? Arguably Farrier and Reeve, his slightly truculent sidekick and co-director, play dumb vis-à-vis the audience a bit longer than they should, so I’ll cut to the chase: It becomes obvious early on that Jane O’Brien is at best a ghost or a fiction, but the slowly unfolding question of who is really funding and producing these bizarre tickling videos, and why, is like opening a Russian nesting doll stuffed with layers of used condoms.

The notional O’Brien or her notional assistant or whoever sends three representatives all the way to Auckland on first-class tickets to dissuade Farrier and Reeve from pursuing the global tickling empire any further. And those guys are, well, remarkable. What do you think the people hired to shield an international tickling-porn kingpin would be like? Lawyers are engaged to threaten and harass the filmmakers, in California and New York and New Zealand, and so are private investigators. It’s like the weirdest and least plausible imitation-Hitchcock thriller of all time: You start by asking questions about an innocent-seeming online fetish site, and you wind up months later in the frozen post-industrial wasteland of Muskegon, Michigan, talking to a former mixed martial-arts fighter with a pencil mustache who spent several years as the chief recruiter for Jane O’Brien’s secret “tickle-torture cell.”

It’s not at all clear that tickling is ultimately the point for the person who, under various names and premises, has been soliciting and funding guys-getting-tickled videos online since at least the mid-1990s. It seems like it’s more about what happens after the tickling stops, which is also when “Tickled” stops being hilarious. Terri-Jane’s original model worked like this: She gets the attention of some bored college athlete at a sub-elite school who wouldn’t mind having a new laptop or an Xbox or some concert tickets or just $1000 in cash. She says she’s going to send him that stuff, and she does. Oh, by the way: Is he ticklish? What about his buddies? Would he mind making a video in the dorm with a few of them? Sure, it’s a little weird, but it’s definitely legal and it’s definitely not gay. Oh no, no, no. If the videos come, more gifts follow.

By the current decade, Terri-Jane’s operation has moved on to professional adult-film production facilities in L.A. and, according to the Muskegon MMA informant, outsourced tickle-shops in at least five American states and three foreign countries. But in all cases the endgame remains the same: If you announce you want out, or complain about your name and likeness showing up all over YouTube and various porn-related sites as a notable tickle-enthusiast, all hell breaks loose. Links to your tickle videos will be sent to your mom, your girlfriend, your athletic coaches and your actual or potential employers. Denial-of-service attacks, apparently emanating from your IP address, will be launched against your company, your school, your sports program. Numerous websites will pop up, apparently established by you, proclaiming your unquenchable passion for guy-on-guy tickling. Only one former ticklee was willing to go on camera with Farrier and Reeve, a former college wide receiver from Southern California named T.J., who says his attempts to catch on in pro football were stymied by the fact that any Google search of his name reveals widespread evidence that he’s out and proud as a gay tickle fetishist. Tolerance in sports has come a long way, but … you get the point.

Farrier and Reeve only hint at the question that a lot of internet denizens of the 21st century will be asking themselves: Is this whole thing some kind of feminist revenge plot against the frat-boy/college-athlete demographic, cooked up by a woman or at least someone who claims to be a woman? Is it like "rape culture" symbolically turned against itself? You’ll have to answer that question for yourself by seeing “Tickled,” I’m afraid, but as with the questions I asked at the beginning of this article, the answer isn’t necessarily obvious. In any case, the tickling kingpin’s true goal is less to watch dopey dudes who have forgotten what their mothers told them about taking candy from strangers get tied up and tickled than to humiliate them later for their weakness and vulnerability, to make them pay over and over for drinking so deep from the poisoned chalice of tickledom. Is that a stupid metaphor for the stupid Trump electorate, or what?