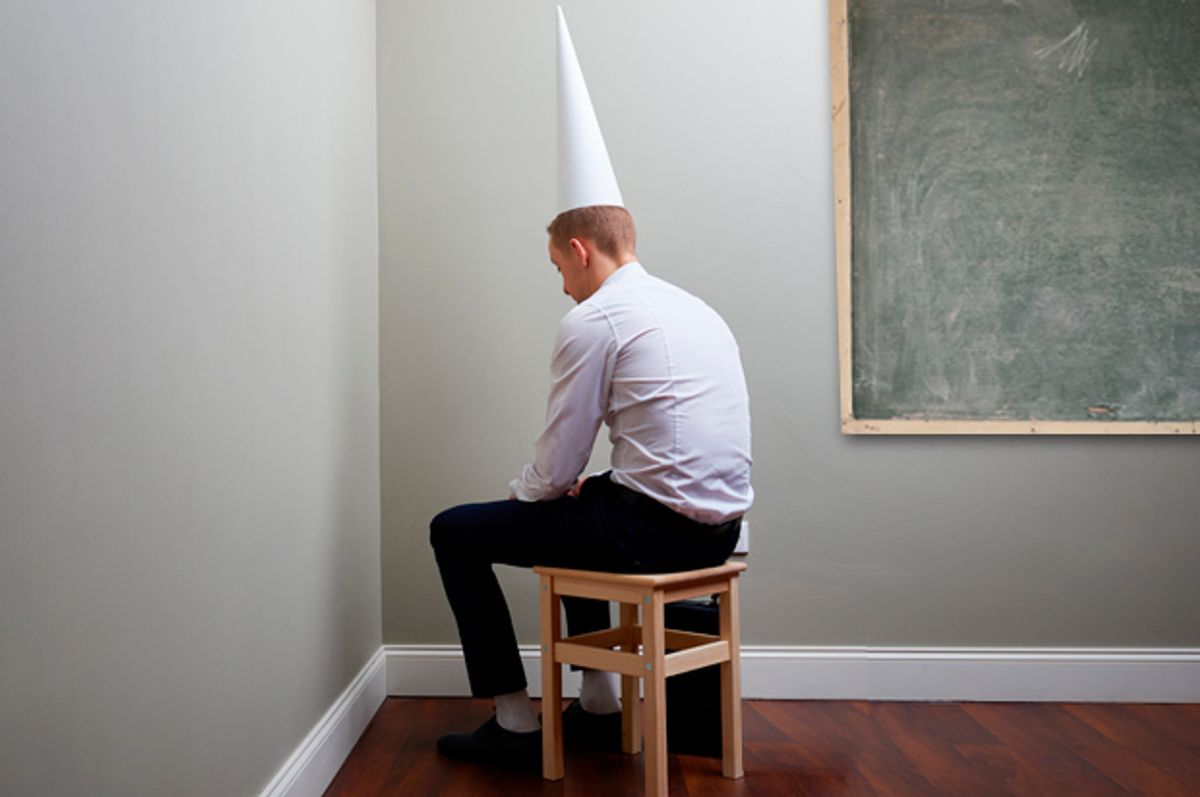 "We can all blow off steam, right?" observes the father of Hudson Deighan, a 16 year-old student at Rhode Island's Blackstone Valley Prep High School. "But how many of us are foolish enough to do it in a written format, on a work-sponsored platform?" You'd be surprised.

Parents, students and staff at the charter school were appalled earlier this month when a mass email went out from the apparently hacked account of a teacher with a link to a Google doc. There, according to the Providence Journal, readers found 18 pages of screenshots from Slack conversations in which teachers and staff cruelly disparaged their own students. Last week, Deighan, who says she's struggled with spelling her whole academic career, told the Journal about a particular teacher she'd come to think of as a mentor. "I thought I had a personal relationship with him. We’ve had conversations about life, our families. I trusted him." When she made an error, she said, "He’d just say, 'Oh, you spelled that wrong' and we’d fix it." Then she saw the Slack exchanges.

"Here’s how Hudson spelled Ta-Nehisi Coates: Tonahese quotes," he'd written on June 14, around the time of one of her weekly check-ins with him. Another teacher chimed in with an expletive, and calling her an "idiot." Deighan says that, "When I saw my name I just started crying. I thought I was straightforward with him and he’d be straightforward with me. But I guess he just doesn’t like me, and I guess none of the teachers like me at all…. It's just damaging to think that the people that are encouraging you are just behind your back saying, 'She can’t do it, she’s such a dumb ____.' I was building confidence, slowly and surely, but now they’ve wrecked that with a few messages."

In an open letter posted on the school's site, Executive Director Jeremy Chiappetta confirmed last week that "Disrespectful and disparaging written comments about students and families were allegedly written by some of our high school staff" and that an investigation was underway. "I want to be crystal clear," he added, "As the founding school leader, executive director of the organization, and parent of three scholars in the program, I am deeply saddened and disappointed. Parents put their trust in teachers and the school, and that trust has been violated." The school's board added a statement that "The remarks made by teachers are absolutely inexcusable."

There is a gallows humor element to almost any job — especially with a high stress and burnout factor. You'd be hard pressed to find a doctor or a cop who hasn't, especially in times of extreme duress, confidentially blown off steam to a colleague in a manner that might seem insensitive to outsiders. Yet in their casually vicious online conversations, the staff of Blackstone revealed a particular heartlessness — and cluelessness — that's simply inexcusable. The Journal reveals that in one exchange, a teacher wrote, "Man I wish we could hit them," prompting another to reply, "Move to Arizona. Though really no school districts allow, by state law you are allowed to. Start your own charter and commence with the flogging." In other comments, teachers called one parent a "loser" and said of another, "Lying ____ scum… I CANNOT WITH HER I HOPE HER STUPID SON FAILS ALL OF HIS CLASSES." The school has confirmed the authenticity of the comments. The Washington Post reported Friday that three teachers, whose names have not been released, have since resigned.

Deighan's father, who goes by the single name Scout, told the Post that his daughter "kept telling us that lots of students were having problems with the teachers. And we kept saying 'No no no, it can’t be as bad as you’re saying.' Then we found out it was worse. It was worse. That horrible scenario where you don’t believe your child and then you realize you should have been standing by them." He added, "That is a level of obliviousness around professional boundaries that scares me by itself. Second of all, you can blow off steam, but that’s different from just slamming teenagers for struggling,” he continued. “You can see, they called my daughter a f—— idiot for not being able to spell Ta-Nehisi Coates. That’s not blowing off steam. That’s a level of aggression and dismissiveness that should not be anywhere near the educational system."

As a colleague sagely observed Monday, "Always Slack like a Hulk Hogan damages jury is reading." The Internet isn't a new invention, guys. Your Facebook posts and your tweets — even if you think they are private — are easily obtained and shared. Your Slack conversations are, in case you hadn't noticed, likely taking place in your work environment. So don't say stuff within them that could get you fired. Seems simple — it is! It's called having unexpressed thoughts! Beyond that, though, if you really have that much contempt for kids, you don't deserve to work with them. And as toxic and petty and hurtful as those comments from the Blackstone staffers were, their students are ultimately very lucky they won't be under the guidance of the people who made them any more.