CNN can't sink any lower: Corey Lewandowski's hiring is an affront to our very democracy

Trump's ex-campaign manager has abused journalists at every turn, and Jeff Zucker is rewarding him -- handsomely 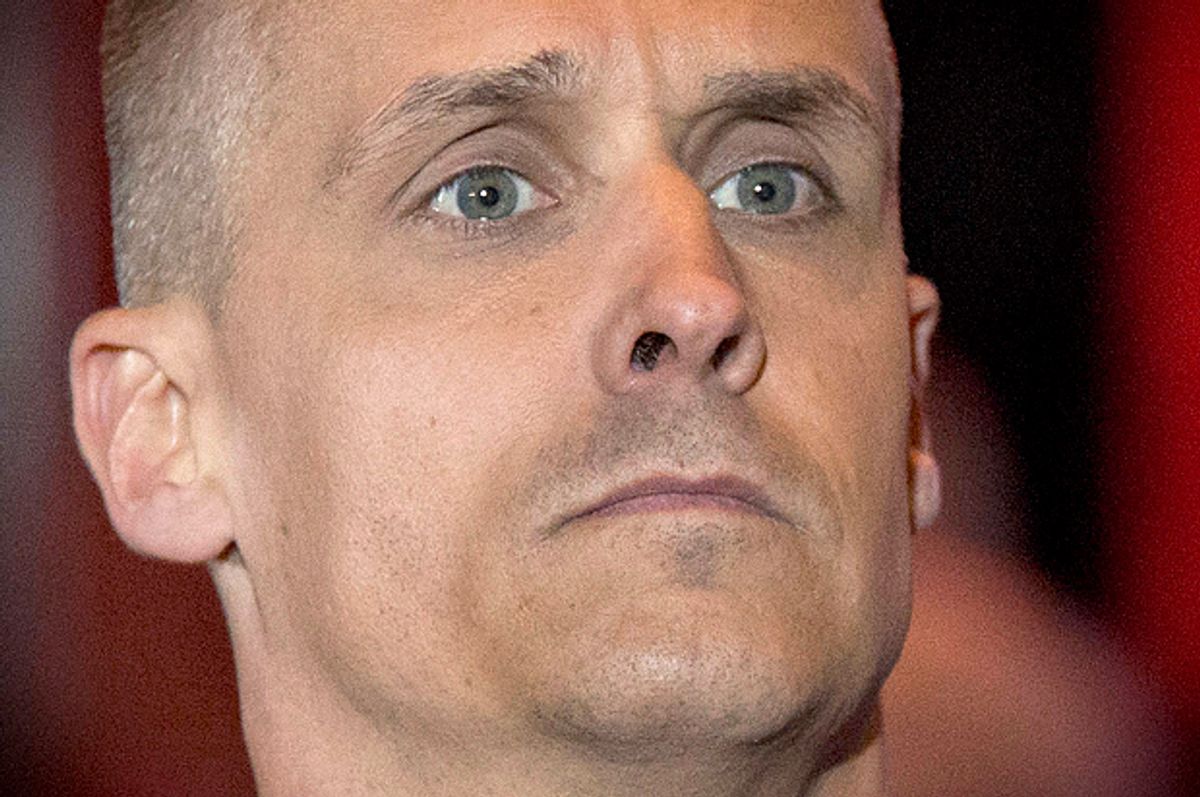 Suppose you turned to The Onion, America’s most pungent guide to the nation’s most gripping farce-reality-show hybrid, aka the political process, and saw this headline: “CNN Rewards Trump’s Ex-Campaign Manager for Lying to, Bullying Reporters by Hiring Him.” You’d think: Oh, what a crazy imagination satirists need nowadays just to keep up! To think that Corey Lewandowski, joined at the hip for 18 months to the most mendacious political candidate in memory, deserves a place on a news network!

Actually, not. That headline was from Slate, not The Onion, which made do this week with “Financially Struggling Trump Campaign Holds Fundraising Riot” and “Cash-Strapped Trump Forced To Replace Eric Trump With Cheap Migrant Son.” Goodness, how The Onionis getting a run for its giggle-inducing money this year. (However, it still reigns supreme in the Headline Hall of Fame with its Nov. 4, 2008, classic: “Black Man Given Nation’s Worst Job.”)

It’s curious that CNN has to reach so far down into the barrel to find another Trump supporter for regular commentary.

The “CNN Rewards” headline was affixed to an article on Lewandowski’s new job by Slate writer Ben Mathis-Lilley, who noted a report this week by the Associated Press that all Trump employees must sign nondisclosure agreements.

It’s curious, then, that CNN has to reach so far down into the barrel to find another Trump supporter for regular commentary. It’s especially curious given that CNN already has two other Trump supporters on its payroll. If CNN cared, they’d find no shortage of Americans to speak cogently and factually about every any issue under the sun, about political history or about you-name-it. But CNN is probably not looking to Lewandowski for commentary on the Trans-Pacific Partnership, Common Core, the nature of the nuclear triad, the Paris climate-change agreement, the abortion situation, affirmative action in Texas, or the destiny of immigrants.

No, what Lewandowski brings to the table is insiderness, his familiarity with the mind, habits and beliefs of the presumptive Republican nominee for president of the United States. So CNN has hired a commentator who not only has been shown on video to be muscling a Breitbart reporter who irritated him (he and Trump denied it, and the authorities declined to prosecute) but also shoved one of CNN’s own reporters trying to cover a Trump rally.

Lewandowski has even less going for him. Legally, he’s muzzled. As Mathis-Lilley noted in Slate, like Trump’s “Make America Great Again” cap manufacturer, the former campaign manager is “subject to a ‘legally binding nondisclosure agreement’ that prohibits him from disparaging Donald Trump or any member of his family. And this is someone who CNN is paying to comment on the ongoing presidential election, 50 percent of whose major-party candidates are Donald Trump.” In Lewandowski’s first appearance as a pundit on CNN, Friday morning, he declared that nondisparagement clause or no nondisparagement clause, he could be trusted to tell the truth about Trump.

(The AP noted that Hillary Clinton’s campaign also requires a similar nondisclosure agreement, though its exact words are not known.)

With the Lewandowski hire, this is the first time anyone has been hired to commentate on TV immediately after he’s been fired by his political boss.

This is hardly the first time that a TV network has hired a one-time political operative as a paid commentator. Karl Rove, Sarah Palin, and Mike Huckabee have toiled — or frolicked — in the Fox News vineyards. Chris Matthews, longtime staffer for congressional Democrats and speechwriter for Jimmy Carter, still hurls hardballs — or at least loud balls — on MSNBC. But I believe CNN has broken new ground. With the Lewandowski hire, this is the first time anyone has been hired to commentate on TV immediately after he’s been fired by his political boss.

Commentators and journalists are not innocent of political views. Nor should they be. The pretense of political virginity is a dodge, for the very choosing of subjects reflects an outlook, as does the choice of guests, language — even facial expressions. Everyone has opinions; the pundits we need most in public life are the ones who can give intelligent reasons for theirs.

Some commentators, like the man whose name is on the website you’re reading, have spent most of their careers not just taking positions but giving cogent reasons for them, which is what you want a commentator to do. It’s an educator’s job, or ought to be. Airheads need not apply, nor personalities whose idea of “coverage” consists of horse-race questions, dueling sound bites, gotchas, and the whole wooden marionette ritual of false equivalency. But the networks cling to the costume of objectivity in order to disguise the fact that underneath, they’re naked.

For a long time, when on-air networks were the only ones to be seen, that costume helped them justify their special position in the eyes of the Federal Communications Commission. And in the era of news fragmentation, even Rupert Murdoch finds the word “balance” as magical as it is cynically intended.

What a tightrope walker means by balance I think I understand. What a journalist means is something else again, since the tightrope is often suspended from liquefying stanchions on earthquake-prone ground. When the question is “What’s true?” there’s a lot that needs to be said, but equal time for flat-earthers is not helpful.

So what should a political background disqualify you for? After many years working for Bill Clinton, George Stephanopoulos has distinguished himself on ABC with a no-nonsense approach to questioning Trump, among other politicians. (I should disclose that in 2004 I auditioned as an occasional round-tabler on Stephanopoulos’s This Week. I flunked.

(I was not only too left-wing to be invited back, I foolishly brought quoted a government document, at more than sound-bite length, to the table to exhibit the flagrantly racist past of the Republican judicial nominee Charles Pickering.)

As for MSNBC’s erstwhile politician, former congressman Joe Scarborough, he may or may not be the most penetrating interviewer around, but he does know a good deal about how Washington works.

Some conservatives used to rail at the late Tim Russert, onetime staffer to Sen. Daniel Patrick Moynihan (D-NY) and Gov. Mario Cuomo (D-NY), who did a stint as NBC Washington bureau chief and hosted Meet the Press. He was frequently slammed for “liberal bias,” but even then a good number of those conservatives found Russert a good listener. Ex-CBS newsman-turned-right-winger Bernard Goldberg, for one, honored Russert for giving him an hour on NBC to talk about his book Bias: A CBS Insider Exposes How the Media Distort the News. Bending over backwards to insulate himself from the charge of “liberal bias,” Russert once put Rush Limbaugh on Meet the Press to talk about Iraq. When I questioned Russert about that booking decision, he told me that Limbaugh “speaks to 20 million people,” not, “He knows about Iraq.”

But now consider the networks’ problem, which is how to cover the serial liar-ignoramus Donald Trump while valuing the quality known as fairness over the quality known as truth. They’ve struggled to be fair to Trump in the way they construe fairness — that is, finding pundits who can reliably tick off the campaign’s talking points. Since Trump has run his own seat-of-the-striped-pants campaign, the string of reliable “consultants,” “staffers,” “advisors,” and “spokespersons” to represent him has been thin to the breaking point. So CNN executives may think that Lewandowski solves their problem. He can serve as a go-to surrogate for Trump himself, who cannot possibly manage all the on-air phoners he’s asked to participate in. Perhaps there’s also some viewer mileage in having a commentator who himself has become a media name.

If those sound like extenuations, not sound judgments, it’s no news that the business of television is the accrual of eyeballs. The news is no exception. And CNN cares most about beating its competition. Earlier in the campaign, as The New York Times’ Matthew Grynbaum reported, somebody in their control room must have thought that an empty stage awaiting a Trump appearance was better eyeball bait than a Hillary Clinton speech.

None of which is to say that CNN is indifferent to truth. Once a week, working with the Annenberg Public Policy Center’s FactCheck.org, the network’s Jake Tapper videotapes a three-minute segment assessing the candidates’ claims against the facts. (A recent segment shows Trump campaigning in California, trumpeting, “There is no drought,” followed by Tapper asking, “Is that true?” — then answering his own question with a refreshing, “No, that’s not true.”)

On Fridays, the segments go up on both the CNN and FactCheck.org websites. CNN has only put one of these on its air, but at least they do refer to these segments on their chyron scroll — the professional term for those words that crawl by at the bottom of the screen.

Given its Lewandowski hire, perhaps CNN will balance Tapper by sending out a new reality show. Call it: How Low Will They Go?