Secrets of "Blood Simple": The devious neo-noir classic is more complicated than it looks

Often imitated but never duplicated, the Coen brothers' thrilling 1984 debut is back in a glorious new restoration 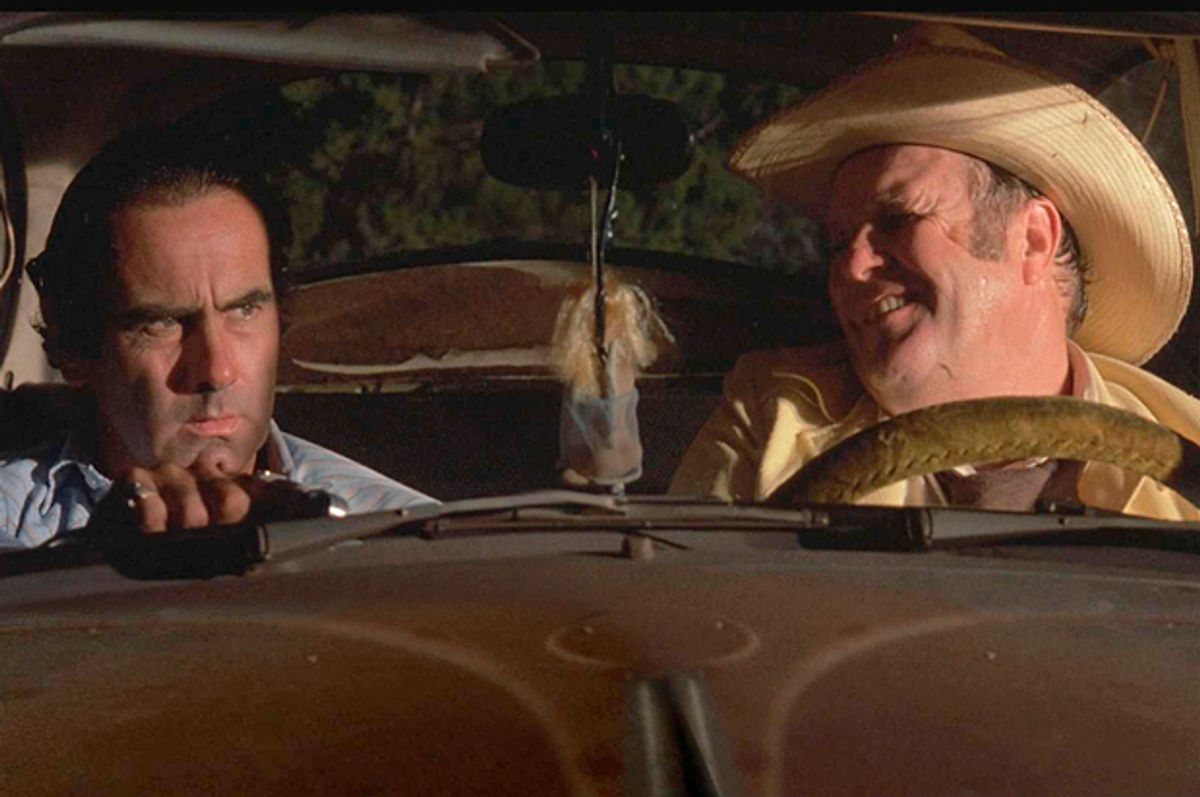 Here are some delicious nuggets of trivia I did not know about “Blood Simple,” the 1984 Texas neo-noir that marked the feature film debut of Joel and Ethan Coen. Usually I hate this kind of stuff, because most of the time it’s irrelevant. But each of these facts strikes me as integral to the success of the Coens’ epoch-shaping little movie. They are reasons why this devious and imaginative thriller worked as well as it did 32 summers ago, almost as much as the constantly shifting perspectives of Barry Sonnenfeld’s cinematography or Carter Burwell’s subtle, mood-controlling score. (Of the many Motown hits repurposed in ‘80s movies, I’m not sure any is as effective as the Four Tops’ “It’s the Same Old Song” in “Blood Simple.”) They’re reasons why it still works now, in a color-corrected digital restoration from Janus Films with a new 5.1 audio mix.

The phrase “Blood Simple” is never directly used in the film, although M. Emmet Walsh’s character, the sleazy, giggly and profoundly disturbing private detective Loren Visser, keeps hinting at it. (He calls people “money simple” a couple of times.) It comes from the Dashiell Hammett novel “Red Harvest,” when the nameless private detective known as the Continental Op complains about the town he’s supposedly cleaning up: “This damned burg’s getting to me. If I don’t get away soon, I’ll be going blood-simple, like the natives.” As the Coens have said, “Blood Simple” is closer to the sensibility of classic thriller writer James M. Cain than to Hammett, but that sentence comes close to summing up the movie.

Walsh’s ill-fitting leisure suit has peculiar bulges, as seen in the film, because he insisted that the Coens pay him in cash at the beginning of every week of shooting, and carried the money on him at all times. Whether that was method acting or a personality quirk is impossible to say. But it means that the scene when Loren stuffs thousands of dollars into his pockets, after double-crossing and killing Julian (Dan Hedaya), the man who has hired him to document his wife’s infidelity, is both something the character does and something the actor does. Ever since “Blood Simple,” there has been a strain of movie criticism arguing that the Coens are heartless technicians who don’t feel any empathy for their characters. That’s not without foundation, but this anecdote hints at the ways it’s overly simplistic.

Sticking with that theme, the Coens apparently had Loren drive what I believe is a 1968 Volkswagen Beetle in the film — a peculiar and deeply unlikely choice for a low-rent private investigator and/or hit man in central Texas — because they thought Walsh “looked like a bug.” Now, you can decide that’s Kafkaesque brilliance or you can decide that it drives you crazy because it’s manipulative and implausible. I’m not telling you what to think. But however you read it, the Beetle was an aesthetic choice, made while constructing an elaborate artifice.

The Coens denied any art-film intentions while making “Blood Simple,” which Ethan called “a no-bones-about-it entertainment” in a 1985 interview. “If you want something other than that, then you probably have a legitimate complaint,” he joked. OK, I get where he's going with that, but the Coens aren’t as far away as they like to pretend from the worldview of a director like Michael Haneke, who frequently confronts us with the fact that a movie is a constructed illusion rather than a depiction of the “real world,” and beyond that a shared illusion whose narrative and meaning are created by the viewer as much as by its maker.

These guys went on to make a series of movies, after all, in which naturalism and artificiality are in a constant state of crisis and collision. That breaks through the surface of the story most obviously in “Barton Fink,” but is just as apparent in different ways in “The Big Lebowski” or “A Serious Man” or “Inside Llewyn Davis.” (I’m not going to get involved in defending the Coens’ most recent movie, “Hail, Caesar!” right now, but it’s a work of mischievous genius, however badly miscalculated in marketplace terms.)

In a 2015 interview with Guillermo del Toro, Ethan Coen describes Walsh’s opening monologue in “Blood Simple” this way: “Emmet’s monologue is, like, ‘Let me tell you about the real world,’ and the joke is it’s not exactly the real world, but that’s the proposition.” As del Toro then responds, “I think that’s basically most of the filmography.” If it bugs you too much that Walsh drives a Bug, the Coens would politely suggest that you are likely to find other kinds of movies more to your taste. I’m not saying they wouldn’t say mean stuff about you after you’d left the room.

So what kind of movie did the Coens make, exactly? It seems that Barry Sonnenfeld, the brilliant cinematographer who also made his debut with “Blood Simple,” and would move on to become an A-list Hollywood director with “The Addams Family” and the “Men in Black” series, suggested that the brothers watch three films before starting work on this one. They were Stanley Kubrick’s “Dr. Strangelove,” Bernardo Bertolucci’s “The Conformist” and Carol Reed’s “The Third Man.”

I mean, arguably anyone should see those three movies before doing anything, or at least before assuming that they understand anything about human motivation or politics or the relationship between cause and effect. But all of them are present in “Blood Simple”: the anarchic, apocalyptic black humor of “Strangelove,” the bleak and beautiful fatalism of Bertolucci’s Fascist-era thriller and the devious, cynical philosophy of Harry Lime, Orson Welles’ unforgettable character in “The Third Man.” How a couple of nerdy Jewish guys from suburban Minneapolis, by way of New York City, combined those ingredients into a low-budget B movie made in Texas that both is and is not about its archetypal American setting, and is and is not a series of literary and film-school references — that part defies easy explanation.

Do the Coens, in “Blood Simple” and numerous other films, depict a cruel universe whose moral entropy leads people (normal and decent people, or the other kind) into bad decisions that never go unpunished? Is that a philosophy of life, or just a narrative contrivance gleaned from too many books and movies? Well, the answers are pretty clearly “yes” and “yes,” but watching this beautiful restoration of “Blood Simple” I was actually struck by how non-bleak it is, how much the strength of the film lies in images of beauty, defiance and survival. Even the despicable Loren laughs at fate as he dies; it’s almost an Ingmar Bergman moment, staged under the bathroom sink in a desolate Texas apartment. As in so many subsequent Coen pictures, Frances McDormand (not yet married to Joel Coen) embodies a transcendent female energy in this disordered tale of betrayal and murder, a combination of shrewdness, toughness and intelligence that can absorb many terrible things without being defeated.

In fact, it almost seems relevant that the Coens raised crucial seed money for “Blood Simple” from local members of Hadassah, the international Jewish feminist organization, in St. Louis Park, the middle-class Minnesota suburb where they grew up. That was a mitzvah, for sure, but I can’t help wondering what the do-gooder women of St. Louis Park thought they were contributing to, and what they thought of the final product. Maybe they got paid back decades later in “A Serious Man,” the Coens’ most autobiographical and most overtly Jewish film. And maybe they didn’t need to get paid back. “There’s not a moral to the story, and we’re not moral preceptors,” Joel Coen told del Toro. Not that I claim to understand Talmudic philosophy, or any other kind, but isn’t that pretty close to a moral precept in itself?

The new 4K restoration of “Blood Simple” from Janus Films opens this week at Film Forum in New York and the Alamo New Mission in San Francisco, and opens July 29 at the Nuart Theatre in Los Angeles, with more cities and home video to follow.